This rackmount beast claims to be the best way to record traditional valve amps without making a racket.

Sometimes a piece of gear comes in for review that’s so beautiful, we’re too busy making plans to elope with it to review the damn thing. This is not one of those products. Well, how can you covet something when you’re not even sure what you’d use it for? But after a few days in the Torpedo Studio’s company, we want one like a kid wants a puppy.

Hook this unit up to your favourite amplifier’s speaker output and, in theory, you’ll be able to capture that amp’s lovely, authentic tonal essence without the inconvenience of deafening everyone within a half-mile radius.

While acting as a dummy load to give the output stage something to push against – an essential safety requirement for any valve amp without a speaker connected – it converts your sound into the digital domain and runs it through sophisticated impulse responses (IRs) to simulate just about any combination of speaker, cabinet, microphone and recording space you could wish for.

Why is this better than just plugging a guitar straight into your DAW and loading up a modelling plug-in? Well, because this is using your real amp – all of it apart from the noisy bit at the very end. You get flexibility to rival the average software-only system, from changing mic placement to over-saturating your virtual speakers, not to mention adding compression, EQ and room reverb.

And all of this is happening on two channels, so you can record two completely different sounds on separate tracks… or even three if you use the untreated ‘speaker thru’ output to record your real-life cab at the same time. Oh, and here’s another option: set one of the channels to ‘dry’ for recording the pure sound of your amp to add cabinet emulation later.

Also on board are a selection of virtual power amps, so you can use the Torpedo Studio with a preamp pedal and leave real-world backline out of the equation altogether. There’s a daunting array of inputs and outputs on the back panel, including digital outs (S/PDIF and AES/EBU), but most of us will be sticking with the two XLR sockets for feeding it into our recording hardware’s analogue inputs.

Everything can be controlled on the little monochrome screen using a few buttons and a scrolling dial, but a better solution is to download the free Torpedo Remote software and hook the unit up to your Mac or PC via the included USB cable. Now everything is suddenly full-screen and full-colour, for much easier editing, and you also get the option of downloading more cabinets (for a few Euros each) from the Two Notes Boutique.

It takes just a few moments of level-tweaking before we have a perfectly usable, latency-free stereo sound coming from preset ‘Clean 1’. In fact there are plenty of nice tones among the presets – even if, as ever with such things, many are in need of some editing to get them just right.

Being able to do that editing on two separate channels is great for creating stereo blends – say, one side with a dynamic mic right up against a punchy 1×12, the other filling things out with a ribbon mic a few feet away from a 4×12 in a more ambient room.

Note that, while the presets have names like Crunch, Lead and Metal, these are guidelines rather than descriptions – this isn’t an amp simulator, so if you want high gain you’re going to have to provide it earlier in the signal chain. 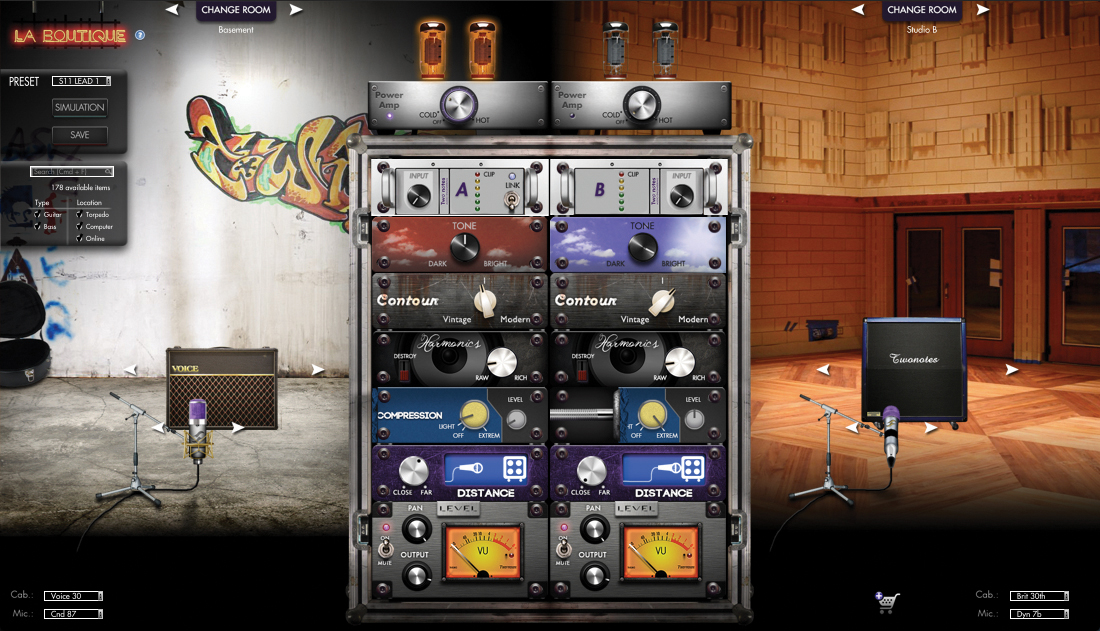 There are some fantastic sounds to be found here – in particular, our AC15-style combo running through a pair of Two Notes’ 1×12 cabs sounds more deliciously Voxy than anything this reviewer has ever managed to coax out of software alone. You may find that four or five good settings will provide all the sounds you could ever need, but there are lots more cabs available from the Boutique and you can also load up third-party IRs.

All of this is a doddle to navigate in Torpedo Remote, which looks a lot like a standard amp-modeller on screen. You get eight mics to choose from, with an interactive graphic that’s used for changing distance and angle, while compression settings and virtual recording spaces – from a totally dry studio to a cathedral – are just as easy to change. Then, switch it over to ‘arcade’ view and you can play with even more variables, including midrange contour and harmonic richness.

Among the most interesting tweaks on offer – particularly if you were paying attention during this month’s cover feature – is the ability to switch between a reactive and a resistive load.

The former type is designed to interact more realistically with an amp, and the result in this instance is a more bright and lively response that leaves the resistive option sounding a tad lifeless in comparison.

So what don’t we like about the Torpedo Studio? Well, we’re a little disappointed that, unlike some of Two Notes’ cheaper DI solutions, this one doesn’t allow you to apply any attenuation to the speaker output – it’s full blast or nothing. Also less than ideal is the lack of any jack outputs – you’ll need one or two spare XLR cables unless you prefer to keep things fully digital by working with AES/EBU.

Let’s end on a more upbeat note, though, with a handy tip that we discovered by mistake. It turns out those emulated power amps sound really good even with a signal that’s already been through a real one – adding a dose of single-ended EL34 can be a great way to turn a big tone into an absolutely walloping one. 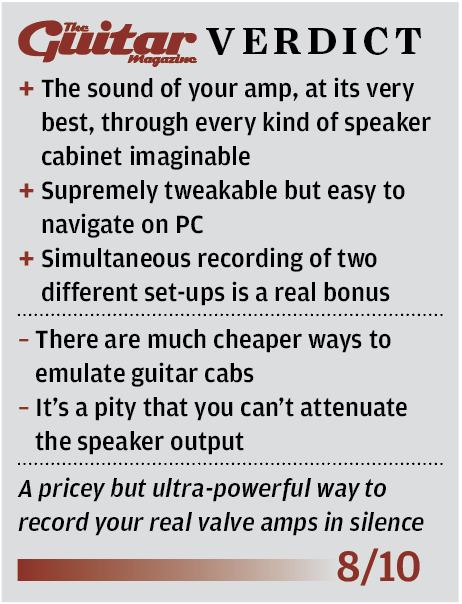