We have The Beatles to thank for the popularity of the sunburst Casino, but this custom-colour model from the psychedelic era is a collectible delight. 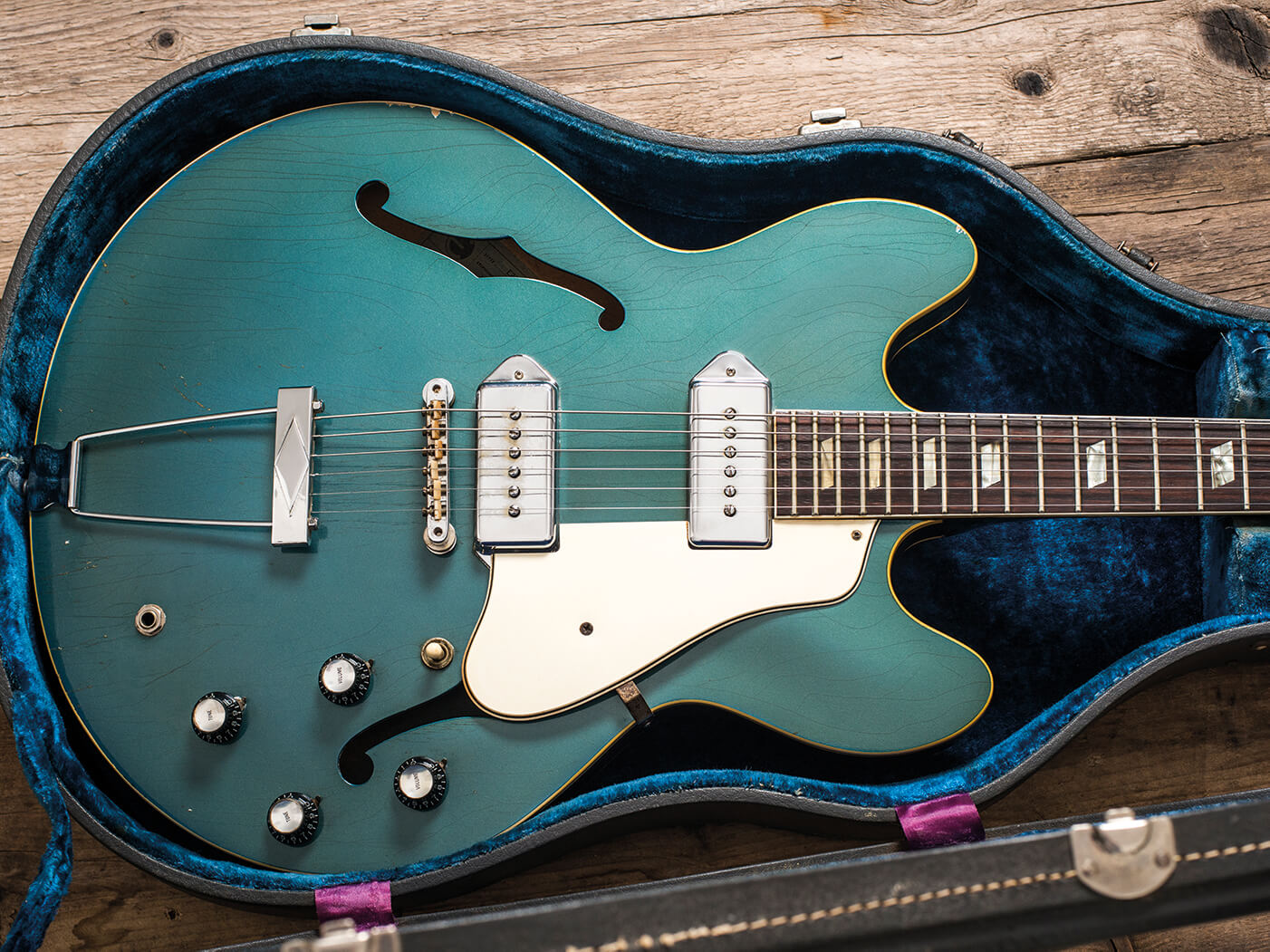 The Epiphone Casino, more formally known as the E230TD, is not an especially rare guitar. As a result, plenty of vintage examples are priced comparably to modern Custom Shop and boutique equivalents. However, unlike the standard sunburst and cherry paint-jobs, very few of the other 1,813 Casinos to leave Kalamazoo in 1967 were finished in this rare Pelham Blue metallic hue.

Traces of the white undercoat and original blue can be seen in the chips and heavily rubbed areas on the lower bout. Although Gibson described Pelham Blue as a ‘poly’ finish, it was actually an acrylic lacquer and they always sprayed clear nitrocellulose topcoats. Inevitably, the nitro has checked all over and yellowed, turning this Casino’s finish green to the extent that it’s close to Fender’s Ocean Turquoise. Looking under the pickguard for traces of the original colour, we are surprised to discover that it’s even greener under there. 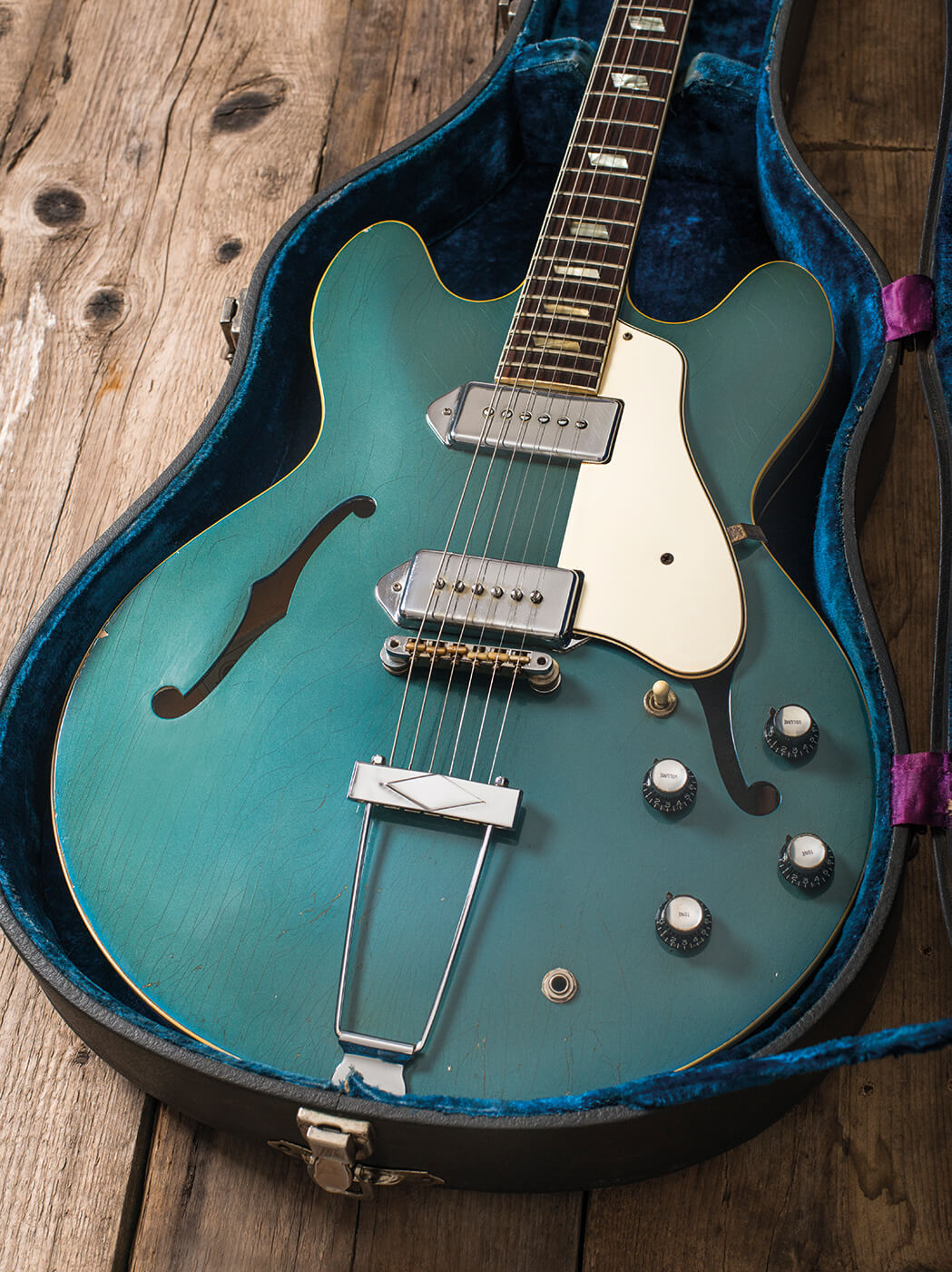 The only non-original parts here are the black reflector knobs – the factory fittings for a 1967 Casino would have been ‘witch hat’ knobs, but the previous owner swapped them because he preferred the earlier look. We tend to agree, but it turns out the original knobs are safely stashed inside the guitar’s case, which is also original. 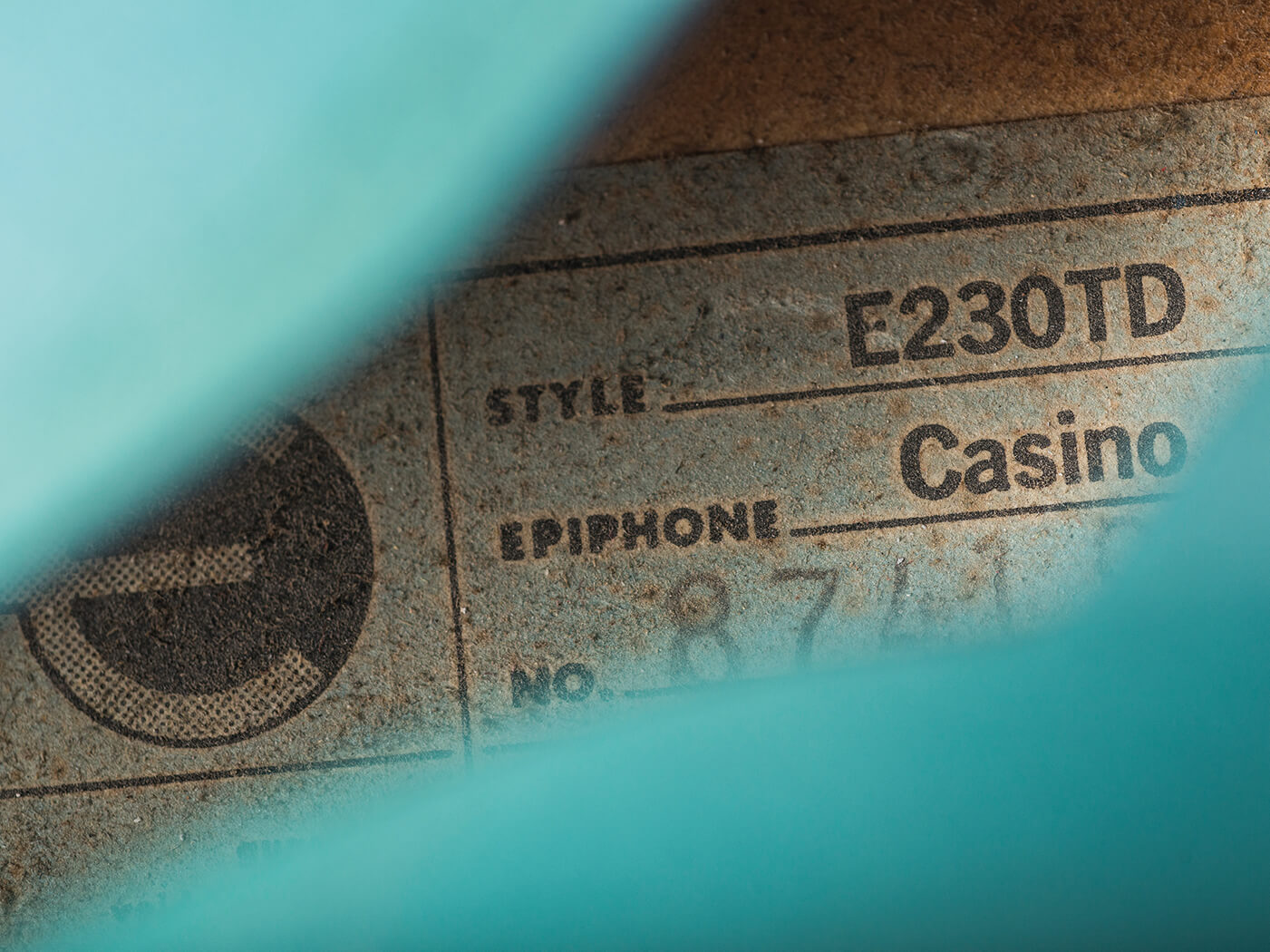 When new, the vibrant blue, bright chrome-plated hardware, white binding and pickguard must have been a striking combination. It still oozes charisma, although the binding has yellowed and the pickguard has veered towards the greenish parchment tone you often see on late-60s Fender scratchplates.

Coming off the Kalamazoo production line with fret-edge binding and period Gibson hardware and electronics, the Casino was clearly not a budget alternative for the essentially identical ES-330. Paul McCartney rates his ’62 Casino as his all-time favourite electric and John and George must have agreed, because they each bought Casinos, too. The British beat boom bristled with Casinos – Keith Richards, Brian Jones and Dave Davies were all fans of the Epiphone hollowbody.

Since Gibson and Epiphone had already been making some of the world’s finest archtop instruments for decades, our expectations for the Casino’s unplugged tone are high. It doesn’t disappoint. This is a naturally loud and full-bodied guitar, with impressive sustain compared to some other ES-330s and Casinos of a similar vintage that we’ve encountered. 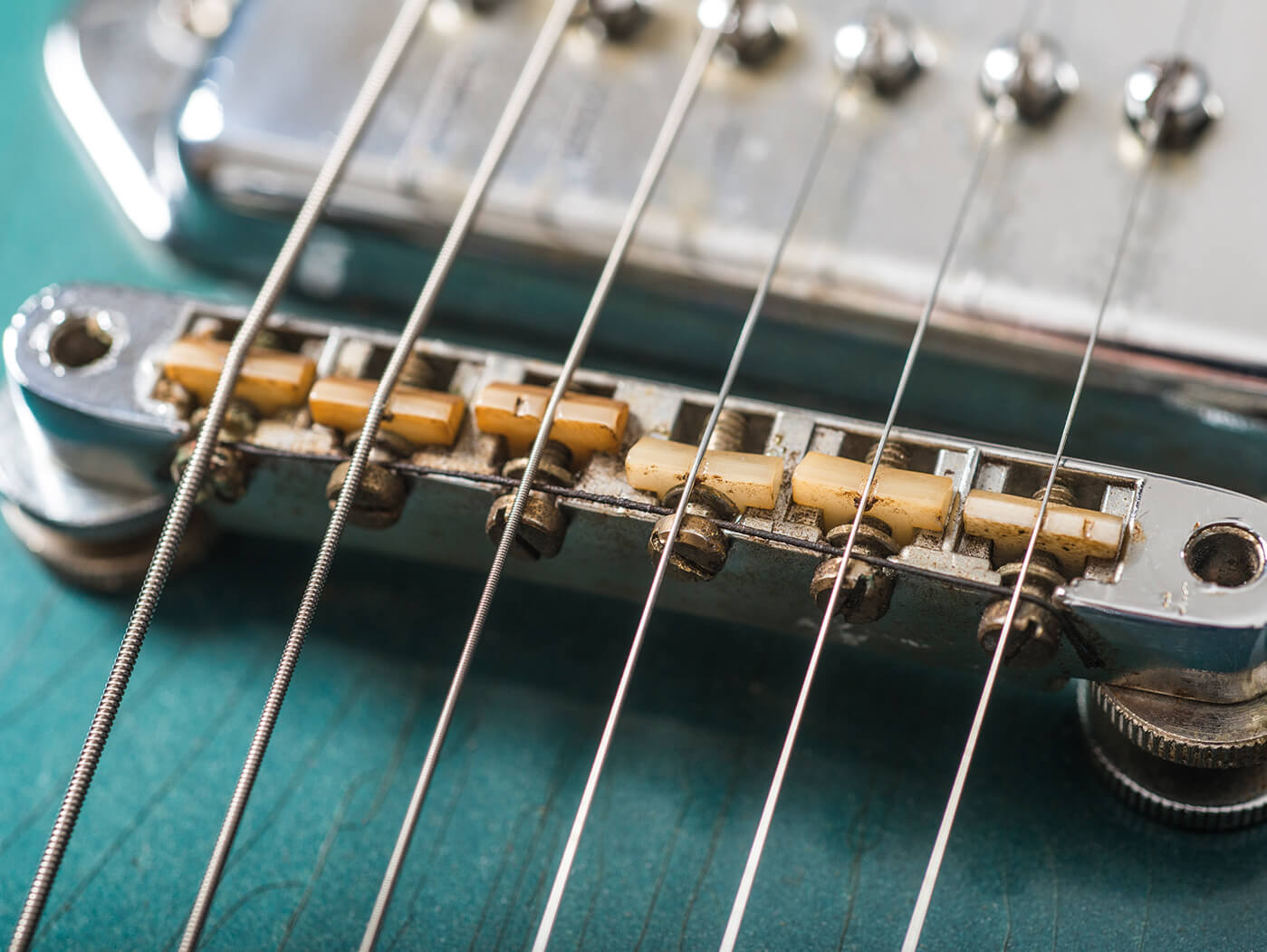 Having carried out several parts-swapping experiments on this type of instrument, we’ve found that nylon saddles play a big role in producing this warm and fat tone. Metal saddles on an ABR-1 generally deliver more treble, less midrange and perhaps not quite as much sustain. Both configurations have their fans and earlier ES-330s and Casinos with metal bridge saddles are highly sought-after for their tonal qualities, too.

By 1967, Gibson and Epiphone necks felt very different to their earlier counterparts. This neck has depth, but it’s also fairly narrow. Compared to our 1962 ES-330, the difference in fretboard width amounts to about 3mm. It may not sound like a lot, but in neck-carve terms, it’s significant. 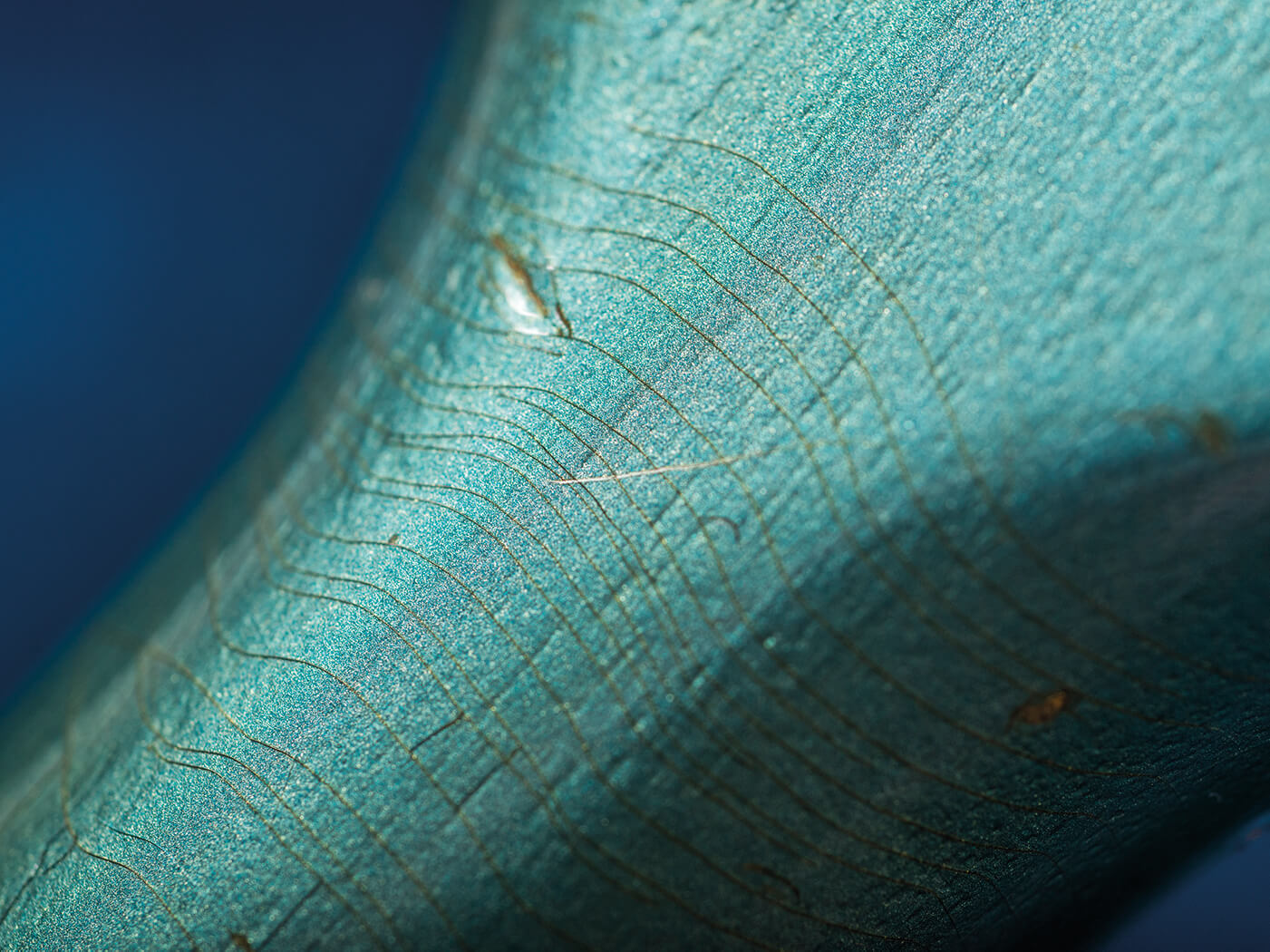 The depth of the neck is considerable as it fattens out towards the body, even approaching 1950s Gibson standards – and even though it’s shallower up at the nut, the narrow nut width makes it feel deeper than it is. Some players may even find the string spacing a little cramped in the lower registers.

Time to plug in, and we quickly discover that the pickups are out of phase. A magnetic compass test shows that both pickups have identical magnetic polarity, which may indicate that the wiring has been modified, but there’s enough anecdotal evidence to suggest quite a few Gibsons left the factory with out-of-phase wiring.

This could have been by special request because someone was looking for those T-Bone Walker tones, or a simple mistake in hooking up the coils that reversed the wiring of one pickup. Either way, it’s a feature that many will appreciate and it can be reversed by rotating the magnets in one of the pickups. 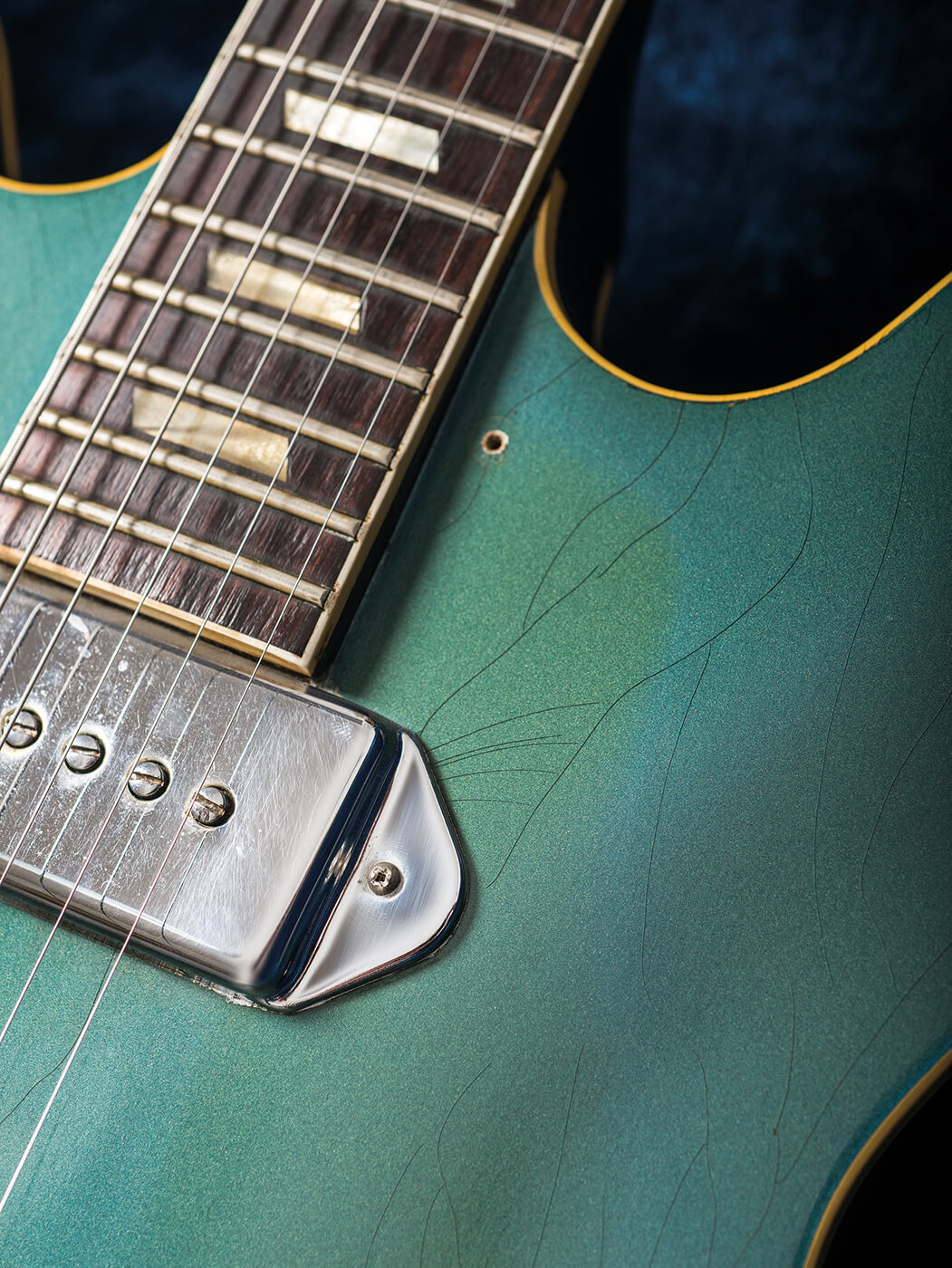 The bridge and neck pickups on most vintage ES-330s and Casinos are rather imbalanced in terms of output and this example is no exception. That said, some are more closely matched than others and this is better than most.

We hear two very distinct tones from these chrome-covered P-90s. The neck sounds more reminiscent of the unplugged tone and it’s smooth, fat and very woody. There’s tremendous clarity without excessive treble and with an overdriven amp, single notes have a distinctly fluty quality in higher registers.

The bridge has that clangier and more percussive edge that makes Casinos such superb rhythm guitars. Whether you’re jangling away in clean mode, or thrashing it out with overdrive, the Casino remains punchy and clear. There’s also an upper-midrange resonance that lends the bridge pickup a slightly wiry quack that we particularly like.

Because our ES-330’s pickup covers are plastic and the Casino’s are metal, we are presented with an opportunity to evaluate how P-90s from a similar era compare. There’s not a world of difference and it’s most apparent on the neck pickups, but the plastic-covered pickups have a more open and airy treble response. 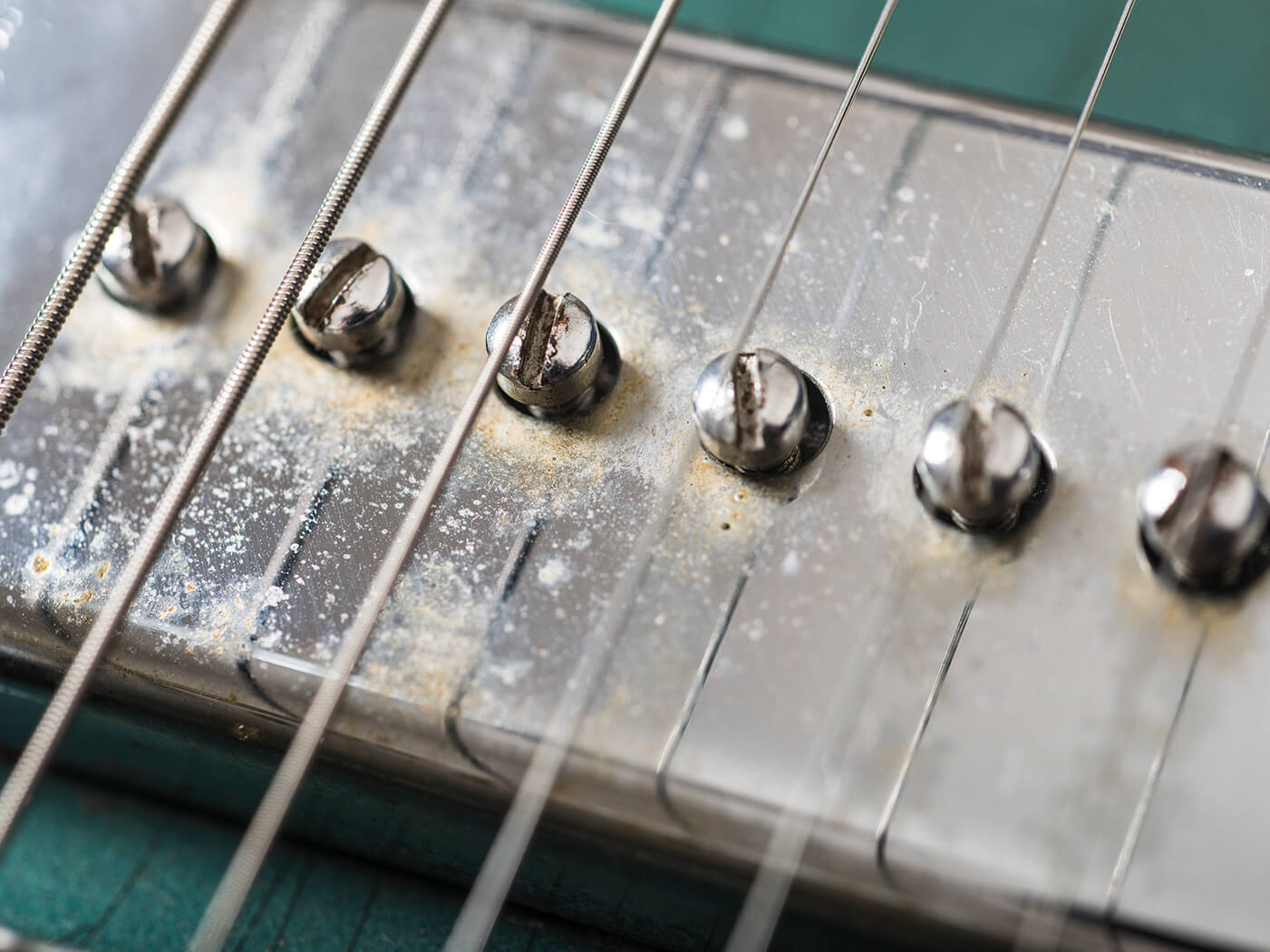 In contrast, the metal covered pickups are smoother, warmer and mellower. The ES-330 has more wiriness and bite, and when soloing, the underlying tone is more ‘eee’ than ‘ooo’. Both guitars can be hard work if you’re trying to coax smooth and sustaining high-gain lead tones out of vintage-style valve amps, but jump on any decent overdrive or fuzz pedal and it becomes a non-issue – just ask Gary Clark Jr…