Gibson’s ES-295 kickstarted rock ’n’ roll, and this 1953 specimen is a heartbreaker

The ES-295 is one of the most iconic Gibson models of the 1950s. It probably would have earned that accolade on looks alone, but when a Tennessee picker used one to lay down some tracks with a Tupelo truck driver, the result was rock ’n’ roll history. Check out this stellar example from way back in ’53…

Scotty Moore didn’t keep his ES-295 for very long and didn’t play it on many Elvis tracks. Even so, it was enough for Brian Setzer to dub the ES-295 the “ultimate rockabilly guitar”.

Most agree it only featured on the first four Elvis singles. Having traded a ’52 Telecaster for his ES-295 and having subsequently fitted a trapeze tailpiece and a Melita Synchro-Sonic bridge with individually intonatable saddles, Scotty chopped in the ES-295 for a ’54 Gibson L-5 in the summer of 1955. 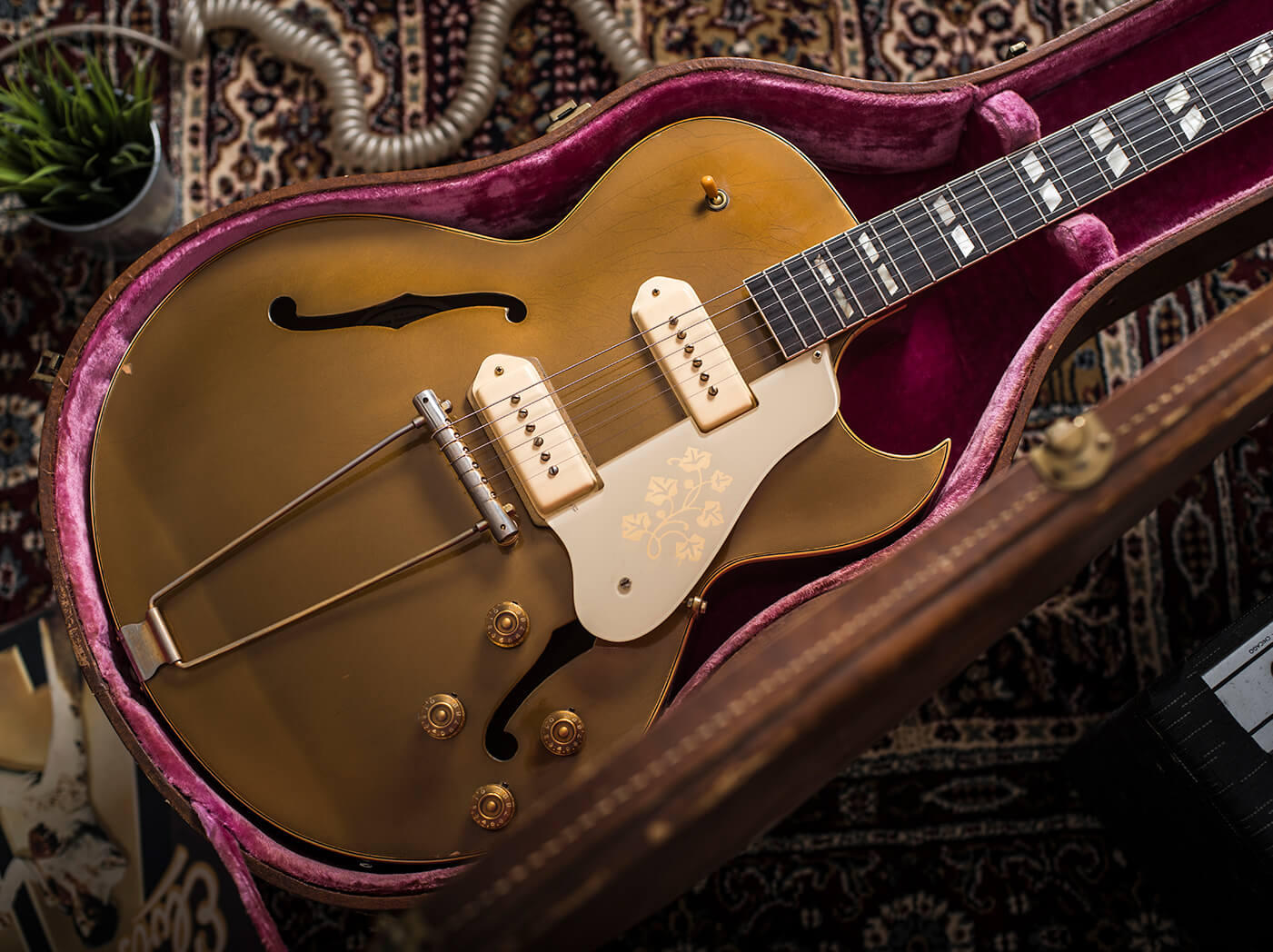 Later on, Danny Gatton was certainly partial to his ES-295, and he turned a young Joe Bonamassa onto them, too. Other notable users include Geordie Walker of Killing Joke, Johnny A and one of this writer’s favourites, Diego Garcia – aka El Twanguero.
Les Paul claimed responsibility for dreaming up the ES-295 concept in the first place. He and Mary Ford were playing a gig for war veterans in Wood Hospital, Milwaukee and met a guitar-playing patient called Dean Davis. Les promised he could have any guitar made for him and Davis requested a “golden archtop”. 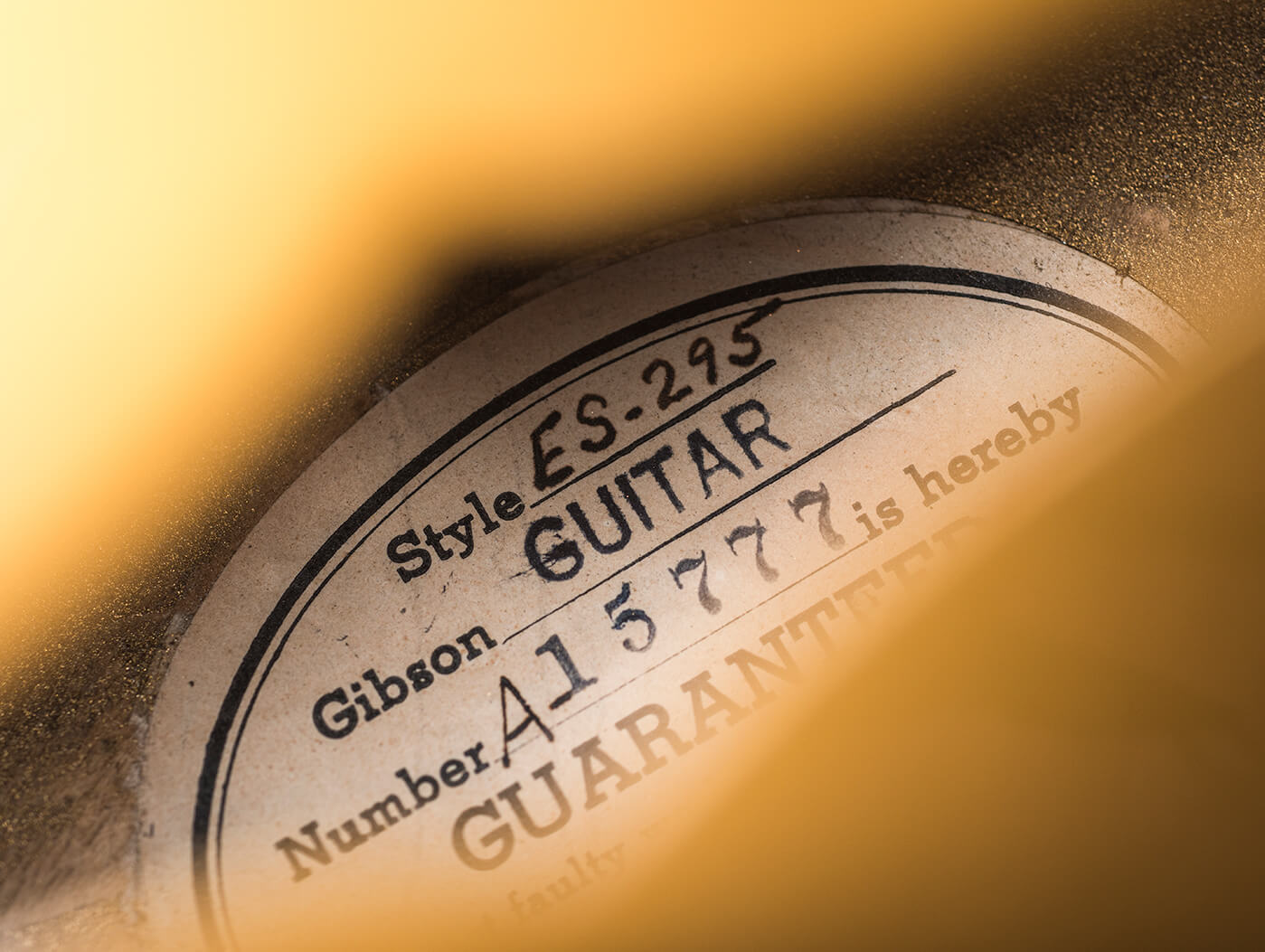 Outside, a doctor told Les that Davis’ case was terminal, so he called Ted McCarty and said he needed “a guitar right now – take an ES-175 and paint it gold”. The guitar, with the serial number A-9196, appeared in Gibson’s logs on 4 December 1951 and was sent to the hospital, but sadly, Davis had passed away before it arrived. His wife sent the guitar back to Les, and Mary Ford was later seen playing one.

Although the ES-295 is widely regarded as simply a gold-finished ES-175 with cream pickup covers and a cloverleaf pickguard, there’s a little more to it than that. The first ES-295s appeared in 1952, but the ES-175 didn’t get a second pickup until 1953.

Then there’s the rather obvious difference in bridge and tailpiece design. ES-175s were more traditional, with a carved-rosewood floating bridge and separate tailpiece. The ES-295 was outfitted with Les Paul’s preferred trapeze tailpiece, featuring an integrated wrapover bridge – gold plated here, of course. This had significant tonal implications, which we’ll address in due course.

The ES-295 wasn’t the biggest seller and after switching to PAF humbuckers in late 1957, the model limped on in the catalogue until the summer of 1958. A few more were made in 1959, but in total, only 49 PAF-loaded ES-295s left the factory. Many blamed the gold lacquer for its unpopularity, so Gibson also sprayed ES-295s in sunburst, cherry and Argentine Grey. Find one of those if you can!

Over the years, it became apparent that Gibson’s gold lacquer was never the most robust of finishes. It’s common to see vintage ES-295s with lacquer flaking off the neck and body, and playing one can be a rough ride. However, we’re pleased to report that this particular ES-295 has survived in remarkable condition.

A 1953 example that comes in its original Lifton ‘Cali Girl’ case, there are no issues with the finish. There is, however, a diagonal crack running along the bass side of the body that extends from the centre of the lower bout to beyond the middle of the upper bout. An excellent repair has been carried out that has stabilised the crack without attempting to disguise anything – we’d regard it as a battle scar more than a blemish, and it certainly makes the asking price more accessible. 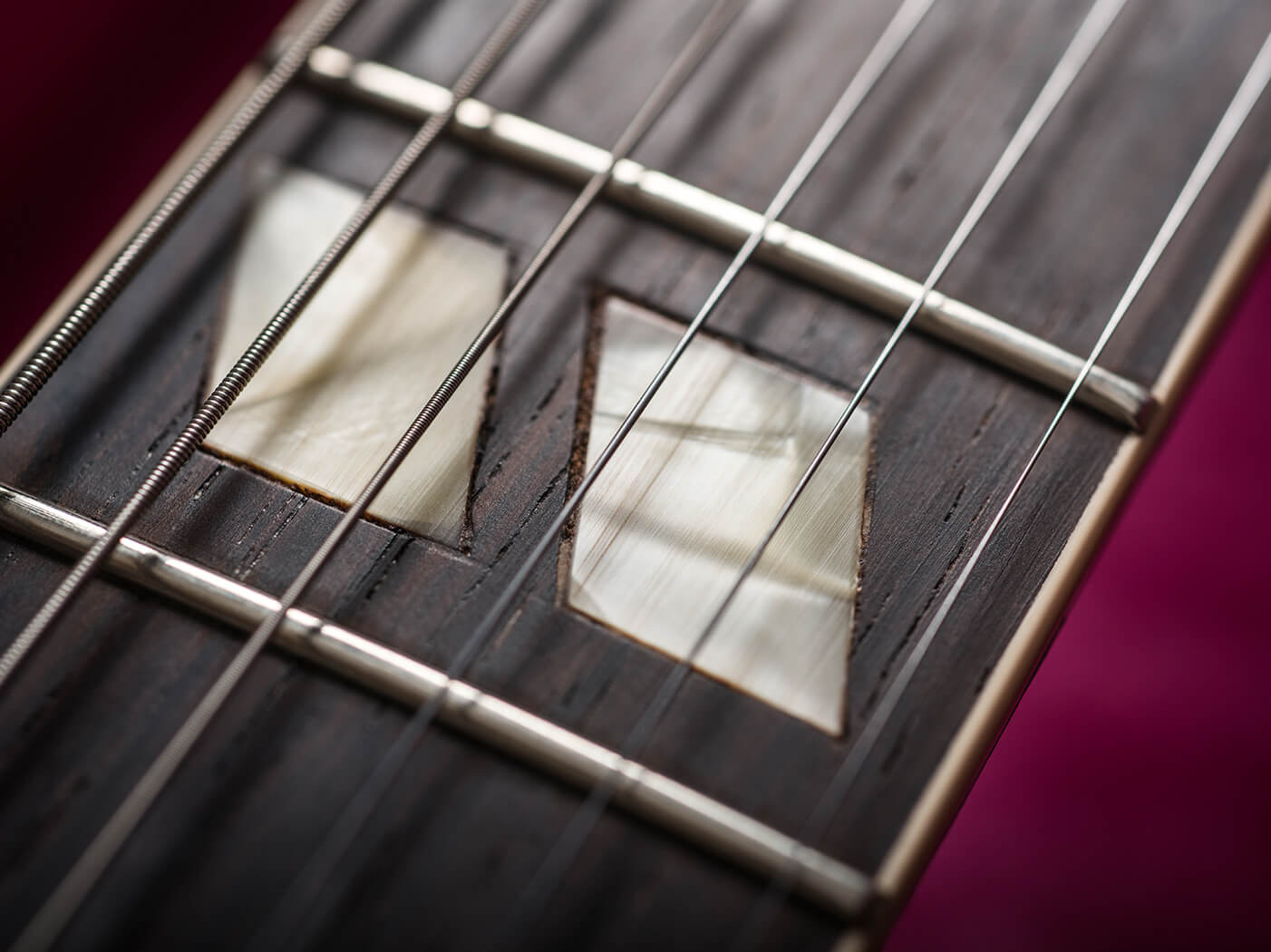 The same US repair shop also performed a very good refret. The wire is period-correct in width, but provides a little more height and the original nut has been swapped for a very well made bone replacement. Fortunately, the electronics have never been touched and our inspection mirror reveals factory pots with a pair of ‘Grey Tiger’ tone capacitors.

The Kluson tuners are in fine shape and retain their gold lustre, while much of the tailpiece plating has rubbed away to reveal the nickel beneath. The speed knobs and switch tip are all original and despite a slight dip in the top, the guitar feels structurally solid. With its straight neck, classic full early 50s profile and low action, the playability cannot be faulted.

Since this ES-295 arrived with us at the same time as a 1956 ES-175, it’s an opportunity to compare like with like. Perhaps surprisingly, we discover that the two Gibsons sound very different.

The ES-175 has much more of an ‘acoustic archtop’ tone, with a percussive brightness, dry bass and not much sustain. In contrast the ES-295 is louder, thicker, a little darker and sustains superbly. Since we don’t subscribe to the gold-lacquer ‘resonance dampening’ hypothesis, the explanation appears to be very simple: it’s all about the tailpiece.

We can also point to the example of our recently acquired 1956 ES-225. That came with a Tune-o-matic bridge installed and the broken original tailpiece tucked inside the case. Repairing and reinstating the trapeze dramatically improved the guitar and although it’s not bolted into the body, we find Les Paul’s trapeze design sounds a lot like a Gibson wrapover.

Back to the ES-295 and although it’s far from pristine, we don’t think this guitar has been played that much. Two clues are the fact that a second strap button has never been fitted, and the pickup pole screws retain most of their gold plating. The latter may be also attributable to the way they have been screwed so far down, as when the guitar arrives, they’re actually below the pickup covers.

Consequently, the guitar sounds a little lacklustre when plugged in until we unscrew the poles to bring them closer to the strings. It’s a case of rise and shine, as the ES-295’s true voice emerges. It’s a huge tone that glides effortlessly from mellow jazz to rockabilly, blues and rock. 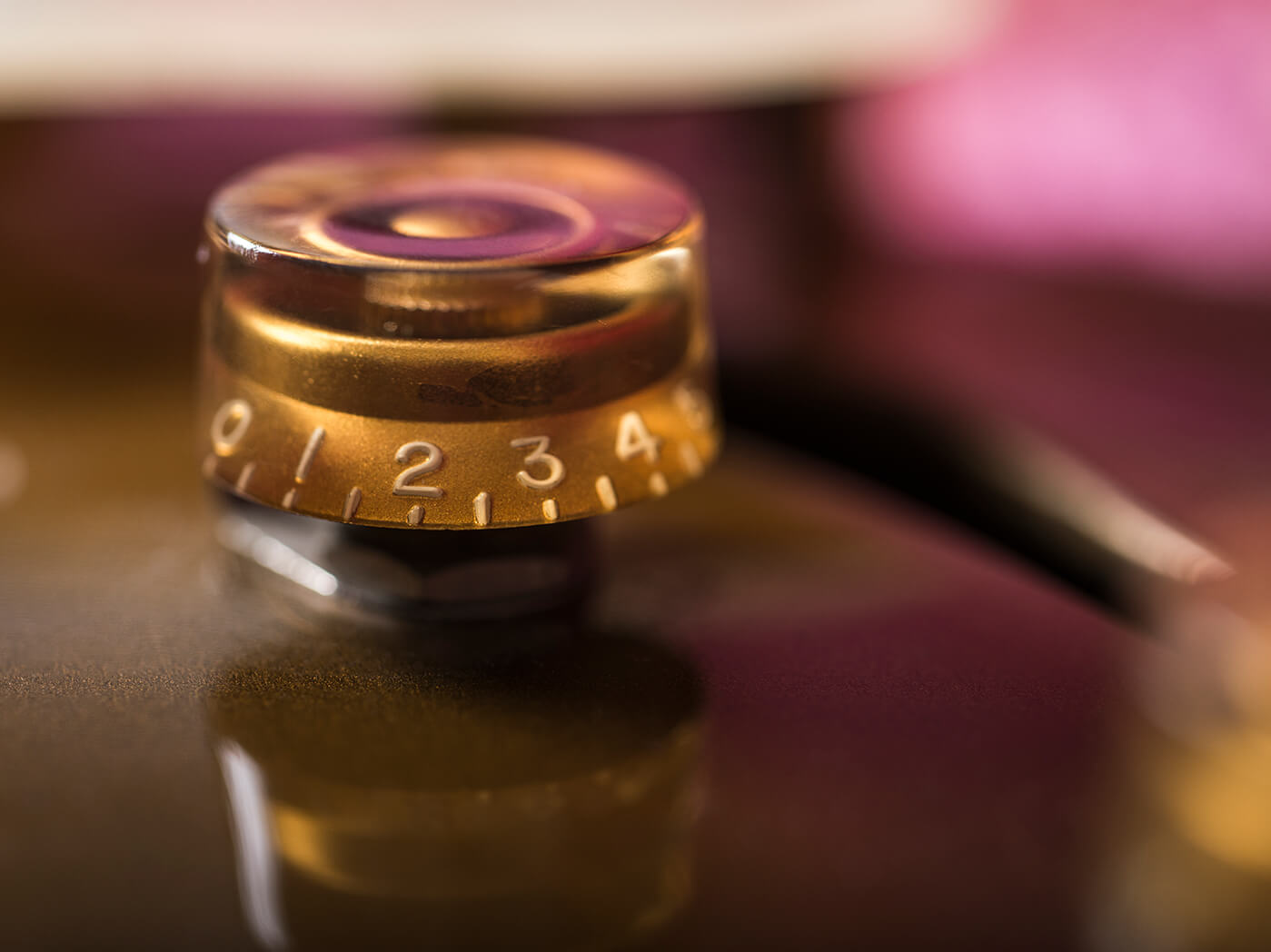 Although quite similar to our ES-225, the ES-295 sounds richer, darker and more muscular. It’s almost as if there’s an inbuilt compressor holding everything together and adding sustain – but without subduing the dynamics.

The big revelation comes when we crank our Rift PR18 up to 10 and there are no feedback issues – even with the guitar about a metre away from the speaker. Instead, we get huge powerchords and the ability to chime through the overdrive. When we switch to soloing, the ES-295 responds more like a hollow Les Paul Goldtop.

Although there’s much to like about an ES-175, this ES-295 is even better because it does so much more and looks amazing into the bargain. This is definitely one of those dangerously good, ‘sell everything to buy it’ guitars that we encounter from time to time. In fact, it should probably come with a health warning…