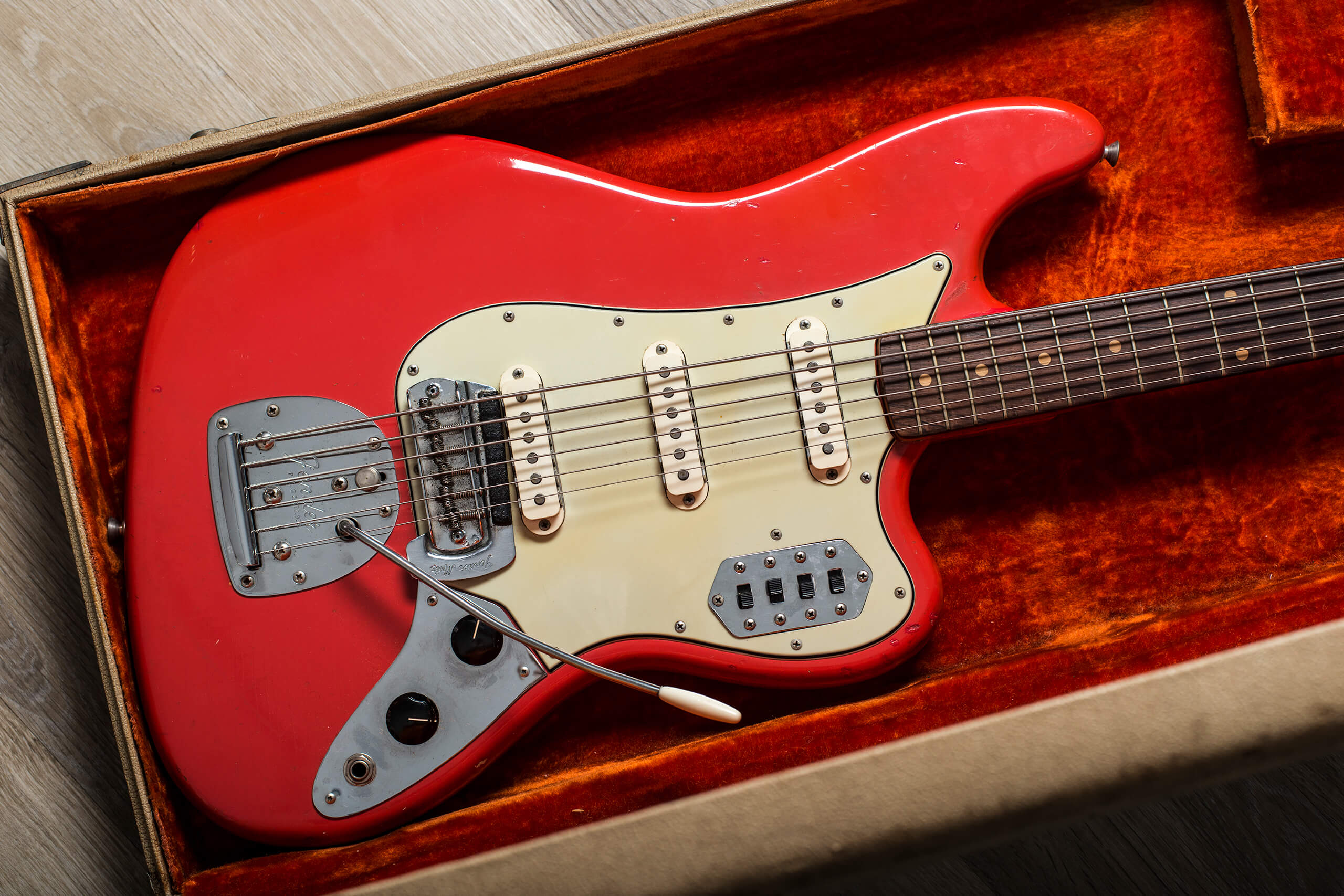 The ultimate secret weapon in the recording studio?

Is it a guitar, is it a baritone, or is it a bass? The correct answer is yes, because the Bass VI is all of the above and more. This unquantifiable quality may partly explain why it wasn’t a major success for Fender, but ‘success’ in musical instrument design shouldn’t always be measured by sales alone.

Whether you know it or not, the Bass VI has added its subtle magic to countless classic and contemporary recordings. From subtle layering in Nashville productions to Cream’s psychedelic extemporisations, The Beatles’ White Album, the gothic atmospherics of Robert Smith and Robin Guthrie, and Placebo’s 1990s indie-rock, the Bass VI has played its part. Sure, it never threatened the Telecaster or Strat for sales figures, but the Fender VI, as it was originally known, is still a significant instrument. 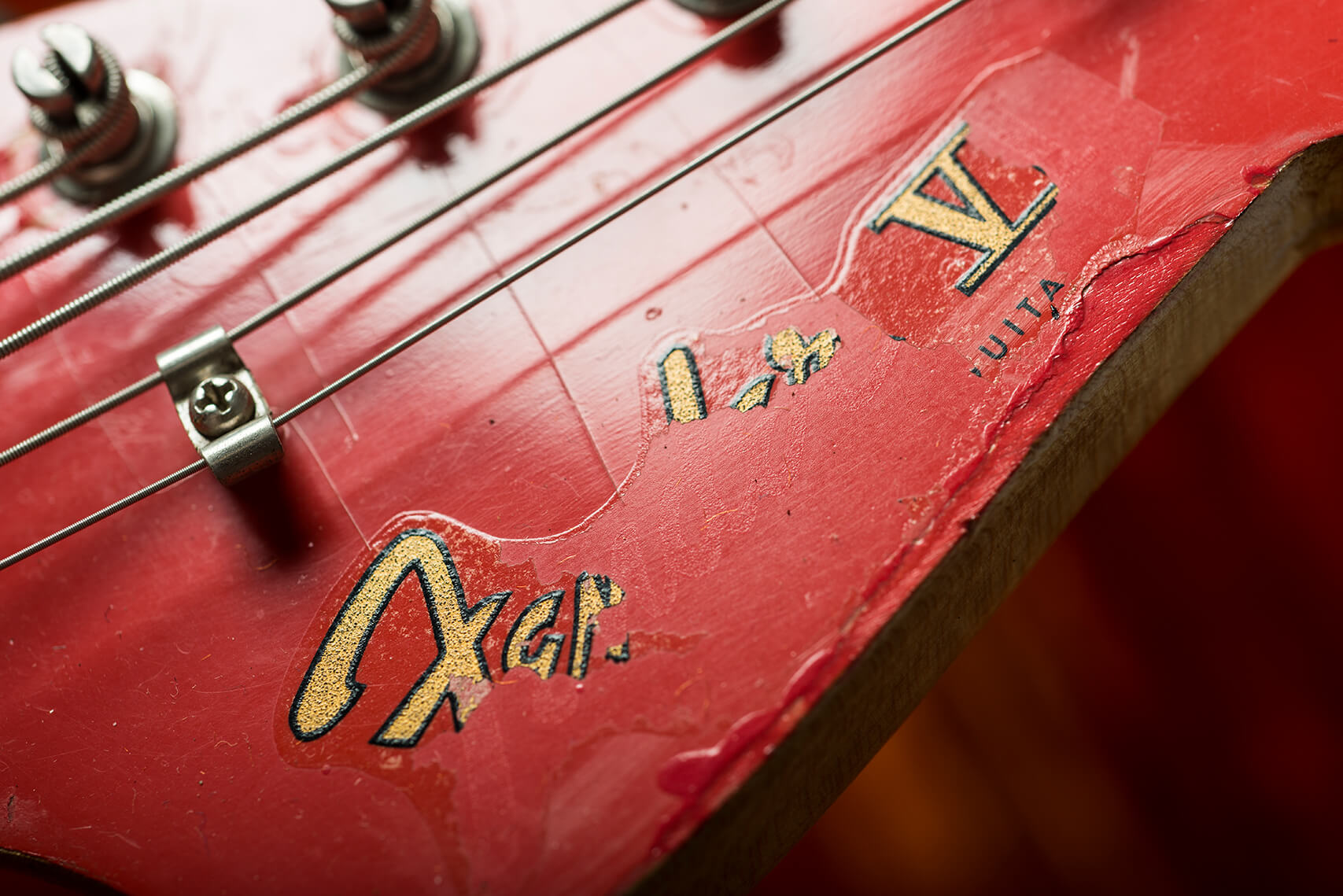 Fender wasn’t the first company to manufacture a six-string electric bass. Danelectro is usually given that accolade, having introduced a six-string bass/baritone with a 30-inch scale length in 1956. Whether you call one of these instruments a bass or a baritone is largely a matter of how you tune it.

Duane Eddy played his Danelectro tuned an octave below a regular guitar, but in the 1950s and 60s there was an issue that may have prevented the six-string bass from becoming more widely accepted – according to Fender’s Freddy Tavares, the string industry at that time wasn’t able to produce strings for 30-inch scale instruments that sounded as good as those they made for the standard 34-inch bass scale length. 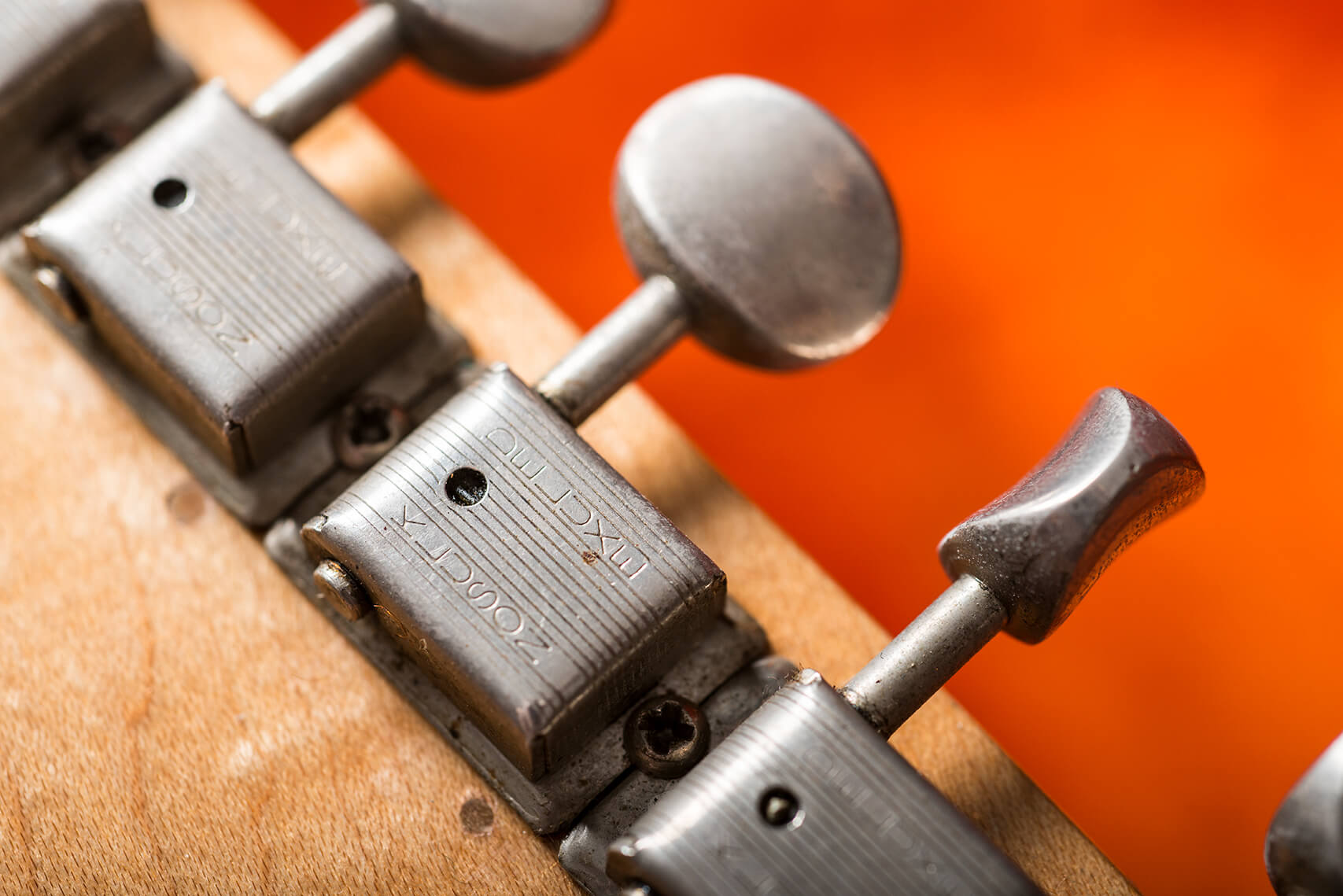 Players struggled with floppy low E strings, and the solution was to tune up a few steps to increase string tension. When a six-string bass is tuned C-C or B-B, it effectively becomes a baritone guitar. Fortunately, the choice of strings available these days means that instruments such as the Fender Bass VI can be both bass and baritone.

The Bass VI was first introduced in 1962, and it bears a strong family resemblance to the Fender Jaguar that was introduced the same year. It has been described as a cross between a Jaguar and a Jazz Bass and it’s easy to see why. 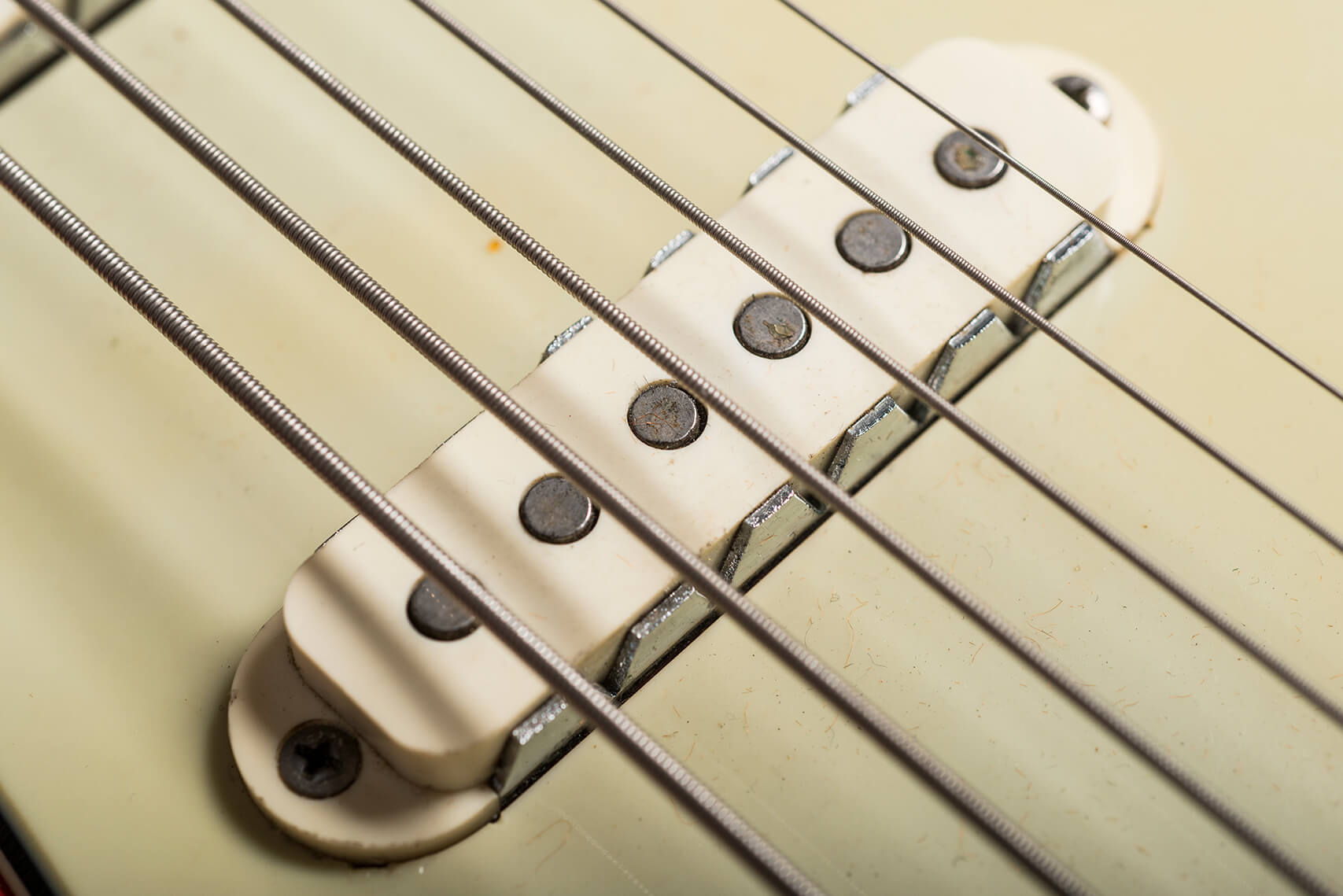 You could reasonably conclude that Fender sawed Jazz Bass and Jaguar bodies down the centre line then joined them – with the Jazz half on the bass side and the Jaguar half on the treble. Considering what this instrument is designed for, it seems Fender may have been reinforcing the point.

The neck has Fender’s usual vintage complement of 21 frets, with a 30-inch scale and regular-sized Kluson tuners. The frets are the originals on this example and the fretboard is so pristine, the factory sanding marks can still be seen on the clay dots. 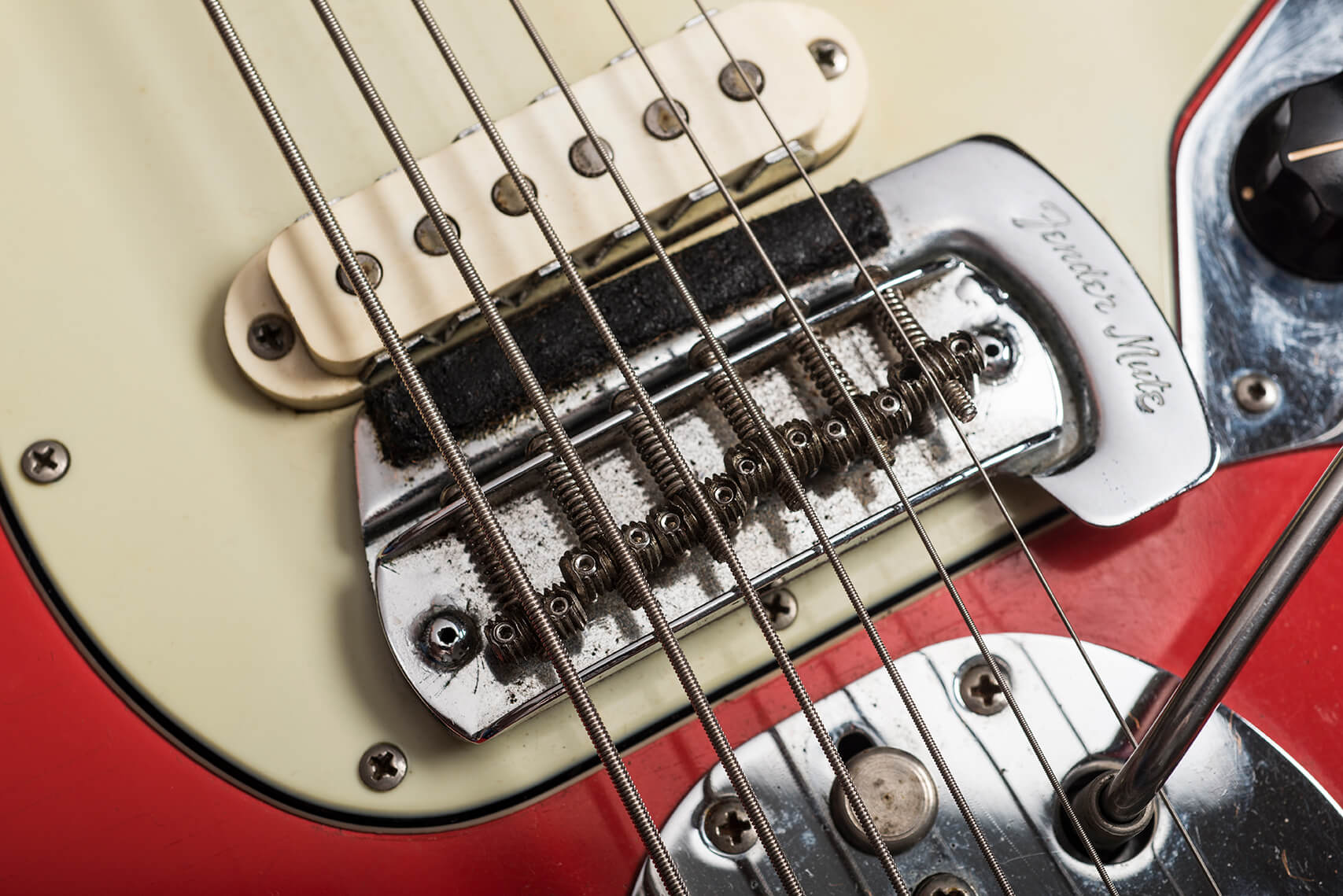 At some point our Bass VI was fitted with non-standard tuners, and now has a set of later double-line Klusons. Filled screw holes are just visible, along with some damage to the face of the Fiesta Red headstock from when the bushings were removed.

The first-year Bass VIs had Strat-style pickups set in metal surrounds and a Jaguar style three-switch plate – on/off for each pickup. By the time this one was made in early 1963, the Bass VI was being fitted with a trio of Jaguar pickups, complete with Magnetic Field Accumulator claws, plus a four-switch plate with a Jaguar-style low-cut ‘strangle’ switch, and pop-up string mute. The neck pickup on this instrument has also been rewound. 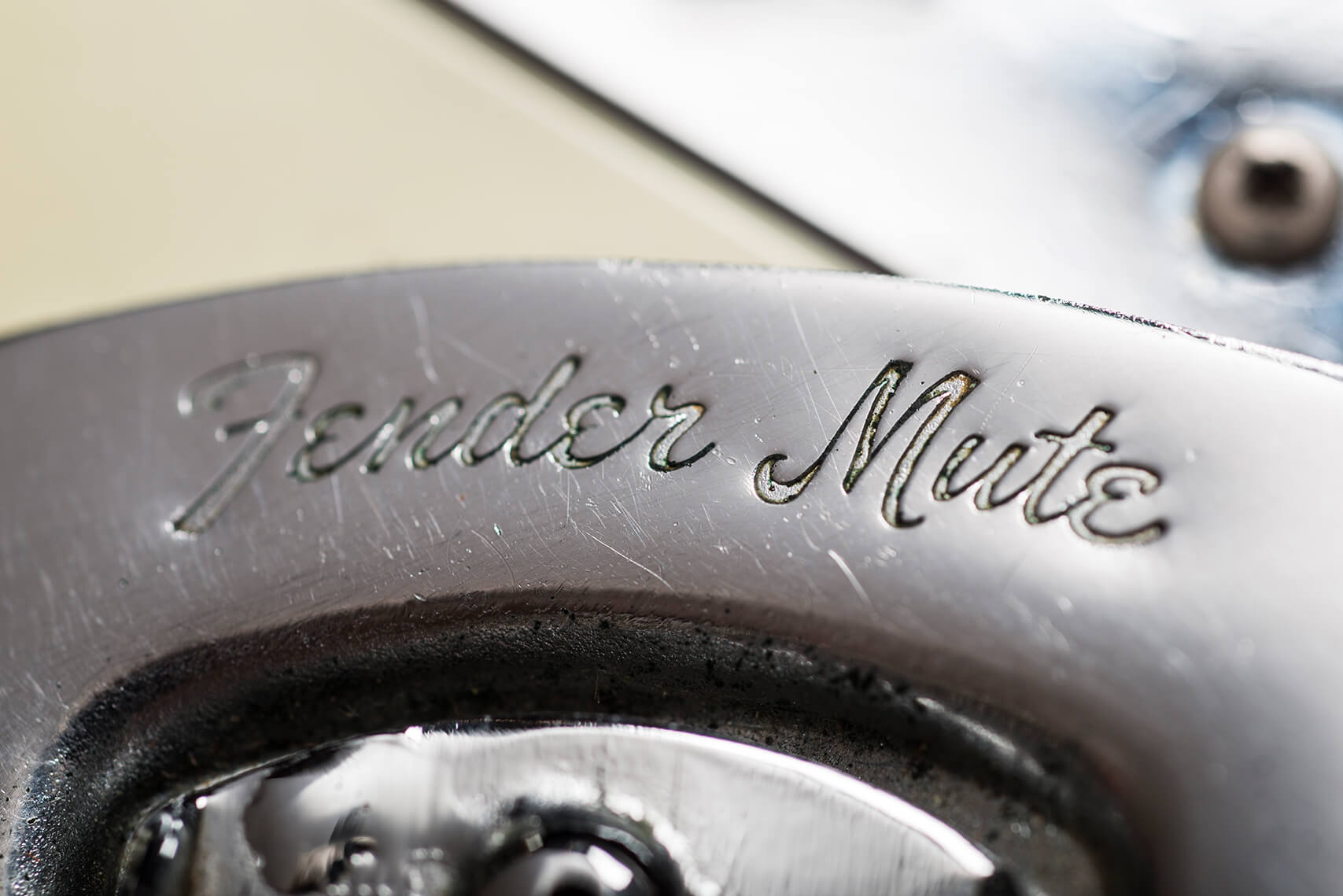 The mute and strangle switch may seem unusual these days, but they made sense at the time. Six-string Danelectros were often used by Nashville and LA producers to add punch and clarity to both electric and acoustic basslines. Played palm-muted with a trebly sound, it was referred to as ‘tic-tac’ bass, and Fender’s new-for-’63 features put that Nashville sound at players’ fingertips.

The vibrato systems are also the same, but if you look closely at the Bass VI’s bridge, you’ll see that it’s a touch wider to provide a bit more room for adjusting intonation – which is pretty smart considering the varying string gauges that can be used on this instrument. 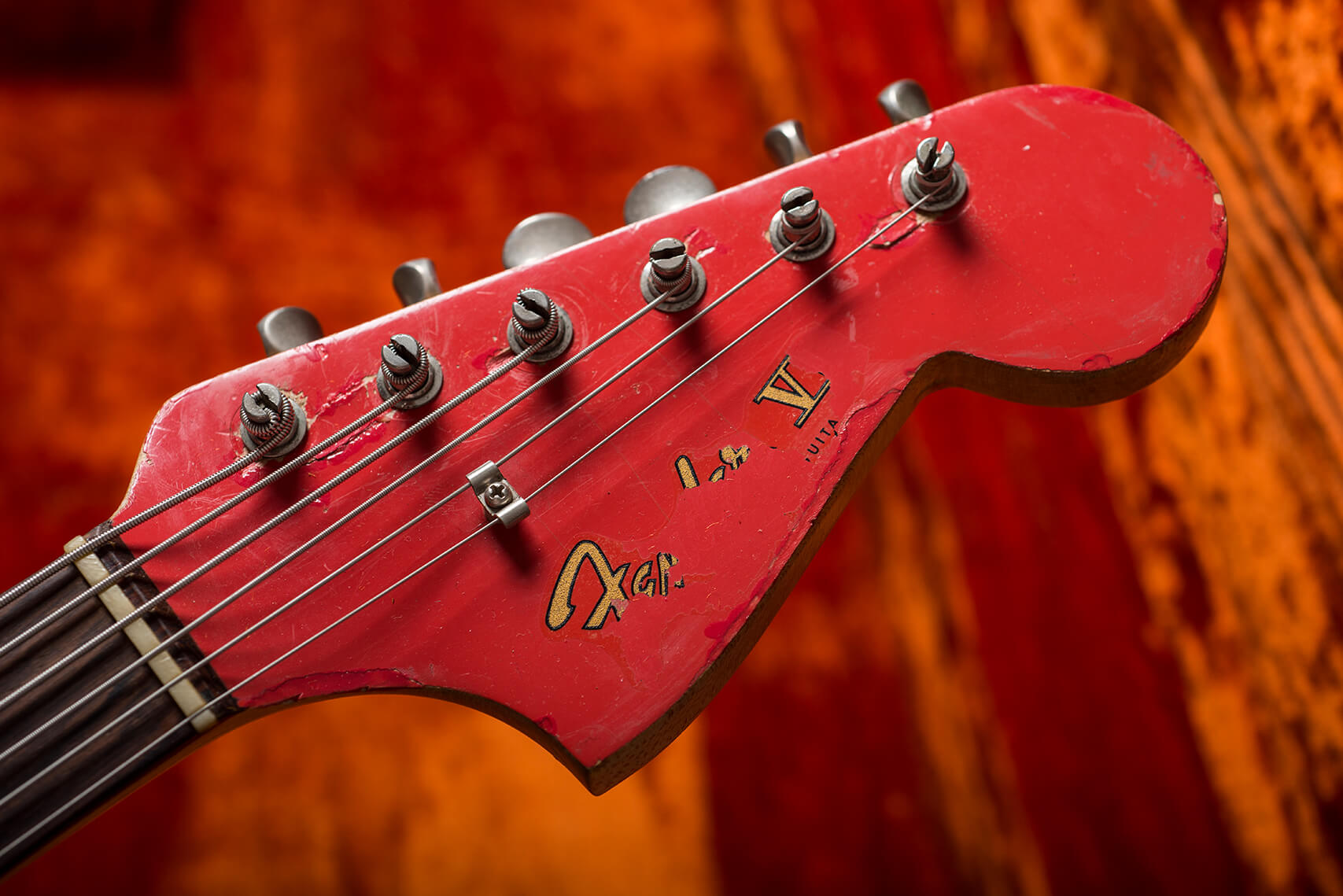 Our Fiesta Red example’s neck has virtually no playwear and the fretboard looks almost factory fresh. The green nitrate ’guard has shrunk slightly, but it’s in otherwise perfect condition and all the hardware is very well preserved. The guitar even comes with its original whammy bar and rare blonde Fender case.

The Fiesta Red paintwork is in pretty fine shape, but has suffered a few bumps and bruises over the years. Any damage is mostly confined to the edges and the back, and although a previous owner has carefully touched up the worst bits – probably with nail varnish – the colour match isn’t too bad. 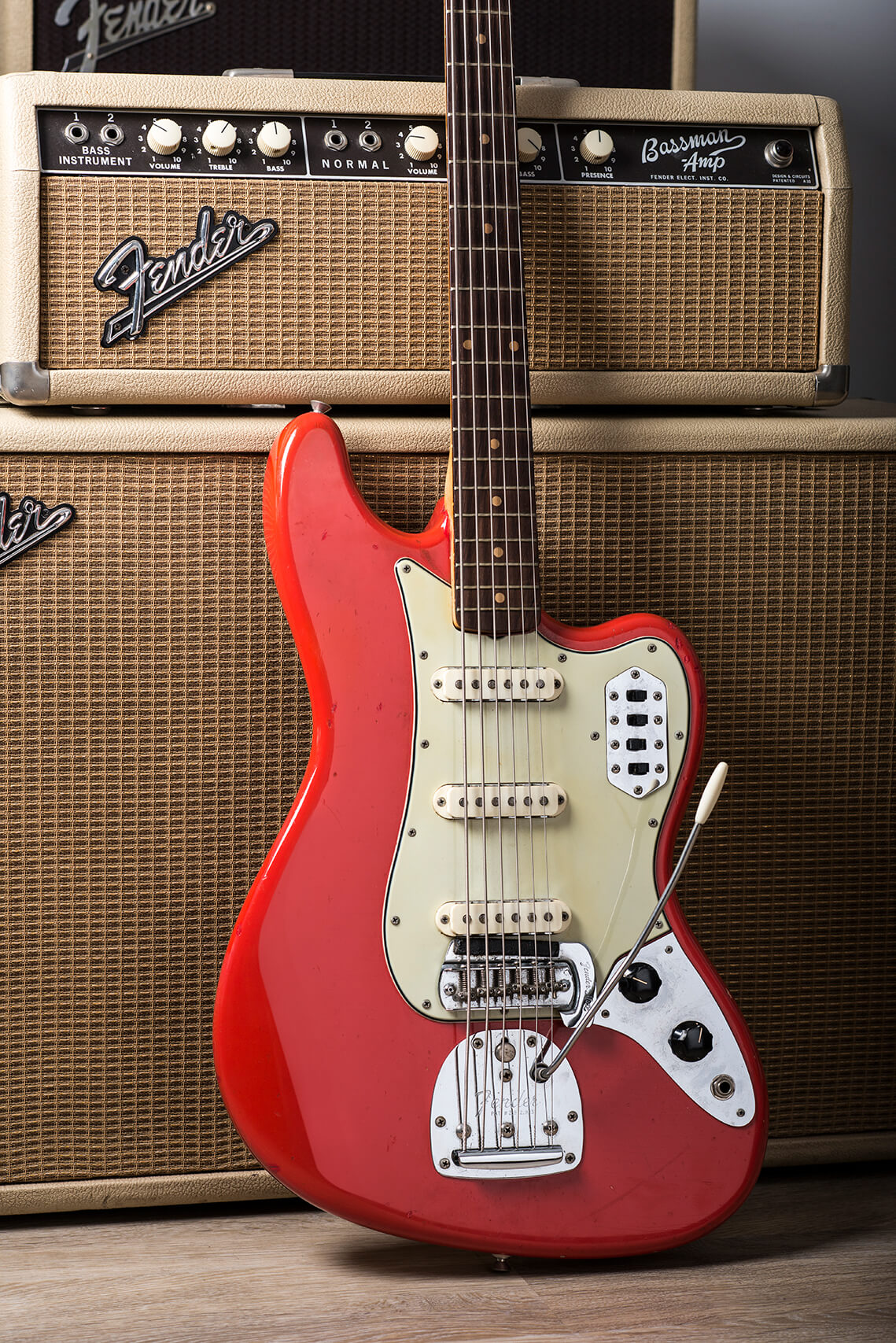 The neck profile and narrow nut most closely resemble a Jazz Bass and it makes the transition from guitar to bass utterly seamless. Although the strings are fatter, the spacing is far from cramped and it’s extremely easy and comfortable to play.

If it was Fender’s intention to create an instrument that could blur the boundaries between a bass, baritone and six-string guitar, then the Bass VI is a stunning success. You can capo it and play rhythm, and it’s so easy to pick out chords all over the neck, it almost comes as a shock when you revert to the low strings and remember you’re actually playing a bass.

The bass tones are very much in the Fender tradition and the middle pickup is the go-to selection. But of course, all the combinations work well and the tonal range is so wide, it makes honing a sound to sit in a track far easier than usual.

Where the mechanical mute is often overlooked on a Jaguar, we would probably replace the degraded foam on this Bass VI to make use of it. Using the Bass VI while recording, we achieve a classic woody and growly thud by stuffing some foam under the strings. Even with that in place, the Bass VI’s extraordinary sustain is hard to suppress.

This instrument is a revelation, and if we owned a Bass VI we suspect it would be used regularly. It’s versatile, easy to play and very inspiring. Unfortunately, our funds won’t quite stretch to this custom-colour example, but with everything from Custom Shop to Squier reissues out there, a Bass VI will now be added to our Reverb search list!