Despite its name, many guitarists regard the 100-watt Marshall Super Bass as the ultimate in vintage Plexi tone. We check out this very early example and find out why…

The Fender Bassman provided the early inspiration for Marshall amplifier designs but, both sonically and in terms of their circuit architecture, they soon evolved into something entirely their own. Marshall’s bass amps were arguably more popular with A-list bassists than the Fender Bassman ever was – Jack Bruce, Chris Squire and Lemmy were fans – but the Super Bass has always been revered by guitarists too.

This Super Bass – the JMP 1992 Super Bass 100, to use its full model name – is a very early example and comes courtesy of Vintage Tone Factory, a boutique guitar recording studio specialising in remote reamping that can be found via instagram.com/vintagetonefactory. 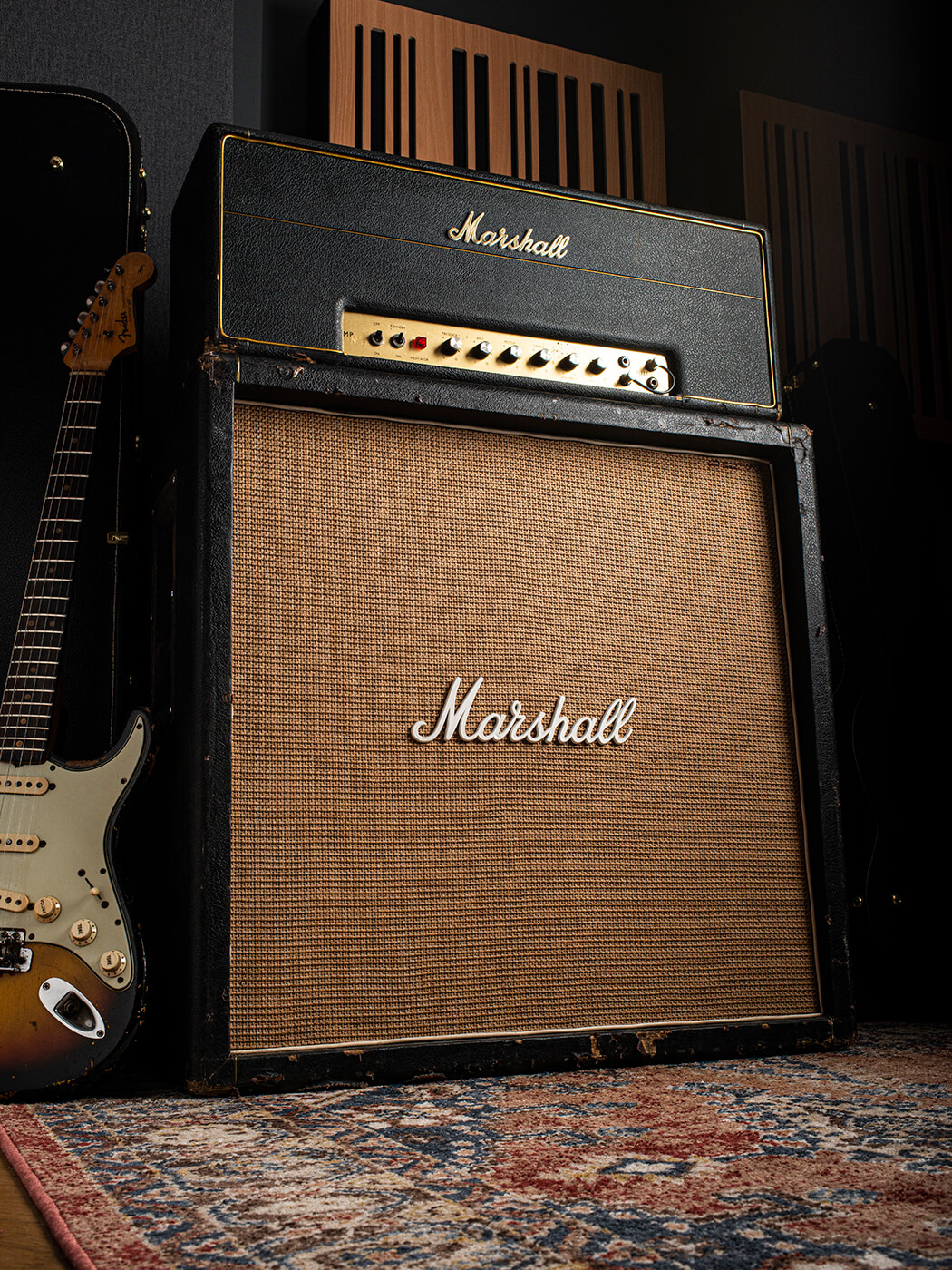 Dating 1960s Marshalls accurately can be problematic because there was no coherent system of serial numbers until July 1969. Instead we have to look at the amp’s features for clues. There’s an ‘SB’ stamp on the rear of the chassis – no prizes for guessing that stands for Super Bass – followed by a number that closely corresponds to other Super Bass examples we found that have been identified as 1967 models.

Marshall’s earliest 100-watt bass head was the JTM 45/100 model with ‘Super 100 Amplifier’ on a white rear panel and the word ‘bass’ adjacent to the speaker impedance selector. By 1967 there was a black flag JTM logo on the front panel with a gold Plexi rear panel adorned with ‘Super Bass 100’. The model designation was soon changed to JMP with black lettering on the front panel, but Super Bass 100 was retained.

Marshall also transitioned from aluminium to a steel chassis in late 1967. This chassis is definitely aluminium. Large rubber cabinet feet replaced smaller grey feet in 1969, and even though the feet on this amp are modern, grey residue from the smaller originals can still be seen when they’re removed.

More clues may be gleaned by looking at the circuit. The earliest JMP Super Bass models inherited the JTM 45 Super 100’s larger power supply board. The JTM rectification diodes were located centrally between eight sideways-mounted 32mF RS filter capacitors. Marshall later shifted the diodes closer to the power transformer, just before changing the model designation to JMP. All the evidence suggests this amp was made in 1967 and is almost certainly one of the very earliest JMP Super Bass 100 amps that Marshall made. 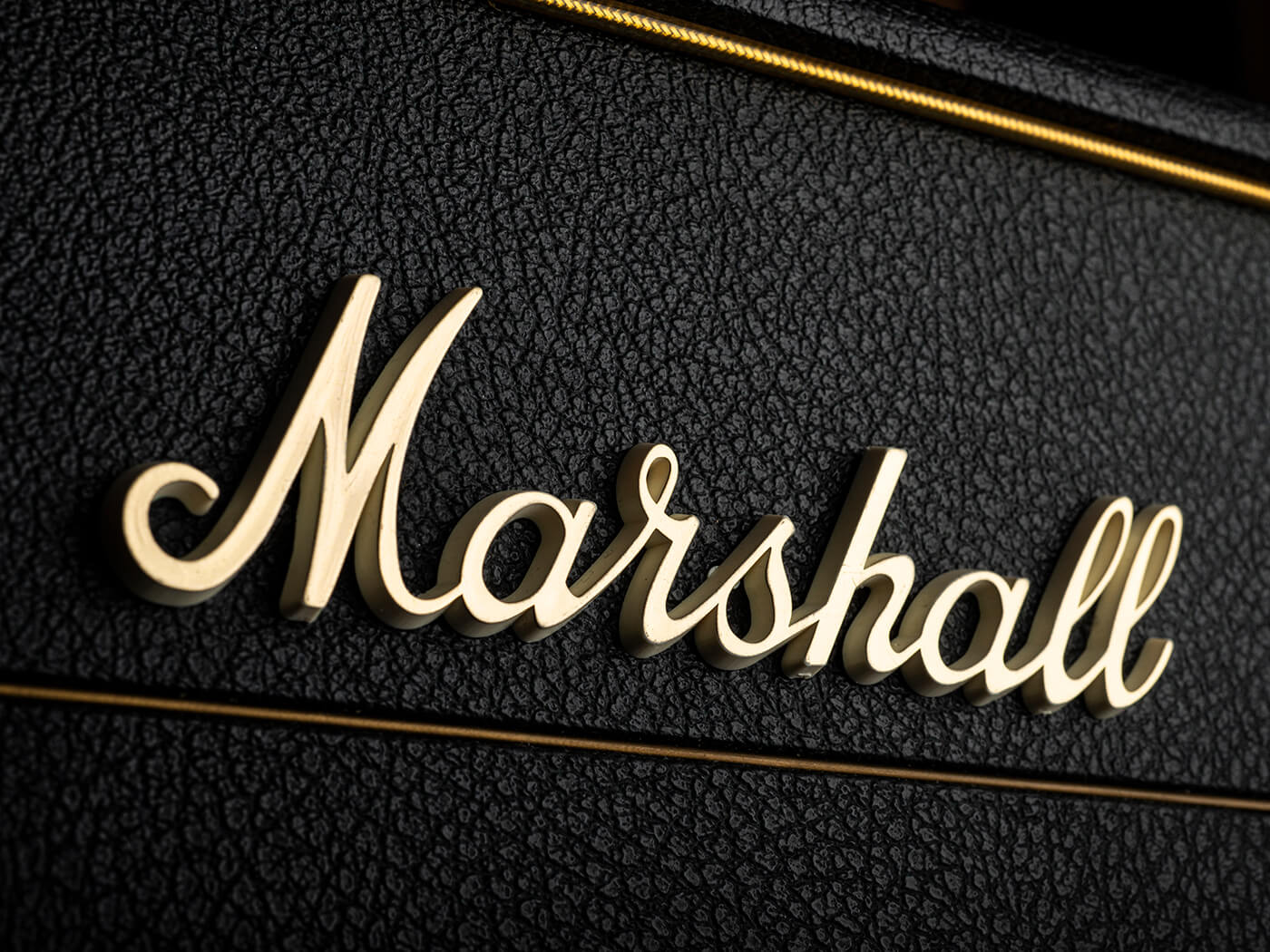 Although the original handle, black Tolex and gold piping remain in decent condition for their age, the back panel is missing. Having one would provide some physical protection for the valves, but these amps run hot, and keeping the back open is probably advantageous in a home or studio environment.

Relatively little work has been done on the circuit board over the years, but it can be tricky to identify the components that have been replaced because Marshall used whatever they could get hold of. Almost all of the carbon film resistors look original and rather than the fabled ‘mustard’ signal capacitors, this amp has grey RS types that appear factory fitted. Two of the filter caps, two signal caps and V1’s cathode bias cap are replacements, and one of the speaker output jacks has been changed, but other than that, the amp is surprisingly original. 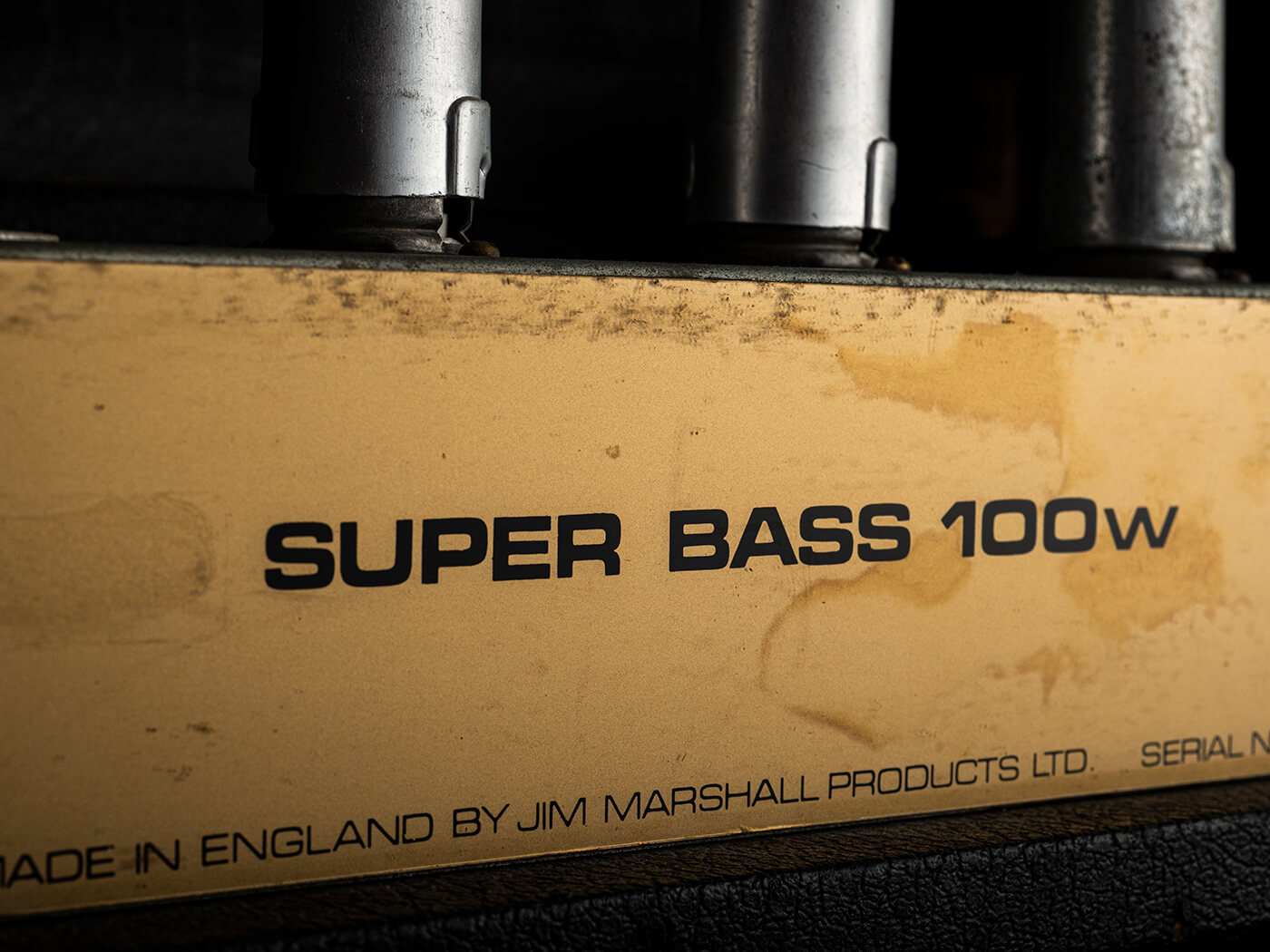 Why did the likes of Paul Kossoff, Eric Johnson, Jimi Hendrix, Jimmy Page and John Frusciante chose to use a Super Bass rather than a Super Lead? Super Bass enthusiasts will no doubt mention less aggression, warmer tones and a more pedal-friendly front end.

Consequently, the Super Bass has developed something of a cult following, but the differences between a Super Lead and a Super Bass amount to little more than a handful of components. Turning a Super Lead into a Super Bass, and vice versa, is relatively simple.

Broadly speaking the differences are as follows: the Super Bass’ first preamp tube’s cathodes share a cathode bias resistor and capacitor but the Super Lead’s V1 cathodes each have their own. Moving through the circuit, the Super Lead’s volume one control has a 500pF bright capacitor wired across it and there are some minor component value differences in the tone stack – notably a 500pF capacitor on the treble control rather than 250pF. Finally, the signal caps coupling the phase inverter plates of the Super Bass to its power valves are 0.1uF rather than 0.022uF, which passes more low frequency content.

These amps were made in an era before volume level restrictions or a widespread understanding of the causes of long-term hearing damage. The Super Bass is a dangerous amp because it sounds so gloriously sweet, you may not notice how loud it really is until your ears begin shutting down. Within a couple of minutes of testing, our ears are already telling us it’s time to connect an attenuator.

Context is everything. When bands were playing stadiums and festivals in the late 1960s, often without sound reinforcement for the guitar amps from the PA system, amplifiers with this sort of power were a necessity rather than a luxury. Happily, players these days have the benefit of innumerable attenuation and speaker simulation solutions that make it possible to tame these beasts, even in a home-recording scenario.

Having so much output power means that there’s a ton of clean headroom, and the Super Bass’s versatile and powerful tone-shaping makes it an outstandingly clear and full pedal platform. Linking the channels with a patch cable between the bottom left and top right inputs adds to the versatility; mixing in some of channel two bolsters the bass and lower mids and is especially useful in combination with single-coil guitars.

The volume increases gradually until there’s a sudden rush and the underlying growl becomes a roar. The overdrive sounds huge, even when attenuated, and with a set of PAF humbuckers, the sustain and harmonic bloom are berserk.

But the characteristic that impresses us most is the dynamic response. The first amp this correspondent owned was a 1972 Super Lead and the transients were so spiky, it was actually painful and intimidating to play. The Super Bass is nothing like that because, despite solid-state rectification, it always has a responsive feel along with a musical natural compression.

If upper-midrange aggression, shrill treble and unforgiving dynamics spoiled the big-box Marshall experience for you, a Super Bass will make you reconsider. Glistening Hendrix-y cleans, 1960s blues-rock crunch, classic hard rock… the Super Bass can do it all.

As long as you are strong enough to lift one, modern technology has made high-power amplifiers a viable option for gigging and recording again. This thrilling amp is the best vintage Marshall we’ve ever played and it makes some of our favourite low-power amps feel like mere toys. Sometimes more really is more.