A closer look at the guitar the Queen guitarist lovingly calls, “the old girl”. 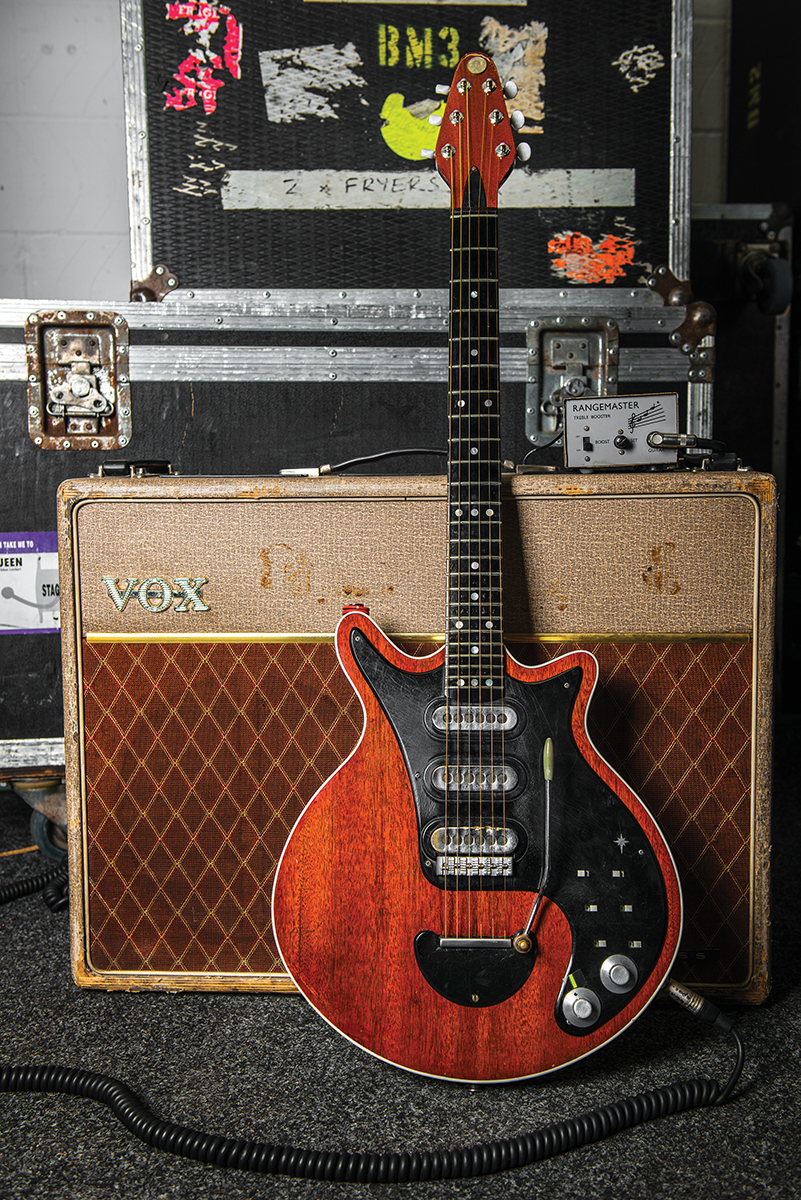 What is it?
You know! This homemade 1963-65 electric has graced Queen’s estimated 200-250 million worldwide album sales. Although almost universally known as The Red Special, Brian calls it “the old girl”.

Anything special?
Of course! After learning to play banjolele, young Brian’s teenage dream was an instrument that could “talk” to him and “feed back in a good way”, as per Jeff Beck. His father Harold, an electrical engineer who worked on Concorde’s landing system, helped Brian make it happen. “It took two years and was all done with hand tools, using any materials we could lay our hands on,” May says.

“The neck was part of an old fireplace. We hand-carved the inlay on the frets out of old mother-of-pearl buttons and the tremolo arm was made from a bicycle saddlebag holder, topped off with the tip of one of my mum’s knitting needles.” May fitted it with Burns Tri-Sonic pickups but re-wound them with reverse-wound/reverse-polarity and potted the coils.

Its scale length is 24 inches – neither Gibson nor Fender length. May worked out the correct fret placements via a 60s mainframe computer “with an overall capacity of about a thousandth of your laptop. The calculations were correct to 24 decimal places. Really! I have the printout somewhere.”

Over the years, authorised replicas have been built by John Birch, Greg Fryer, Andrew Guyton, Burns, Guild and, now, Brian May Guitars. It has its own book, co-written by May and G&B contributor Simon Bradley, its own Wikipedia page and, on tour it has even been under armed guard. Rock memorabilia auctioneers Cooper Owen say that it’s “impossible” to value such a unique guitar.

Uniquely Brian it may be, but Teenage Fanclub’s Raymond McGinley used an authorised Guild RS copy (but with DiMarzio pickups) to record much of 1995’s Grand Prix album. “I couldn’t resist it. I thought, ‘No one else is gonna have the courage to play one of these on stage!’ I had to go for it.”

Signature sounds
With all its switching, it boasts 27 basic tones – think Strat or Les Paul and beyond. Killer Queen, with one of Brian’s favourite solos, sums it up.

Similar retail buy
Brian May Guitars will rock you – the BMG Special is £649, the more authentic BMG Super is £2,950.

Brian says
“Most people’s tone is actually in their fingers. I was quite shocked when I played with Hank Marvin. I always thought his tone was all about his guitar. He picked up my guitar and immediately it sounded like Hank Marvin… it’s what’s in the fingers, the spirit and the mind. I probably sound like me on any rig.”