Rory's nephew, Daniel, tells us the story of how this legendary Strat got its uniquely worn finish.

Rory’s battered and bruised early 60s Stratocaster has become one of the most iconic instruments in rock ’n’ roll history. It would be remiss under those circumstances to not ask Rory’s nephew, Daniel Gallagher, to tell the story of the guitar and how it feels to strap it on…

“It’s almost like a piece of driftwood and Rory was the ocean on it – it’s so worn to him! Obviously, there’s the paint going and the divots where his pick and hands were wearing into it, but for me, it’s the back… it’s just the smoothest bit of wood, really beautiful to touch, and that’s just from rubbing against him.

“The blue from his jeans is actually dyed into the wood! And the neck… it’s just the sweetest thing – it’s so perfectly worn, your hand just slides up it – it’s quite light, and it’s so playable! When you pick up another Strat it’s like, ‘Oh okay, this is nice and everything…’, but this just fits into you. I’m maybe a touch taller and bigger than he is, but for someone of his size and height, you can see how it would just fit absolutely perfectly. And he never took it off after he got it in 1963.”

Rumour has it that Rory’s Strat was the first ordered in to Ireland, but the story of how he came across it is typically unique… 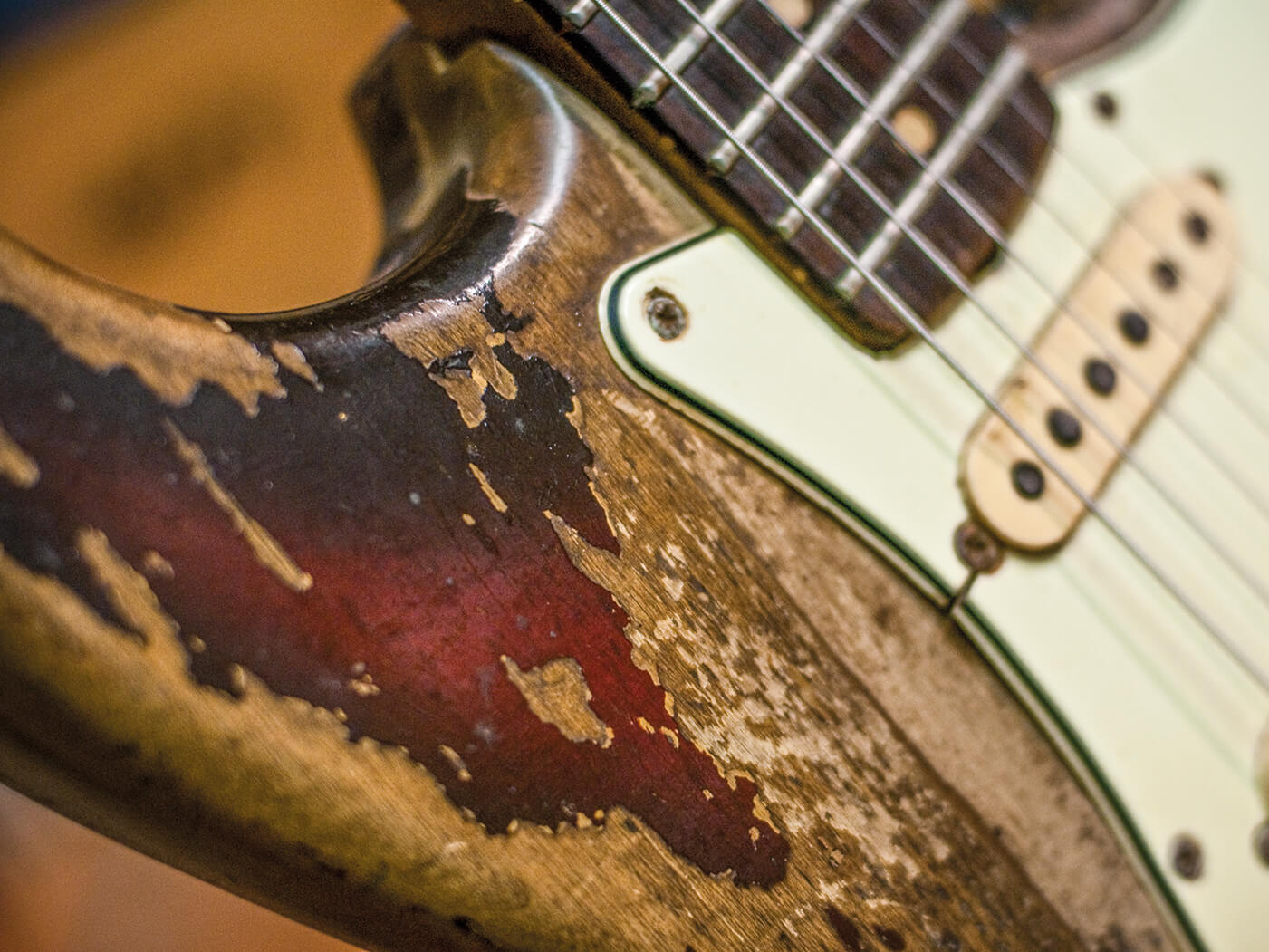 “The leader of another showband ordered it in, but he wanted it in Fiesta Red,” Daniel explains. “So here it is, the first Strat in Ireland… but when it turned up it was Sunburst! He did a tour with it – there’s actually some cool footage of the guy playing it, and someone sent me a photo the other day of the guy playing it in Carnegie Hall.

“So he had it for about six months, and then the Fiesta Red turned up, so he put it into a shop called Crowley’s in Cork, just down the road from my great-grandmother’s pub that Rory lived above with his mother and my dad, and he got it on hire-purchase.

“He had a beat-up old Italian Rosetti that was his first guitar and so he traded that in, got the guitar, and was doing the showband stuff with it, and yeah, he just saved up all his wages and paid it off in instalments.”

Even for a guitar that was used as heavily as it was, however, Rory’s Strat is famously, remarkably worn and beaten up – and while received wisdom often lays the blame at Rory’s propensity to sweat on stage, the reality is actually more interesting…

“The start of the wear would have been around 1965 or ’66, when the guitar got stolen,” says Daniel. “They actually did a little piece on Ireland’s version of Crimewatch! It was very condescending, it was this thing on RTÉ called ‘Irish Police Watch’ or something like that [It was actually RTÉ Garda Patrol – Ed] and it was like, ‘Oh and a young man with long hair has had two of his guitars stolen…’ – I think it was the Tele and the Strat – ‘If anyone sees them, they look like this…’ and a picture went up on the screen. I really want to find that footage from RTÉ’s archive!

“But they got dumped in a ditch about two weeks later, because the guy couldn’t sell them – obviously! They’d been on telly, and it was probably the only Strat in Ireland, there probably weren’t that many Teles, either – so they were going to be hard to shift!

“So because they were too hot, he dumped them in this ditch, where someone found them and two weeks later, Rory had them back. But I think it got a bit of water damage from that, and probably a lot of scratches from brambles and all that, plus Rory’s constant playing of it just wore it away!”