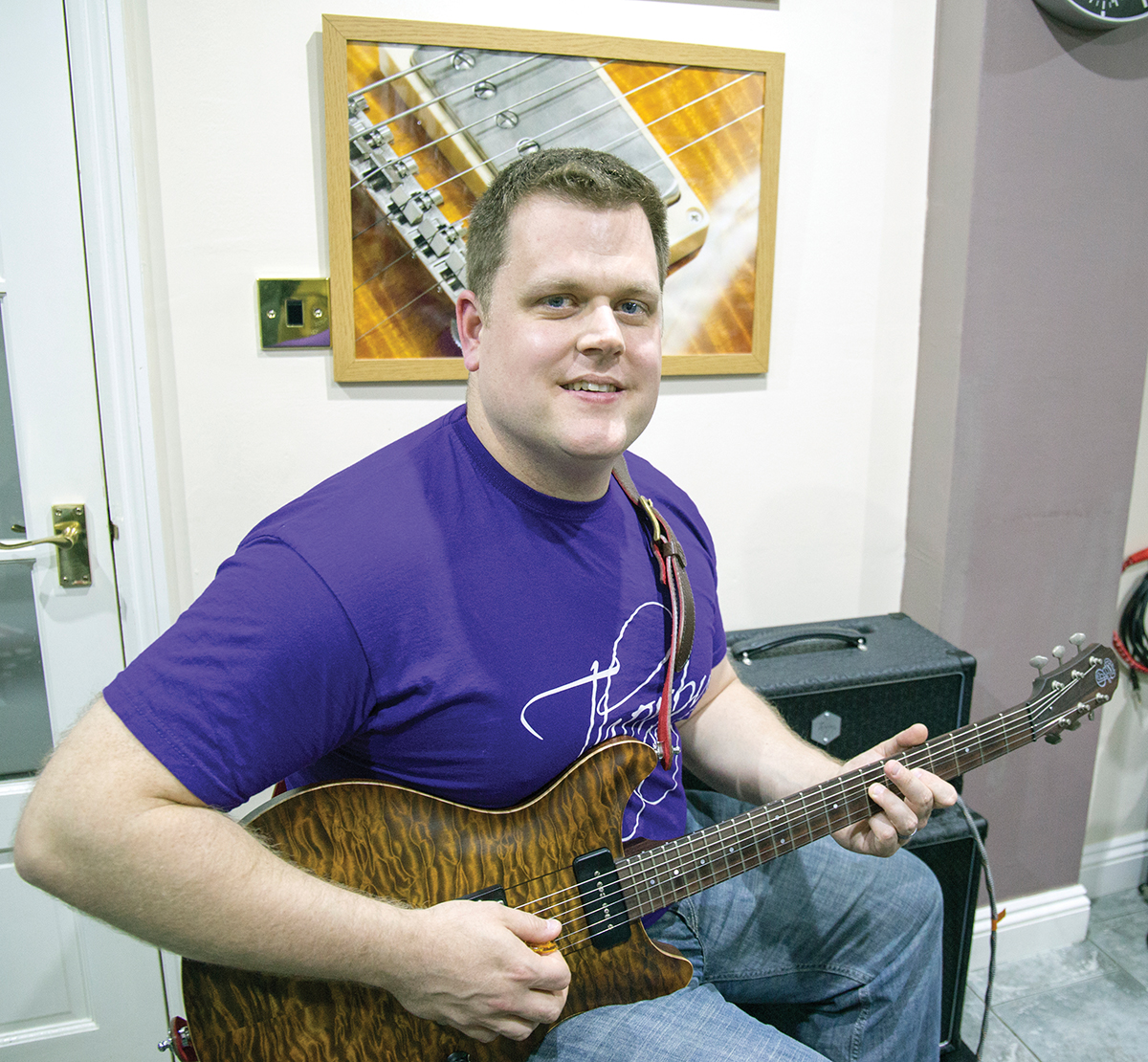 British Army Major and explosive ordnance disposal expert Adrian Thorpe MBE set up ThorpyFX in 2014 and has consistently wowed us with his high-quality handmade creations.

The Gunshot Overdrive, Fallout Cloud fuzz and Warthog overdrive/distortion all landed G&B Choice awards, with the Peacekeeper low-gain drive also impressing. Since then, Adrian’s added the Chain Home tremolo to his range, and we have no doubt that he’ll continue to impress us throughout 2017.

Your route to becoming a pedal maker was far from typical. How did you come to be involved in the world of guitar effects?

“When I first commissioned into the Army, I found myself living away from home with a lot of spare time, so I started to experiment with buying pedals and it quickly became an obsession.

I was trying all sorts of pedals, but I was desperate to nail the vintage tones of Brian May, Eric Clapton and Tony Iommi. All three legends seemed to share the same secret, the Dallas Rangemaster! So I decided to build one. I sourced all of the parts, including the OC44 transistor, vintage caps, etc. I was blown away by the result!

This started a different obsession – I wanted to build as many circuits as I could. Quickly, I built up a massive amount of self-built pedals, so I started getting requests from friends to build certain circuits.

Eventually, the pressure to build my own designs became too strong an urge to resist, so the day after our wedding Georgia and I agreed to start ThorpyFX.”

The components in your pedals and the workmanship are of a consistently high grade. Is that a key part of ThorpyFX’s ethos?

“Well, I am obsessive over details. I like to ‘sweat the small stuff’. Bearing that in mind, I wanted to ensure my pedals were as well built and consistent between units as they could be.

To do this involved using basic engineering principles, one of which was to reduce variation between units by narrowing the percentage difference between components.

I also wanted to reduce the noise floor of the circuits to ensure the effect isn’t covered in a wash of hiss. This sort of attention to detail doesn’t come cheap, however it is worth it for me and it’s something I will not compromise on at all.

If the pedal design doesn’t meet my exacting standards, then I will not release it.”

Talk us through the ThorpyFX range…

“We currently have five pedals. The Gunshot was our first pedal and is our take on a British-style drive. It’s articulate, mid-focused and amp-like, owing to the cascading gain stages. The Warthog has similar cascading drive stages to the Gunshot, but has a more American tonality.

It can get a lot dirtier, and a lot cleaner than the Gunshot. The Fallout Cloud is our take on a four-transistor silicon fuzz, but with a much more powerful active EQ. The Peacekeeper is our take on a low-gain overdrive and has a split active EQ with the mids/presence control sat pre-drive and the bass and treble post-drive.

The Chain Home is our latest offering and is our take on the vintage Vox Repeat Percussion tremolo circuit, coupled with an amazingly versatile booster.” 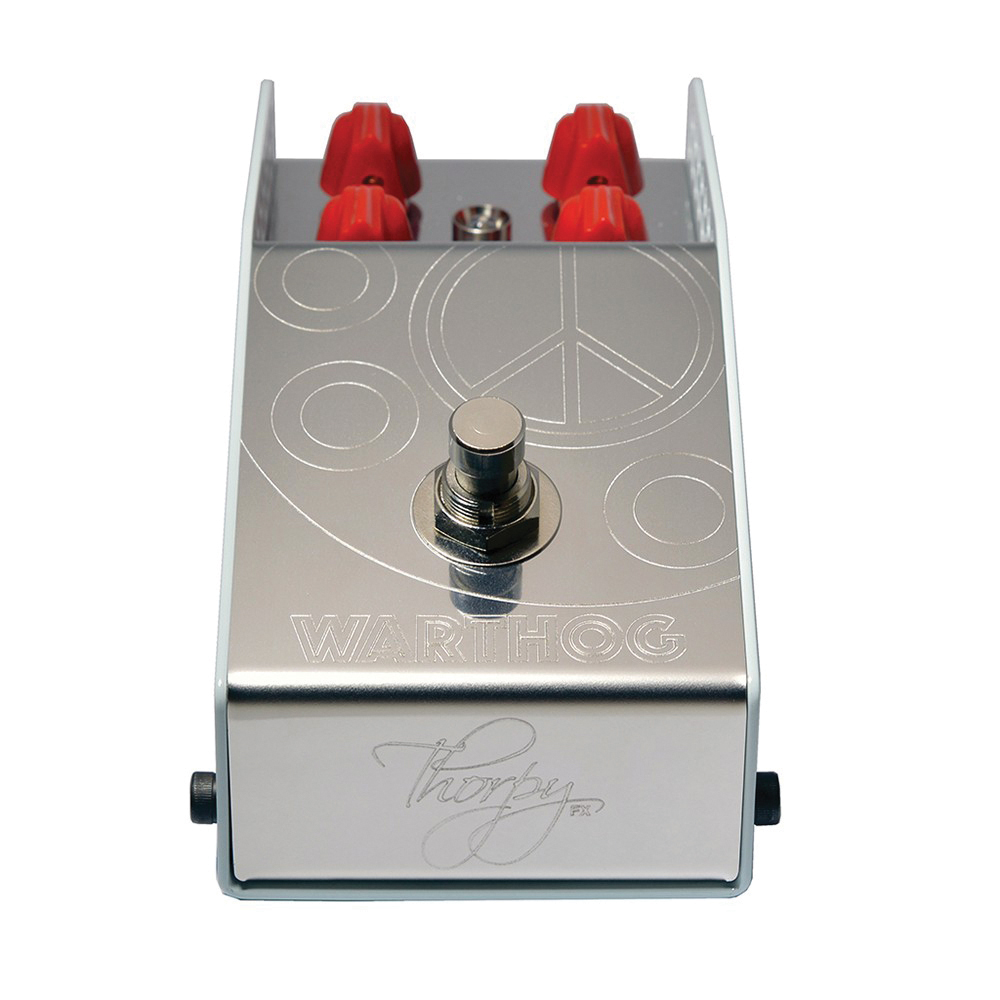 The Fallout Cloud has been immensely popular. It’s designed to overcome some of the frustrations we all experience with many fuzz pedals. Is it your biggest achievement?

“I’d say so yes. It’s our flagship pedal, it has been universally praised and has won awards on both sides of the pond; we are massively humbled and grateful to our customer base. We had a real eureka moment when we managed to get the EQ we wanted to solve all the shortcomings of that style of fuzz.

The best bit, though, was when I was able to set the EQ to match the vintage unit I had to test against, I genuinely couldn’t stop playing the thing!

Thankfully, thousands of the guitar-playing community share the same joy with this pedal as I do.”

We really like the Warthog, and it reminds us of a ProCo Rat, but crucially it doesn’t sag and disappear in a band mix. How did you achieve that?

“A vintage Rat is a joyous pedal to behold, but I found the compression within somewhat frustrating. The Warthog utilises some of the same ideas, but it’s designed to be a lot more open.

I have done this by reducing the gain in the overdrive section and designing the clipping circuit to have much higher headroom. The Warthog also has a cascading gain arrangement similar to the Gunshot.

This means that despite the lower gain in the drive section, adding the calibre (up to 25dB of boost) increases the distortion available, but allows the circuit to remain open. Doing things this way means the Warthog can go from a clean boost all the way through overdrive, distortion and into fuzz territory.

The end result is probably one of the most versatile pedals on the market and it sounds stellar in a band situation, too.”

What inspired you to make a tremolo?

“I’d been listening to a lot of Spacemen 3 and wanted to get that interesting tremolo sound, but didn’t want to clone anything that had already been done. So the Chain Home was a nod to the vintage circuit, but wrapped around a really fantastic clean booster.
This means you can get some subtle trem wash sounds and give your amp a kick in the backside, too – unusual for a tremolo as they often seem to lower the perceived volume of your signal. I also wanted to give people a solution if pedalboard real estate is an issue.”

Tell us about the collaboration with Dan Coggins…

“I’ve been great friends with Dan [designer of Lovetone pedals] for years. Over the summer of 2016, we got together and collaborated on a number of modulation designs.
These are going to be unique takes on classic analogue modulation effects like chorus, flange, phase, etc. I am in the final stages of getting these nailed down so that I can be 100 per cent happy to release them.”

For more on ThorpyFX head over to their website.