We sit down with the band’s slide-guitar hero extraordinaire Chris Turpin to check out the jewels of his enviable guitar collection and hear about a lockdown album with some famous special guests.

Conceived on the road, Click Click Domino builds upon the duo’s impressive Ethan Johns-produced 2019 debut album Chasing Lights. Inspired by the backdrop of smalltown America, it’s drenched in the imagery of barren landscapes, heartbreak, cheap motels and thousands of dusty desert miles in the rearview mirror. Yet it all began in the UK, with the pair first meeting while studying music at Bath Spa University in the early 2000s and going on to form the alt-rock quartet Kill It Kid. Record deals and critical acclaim followed but by 2015, it was all over.

Chris (vocals and guitars) and multi-instrumentalist Stephanie soon formed Ida Mae and relocated to Nashville with a much simpler remit. “When we started Ida Mae, we always wanted it to be a very pure project,” says Chris. “Simple guitar, good songs and vocals, stripped back from the excesses of a traditional rock band. This record we self-produced out of necessity, but feel it’s a very honest document of our last few years on the road.” 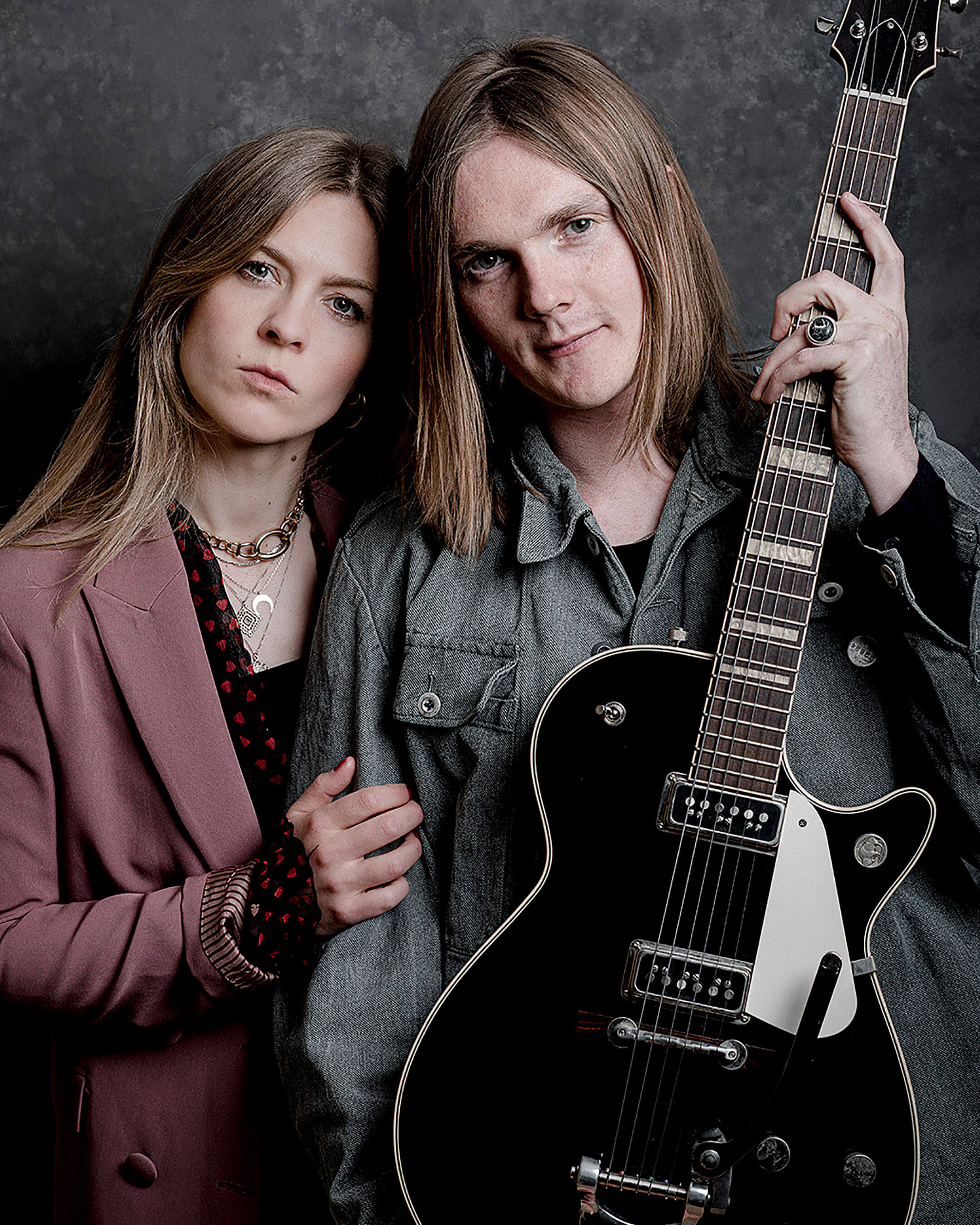 Drawing equal inspiration from the rich well of Chess Records heroes such as Muddy Waters and Bo Diddley, the picking of British folk legends John Martyn and Bert Jansch, and country blues trailblazers Charlie Patton, Fred McDowell and Memphis Minnie, Chris Turpin is a songwriter and guitarist richly versed in the instrument’s history. Yet he’s unburdened by pretentiousness and unafraid to blend rare vintage instruments with modern technology when the need arises.

“We recorded everything but the drums and bass at our home in Nashville during lockdown,” says Chris, of the Click Click Domino sessions. “Our longterm friend and producer Ethan Johns later added acoustic drums at his home studio, and our bass player Nick Pini added his bass at home too. It’s a proper lockdown record, in every sense!”

While Ida Mae write and perform mainly as a duo, the new album also features some other notable musical guests. “Marcus King is a friend of ours and he came over to record some guitar parts on the songs Click Click Domino and Deep River at our place in Nashville after lockdown had eased a bit. He used my Gretsch Vintage Select ’53 Duo Jet that I string with flatwounds, into a 1960 tweed Fender Champ with a Z.Vex Box Of Rock. He just nailed it!”

Picking up the very same Duo Jet for our perusal, Chris reveals that it was also the weapon of choice for another cameo appearance: “Jake Kiszka from Greta Van Fleet also used it for some parts he played on the songs Long Gone and Heartworn, again through the Tweed Champ.”

“It’s a wonderful instrument,” Chris enthuses. “I used it all over the record. The main riff on the song Click Click Domino is the Duo Jet through some funky effects. Gretsch were great in getting this guitar to me a few years back, along with this stunning 6120 [G6120T-55 Vintage Select Edition ’55 Chet Atkins], which I also string up with flatwounds. Thanks, Gretsch!

“They are both such beautiful guitars that I’ve compared to some vintage ones and they definitely hold their own sonically. I really love the sound of the Dynasonic pickups. They are the sound of early Howlin’ Wolf and Bo Diddley, and with flatwounds on, it’s the sound of those magical early Chess records.”

Locked down they might have been, but the duo were indeed fortunate to have most of their musical equipment and road gear with them at their Nashville home, and they soon set about recording new material in their impromptu home studio. With time to experiment, Chris and Stephanie decided to expand on their previous sound by including a range of new instrumentation. Or new to them, at least.

“We wrote and recorded with some unusual instruments we found during our travels on the road” Chris reveals. “Sonically, we thought it would be interesting to blend the textures of some vintage American instruments like a banjolele and mandolinetto with our resonators and some vintage 60s and 70s drum machines and more modern synths.

“This Oscar Schmidt flat-top mandolinetto was used to write and record the song Learn To Love You Better. I mixed it with some modern plugins and a 1970s drum machine, but it works well. The first song on the album, Road To Avalon, features a banjolele riff with some synth and Mellotron. Most of the songs were cut in three or four takes, and we wanted to combine these early American instruments with the resonators to give a real unique Americana sound”.

Featuring prominently on the record is Chris’s National Style O Replicon. “This is my number one,” says Chris. “This guitar I got when we started Ida Mae. We knew we wanted a guitar that was kind of the third member of the band, sonically and visually. I’d always loved resonators and one New Year’s Eve a few years back we were having a party. We’d just been offered a deal with Decca so we had some money coming in, and I saw on Denmark Street they were having a New Year’s Day sale and this came up. We drove down that same day! It’s a National Style O, part of their Replicon series, and it’s the best-sounding one without a doubt.”

Resonators are not without complications when it comes to amplifying them for a live audience, and given that Chris has performed with his National at venues ranging from intimate clubs to huge area shows, we quiz him on his approach.

“We use small amps and have quite a quiet stage volume to help combat feedback issues,” he says. “I have pickups in my resonators and this Style O has a National Hot-Plate which means you don’t have to drill the actual guitar, you just screw it on and play. This hotplate is steel and that changes the sound; there’s more high harmonic content than the brass one that was on there.

“It’s not the same as a microphone, but they do have a very cool sound. I often run them through a small pedalboard and amp setup. This early 1970s silverface Champ is my favourite – it’s small and light enough to be taken onboard a plane as hand luggage. I just put it under the seat in front, and because all these old amps were built so well they just stand up to the road really well, and are easy to repair if something does go wrong. I can solder and work out what’s wrong with something simple like this circuit, but a modern PCB complicated amp, I’ve got no chance!

“The pickup that’s in the Style O now is actually new, it’s a Lollar. I put this in last week, it’s actually a dogear P-90 that I had to take the cover off to fit. They normally have Telecaster neck pickups in these Hot-Plates but I wanted to try something else. This is the guitar that I use constantly on the road and its essential for our sound. It’s had a life, a few bumps and bruises from the road but it’s the best one I own I think. Inspired by Bukka White I stuck some old American coins on the headstock.”

Other notable sonic contributors to the album include a rather mysterious parlour-sized acoustic labelled “Waialae”, which Chris remembers finding the back home in England. “This weird little acoustic I found in Lowestoft near where we were regularly playing in a local pub,” he recalls. “Nobody seems to know much about it and I can’t really find out much. It’s got Waialae on the headstock, which is a Hawaiian Island. It seems to be made of birch and has an Adirondack spruce top with a huge neck.

“It might be a Regal or a modified nylon string or a rare Hawaiian builder, but it’s a complete mystery. I don’t know how it got to England, maybe it was a serviceman who bought it over as there were a lot of US airbases near there? I use it live all the time and it weighs nothing, which is a nice change from the resonators!

“I’ve toured with it all over the world and it’s been super-stable, the neck hasn’t moved and I’ve not had to do a thing with it. I have fitted an LR Baggs M1 active sound hole pickup, which gives a really detailed sound, but when recording I’ll mic it up. You can really hear its natural tone on the song Calico Coming Down on the new album.

“I’d wanted a parlour acoustic for ages, inspired by the playing of John Martyn and Bert Jansch, but also Robert Johnson, Rev. Gary Davies and that whole style of county blues. Lots of my early guitar playing I got into was this sort of ragtime with the thumb pick, which is still a huge influence today.”

Another electric to feature on the record, particularly for slide parts, was an early 60s Silvertone 1445 Speed Demon, with cowboy art painted on the back by renowned Nashville artist James Willis. “I got it when we were touring and took it that night to a gig,” Chris tells us. “We asked the crowd what we should name it and the guitar was christened ‘Maple’ thereafter!

“I love the sound of the ‘speedbump’ pickups. You’ll hear the sound of that guitar in the rhythm part of Long Gone and Heartworn, where I ran it into two amps: the Silverface Champ and a Magnatone 410 from the 60s I was going for a real early punky sort of tone.”

“I approached National maybe five years ago after seeing a picture of a 12-string resonator from the 1930s. It’s un-plated brass and they said this was the first time they’d etched directly on to the metal. It sounds so big and warm, like a church organ through an amp with the National slimline pickup. It’s great! I’ll be taking it on tour as soon as we can go.”

With a new album to promote and thousands of miles already clocked up, we’d expect nothing less from this hardworking duo.