Your Board: Andrew Bentley’s versatile rig for late-60s tones and beyond

This reader shares his fondness for UK-made gear, including a certain OD box sporting a radio mast decal. 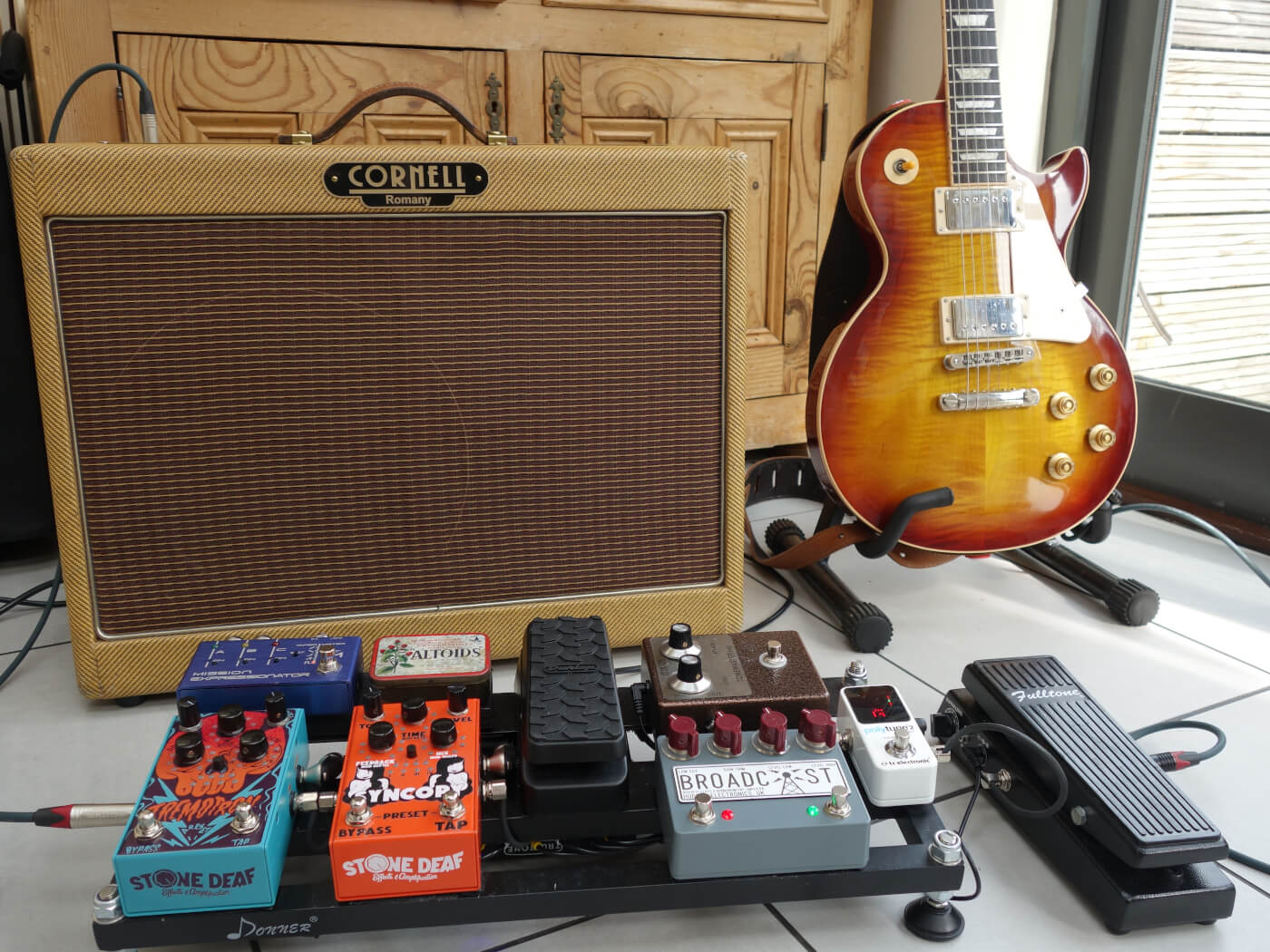 Hi Andrew! Tell us about yourself as a guitarist.

I started playing when I was about 19 and was self-taught for a couple of years. After this, other interests took over and I hardly picked my guitar up until about three to four years ago when my eldest daughter was born. I’m 37 now and pretty sure it was some kind of midlife crisis. Since then, I’ve taken a few lessons and play in a band with some friends. I’m interested in all sorts of styles really but always end up coming back to the British Blues Movement. That era was obviously so pivotal in defining how guitar-driven music was shaped for the next few decades. I find it fascinating. 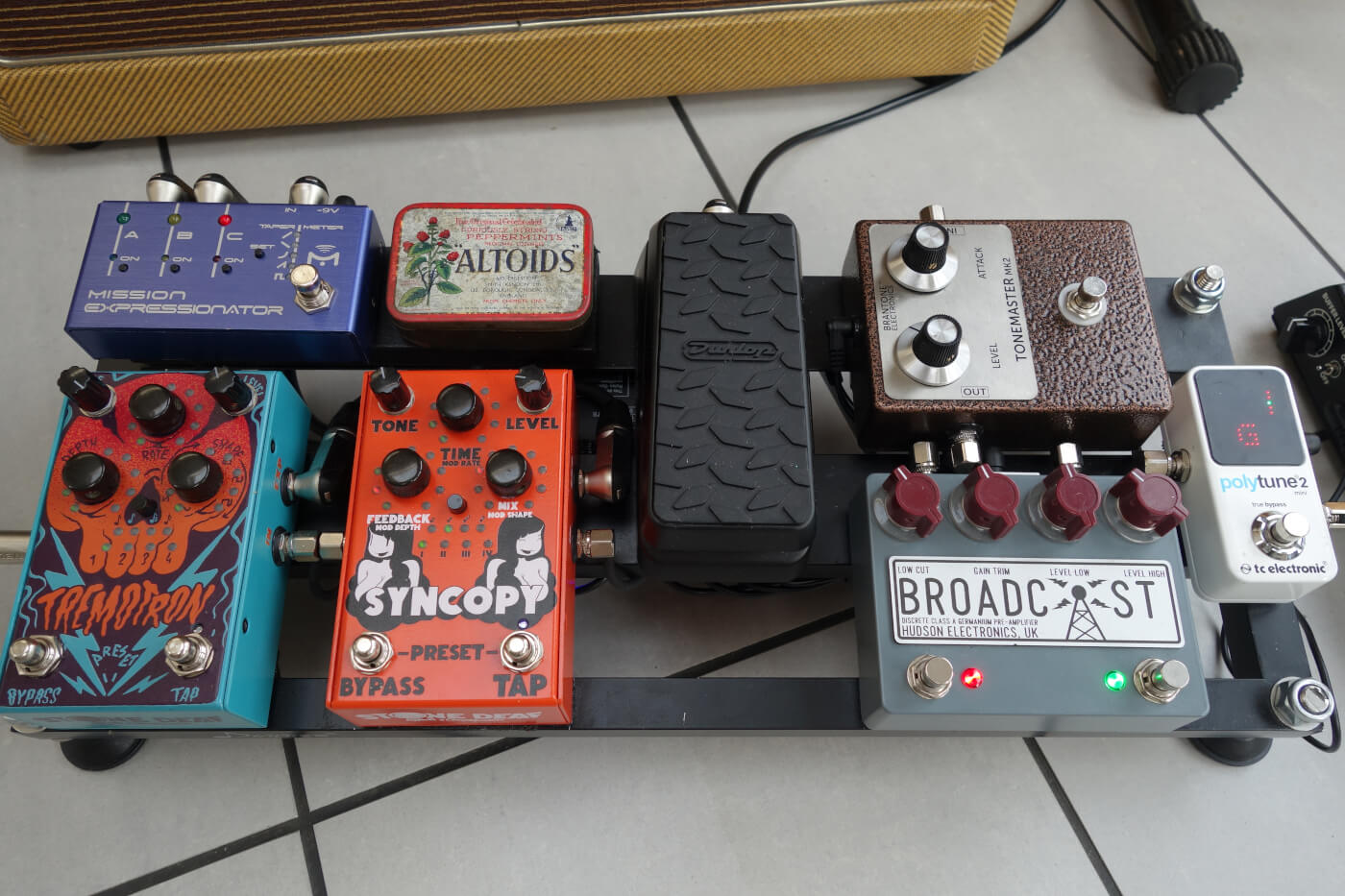 Like a lot of people say, It really is a journey and a learning process but I’m super happy with what I’ve got at the moment and have no current aspirations to change anything. I’ve tried to keep my setup as simple as possible. It’s essentially just a wah, overdrive, fuzz, tremolo and delay, but [I’ve] done a couple of things with this setup which makes it really nice to use at jam sessions. I’ve used UK-made stuff in my whole setup where I can as we have some great builders here.

[I have] a Fulltone Wah [which] is just great and built like a tank. [I also have a] Brantone Tonemaster which is, unsurprisingly, a Tone Bender circuit with vintage transistors. It’s beautifully made and is an absolute beast. The Hudson Dual Broadcast is simply the best pedal I’ve ever played. I run it at 18v with the low-gain side set as a very light overdrive and almost like a buffer. The high gain-side is set as a pretty meaty overdrive which I regulate with the guitar volume.

The Stone Deaf Syncopy delay and Tremotron Tremolo sound fantastic and I bought them for the presets, tap tempo and expression control. Using them together with the Mission Expressionator and Dunlop DVP4 Mini, I can get a really wide range of sounds at my feet without having to reach down and faff with the pedals between or during songs. This was an idea I had for a while and I’m really pleased with how well it works.

Mostly late-60’s Page, Beck, Green. That said, my setup covers a surprising amount of ground beyond this, even though its’ quite simple.

I guess just the age-old problem of trying to get satisfying results at home volume levels. I’m considering various options to try and improve this and have experimented with digital solutions which can sound pretty amazing but ultimately always end up compromising on ‘mojo’ and leave me a bit uninspired. This is obviously completely personal though.

What pedalboard, power supply and cables to you prefer? 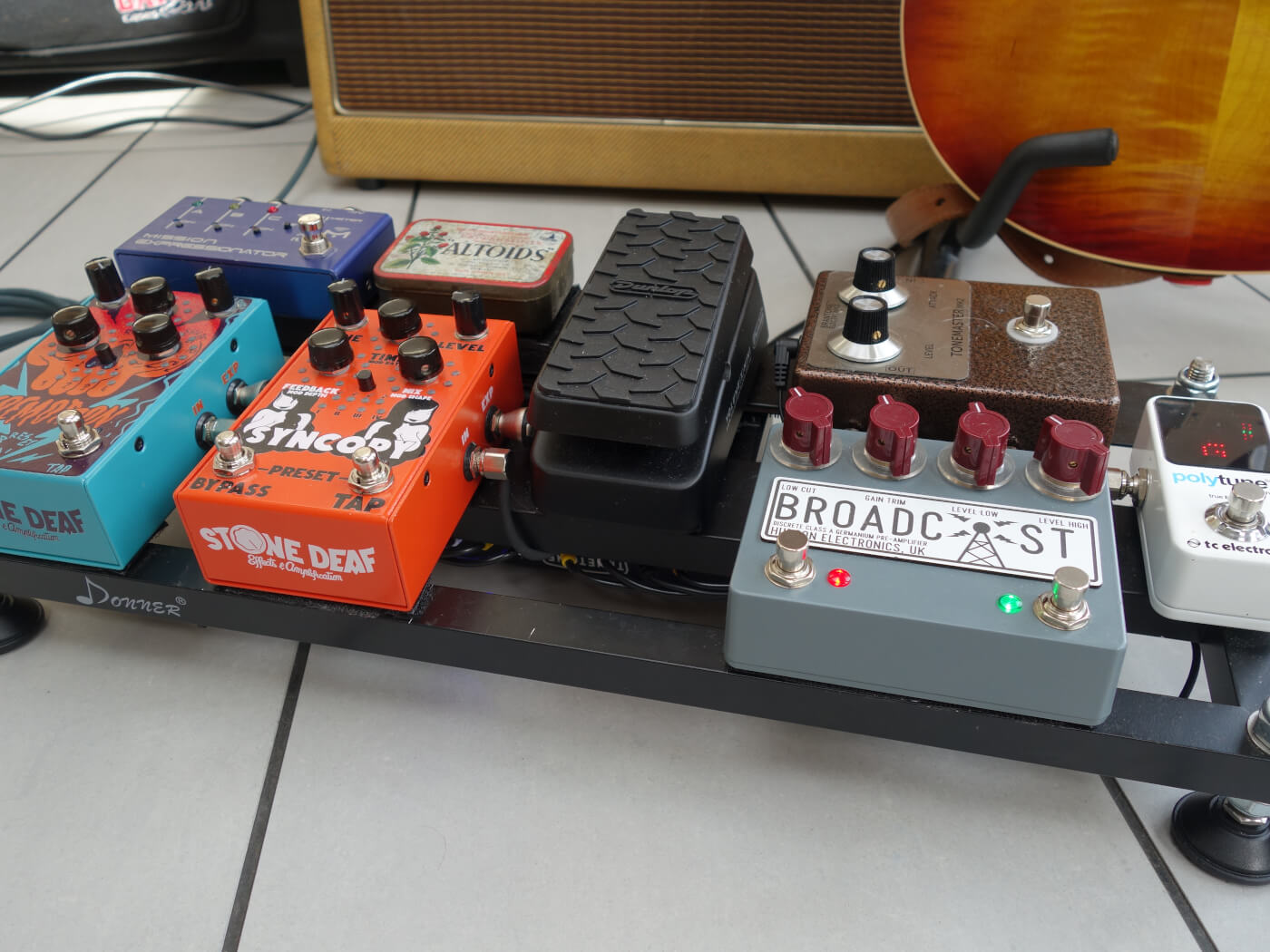 I’m using a Truetone CS7 and Evidence Audio cables and I’ve got no complaints about either of them. The fuzz is a vintage Tonebender style circuit and unsurprisingly, worked better with a battery. This was a bit too much of a faff for me so I’ve utilized a Gigrig Virtual Battery.

Probably an original Echoplex or one of the modern Fulltone tape echos. There is something magical about them.

I’ve found That Pedal Show to be a fantastic resource of quality information over the last few years. I’d just warn anyone [not] to get too carried away as it’s all too easy to spend thousands of hours and thousands of pounds faffing around with sounds and forget that actually playing and being creative is where the real enjoyment lies.

A Gibson Les Paul Trad with Monty’s PAFs and 50’s wiring. I’m a one-guitar guy and trying to build a real bond with it.

[A] 20-watt Cornell Romany Pro. The previous user fitted a Fane A60 alnico speaker which is glorious. It’s the second Cornell amp I’ve owned and I love it.