“Digital amps will probably be obsolete in 10-20 years because they just won’t be fixable”: amp tech Colleen Fazio

Los Angeles amp tech Colleen Fazio is gleefully sharing analogue knowledge in the digital age, and earning an impressive number of followers in the process. 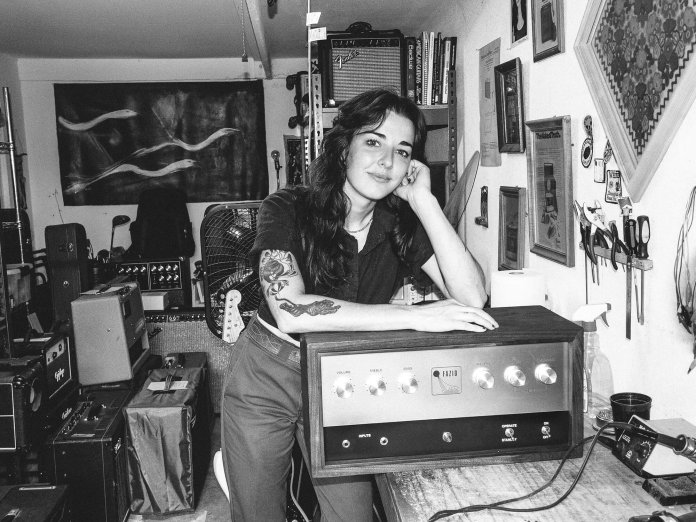 As we find ourselves thrust deep into the digital era, one hoary old amp dog after another has opined that we’ll likely lose our understanding of analogue circuits entirely if the knowledge isn’t handed down to the next generation. One problem, though: “All of the electronics classes that are available in schools are really focused on digital. It would be so cool if there was a resurgence of analogue circuit classes in the future.”

But that’s not from your jaded old repairman down the back alley at Jimmy’s Thermionic Valve & Radio Service. These are the words of Colleen Fazio, a diehard 26-year-old analogue nut at the heart of the next generation of point-to-pointers. An experienced amp builder and repairperson working amid one of the world’s hottest music scenes, Fazio has some 35,000 YouTube subscribers and commonly earns more than 125,000 views for her instructional videos. What, are there even that many people interested enough in guitar amp repair to watch a video on the subject? Apparently so – and we amp nuts should be grateful that there are.

Starting with the basics

Born and raised in Illinois, Colleen Fazio’s fascination with the instrument began much like that of many kids: on the heels of an uncle who plays the thing.

“One of my uncles always had some guitars lying around his house,” she recalls. “When I was little I always wanted to pick them up and try to play them, and he realised that I had an interest in music. So, for Christmas when I was seven years old he bought me a tiny little acoustic guitar.

“I started taking guitar lessons, and my first teacher was classically trained so I started with classical guitar and learned how to read music and everything. I kept going with it until about middle school, when I was playing guitar in the jazz band for the sixth and seventh grade and then our bass player left to go to high school, so we needed a bass player. In jazz band, bass is way more important than guitar! So, my teacher asked if I would want to switch to bass and I gave it a try.

“It kind of was a natural change for me; I really enjoyed it. From that moment on I primarily became a bass player. All the bands I was in in high school and after I played the bass.”

Fazio graduated from high school at 18 not entirely sure what she’d do with herself – lived in Chicago for a time, playing in bands and following that path – and then at about the age of 19 she realised she was being inexorably drawn to the gear itself. 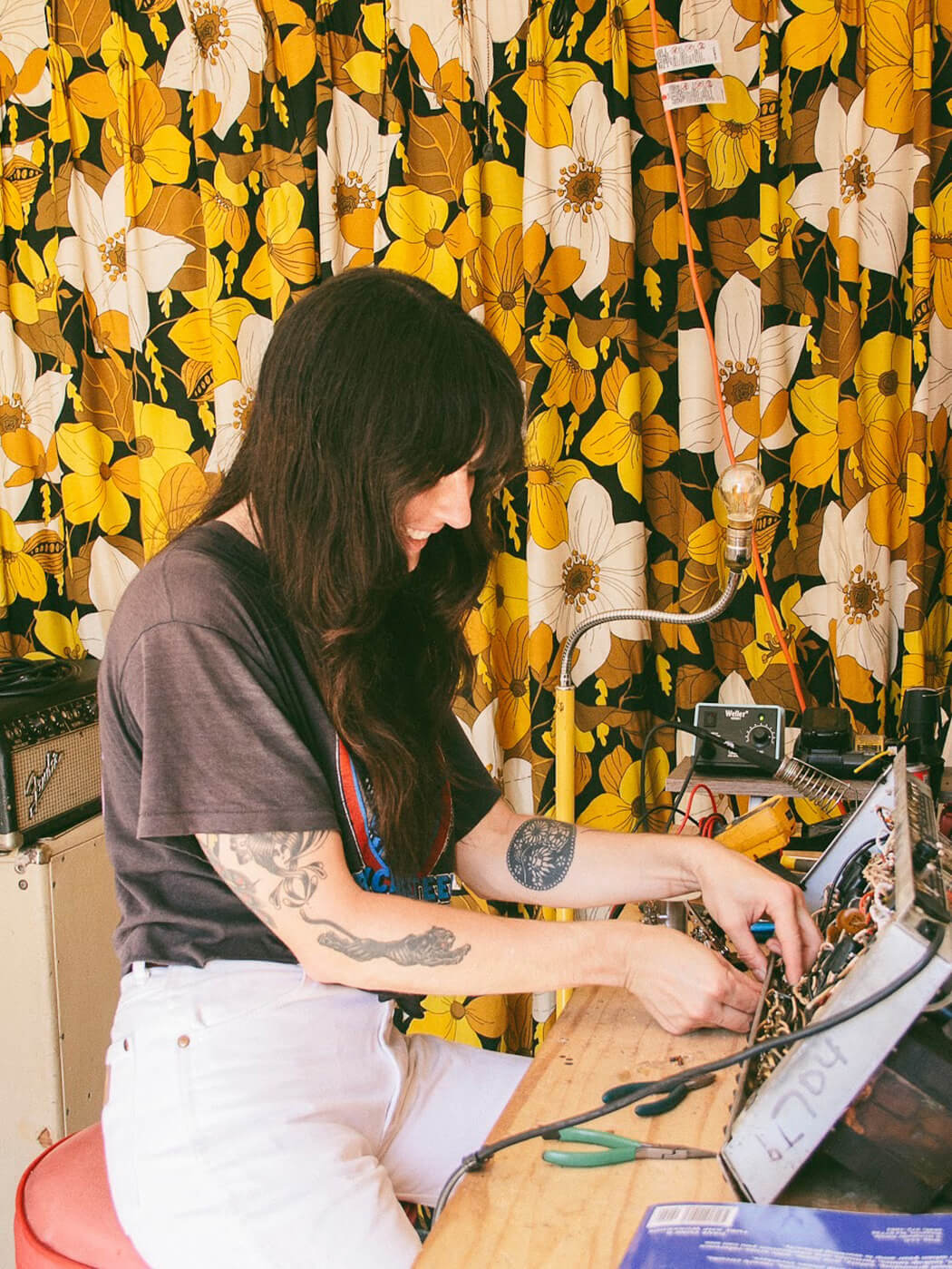 “I was kind of interested in learning about either guitar tech’ing or amp tech’ing,” she tells us, “so that’s when I started exploring both and I ended up being drawn more into amps than I was into guitar tech work. Part of the reason was that my uncles had built amps before – they’re they guys behind Vero amps – so that was always around. One of my uncles taught me how to solder and how to use basic tools like wire cutters and so forth. It was all a learning experience at that time.”

Once the amp bug took hold and she’d had some experience under her belt, much of it gained at the Illinois repair shop Deltronics under the tutelage of owner Mike Delvalle, Fazio took her skills to the West Coast to set up her own shop in the Los Angeles neighbourhood of Atwater Village. She tells us the style of Vero models like the Chicago Zephyr and the 20th Century Limited – which were among the more hardcore vintage-retro designs when they arrived on the boutique scene more than 20 years ago – has influenced her own tastes, as much as she’s absorbed what she can of the skills that went into making them. Having built several of her own amps for sale she hopes to get back into the making and designing herself soon, but for now the tech work has been too demanding to allow much time for anything else.

“It’s cool being in LA because there’s so many musicians out here and a lot of people who collect, so I’m really able to see amps that I’ve never seen in person. It really is the hub. That’s pretty much why I came out here – just to be around as much gear as I possibly can.”

Part of what she’s been enjoying is getting inside the history of all those old amps that guitarists are still using out there, many of which were manufactured by companies based just a stone’s throw – or now a bumper-to-bumper commute – from her own workshop.

“The first time I opened up a tweed Champ that was all original,” Fazio says, “and I saw all the beautiful orange capacitors and everything that just looks old and kind of screams ‘history’ to me, it was amazing. I love thinking about all the things the amp has been through. The last time this amp was opened up the world was a completely different place, you know? And now I open it up in 2021 and it’s so different, but the amp is still the same.”

Stemming from that, Fazio has observed a new fondness among her generation for things you can touch, hold, feel. The concrete objects of value that present a physical counterpoint to the analog and ephemeral that has come to dominate much of modern life. It’s much the same attitude that has informed today’s maker culture, and it has its offshoot in young guitarists who are discovering the value of otherwise archaic tube technology.

“I think a lot of builders, technicians, even a lot of players are learning more about what makes their amps work and what makes them reliable and so forth, and people definitely recognise that the mass-manufacturers are making amps very digital, amps that will probably be obsolete in 10, 15, 20 years because they just won’t be fixable. So, I think a lot of people are taking pride in building things that are going to be able to last for 50, 60, 70 years just like an old Fender amp. I think that is really important.

“And in particular, there are a lot of podcasts and social media groups that are all focused on vintage amplifiers and vintage gear, and people are wanting to learn more about them. And I think that’s so cool because people are really going to take pride in having that kind of equipment.”

Among the more fascinating jobs to come across her workbench have been a late 30s/early 40s Gibson EH-185 combo – “It was so cool because it came to me all-original and it was in very pristine shape” – and an unusual Premier 76 resplendent in that model’s mid-century aesthetic. But she also appreciates the value of the latter-day workhorses that continue to enable thousands of guitarists to get the job done, and is just as happy to help bring a late-70s silverface Fender back to life.

“That era of Fender, I really like how they maintained the integrity with all handwired stuff,” says Fazio. “They introduced a lot of cool features. Some of the later silverface Fenders have the boost switches, or even later in the 80s they had the extra gain stages on the second channel and all that stuff is really cool. And they did it in the Fender way, where it’s as simple as possible but it still sounds very good.

“They started switching to PCB obviously in the later 80s or early 90s, but even their PCB amps, for the most part, are easy to work on and they’re able to last for a while.” 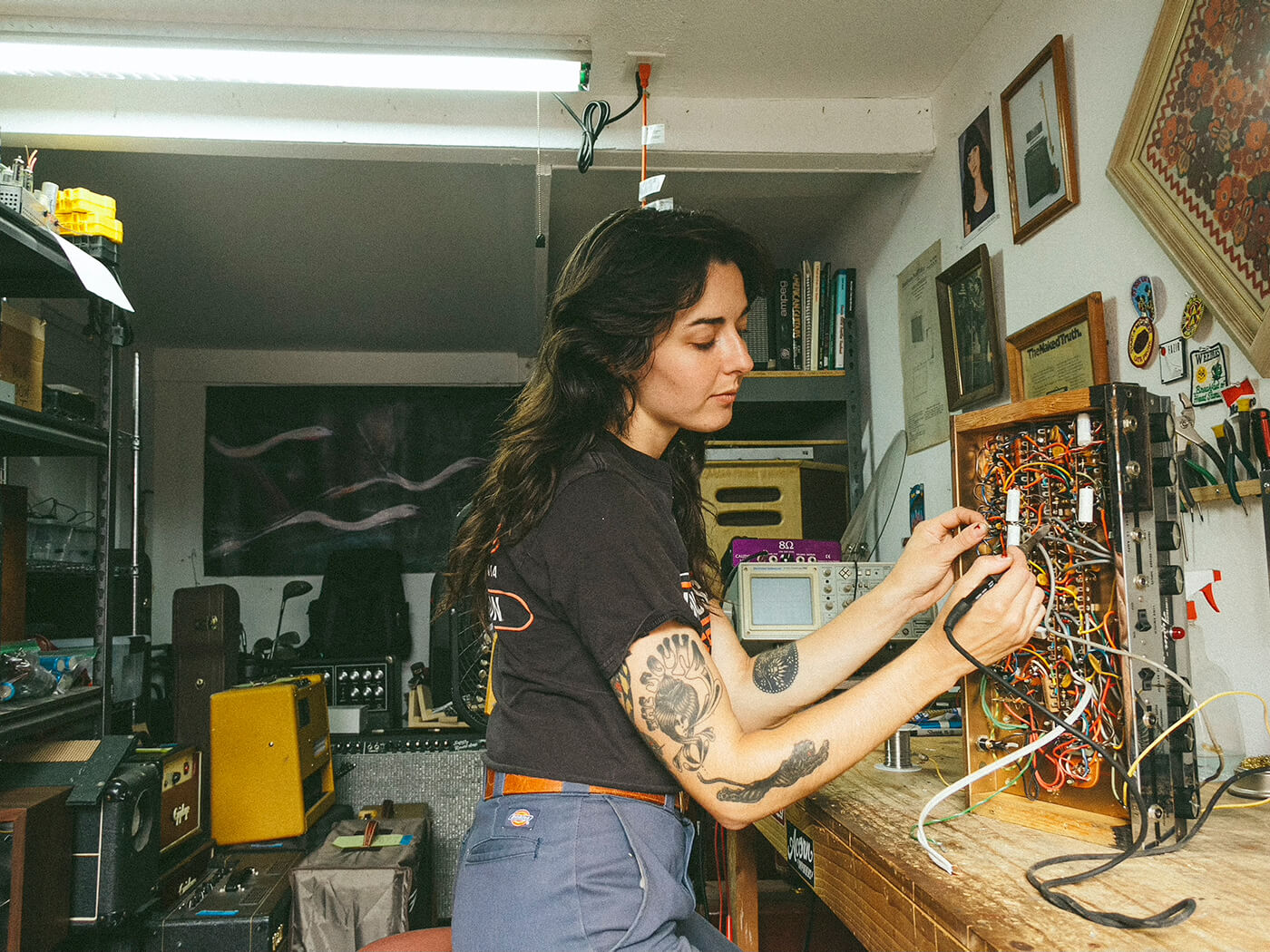 Fazio has launched into designing and building her own models with some success, and is eager to get back to that once her tech’ing demands ease up enough to allow it. As with many small-shop builders, she started out reworking circuits based on classic Fender models, but her love of simplicity and willingness to make small changes to effect significant sonic gains has helped her bring more creativity to the venture, too.

“I always recommend to people who are interested in building, ‘Build a Champ kit, or a Deluxe, or a Bassman…’ because that’s a great way to learn about how amps work and how they colour their tone and everything like that, so pretty much my builds have branched off that. I’ve kind of coloured my preamp in a different way, and I’m still in that R&D stage where I’m just figuring out things and deciding exactly what I like. I love clean tones, but I also love a little bit of crunch, so I would like to have a personal design that would offer both of those characteristics.

“The most recent amp I built was a custom job, it was a Silvertone clone for a client. Basically I just went off of the original Silvertone design, I believe it was a 1484, and I built it and made a couple of changes to the preamp to combine Fender and Silvertone characteristics to make it sound good to me, and that was really fun. There’s really nothing wrong with going off those old designs that are just tried and true. I mean, there are always ways to upgrade, and I think that’s where the creativity comes in. It’s a journey, for sure.”

Rewind the scenario three decades, two decades, maybe even just one, and the headlines to Fazio’s story would likely be all about the unavoidable observation that she’s a young woman working in what has traditionally been an older man’s field. As we’ve seen on so many other fronts, though, the times they are a-changin’.

“I’m very pleased to say it’s mostly been that everybody’s very respectful and encouraging,” she tells us. “I mean, every once in a while I’ll get a misogynistic comment or whatever, but it’s fine, it’s to be expected. But really everybody is so cool and so excited and encouraging, and I’m really thrilled with the community. Everybody’s been really great, and I’m very happy about that!”

So, there’s some hope yet for humankind, perhaps, and maybe – as tangential as it might seem – Colleen Fazio’s enthusiastic reception among the ranks of solder-sniffers is some small sign that we really are getting somewhere on the gender-equality front.

“I think so,” she confirms. “I think it’s more common to come across a woman doing what was traditionally a male-dominated thing, and it’s more accepted that it’s just ‘normal.’ I think it’s all about awareness, and everybody’s just kind of doing their thing, and it’s great. And there are more women in the technical side of the music industry starting to come up, which is really cool and exciting.”