“Punk can be anything”: Amyl And The Sniffers’ Declan Martens

The Amyl And The Sniffers guitarist has a message for the punk purists. 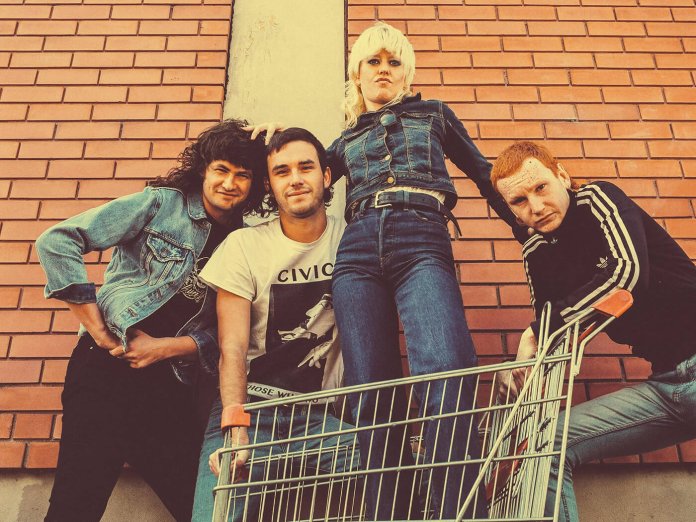 Amyl And The Sniffers are one of the hottest acts from Down Under at the moment. The Melbourne-based band have gone from a bunch of housemates recording in a bedroom with loaned gear to an explosive punk outfit known for their blistering live performances. Their stellar showing at South By Southwest earlier this year is testament to just how far they’ve come.

The band are now on the verge of releasing their self-titled debut LP, which drops on 24 May. Ahead of this release, we spoke to guitarist Declan Martens about the group’s journey, the upcoming album and the current state of punk rock.

What sound are you after with this band?

When we first started, we were pretty much just making any noise that we could make. There wasn’t any sort of main influence on what we wanted to be, musically. We came across as four different musicians, just making what came to mind first. Just being really spontaneous but I think as we’ve improved as musicians, and started to take it a lot more seriously. We now have different ideas about what we want to sound like and stuff.

I’m definitely influenced by a lot of metal from the 70s and early 80s and a lot of Australian rock, and Amy [Taylor, the vocalist] listens to a lot of hip hop, while Bryce [Wilson, the drummer] listens to a lot of punk music and hardcore. So there’s a lot of different influences that come across now, and I think that we try and make our own sound from that.

Tell us more about the new album.

So the new album has 12 songs, and we wrote most of them in our garage in Melbourne. We were sort of desperate for new songs, really, because we needed more songs to fill out our set and stuff. Most of it was written over a month, demoed, and played for about 12 months before we recorded the tracks last year. Three songs were written just a week before we started recording.

What are the themes behind the album?

A lot of the songs are quite different in my head – there are influences of boogie and rock ’n’ roll, which come from a period in Australia during the 70s. We also have some hardcore songs [on the album] which come from a Cro-Mags influence and contemporary hardcore bands as well as The Reason. There’s also one song in there that’s influenced by Queen.

Can you tell us about the Australian Sharpies culture that you fell into as a teen and its influence on your music and fashion?

The Sharpies movement was a 70s Australian subculture that was mainly defined by its fashion and music, similar in a lot of ways to English skinhead fashion, but also quite different. They had really tight shirts, flared jeans and short hair with tiny little mullets on the back – which is a fashion influence for us. The musicians of that time were like Coloured Balls, which had Lobby Loyde, who is pretty much the godfather of Australian rock and Australian hard rock. He pioneered the Australian guitar sound with the way he would attack the guitar – it’s the same way that Angus Young does.

Bands like Rose Tattoo, The Angels, they all came out of that Sharpie movement, and it was an influence on me. I could really strongly identify with this Australian subculture, and apply it to my own identity. I really fell in love with the music, and the style, and the fashion, and the sound. I was really proud of this subculture and I wanted to revive it, and that became the influence in Amyl And The Sniffers.

The previous two EPs were pre-recorded at home in Melbourne. What was it like recording the album in Sheffield in a studio?

Yeah, it was great. It was a lot easier and relaxing because you’re there with an intention. When we were doing it in Melbourne, we couldn’t all be in the room at the same time because we lacked the channels to do it. So someone would do a track and then go to work and then someone else would do another track. We would never really ever hear the progress of the song until we listened to it as a band. That’s the main difference. Otherwise, it’s still pretty similar to recording in the bedroom.

With a record deal and Europe tour, do you feel like the stakes have been upped? And how do you deal with that pressure or they choose not to deal with it?

With the [live] performances, it makes it a lot more exciting when there are more gigs and bigger venues and stuff. I think we’ve improved a lot as a live band – and we really pride ourselves on being a live band – so the bigger the crowd that we get play to, the more exciting it is.

But now we’re getting to a point where labels are talking to us about songs that they want to put on the radio. We’re a punk band and that doesn’t come to us naturally – we don’t make such catchy songs so it definitely puts a bit of pressure on us. I don’t want to get too caught up in the whole radio placing. I still want the live performances to come before the radio but I think that’s the pressure of getting bigger.

Let’s talk about gear for a second. Has your gear changed much over the years?

Yeah, the first two EPs were recorded with a Laney 2×12 combo. It was one of those tiny little Laney things, I don’t know specifically. I haven’t played that in years either, it just belonged to our bassist at the time and then as I got to understand amps a bit more, I found out that Marshalls were what I wanted to play. They’re the best – nice and loud, full of power and aggression.

At first, I got a little lunch box Orange amp because that’s all I could afford. It wasn’t too heavy and I could take it on planes. Now that we have a bit more financial support behind us, we hire Marshall amps. So I get a JCM800 – that’s just a classic. All I really need is a master volume and preamp that I can turn up to where I need it. It’s nice and simple like that. Luckily our touring company in Europe has a 1977 Marshall JMP. It sounds awesome, and they always have that amp on hold for me so that’s great.

For guitars, I use a Fender Stratocaster with a Hot Rails pickup in the bridge. I used to have a Seymour Duncan Hot Rails, but now I’ve got a DiMarzio Super Distortion and that’s all I use. Just that one pickup in that one guitar.

Some people feel that punk rockers only need a $100 Squier and a stolen stack. What do you think?

You know, there’s no such thing as a punk rocker who just listens to punk exclusively. Everyone’s got their own influences and stuff. I used to not care, but I think that naivety is limiting. [Becoming interested in gear] allows you to progress. If you can pioneer new sounds within punk, or push the boundaries of punk using gear, then I think it’s a really good skill – really valuable. If you’re a purist punk who doesn’t care about gear, I think you’re really limiting yourself.

In all aspects of punk, there’s a lot of this “traditionalist” sort of idea. And I think it’s really a waste of time because punk doesn’t have to be a certain thing. Punk can be anything. As long as you’re going against the grain, as long as you’re rebelling against something, then it’s still punk. I like the idea of being punk and knowing more about gear than other punk guitarists, although I do know a lot of punk guitarists who know a lot more about gear than me.

Like for example, I used to think wah pedals were not punk, but recently there have been some great punk bands in Melbourne using the wah pedal and I was completely blown away by it. I think maybe I’ll get one now [laughs].

Obviously, distortion and noise are a huge part of the sound. How do you achieve your tone? Is it all in the amps?

Yeah, it’s all the amps. I think there’s just something about getting your distortion from the preamp that sounds so much better than getting it from a pedal. There’s just something about turning up the preamp on a Marshall that feels good – rather than stepping on a pedal. I can’t stand the idea of having a clean amp then stepping on the pedal and having this massive tone.

Has your gear ever been damaged at a particularly rowdy show?

Yeah, definitely has, yeah [laughs]. I mean right now, one of the knobs on my delay pedal is bent and you have to twist it really hard. My stuff has been broken heaps. There was one gig we played in London at the Moth club, and it was the absolute last song, it was the outro and we have this big build-up. During my solo, someone fell on the plug, where the power to my pedals goes, and it snaps. Then there was no power going to my pedals at all.

I was wondering if something had been unplugged, and then I realised [the plug] had completely snapped and was not going back in. So I had to go straight from my guitar into the amp, and it wasn’t buffered at all. It sounded so much softer, but you know, grungier. But I came back in at the right time, so it was great. That’s probably the only time that I’ve had to properly troubleshoot.

Being in Amyl And The Sniffers, we have so much going wrong all the time with gear because the gigs get so rowdy. I’m really, really good at troubleshooting now [laughs]. I can fix my gear in seconds. It’s just something that you have to learn.

You’ve talked a little bit about punk purism. But what’s your opinion on the state of punk in general?

I like it. It doesn’t really have too many rules anymore. In the 70s it was downstrokes and Marshalls like Sex Pistols and Ramones. But now you can have Fenders, be clean, be electronic, and you don’t have to be in 4/4.

It’s not so much rock ’n’ roll influenced anymore. There’s a lot more dance influence in punk now, and I love the outside influences that punk is getting. In the future, it’s probably going to be more political than in recent years, with Theresa May and Donald Trump. It’s not going to influence our punk [music] but it’s gonna influence other people. Politics and punk have always had that kind of relationship, and that will have a lot more influence on punk again – which is probably a good thing for punk musicians.

Amyl And The Sniffers drops 24 May on Rough Trade Records.