Elena Tonra has developed a reputation for searingly honest songwriting. The former Daughter frontwoman’s first solo album, released under the moniker Ex:Re, takes things to another level and places her guitar playing front and centre… 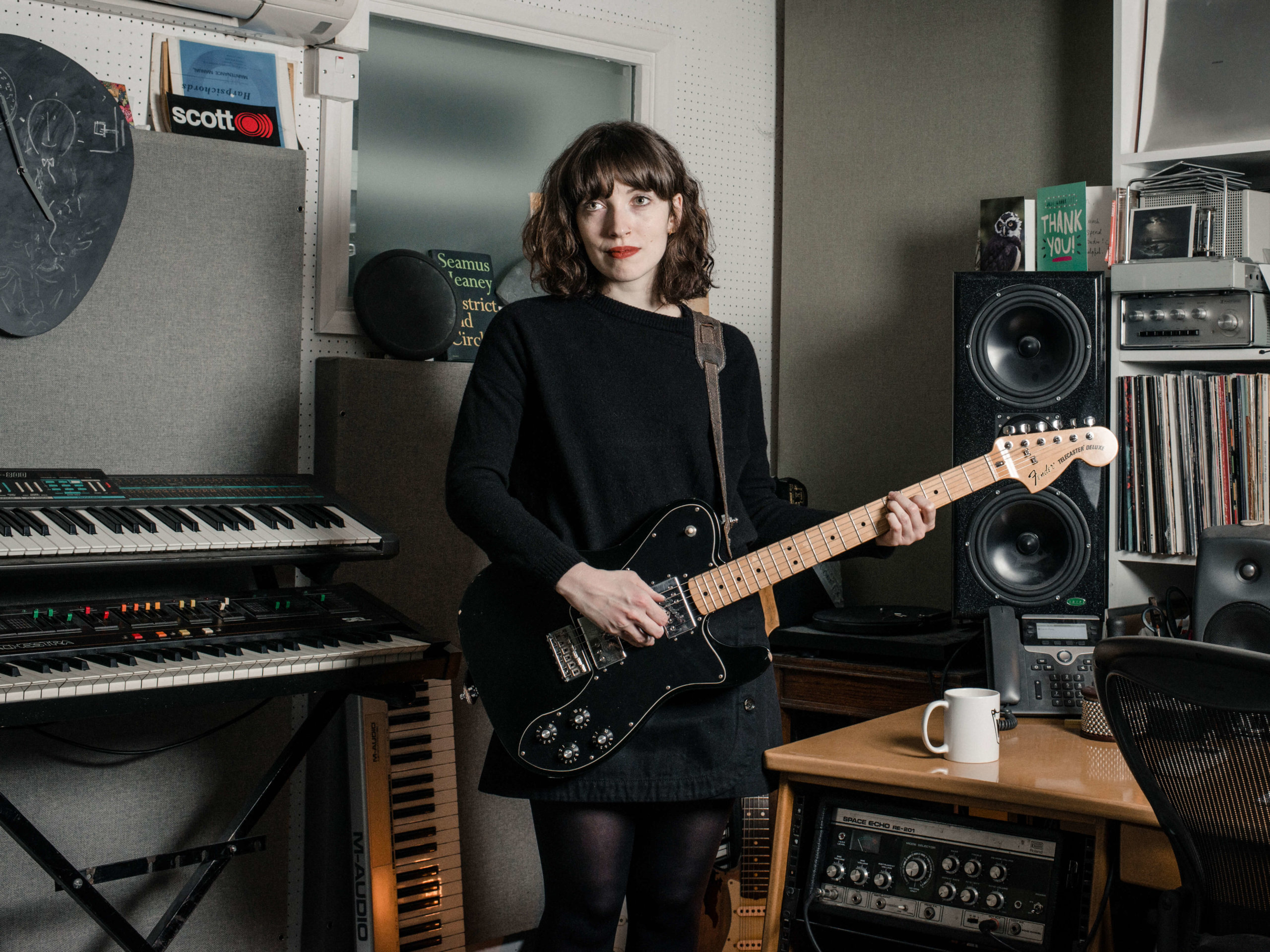 Sometimes, it’s hard to really process the events of our lives until we have the opportunity to hop off life’s treadmill and take stock. That’s what Elena Tonra did with her first solo project, Ex:Re, which was recorded when, after three critically acclaimed albums and four EPs, Daughter went on hiatus in early 2018.

“We decided to have a little break, because we realised that we’d been together and working together for about eight years, so we decided it would be nice – in a friendly way! – to spend some time apart,” the affable 28-year-old explains as we chat with her and producer Fabian Prynn in the intimate London studio where much of the album was recorded.

Most of us might take a nice long holiday under those circumstances, but Elena had an itch to scratch. ‘Ex:Re’ is pronounced ‘X-ray’ but is a play on ‘regarding ex’, and chronicles the aftermath of a breakup she went through just over a year ago.

“It had been probably over the last year and a half I think, compiling little notes and demos,” Elena says. “After Daughter’s last official album, we made a soundtrack, [2017’s Music From Before The Storm] and started renting a space to do that in, but we really liked having our own studio. So after the soundtrack was finished, we kept renting it for a while. It was great because it felt like ‘going to the office’ a bit, in a good way – getting a bit of structure. So that’s when I began to concentrate on addressing these ideas that had come out of break-up writing, really, and I started making demos.”

The resulting album is almost uncomfortably raw at times, but it’s also some of her finest work – an album that eschews much of the electronic influence that’s become part of Daughter’s sound in recent years, instead placing Tonra’s atmospheric, minimalist guitar playing front and centre.

“Well, it’s sort of my job!” she says, laughing. “My main instrument is guitar, so that’s the one that I’ll always gravitate towards when I’m writing. For this record, just because there happened to be a piano in our little writing room, I started writing on piano as well, but most of the time I write on guitar, and that’s how all my parts in Daughter have been.

“It feels like to me that’s where my home is, whereas for Igor [Haefeli, Daughter guitarist], he’s definitely the more wizardy on guitar of the two of us! But I don’t know if he thinks he’s just a guitar player. He’s into the production side of our Daughter records. So I guess it was naturally more guitar-y, because that’s just how I write.”

Given that she’s spent years in a band with another guitar player to share the load with, we wonder if Elena felt any pressure being the sole guitar player in Ex:Re, but she’s forthright in her response.

“I kind of quite liked the idea of that, to just have to do my own thing,” she insists. “Igor and I work together really well and are complementary as guitarists, but I guess – and I sound quite selfish here – in a way, sometimes I was quite conscious that, by listening to our records, sometimes people would assume that I was just singing and writing the lyrics, and that often it’s not necessarily known that they’re my guitar parts. So the ownership thing of being the main guitarist in this was quite nice! That’s not in any way a bad vibe against Igor, but I just liked that I could do my own thing here.

“It’s silly, because I shouldn’t be reading them, but there are things that have been written about Daughter where it’s assumed that a guitar part is Igor’s, and Igor hates that as well. He’s like: ‘Um… I don’t think they’re talking about my bit there!’ [laughs] So there is still the noticeable thing that happens a lot, of: ‘Oh that must be his part.’

“I feel like I know where my abilities lie, and I know what my style is and what I’m doing – I’m definitely not a wizard. I would say I’m definitely more of a writer than I am a ‘lead’ guitarist in that way, but I think there was a slight element of trying to make sure that it was known that, yes, I do play!”

Elena’s route to guitar playing started in her early teens: “I think when I was about 13? It was my brother’s guitar that I used to nick when he wasn’t in the house,” she recalls. Her love of guitar was further fuelled by an early affirmation that, despite the nonsense stereotypes that still persist in some quarters, playing guitar was very much a job for a woman.

“One of my really early CD was a compilation called Girls And Guitars, I think? It was very strangely titled!” she chuckles. “But even though the title was weird, it had Joni Mitchell, Janis Ian, Carly Simon… I used to listen to it all the time. I also used to listen to a lot of other probably more embarrassing CDs, but as a result, I guess I never felt that playing the guitar was a strange thing for a woman to do.”

Weirdly named compilations aside, the other key factor that pushed Elena into guitar playing was that most relatable of teenage issues – being something of an introvert. “I had this mate at school called George, who I still think is probably the best guitarist I’ve seen, playing wise. He taught me how to play, so he’s probably my guitar hero!” she explains. “It started when we were at a house party, and being that we were maybe both a bit socially awkward, we just sat on this bed, and he played guitar and showed me how to play like him.

“It wasn’t like strumming patterns, or chords, or anything like that. It was mainly altered tunings and fingerpicking. So I kind of learned that way first, and then after that it was like, ‘Oh, and there’s this thing called a barre chord!’ And I’m still shit at it, to be honest, so I don’t really attempt that!

“Then I went off for a couple of weeks with what I’d learned, and came back and played George the song I’d written, and he was really encouraging. I think that was the start of me feeling like I could maybe do this thing to an alright degree. I do actually quite enjoy playing with a pick nowadays, but I only ever really use a thumbpick. Even when I’m strumming, because it’s more grippy – there’s less chance of it flying out of your hand [laughs]. It’s like a mitten! There’s less chance of you losing it, because it’s attached to you!”

Something old, something new

When it came to recording Ex:Re, Elena knew that she needed a creative foil to help her achieve what she wanted for the record, and her friend Fabian fulfilled this role. “We just played through the songs together and you said: ‘Would you like to make an album… in a month?’” Fab recalls, chuckling. “Doing something in that period of time is actually quite exciting – you can’t really second-guess yourself, because you don’t have the opportunity to!”

“It was really fun!” Elena adds. “It was a strangely fun way to make a record about a not-very-fun time! Because we didn’t have any time really to undo the things we were doing, we worked quite instinctively and just kept going.”

This instinctive approach is evident on the raw, rhythmically interesting guitar work throughout, which combines a mix of looped demos and happy accidents. “Where The Time Went is probably my favourite to play, just because I didn’t really know that it was in an interesting time signature when I wrote it,” Elena explains. “It felt like a very instinctive guitar part, and the song just fell out from that. I like the way that the guitar acts as not necessarily as a guitar part. So in New York, it’s this loop which is cycling around and around, but it forms the base of it, and it gives the storyline that kind of drunk feel, because it’s not quite in time – it sort of drifts in and out.

“Some of them are accidental, because I use the looper as a tool for writing, it ends up like that’s the only way it can be. So on The Dazzler and New York, when I was demoing them, I had the guitar part on a loop so I could record for half an hour, throw out words at it and try different melodies. But then those just became the parts – because afterwards, it just worked.”

“I think from demo to finished thing, pretty much the whole album stayed the same,” adds Fab about the album’s evolution. “It was all built around the guitar parts and the vocal, really. With the exception of a few overdubs, it was all really formed before we even got into record the final thing.”

When it came to bringing gear into the studio to record the album, Elena leaned primarily on her trusted Telecasters. “When I started playing electric, I pretty much exclusively played Telecasters,” she explains. “Most of my songs on the album are my Telecaster Deluxe, which is a Classic Series ’72. It’s a guitar that I play in Daughter, and it’s usually in drop D–well, double-drop D to be accurate, because both top and bottom strings are tuned down to D. But then I have another guitar that I really gravitated towards when I was writing, which is always in drop C#, so most of the songs on this record are in that.”

The acoustic guitar on the record came courtesy of 4AD A&R man Ed Horrox, who loaned Elena a ’64 Gibson LG-2 apparently used by Elvis in one of his film roles (“Elvis held it!”), while another key sonic addition is a pedal that’s shrouded in mystique…

“There’s a secret pedal!” Elena exclaims. “And I’m going to keep it a secret, because I love it and I’m like, ‘I don’t want everyone to know the tricks!’ Igor bought this pedal about a year ago or so, and we used it on the soundtrack… and I just loved it so much, I was like: ‘I’m going to copy you!’ And, I wouldn’t say he got angry, but he was just a bit like: ‘No! No, it’s my great pedal!’

“But, I did copy him… and it is great, and now I am going to keep the secret of it because it’s wonderful. I don’t even know what you’d call it, it’s like a glitchy, bitcrush-y… is it called a granular delay? All I know is that you turn it on and just does the wildest, sometimes uncontrollable things!”

Surprisingly, given her affinity for Fender guitars and amps, some of the album’s tones came from that none-more-classic rock combo of a Les Paul through an old Marshall JMP amp.

“That was a bit of a surprise! I blew up the Fender Twin in the studio,” Fab says sheepishly. “A lot of people who are Fender-inclined might not try them, but they’re pretty incredible!” Elena agrees, adding: “It was like, ‘Oh well, that amp’s working, so let’s have a go!’ And it sounded really good.”

On an album where following her instincts yielded such impressive results, why would we expect anything else?