Her debut album has made waves, and she’s showing no signs of slowing down. 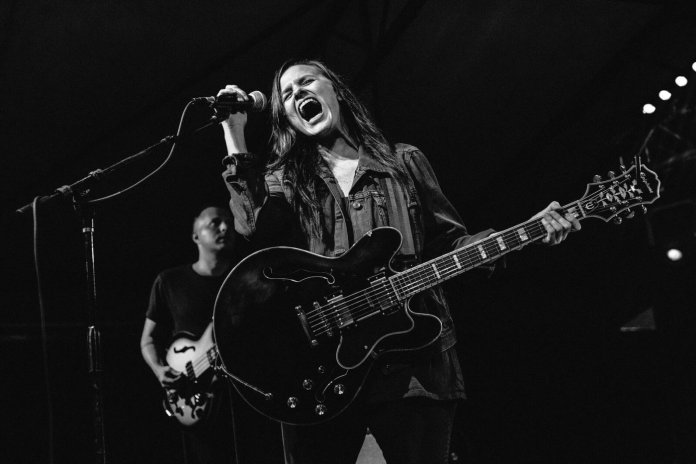 Emily Wolfe, accompanied on stage by only her amp and pedalboard, gives her guitar strings a tentative whack, before launching into her solo set in the Camden Assembly. A lot of guitarists would find performing rock material backed by only a looper pedal nerve-wracking – but you wouldn’t know it from how Wolfe plays.

Her performance oozes an electrifying mix of confidence and vulnerability, bringing her songs, which on the record are backed by a full band, into a new light – but losing none of their sincerity or grit. We saw Wolfe perform one of her two solo sets in support of Dutch musician Jett Rebel. Before coming to Europe, she had just wrapped up a US tour with her band.

Her records demonstrate a brilliant range of guitar skills. From the sultry, stripped-back sound of her EP Roulette, Wolfe leapt to an all-out barrage of riffs on her self-titled debut LP released earlier this year, and produced by Alabama Shakes keys player Ben Tanner. We caught up with her after her London show and were curious as to how she finds being backed by just her own TC Electronic Alter Ego X4 as opposed to a full band.

“I’m not KT Tunstall or Ed Sheeran with looping, but without a band I gotta have some kind of backing stuff. I try to emulate the drums with a reverb pedal, a Strymon Flint. By chugging the strings it’s like the snare, and then if I hit the low E a little bit, I get the kick. So that was what I was trying to do. And if I do a solo I try to hit an EQ pedal, so it’s not the same frequency because I don’t want it to get muddy.”

Something else that stands out about Wolfe’s board is the analogue clock in the corner, stuck next to the power supply. “You know it’s just so important to leave a good impression with people,” she explains, “I think one way to do that is to be on time. I’ll never go over or under my set time, because I’ll look down and be like ‘I got five minutes left can I do one tune’.”

Wolfe is a keen fan of hollowbody guitars. One of her tattoos commemorates the set of TV Jones pickups found in her old Gretsch 2420T. She had to sell the guitar to make rent, hence the commemoration in ink, but she’s still committed to hollow electrics. Running into her board when we saw Wolfe play was a Gibson Memphis ES-335 – she’s recently been quite attached to her Epiphone Sheraton (one of our top picks for electric guitars under $1000), so we were wondering why the change. “I was afraid to bring mine because I’ve seen so many horror stories,” she says with a nervous laugh. Wolfe had flown over to Europe from the US. “Since it was just two shows – not worth the risk. But they let me borrow a Sheraton in Amsterdam and borrow a Memphis 335 here.”

“It’s a huge difference,” Wolfe says, when asked if there’s anything she prefers about either guitar, “the pickups are totally different. I’m pretty sure the Gibson’s pots are exactly 500K, and the ones in the Sheraton are warmer, I think my pots are around 350K. I honestly like duller pickups, because it allows me to get more tone out of my pedals.” Wolfe’s also a keen pedal buff, and approached a broad range of drives when she set out to add grit to her sound. But she eventually settled on a tried and tested classic: “I went through a bunch of different overdrive pedals, and none of them really sounded the way I heard an overdrive in my head until I found the Fulltone OCD.” She’d grabbed one of the limited black OCDs.

A core of Wolfe’s lead sound is an octave-up snarl– which comes from an EarthQuaker Devices Tentacle, running after the OCD. Wolfe’s pedal inspiration come mainly from renting gear from a shop in her hometown, Rock ’n’ Roll Rental: “They’ve got this wall of pedals. Basically, you go in and pay seven bucks a month, and you can rent one, and bring it back whenever you want. So they had that one, and then it did it very well, I haven’t looked back.” The combo gives her impressive leads that Jack White-style scream – but when it comes to soloing, Wolfe says she’s still got some things to improve on. It lies, she says, in learning to hold back from shredding the audience apart: “I’ve been really wanting to figure out perfecting what I choose to play and when I play it. Because I notice I can get really note-y. I would stop myself and be like ‘bitch, you have to do one note right now, because it’s too much, and people are going to be like “stop”.’ I really want to get better at that.”

There’s a distinct flair to Wolfe’s playing that displays a whole host of influences. But like many others, it was Stevie Ray Vaughan that really changed the game for her: “I put on his record Couldn’t Stand The Weather, and I was like ‘how in the world can I do that? I want to do this.’ I think that was it guitar-wise. And then also, in terms of tone, Songs For The Deaf by Queens of the Stone Age.”

Both are imbued with a sense of Americana – whether it’s SRV’s Texas blues or the desert road-trip evoked by Songs For The Deaf. But it’s more than musical tradition that inspires Wolfe’s aggressive playing: she admits that the scene in her hometown of Austin is a little weird. “When doing live stuff with the band, I’ll kind of beat the shit out of my guitar,” she says. “And so, I think frustration with the music scene [in Austin] kind of gets me going.”

“Of course, I’m not knocking the city – you just have to be super weird to get press there. And it’s really strange, I don’t want to be weird, I just want to be myself you know?” But the lively (if weird) scene does spur Wolfe on, she says. “There’s so much music around that I will go see a show, and then be inspired to play better than the band I saw. I will go home and try and think of a cooler riff. That’s so competitive of me, but I mean that’s the truth.”

Whether driven by competitiveness or not, Wolfe’s plans for 2020 are to keep touring, and get some more material on record. She has songs written, which has built up over her career. She says of her writing process, “It comes in microscopic pieces at a time… Sometimes it will take me a really long time to write one song. First I’ll think of a word, I’ve got a book of just really cool words that I think are really inspiring, or phrases. And I will try and write a song around that. But most of the time it comes, music first, either drum beat first or riff first. Sometimes if I write on bass first, it’s easier because I can hear that there are so many different directions to go with four strings instead of six. It’s kind of all over the place.”

But if Wolfe’s current trajectory is anything but all over the place. She’s definitely one to watch.

Emily Wolfe’s self-titled album is out now. Find out more at emilywolfemusic.com.