We talk to the Fender CEO about how Fender Songs can break down genre barriers in guitar learning, and plenty more besides.

22 October 2019 saw Fender announce the release of Fender Songs. Launching initially on Apple Music for iPhone and iPod touch, but set to expand to other platforms such as Spotify in the future, Songs is a subscription-based learning app that features the guitar, piano and ukulele chords to over 750,000 popular songs.

Fender Songs allows users to play along with original recordings or a backing tracks as they learn, slow the playback speed down while retaining pitch, and even record their efforts. The app is available in the USA initially with a UK roll-out slated for early 2020. Users can sign up for $4.99 per month or a get a 12-month subscription for $41.99.

We sat down with Fender CEO Andy Mooney at last week’s press launch in New York to find out more about Fender Songs and how it ties in with the company’s digital strategy.

It feels like Songs is a learning solution that could only exist once technology and people’s listening habits were sufficiently evolved. Do you think that’s the case?

“Yes – I’m not the technician in this group, but the streaming platforms had to advance far enough where we could tap into their API, to take the algorithm that we’d developed and to be able to auto-generate the chords.

“But I think the other thing is, just the scale of people listening to recorded music. 255 million people subscribing to a streaming music service in 2018. Goldman Sachs predicts that to go to 700 million in three years and over a billion by the year 2030.

“The great thing for our industry is that you’ve got demand for recorded music at an all-time high and still growing in leaps and bounds. And a lot of the current growth – because the early adopters were much younger – a lot of the current growth is coming from people listening to back catalogue, which is a higher percentage of guitar-based music. 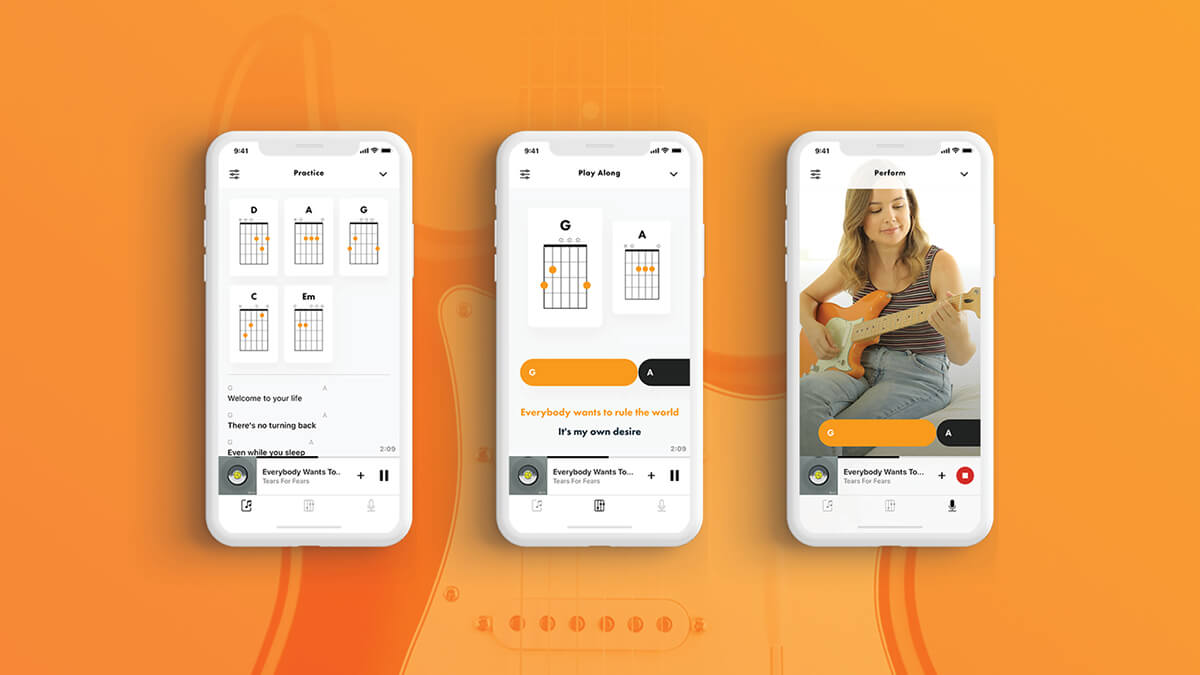 “Simultaneously you’ve got demand for live music – particularly festival experiences – at an all-time high and growing. Live Nation, who are just down the street from us in LA, the biggest concert promoter in the world – 93 million people went to one of their events last year. That was up from 83 million the prior year. So you’ve got these two external forces driving organic growth in the industry the like of which we’ve never seen before.

“The part that we play in this to help further growth is – in the case of Fender Play it’s for first-time players, to help them through the first year and get them to commit to the instrument for life. Someone who commits to the instrument for life has a lifetime value of $10,000. They buy five to seven guitars over their lifetime, multiple amps, multiple accessories. They drive the hardware side of the business.

“Fender Songs is for people who know how to play guitar, to increase their engagement level by giving them immediate access to the chords for songs that they want to listen to on their streaming music service.”

One of the aspects that’s most appealing is the Apple Music integration, which means you don’t need to juggle various sources of information or various devices to play along as you listen.

“When I think back to when I was learning guitar, back in the days of vinyl, y’know? You were going back and forth, stylus up, stylus down – you were wearing out your needle before you mastered your first song. Plus if you really wanted to get it right, you had to buy the sheet music.

“In the case of Songs, day one, $42 a year, and you get access to the chords to 750,000 songs. On day one. And that number will absolutely grow over time. I remember the first piece of sheet music I got was for a Creedence Clearwater Revival song. You were paying five bucks for one piece of sheet music.”

Presumably it’s also lucrative for the artist from a publishing perspective, as anyone learning a song will stream it multiple times?

“We hope so. The data that we have – and one of the great benefits of Fender Songs – is that the listener will stream the song 20 times more often. So we’ll get great data that we can share with the labels and the artists.

“A lot of times, what we found on the beta testing was that people wanted to know the chords for songs that didn’t even have guitars. But every song has a chord structure. If you want to play along with a song from Chance The Rapper that doesn’t have guitar in it, you can.” 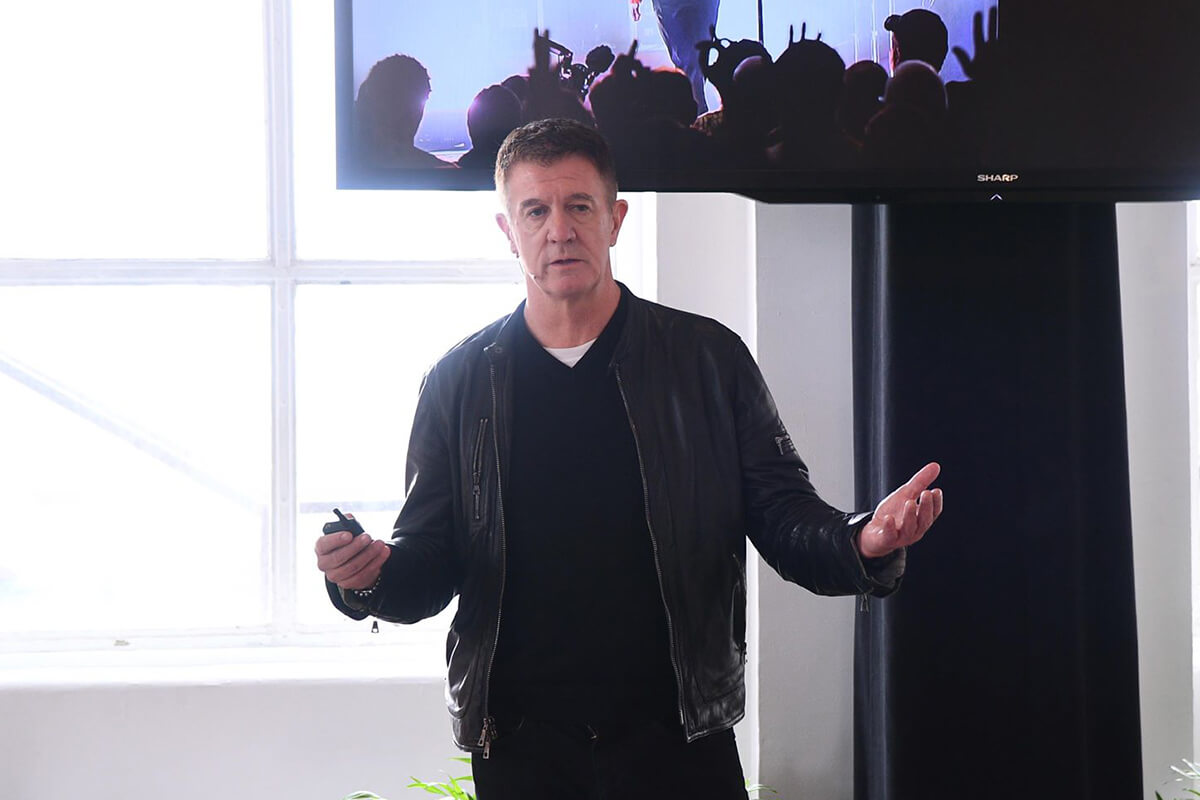 Given the pluralistic nature of modern music consumption, these days it seems just as likely that someone with a guitar might want to learn a Chance The Rapper song as they would something by a more traditional guitar band…

“I totally agree. I have a focus group of one at home, as I have a 12-year-old daughter. Last year it was Twenty One Pilots, this year she has discovered The Beatles. I absolutely can’t tell you how or why, but now she tunes into The Beatles’ channel on Sirius, and she’s listening to The Beatles all day long. She knows the lyrics deeper than I do.

“When I took the beta of Fender Songs home, in her playlist the second song that came up was a Billie Eilish song, her current hit. She immediately said, ‘Do you have the ukulele chords for that?’ I said, ‘Yes we do.’ Within five minutes, she’d learned how to play along with the Billie Eilish song on ukulele.”

In which case it’s immediately breaking down walls between genres, because you no longer have to rely on a community of guitarists – who will naturally be biased towards guitar-based music – to generate the chords.

“You are absolutely right. One of the strangest descriptors I’ve found these days is ‘alternative music.’ I keep saying, ‘Alternative to what?’ The range of genres… in fact, it was so funny, going back to my daughter. She had to do a little essay at school and the question was, let the class know something about you that would surprise people. So she revealed that she loved The Beatles. And one of the things she had in her essay was, ‘The Beatles wouldn’t fit into one of Apple Music’s genres’. I’m going, wow, that’s a pretty astute observation!

“But I have been playing guitar for 50 years and I have a list of every song I’ve ever learned. But it’s only 120 songs. And the fact that on day one on Fender Songs you can access 750,000 songs on day one – it’s staggering to think how easy it’s going to be. People will still use YouTube and they’ll use Ultimate Guitar and they’ll use Songsterr, but sometimes to actually get a song right you’ve got to try to triangulate everything.

“On Songs, the algorithm originates the chords, but we have a crew of people who will also be listening to feedback from fans and they will be modifying the chords that we find where the auto-generation is a little bit off.”

Sometimes it’s just working out one tricky chord that passes you by! And that one piece of the puzzle can sometimes represent a significant breakthrough when learning…

“It’s like when you know Keith Richards was playing in open-G, all of a sudden the whole Stones catalogue opens up!” 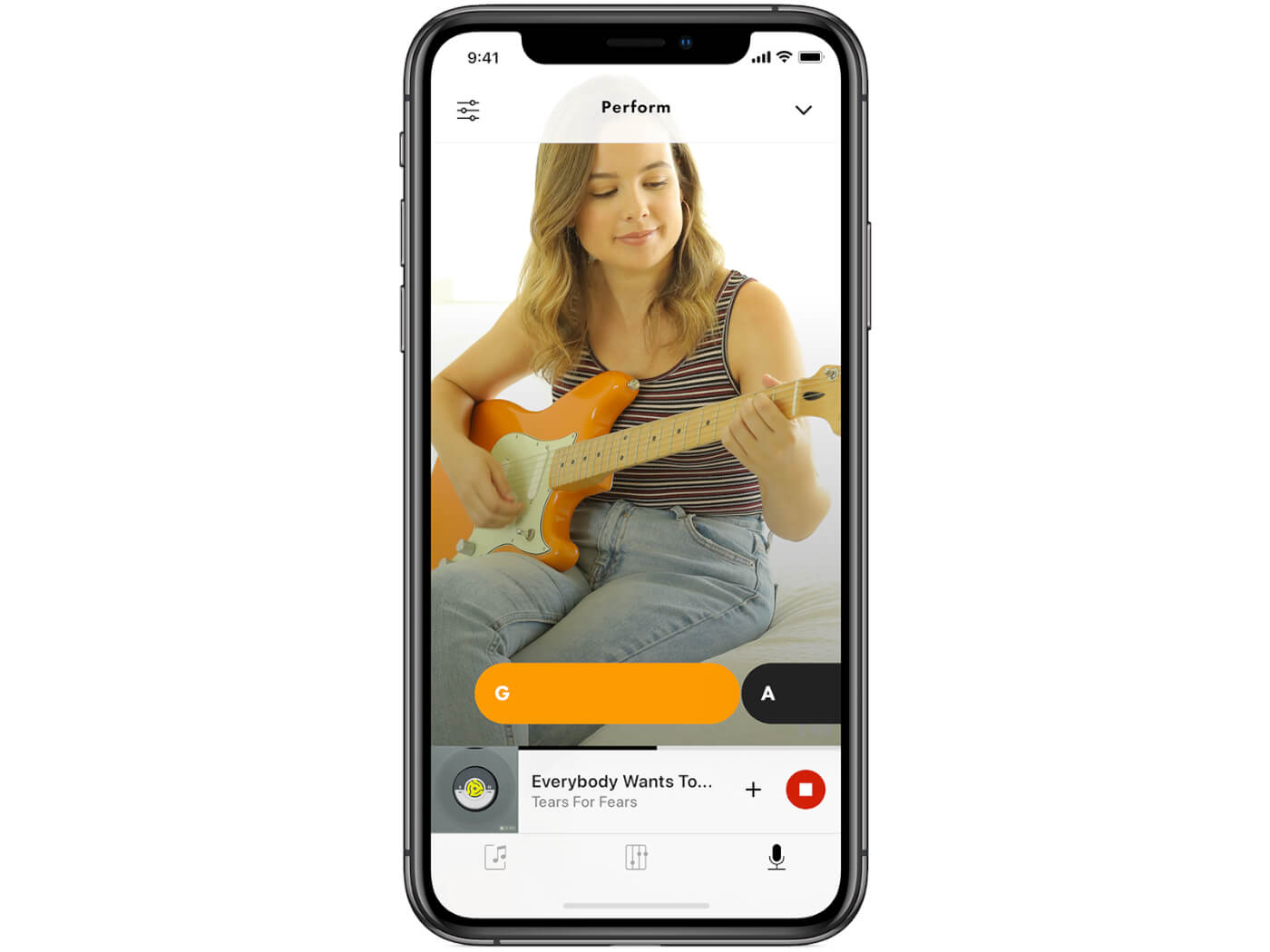 And presumably the more the user base increases and the more behavioural information you have, the more this will inform such things as lesson choices on Fender Play and also create product-marketing opportunities?

“Totally. One of the great things that we learned with Play and hopefully it’ll be the same with Songs… actually, let’s go all the way back to Fender Tune. 50 per cent of the people who downloaded Tune opted in for push notifications. Usually the percentage for any app that opt in for push notifications, the highest percentage is in video gaming, and it’s usually 10-15 per cent maximum.

“The fact that 50 per cent opted in tells me that group wants to be communicated with. They want to hear about new product launches. But I think the other thing we can do, now that we have Play and Songs working in parallel with our marketing money, which is significantly higher than it was four or five years ago – we’ve gone from spending four or five percent of revenues to eight to nine per cent now – if an artist is emerging we can engage with them on Fender Play, if they have a new album release we can feature the songs in Fender Songs, in Fender Play.

“So there’ll be incremental revenue potential. A lot of the products you’ll find out there on the web are either not accurate or not legal. So we made absolutely sure that the artist is gonna get their fair due through labels and publishers, for any revenue that we earn through either of those two products. We license through the labels and the through the publishers depending on the product and it’s a rev-share with each of them.”

“That’s why we’re launching to begin with in the US. It essentially took us two years to really negotiate all the deals to launch the product in the US. The UK will be up next, that’s the next most important market for us to move into. But that’s another process we’re going to have to go through with the international arms of those labels.”

Does that mean, aside from the guitars themselves, Songs is Fender’s primary focus for 2020?

“Yes is the short answer to that. This is our second digital subscription service. Play has been out for just over two years and what we found with Play – and it’ll be interesting to see if in Songs it’s different – is that it’s a highly seasonal product. 25 December is the biggest sign-up date of the year, and interest really sustains at a high level right through to about 1 February. It starts to wane then it starts to pick back up when people go back to school.

“We’re sitting as of this morning with about 110,000 paying subscribers – we want to build that up over time to 1,000,000 subscribers. Fender Songs… that’s a bigger universe of people who know how to play guitar. We believe it’ll be much less seasonal. And we can partner with artists, either at the launch of brand-new albums or re-release, remastering, anniversaries. There’s so many different ways that I think we can market that’s beneficial to the artist and to the industry.”