“I don’t care who plays it; I just love the sound of the instrument” George Benson on his love for guitar

George Benson’s new live album captures an evocative performance from the jazz legend. We caught up with the 77-year-old one-time child prodigy about intimate gigs, signature guitars and the secrets behind improvisation.

When George Benson breezed into London in 2019, there was no social distancing, no two-metre rules and no face-mask mandates. Instead, an expectant 250-capacity audience were ushered in to the illustrious Ronnie Scott’s Jazz Club to witness the Grammy-winning master of jazz at close quarters. And there was a full bar.

It may seem like a lifetime ago, but the intimate evening of soul grooves and improvised jazz leads captured on Benson’s latest live album Weekend In London are as fresh and delightfully zesty as the day they were captured in front of those fortunate few. With the oozing atmosphere of the famed lounge bar providing a sumptuous backdrop, Benson’s creamy vocals and chromatic runs lingered in the air as if they were being slowly consumed by the venue itself, adding a further layer to the legend.

According to the man himself, the decadent surroundings played a key role in the evocative 14-track recording. “Well, one thing’s for sure; you can’t get away with nothing. It is up close and personal,” Benson says earnestly. “Ronnie Scott’s is a unique place for musicians. It showcases them in a way that very few nightclubs do. It feels like you’re on a big stage, but you’re not; you’re on a small stage. And people can feel you, hear you and take part in the performance by reacting to what you’re doing. So, I thought it would be a great place to make a record.”

Not surprisingly, this wasn’t Benson’s first outing at the club. After all, the Pittsburgh native’s storied career began at the age of just seven years old, playing ukulele at the local corner store for a few dollars a time – in the 70 years since you’d probably have an easier job the storied venues he hasn’t played than the ones he has.

But despite this, Benson’s memories of his visit to the iconic jazz club in the 1970s are not exclusively positive. “I played there many years ago,” he explains. “I brought a quartet over which featured a young guitar player Earl Klugh. He was about 17 or 18 years old time. I had a drummer and a bass player, and we played there for about a week, maybe two. I didn’t make a dime because I spent all my money on the airplane getting the band and my equipment over.”

Putting the financial shortcomings to one side, Benson says his stint at Ronnie Scott’s was far from a wash-out. “It turned out to be very entertaining because I got a chance to see London like I had never seen it before, and I found I had an audience that I didn’t know I had. On top of it all, just about every night, John Williams, who was the number one classical guitarist in the world at that time, came to see me play as did the upcoming John McLaughlin. He and I were almost like rivals. We loved each other’s playing, you know, but we were on different pages. It was an exciting time in both of our careers. So, when I hear the name Ronnie Scott’s, it brings that all back to me.” 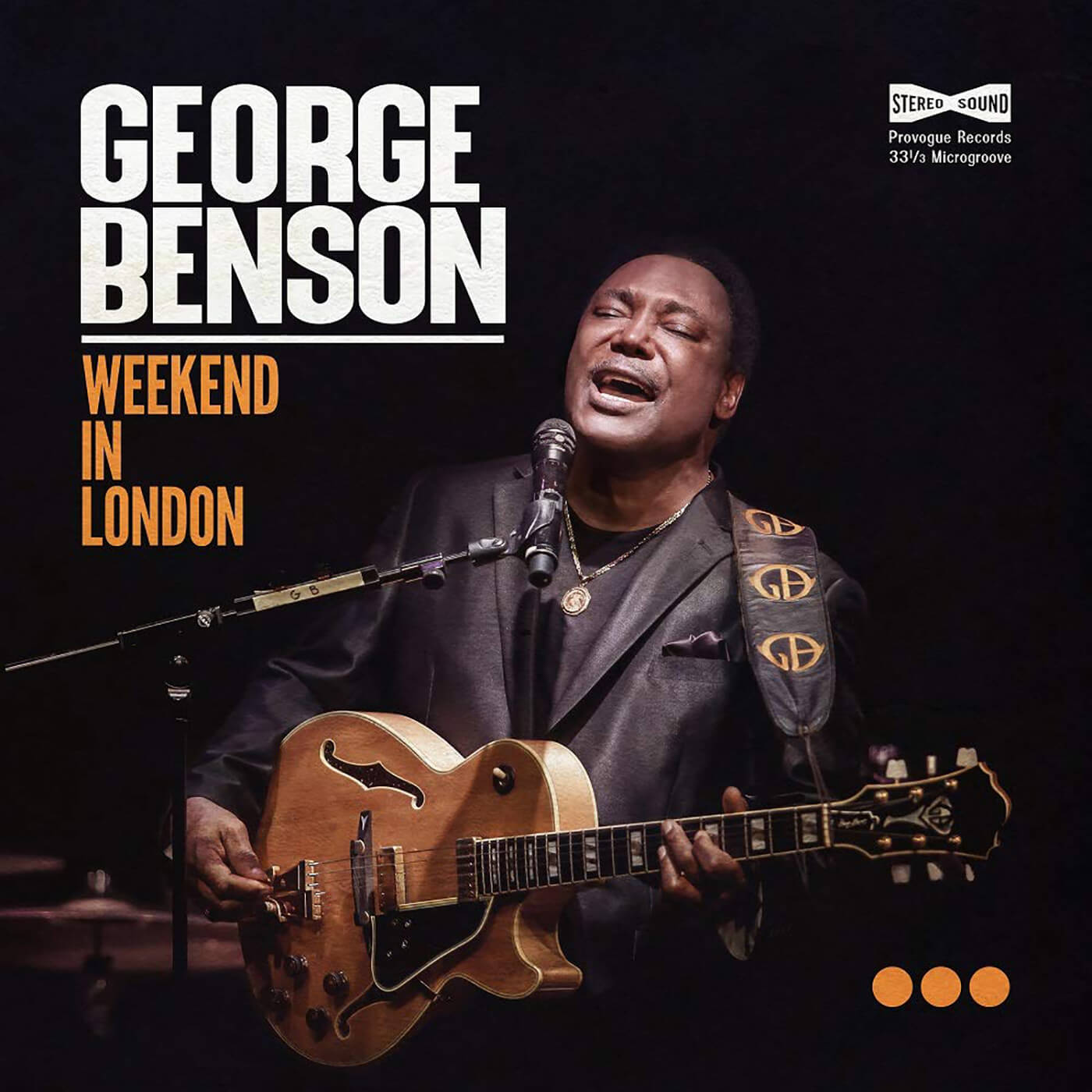 In fact, Benson is as much a patron of the club as he is a headliner. “You know, I’ve played London quite a bit over the last 25 years or so. It’s a place I look forward to because it’s almost like a second home to me. I enjoy the wonderful restaurants and nice pubs during the day. But at night, I think of Ronnie Scott’s Jazz Club; the number one European jazz club. After I’d finished my concerts, which might have been at Wembley Arena or the Royal Albert Hall, I would go to Ronnie Scott’s and I’d hear some incredible entertainment. My favourite was Buddy Rich because he would play drums like nobody you’d ever heard. It was so musical and so entertaining.”

More often associated with the grandiose surroundings of the capital’s concert halls, Benson’s decision to record a live show in the confines of an intimate jazz club provides a telling insight into the environment that forged his formidable career. The club, with all its limitations, provided a conduit to the past.

“It put us so very close together,” he says. “It reminded us of our old rehearsals when we used to rehearse in little tiny places where we were all on top of one another. But that was good, because we were able to check out exactly what each other was doing, and not guess at it. And that wasn’t just for effect. It was really about musicianship. I insist that my band be musical. That’s the first thing I want to hear from them, and then we go from there.”

Aged 10, Benson was already making records. A decade later, he cut his teeth playing alongside the likes of Brother Jack McDuff and Jimmy Smith with his first solo record in 1964 being modestly titled The New Boss Guitar. By the 1970s, he added vocals to his slick chops resulting in a string of hits including This Masquerade, The Greatest Love Of All and Give Me The Night. Mainstream success catapulted his career into a rarefied state, but jazz would always be where his heart lay and, in particular, with the guitar.

“I love hearing the sound of the guitar. That’s my number one reason for playing it,” he says. “And I don’t care who plays it; I just love the sound of the instrument. I practice virtually every day. It takes me back to the days of Charlie Christian with the Benny Goodman sextet. That’s what woke me up, and I’m still trying to produce that calibre of musicianship. The difference is that I do my own vocals now. Vocals are important. Some of audience don’t care that much about instrumentals, but they love vocals.”

He balances his on-stage duties with an unnerving professionalism that denotes a career honed over decades. Calmly delivering his vocals with a smile, he cradles his full-body signature Ibanez; the LGB300, which follows a line of successful signatures that stretch back to 1978 and the live release Weekend in LA, noted for the infectious groove of On Broadway. 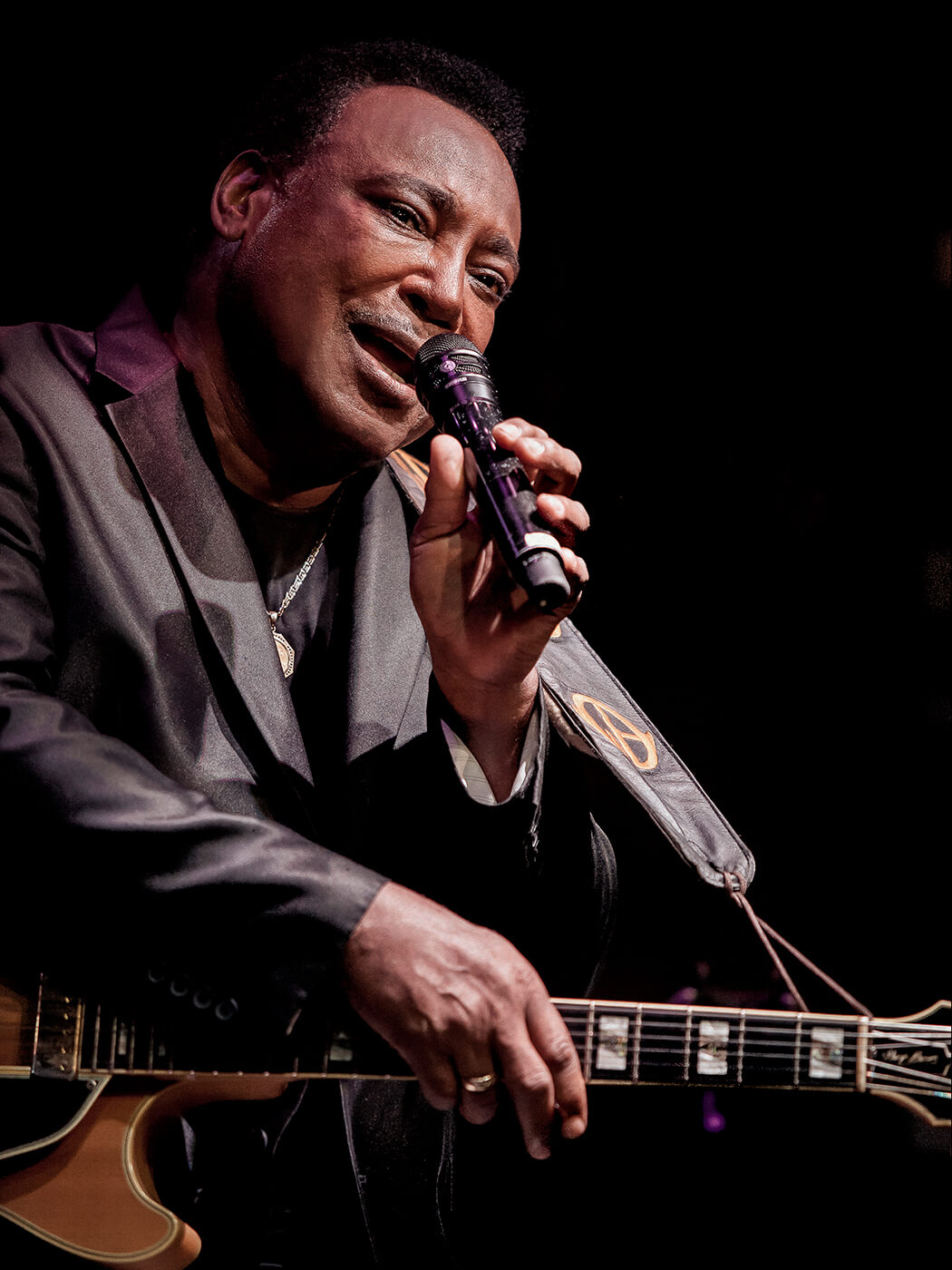 “I was using an Ibanez copy of the L-5, and man that was a great guitar. That’s what attracted me to the company,” he says. “Ibanez came to see me the night we did that album. They came backstage and said they’d do anything to have me with their company. I had first played one of their guitars in a store after one of my friends, Phil Upchurch; a great guitarist and bassist, told me about them. When I picked one up, I was really impressed with how the guitar was put together.”

Benson agreed to partner with Ibanez on the understanding they would create a new design. “They asked me if I had any ideas, and I said ‘Yep, I certainly do’, and that’s how we ended up with GB20, which was the first guitar, and the GB10 which is the most popular.”

As a touring musician, Benson was particularly interested in creating an instrument that would withstand the rigours of the tour bus while being discrete enough to store in an overhead locker. The solution was to profoundly scale down the Ibanez body while retaining the scale length. “They told me if I changed the size of the guitar it would change the sound; and the sound would get smaller,” says Benson. “They said they could correct some of that with the design of the pickups, but inherently, you’re gonna lose some low end.” 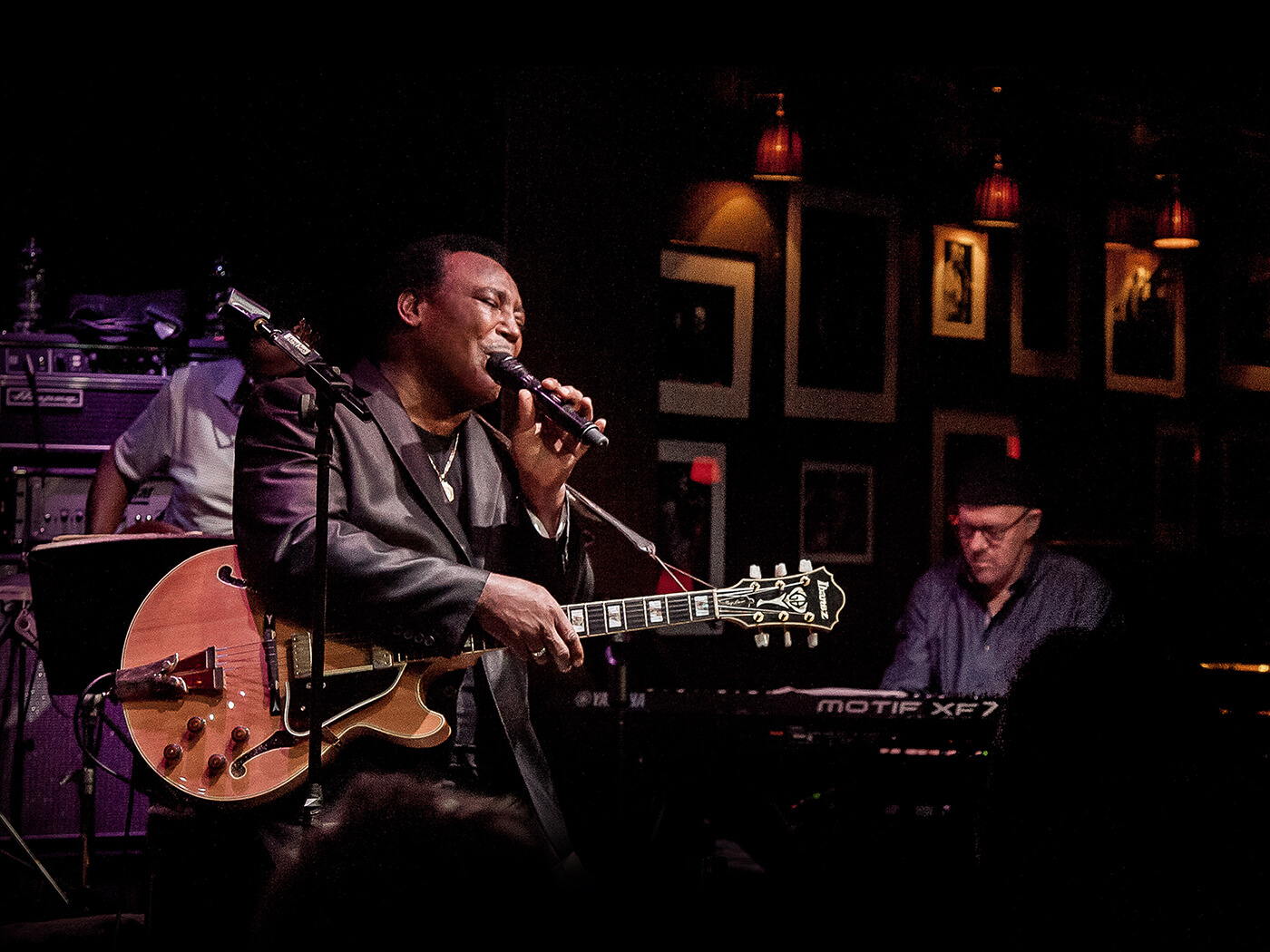 With the full-size big brother GB20 already in the bag, Benson was eager to improvise. “I wanted to experiment with the GB10,” he says. “I was so proud to have something with my name on it, but I was also happy to be an innovator with the company.”

The GB10 has been Ibanez’s longest running artist signature model. More fundamentally, the partnership addressed some key reliability issues that had frustrated Benson over the years. “The thing I wanted most, they covered,” says Benson, who often toured 40 weeks a year. “I had to go to a music store every week to have my guitar tweaked because something would go down with it – either the pickups would start rattling or the frets would go out of line or the nut needed honed or the tuning pegs would loosen up, but not on the GB20 or the GB10. You could drop them on the floor, pick them up and play them. Sometimes you wouldn’t even have to retune them. That was a boom for me on the road because I was playing a lot.”

He was also collaborating. By the 1970s, Benson had already hooked up the likes of Lonnie Smith, Miles Davis and Stevie Wonder. His later credits would include a range of musical partnerships ranging from the 2005 The Great American Songbook, Volume IV with Rod Stewart to the Gorillaz’s 2018 Humility single. His approach throughout has been epitomised by an unreserved willingness to share and create. 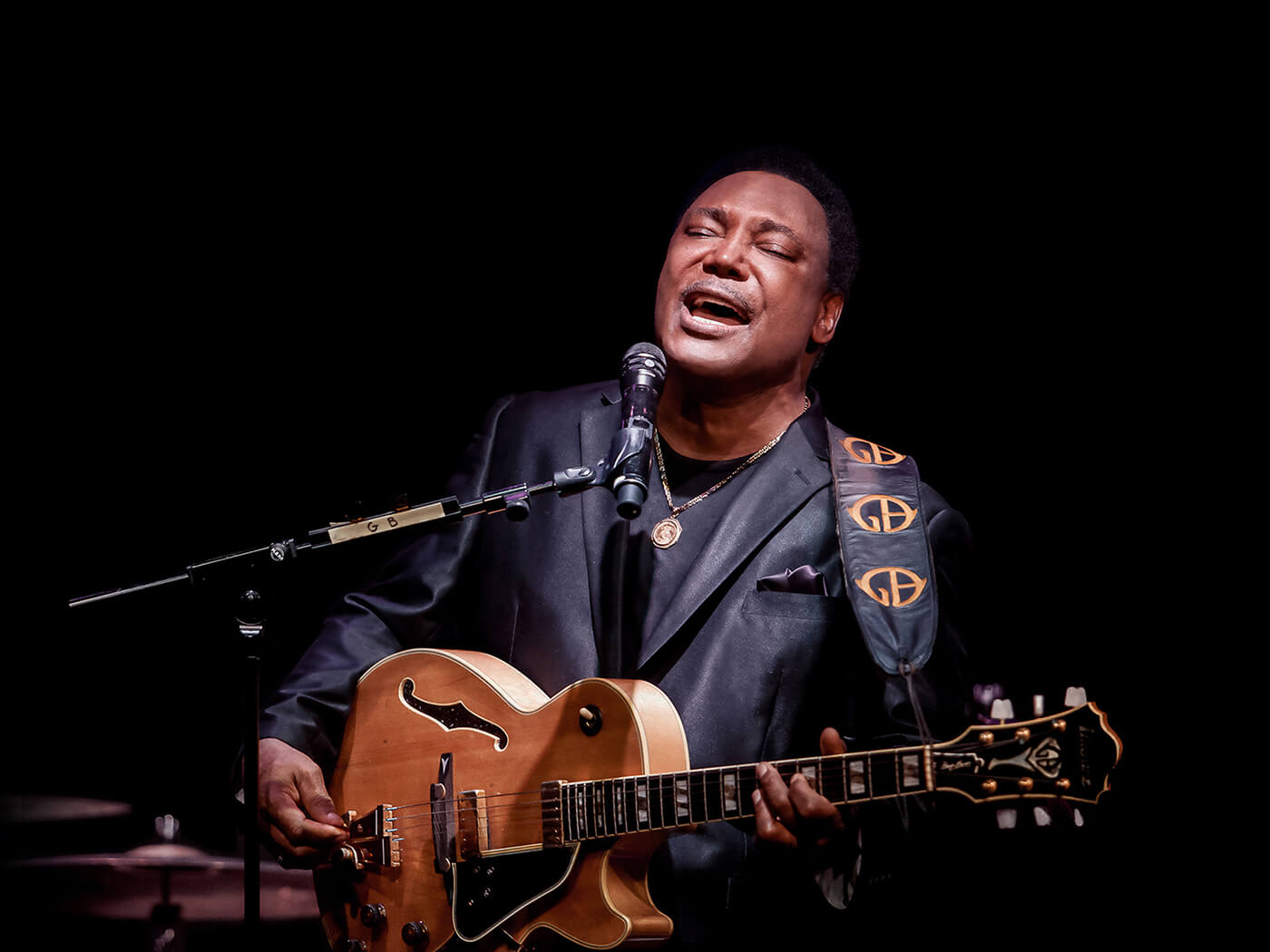 Benson’s latest offering provides a succinct review of his career delivered from the liberating confines of a jazz club. It’s an environment that transports him to a time before chart success and top billing on a royal stage. All the hits are there, but the performance is far from retrospective. Rather it is compelling and rests on Benson’s remarkable ability to improvise.

“Basically, the whole show is improvised except the melody itself and the ensemble playing,” he says. “We play the arrangements to remind the audience what song they’re listening to, but then we go crazy.”

It’s infectious stuff that many players find daunting. For them, he has some sage words. “One thing that happens to most of us is we end up running into a brick wall,” he says smiling. “We think we’ve got it covered. We’ve practiced everything in our minds, and yet we know we haven’t reached it yet. That happens to all musicians, no matter what they play and where they’re from, but especially to guitar players. There are two things that are difficult on the guitar – improvisation and technique. So often you get busy doing one and you forget about the other – then you got a problem. My advice is to listen to other players and see if there’s something they’re doing that you’re not. Find out what it is, and the next thing you know; that bridge has been crossed and you’re on to the next wall.”

Weekend in London is out on Provogue Records/Mascot Label Group.