The pair discuss their love of guitars, and why they’ve formed a band. 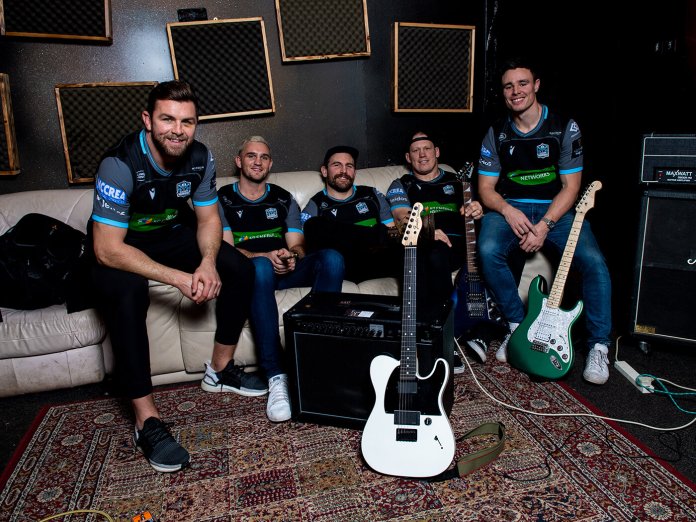 It’s probably safe to say that the stage of the Glasgow Hard Rock Cafe hasn’t often been the graced by elite athletes, but that’s all going to change on 15 February 2020, when rugby stars Petrus du Plessis, Callum Gibbins, Lee Jones, Ryan Wilson and Adam Ashe take to the stage for a one-off charity gig.

All five are members of 2019 Guinness Pro14 runners-up Glasgow Warriors, and have bonded over their shared love of playing music. Then, earlier this year, the decision was made for the players to get together and form a band, with du Plessis, Jones and Wilson sharing the guitar duties.

“We started the band with the idea in mind to do something for charity,” says Petrus, who won two Premiership titles at Saracens and is now player-coach at the Warriors. “With the Glasgow Children’s Hospital Charity as our official charity partner, it was a no-brainer to put this show on to raise money for them. We’ll also be doing some further fundraising on the night with some great prizes on offer.”

With the players busily rehearsing for their ruck ’n’ roll debut, we spoke to Petrus and Scotland international winger Jones about swapping tackle bags for gigbags…

Petrus: “I don’t want to go into too much detail, but… I might have been a bit naughty at school! When I was 16, I was sent home for a week and my parents said, ‘Right, you’re not leaving the house!’ And we had a guitar in the house, so I just sat in my room for that week and started to learn some chords. There were a couple of guys in my school who were already playing, and it became a bit of a challenge between us seeing who could play the biggest metal riffs and all that stuff.

“About six months to a year later I was at a level where you could actually recognise the songs I was playing, and then from then I just started buying different guitars and learning different styles of music. Obviously, it’s been very on and off since then, being a professional rugby player, but there’s nothing better than spending a bit of time playing the guitar!”

Lee: “I was in high school, probably about 15 or 16, I started playing a bit of guitar at school and then got a guitar at home, and kinda went from there! It’s funny looking back, because nowadays everything is done online – if you want to learn a song you go to YouTube and whatnot. The other day, one of the younger boys here was asking, ‘How did you learn songs and all that when you first picked up the guitar – was it YouTube?’ I was like, ‘Nah mate, we just had the internet – I was buying tab books!’.

“Me and a few mates would hang out in one of their dad’s basements and play music together a couple of nights a week. But then, like Petrus, rugby has meant that I’ve been on and off with it since then.”

Petrus: “I don’t really want to part with any of my guitars! But if I had to choose just one, I really love my Jackson Randy Rhoads. I love a guitar with a really skinny neck, and that’s just become my absolute go-to. I always like that it looks a bit different, and it’s so much easier to get all the way up the neck, which is really important for me.”

Lee: “I’ve actually built myself a guitar, just recently. It’s a Strat-shaped thing with a humbucker in the bridge. I didn’t even know you could just build a guitar yourself until one of the boys in the band, Callum Gibbins, mentioned that he’d built a couple. So I went online and had a look at it and the next thing I knew I was ordering parts! So over the course of three months, I got all the parts, built it, painted it, wired it… and it actually sounds alright!”

Petrus: “Well I’ve been thinking about getting a Gibson SG for a while now, and so I went to Guitar Guitar here in Glasgow, and I played a load of them – from the most expensive one they had in the shop, which was about £7,500, to the most affordable.

“It’s each to his own I suppose, but of all the ones I tried, none of them sounded or played quite as good as this one that was about 1,500 quid – I even tried an ESP one, but the neck was too wide for me – but for some reason, I didn’t get it! In terms of ones that got away, I sold my Telecaster… but I sold it to one of my teammates here, so I like to think that I’m just passing the guitar gene on!” 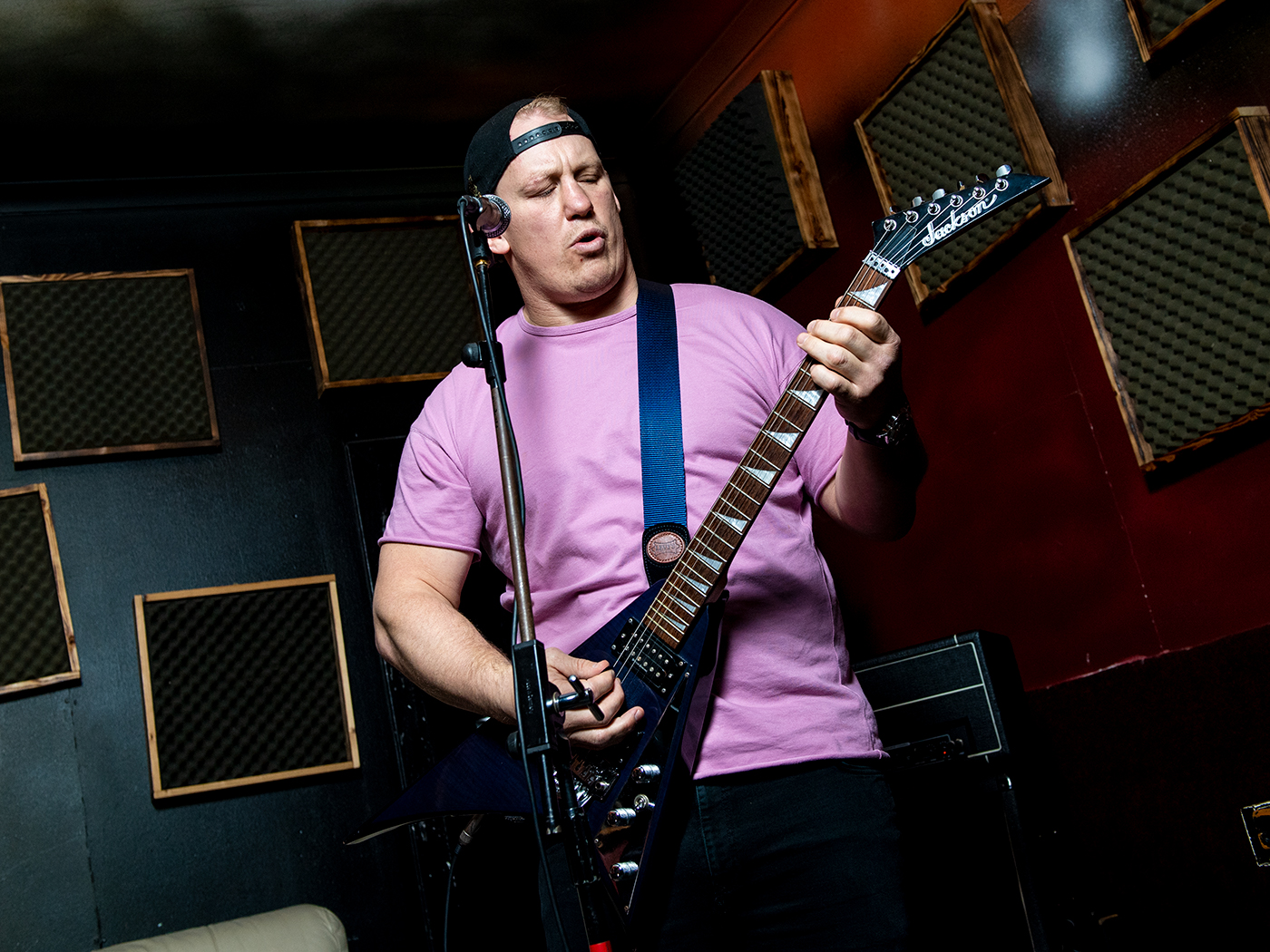 My signature guitar would be

Petrus: “Oh, I would have a body that was literally like four points going in every direction! I just want as many different right-angles in the guitar as possible… pointy bits everywhere. Lee is sitting here next to me shaking his head because he’s more of the ‘traditionally beautiful’ Gibson and Fender shape… I’m just crazy, so I’d go for something that is just totally out there and has as many sharp angles as it can!”

Lee: “Yeah when I built my guitar I went with the Strat shape just because it seemed to be the easiest option, but I think my tastes are a bit more conventional than Petrus! I’d probably go for one of the classic Fender shapes – maybe a Jazzmaster or something offset, get a couple of single coils in there and that’d be me!” 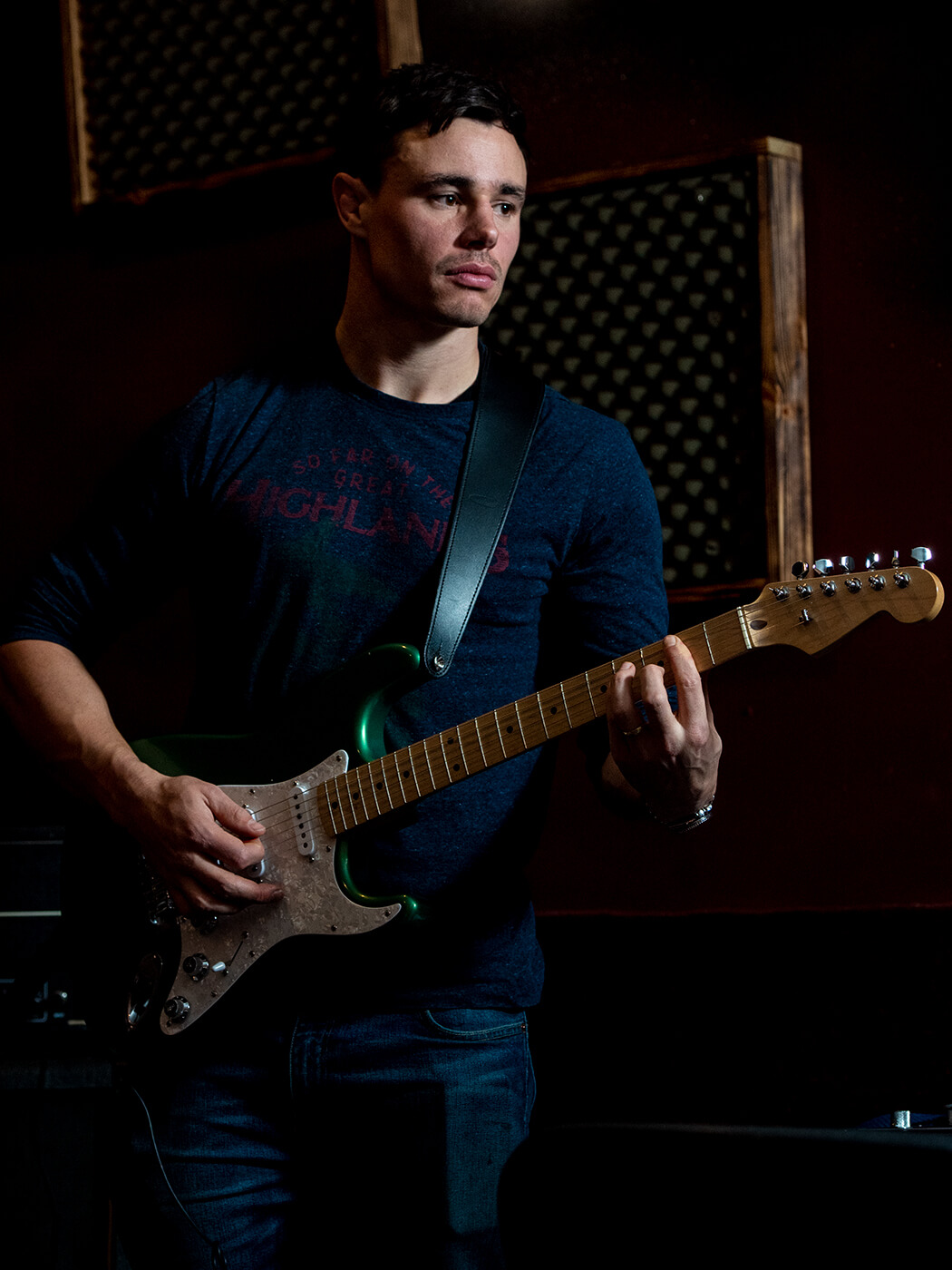 Petrus: “If I warm up, I’ll warm up with Master Of Puppets or Fade To Black – there’s a nice blend of the intricacies of the picking parts and then the fast strumming, so it’s great to get the fingers moving! In terms of this charity gig that myself and some of the Glasgow players are doing in February though, we’re probably not going to go too mad – we’re going to focus on the crowd-pleasers! We don’t want to be up there and people don’t know what we’re playing… we want them to sing along!”

Lee: “I always end up going back to the things that are just ingrained in me, y’know? Usually, it’s a bit of Red Hot Chili Peppers – I always go back to that.”

Lee: “Probably Petrus telling me to turn my amp up! That’s probably the best thing I’ve ever been told!” 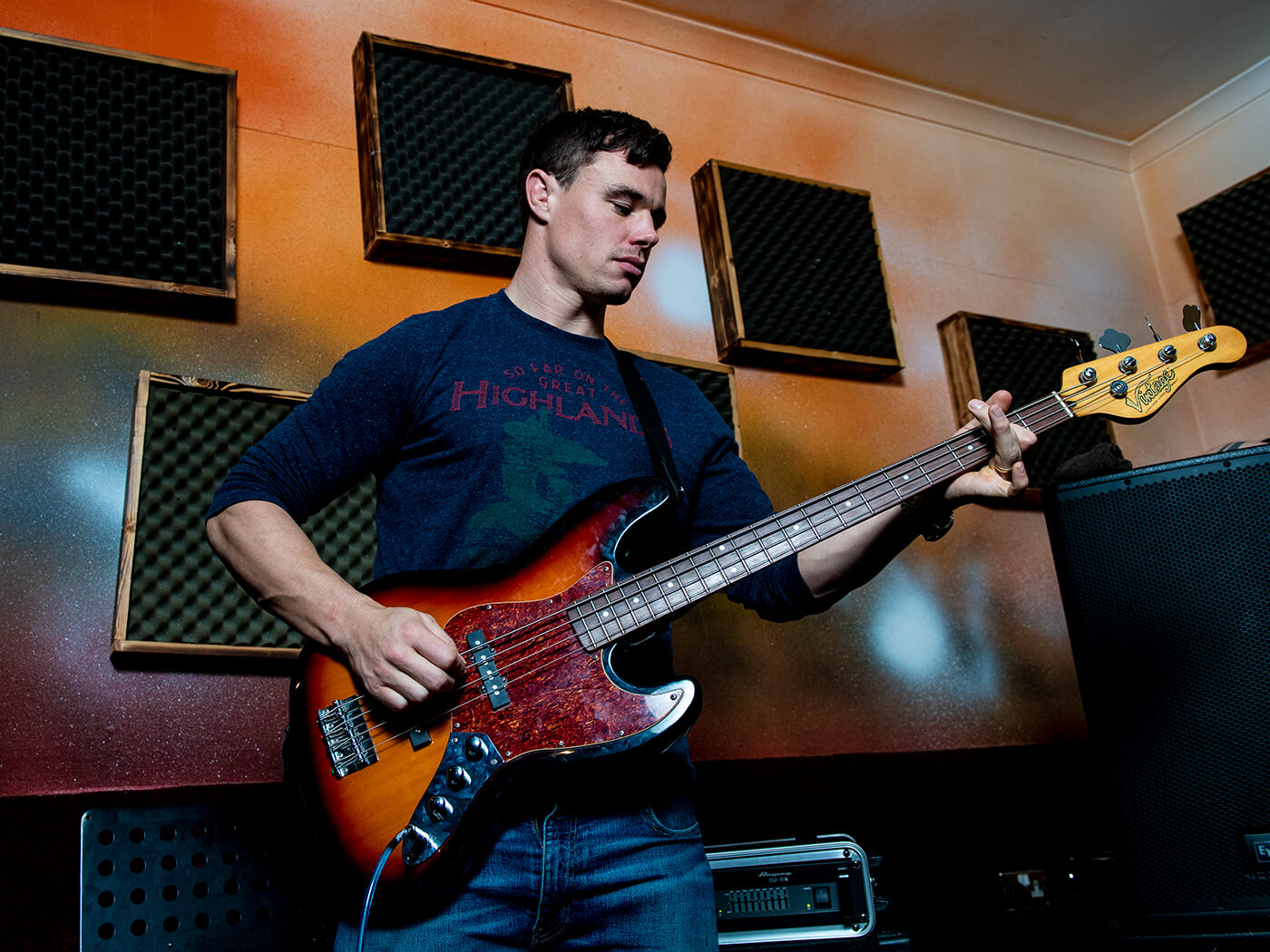 Petrus: “Ask me that again after 15 February when we play this gig, mate! But no word of a lie, if I am even slightly tipsy I cannot play the guitar to save my life – I just get a brain block! I’m sitting there thinking, ‘How do you play that Oasis song again…?’ I get a lot of those moments actually, where you pick up a guitar and someone’s like, ‘Oh play us a song’ and I just can’t think of anything! Lee actually seems to find it a lot easier and the songs just fall out of his fingers, but it takes me about 20 minutes to get into it!”

Lee: “Yeah that’s the thing, this gig is going to be my first one, so we’ll see! With the Warriors, after away games, we’ll grab an acoustic and a few of the boys will play together, but that’s probably the closest I’ve got to playing in front of people! That is a bit of pressure mind, when you’ve got 30 rugby lads sitting there judging you… but nothing’s gone too wrong so far. Fingers crossed for the 15th!”

Petrus: “Well, first you’d have to make it so I was good enough to be in the band, because at the moment I’m not going to make it in any of them! But if that was the case I’d probably have to choose one of my three favourites – Metallica, Iron Maiden or Queen!

Lee: “It would have to be between Iron Maiden or the Chili Peppers. The Chili Peppers were the first band I saw live, but as I grew up I got into Iron Maiden big time. The fact that they’re still going at whatever age they are now I think is just so impressive… and the guitar work is pretty impressive, too!” 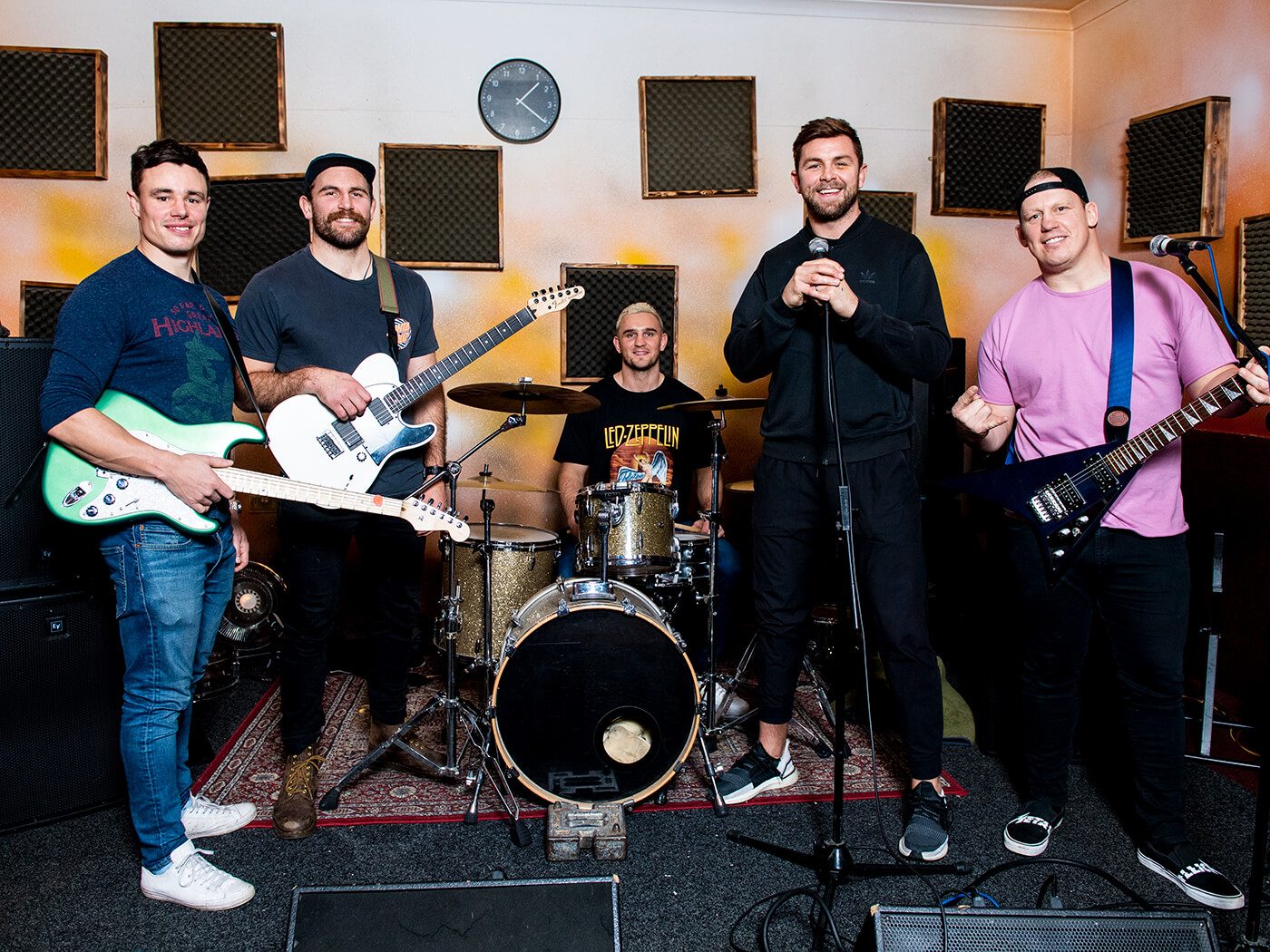 Lee: “Again, I’d probably have to say Chilli Peppers at Slane Castle [the 2003 Irish gig that was released as a concert film – Ed], that would be a great time.”

The most important thing on my rider

Petrus: “Oh, I think you’ve gotta go proper, old-school rock ’n’ roll on that rider, don’t you? Actually, the thing that most appeals to me, is that I imagine it would be really fun to be on a tour bus!”

Petrus: “Y’know, I only feel guilty about it this because I’ve been playing it for so long, but the first song I ever learned on guitar was Nothing Else Matters and I still just love playing it today. It just sounds so good when you sit down and play it on an acoustic, I can’t help it!”

Lee: “I listen to Country Hits FM in the car on the drive home from training a lot – I think it’s my wife’s influence! But the thing is, there’s some great guitar work on those songs…”

Lee: “Aye, there’s one song, and that’s John Mayer’s Neon – it’s just ridiculously fiddly, and I’m sure I’ve attempted it in the past but maybe I’ll get back to it one day when I’ve got a bit of spare time, but for the moment that is just next-level. And he sings it at the same time!”

Petrus, Lee and fellow Glasgow Warriors players Callum Gibbins, Ryan Wilson and Adam Ashe will play a one-off gig at the Hard Rock Cafe, Glasgow on 15 February 2019, raising money for the Glasgow Children’s Hospital Charity. Tickets are priced at £15, and are available from tickets-scotland.com.