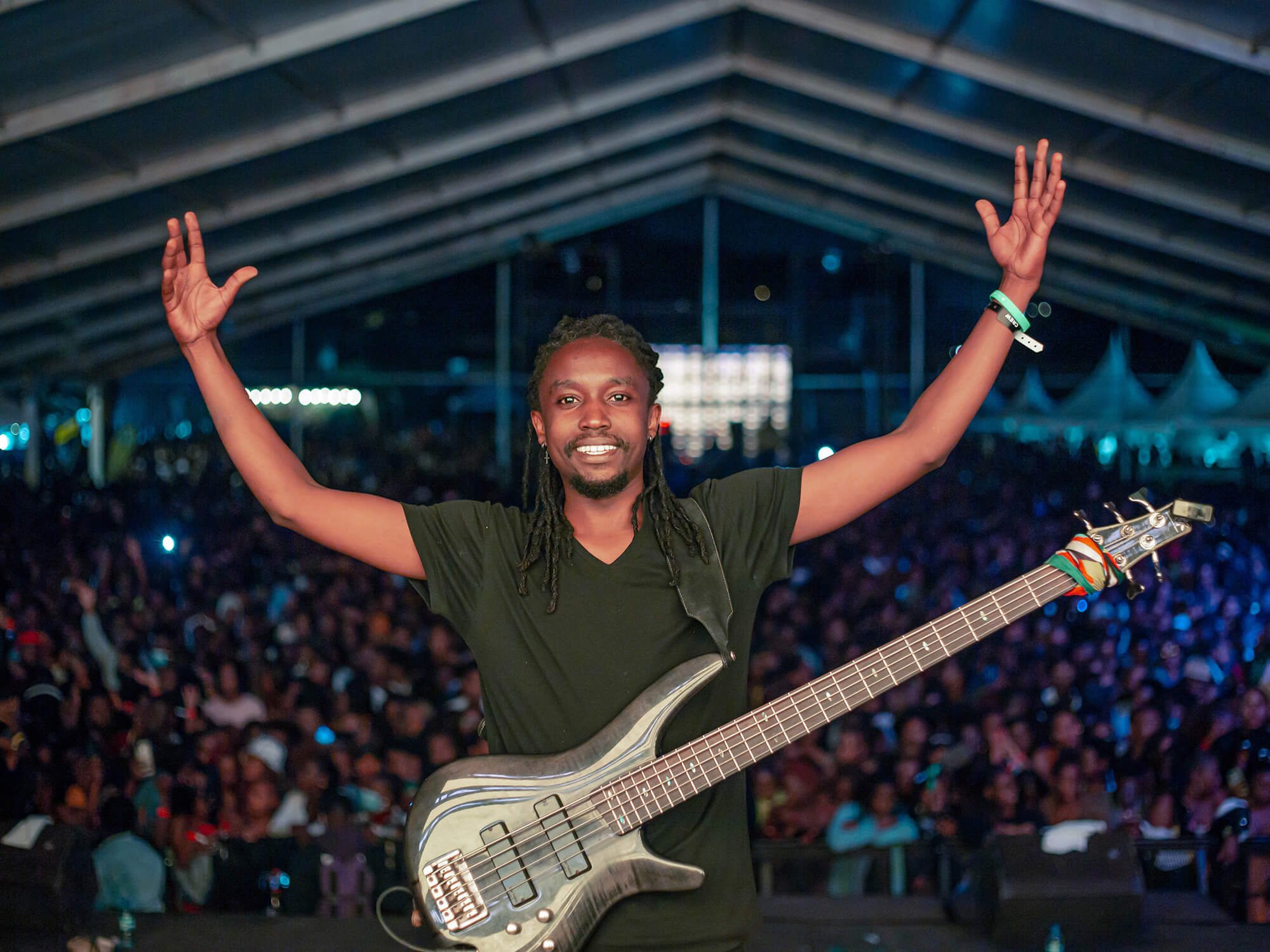 As a member of renowned Kenyan Afropop group Sauti Sol, Ivano Bass has received acclaim from across Africa and the world, but getting there was not straightforward – as Deo Salvator finds out.

Yvan Kwizera is known professionally as Ivano Bass, and it will not shock you to learn that he’s a bass player for the critically acclaimed Kenyan Afropop band Sauti Sol, who have earned awards and nominations over an 18-year period, including nominations for an MTV EMA and a BET Award. He’s also struck out as a solo artist and is poised to release an album very soon.

A professional bassist for 11 years as well as a talented singer, guitarist, pianist and arranger, Yvan originally hails from Burundi, but his journey to success from some of the most difficult beginnings is a testament to the power of hard work and determination, and the importance of never giving up on your dreams.

Before joining Sauti Sol, Ivano was a member of the jazz rock trio Mutcho in Bujumbura, Burundi. The band was successful in building the jazz rock scene in the city and hosted music workshops, however Mutcho’s prospects would be cruelly curtailed by events beyond their control in 2015, when violence and unrest surrounding an atempted coup d’etat in 2015 led the Ivano and his bandmate Nganji Arnaud to flee to Rwanda.

It would have been easy for the pair to respond to such a cruel setback to their musical ambitions by packing it in – especially when they found themselves in an unfamiliar country and the prospect of effectively having to start from scratch. But when they got to Rwanda, the pair decided to give it their best shot – Ivano first joined the band One Million Dollar, while Nganji formed the successful and influential blues-rock band Kinga Blues.

For Ivan his perseverance in starting again would pay off when Sauti Sol – who by that point had been going for over a decade and were three albums into their career – needed a new bass player. Hearing the word on the grapevine about Ivano’s skills, the band offered him a contract in 2017, with him beginning to play alongside the band’s existing members Bien-Aimé Baraza, Willis Austin Chimano, Savara Mudigi, and Polycarpe Othieno in 2018. He has also recently played on Sauti Sol’s latest single Brighter Days.

With his diverse range of musical influences and collaborations, Ivano’s talent and dedication to his craft have made him a valuable member of Sauti Sol and a rising star in the music industry.
After contributing to the theme song for the children’s movie series Thomas & Friends and playing on all the songs on Sauti Sol’s 2020 album Midnight Train, I vano has also worked with many notable artists, including Kidum of Burundi, Davile of Jamaica, P-square of Nigeria, Pilani Bubu of South Africa, and Isaiah Katumwa of Uganda

But Ivano is more than just a bass for hire for Afropop’s biggest names – he’s also a solo artist and has released a number of singles, most notably Afrika Hasara a track that sees him express his grief at the conflicts and divisions that plague many nations of Africa, including his home, as well as the frequent issues of corruption, drought, famine, and floods.

Despite these challenges, Ivano remains a pan-Africanist, believing in a united, sovereign Africa where free movement is a reality. On a recent visit to his motherland, Ivano had the opportunity to share a message with the youth of the nation. He encouraged them to ignore the negativity of politicians and work towards a future filed with hope and potential – using his own success as an example of what can be achieved.

“My journey to success was a marathon, not a sprint, and I never let doubts or challenges hold me back,” he explains. “Through grit and perseverance, we all can reach the pinnacle of our dreams.”

This will all come to its apex with his debut album, “Mtungi Groove” Vol.1 , which will be released later this month, and a reminder of how far he’s come. Ivano’s journey from war-torn Burundi to the top of the music scene is a testament to the power of hard work and determination.