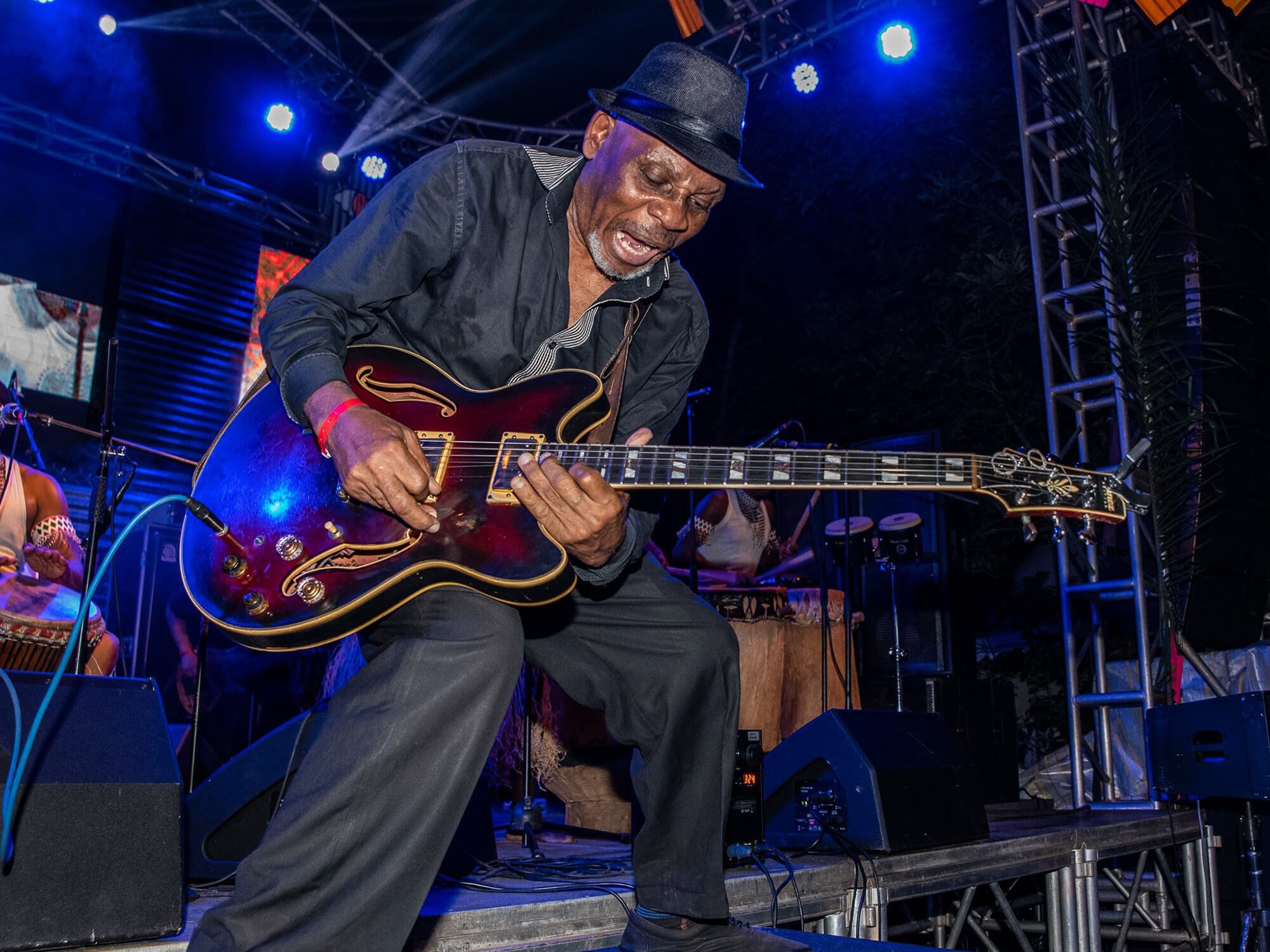 Guitar Tales: The remarkable impact of Congolese guitarist Tamfum/Fidel, and the tuning that would define a whole genre of guitar music

His use of an alternate tuning would be the bedrock for scores of soukous hit singles, but the legend that is Tamfum/Fidel has had a unique and varied career across Africa, Europe and Japan.

It’s near-impossible to talk about the history of soukous, the Congolese-derived dance music that swept to popularity in Africa and France in the latter half of the 20th century, without mentioning Tamfum. The guitarist, who was known as Fidel in the 1970s, hails from Kinshasa, the capital of the Democratic Republic of Congo and he’s legendary within the scene not just for his fearless touring across Africa, but also because he was a pioneer in the use of alternate tunings when playing soukous music. This is the story of a man whose legacy strides four decades.

Born in 1950, Tamfum began playing the guitar at an early age, receiving his first instrument, named Flamous, from the legendary Congolese guitarist Docteur Niko. Tamfum played with numerous bands in Kinshasa and achieved widespread success, but his most widestreap recognition came for his rhythm guitar playing in Vox Negro, particularly for his use of the ‘Mi Composé’ alternative tuning, which gave his music a distinctive sound similar to Hawaiian guitar. Mi Composé, involves replacing the D string with an E string, raising it by an octave, and tuning it to D, which gives a C# tone on the D string.

“All the songs I recorded using Mi Compose tuning became hits all over east and west Africa plus Europe as well,” Tamfum tells us. “At least 10 million records were sold because of that guitar! That’s what enabled me to survive and tour – I would arrive in a country and they would say, ‘Fidel is here!’ and give me gigs because they knew the songs I played on.”

The influence of Tamfum’s Mi Composé tuning would also be influential on the wider scene – and you can hear it regularly in in the music of Rwandan bands such as Les Fellows Band and Muhabura’s Band among many others.

Despite the unique and compelling African rhythm it created, the tuning had limited versatility, making it difficult to play non-Soukous songs. In an effort to expand the scope of his music and make it more inclusive, Tamfum began exploring more traditional tunings and played in various bands in Kinshasa, including Afrique En Fiesta Sukissa with his old mentor, Docteur Niko. Through this experience, Tamfum’s guitar skills and knowledge of Mi Composé’ techniques were greatly enhanced, with Niko’s big grother Gerchom even declaring him the next ‘Mi Composé legend’ in Kinshasa.

Tamfum owes a lot of his knowledge to touring – but this was far from a comfy tour bus life! In 1976, Tamfum embarked on a journey to tour Africa as a guitarist – no easy feat given the turbulent political situation across the reason in the wake of colonialism. He began his journey in Kinshasa and travelled to the important port city of Kisangani by boat, where he stayed for six months playing with Singa Mwambi. He then took a track through the equatorial forests to the city of Butembo and then on to Kasindi a town on the border of Uganda and Congo.

Upon arriving at Kasindi, Tamfum noticed significant cultural differences, including the language spoken by the locals – there he joined a Congolese band called Les Kinois and also played with the Virunga band, and played with them for three months, but his ambition was to go to Kenya.

The bands wanted him to stay in Uganda, but the unstable political climate under Idi Amin’s regime made it difficult for him to stay, and so he left for Kenya. Upon arriving in Nairobi, he joined a band called Baba Garçon and had success with his Mi Composé hits. He then moved on to Mombasa and eventually to Rwanda in 1979.

After his arrival in Kigali, Tamfum worked with the French Institute to put on a performance at the Collège Saint André in the city with his band Les Fellows. The concert was a huge success, and various big names from the local scene turned up, including Orchestre Impala – who are to this day probably the biggest band Rwanda has ever had. What’s more Impala were more than curious observers – they knew him from the hits he’d already played on.

In 1982, Tamfum returned to Rwanda and again gave a concert at the French Institute in Kigali. This time the demand to see him was so intense that the theatre was damaged and there was “blood everywhere” due to how congested the venue was and how wild the crowd went at his performance.

With this rapturous reception fresh in his mind, Tamfum returned to Kenya to form a band from his old contacts there, and then embarked on a tour that was supposed to take them to Europe with stops in Congo, Bangui (the capital of the Central African Republic) and Cameroon – as seems to be the way with Tamfum’s tours however, the band enjoyed themselves so much, they ended up getting sidetracked.

“When we reached Bangui, each band had its own bar to play at and we knew no one. We went to a hotel and asked the boss to play a bit and sleep there,” Tamfum recalls. “At 5am the band leader had been informed that there were intruders in their bar. He came and asked us who we are and what we want. I said that we are musicians who are just passing by and would love to play a concert with them then will head to Cameroon after. They agreed and we played together. We stayed for four months! Then we took off to Cameroon.”

The band made good money on the tour, and treated themselves to a flight from Cameroon to their next stop, Togo, but this ended up being a cursed decision.

“The band were arrested upon arrival in Togo due to visa issues,” he explains ruefully. “They sent us first to Ivory Coast, then Nigeria, then back to Ivory Coast and finally back to Cameroon, where our lack of visas saw all of us deported back to Kinshasa – our plan to go to Europe had failed.”

With the calamity of the aborted European tour behind him, in 1983, Tamfum and a singer named Kayindo, both armed with just acoustic guitars, set out on a tour through Central Africa performing French songs.

The duo’s shows were a resounding success, and even taught guitar lessons to French soldiers stationed in the region. Tamfum later received a call to go rehearse for gigs in Japan with a band in Kenya, but it didn’t pan out as he was unable to bring his touring partner along. That wasn’t the end of the story however, and in 1990 the band approached him again and this time he joined them, playing in Japan for five year.

After his time in Japan, Tamfum took a two-year contract with the Sheraton Kampala Hotel in Uganda, where he met the renowned Rwandan guitarist Kiri – a huge fan of his, who would later join his band.

“I was on the stage playing at the hotel and this young man came to me and knelt down and the crowd was in shock and confusion as I was,” Tamfum recalls. “After a song I approached him and he said, ‘Master can you teach me how to play guitar?’ I said, ‘Don’t be silly, just get up and sit there, we will talk after the show!’ I then told him to come to my house from time to time for lessons and when I moved to Rwanda to undertake a contract with Cadillac (a nightclub in Kigali) in 2005, I was so happy to find Kiri in Kigali and I put him in my band as well.”.

Since then, Tamfum has made Kigali his home base, but frequently travels internationally to perform at festivals. After decades of playing on hit records for other people, he’s also finally preparing to release his first album, which will showcase a fusion of traditional African rhythms and contemporary music genres – it’s been a long and unconventional journey for this hugely influential guitarist, but one he wouldn’t change.

Find out more about Tamfum on his Facebook page.