The comedy star is selling some of his favourite guitars to benefit a cancer charity. We pay him a visit in Los Angeles to check out the highlights.

“Tweedy is really fucking funny.” We’re sat with Jeff Garlin in the living room of his Mullholland Drive home while the award-winning comedy actor and stand-up comedian is considering which of his many musician friends could make it as a professional comic. As well as revealing which other guitarists he finds funny, Garlin insists that Wilco frontman Jeff Tweedy has the chops to make it in the cutthroat world of stand-up comedy.

But first, down to business. Back in early 2020, Guitar.com visited Garlin to peruse his impressive collection. Like many of us, he’s spent the year and a half since buying, selling and trading gear to kill the boredom of extended periods of inactivity during lockdown. However, with the assistance of Los Angeles retailer Imperial Vintage, Garlin recently decided to take the more drastic step of putting almost all of his guitars up for sale for charity.

“Here’s the thing,” he explains. “I love guitars. I love talking about guitars. I’m passionate about guitars. But I have too many guitars! I’m on the board of a wonderful charity, literally called Fuck Cancer. It’s a charity that’s about prevention, and when somebody in your family comes down with cancer, we help you get all the right care, the right information. I’ve helped before. I’m a photographer also and, when I had my first show, the profits all went to Fuck Cancer. And so I thought, ‘I have a bunch of guitars, I’m gonna sell most of ’em to help people who are dealing with this’. That’s really it. I like doing that stuff. I make more than enough money being a comedian – I’m successful enough.”

“I never want to buy a guitar, no matter how valuable it is, if it doesn’t play well and it’s not a good-sounding guitar”

As noble an endeavour as that is, it still sounds like a wrench. “They are all gut-wrenching, I love them all! But that’s the thing, what would I rather have? Something sitting on my wall and getting played occasionally, or someone who’s in a lot of pain being helped?”

Garlin, who hosts a show on Gibson TV with Jimmy Vivino, is enthusiastic in his praise of the Nashville company’s recent output. But when it comes to vintage guitars, his passion is for a specific era of Telecaster production. “My jam is 1959-64 Fender Telecasters with rosewood ’boards,” he says. “But I especially love the slab ’boards. The only reason I go up to ’63 and ’64 – because they’re not slab ’boards – is my love of Mike Bloomfield. He played that ’63 Telecaster with Dylan. He was a Jew from Chicago, which is what I am, so he’s a hero of mine. I’d rather go to war with a fucking Telecaster than I would any Gibson guitar. But man, are Gibson guitars beautiful. I love what they are doing, they are passionate.”

As a buyer, Jeff prioritises playability and tone over originality and collectibility. “I never want to buy a guitar, no matter how valuable it is, if it doesn’t play well and if it’s not a good-sounding guitar,” he asserts. “I know some people would love an original ’59 Les Paul, and generally most of these quote unquote dentists, or whatever, they don’t give a shit what it sounds like. It’s like, ‘I have one, it’s all-original’. That’s not my thing.”

Garlin is about to head out on a stand-up tour to benefit US comedy clubs hit hard by 2020 lockdowns, waiving his fee at a dozen venues across the country. In June 2022, he heads to Europe for a string of comedy dates that are all set to feature a musical finale.

“When I go on that tour, I’m gonna be bringing my guitar,” he reveals. “I’m making my guitar debut in Europe in June. At the end of my show, without saying anything – even though I’m telling you now! – I’m going do Boogie Chillen’ by John Lee Hooker. The guitar and the amp will be out there for the whole show, to the side. But it will never be mentioned. I’ll walk off, people are leaving, they’re probably going, ‘What was with the guitar?’ and I’ll come back out, I’ll just sit on the stool and I’ll play it. And I’m gonna do it in a real sincere, bluesy manner that I hope people dig. I’m not doing it for any other reason than I just dig it and it’s gonna make me happy.”

At a time when the whole world feels like it could benefit from an injection of positivity, Garlin’s enthusiasm is infectious. “I think the most ironic name for a show for me is Curb Your Enthusiasm. Because I am the most super-enthusiastic guy. My girlfriend is always trying to calm me down. My ex-wife would always try and calm me down. They love me but I’m an enthusiastic fucker, what can I say?”

“I need a well-made Gibson or Fender to start with or I’m screwed! If I work hard, can I be pretty good? You bet. Can I be better than pretty good? I don’t think so”

Garlin is obviously no stranger to the stage but playing guitar in front of an audience brings its own unique dangers. “I will probably be vomiting,” he admits. “Because I’m very relaxed, and stand-up? I improvise a lot and I’m so confident. It’s not an ego thing, I’m just confident that when I go up on stage I’m gonna do well. Sometimes the audience doesn’t think I’m so funny! But I pretty much do well. This? My gut feeling is that I will be pretty nauseous. 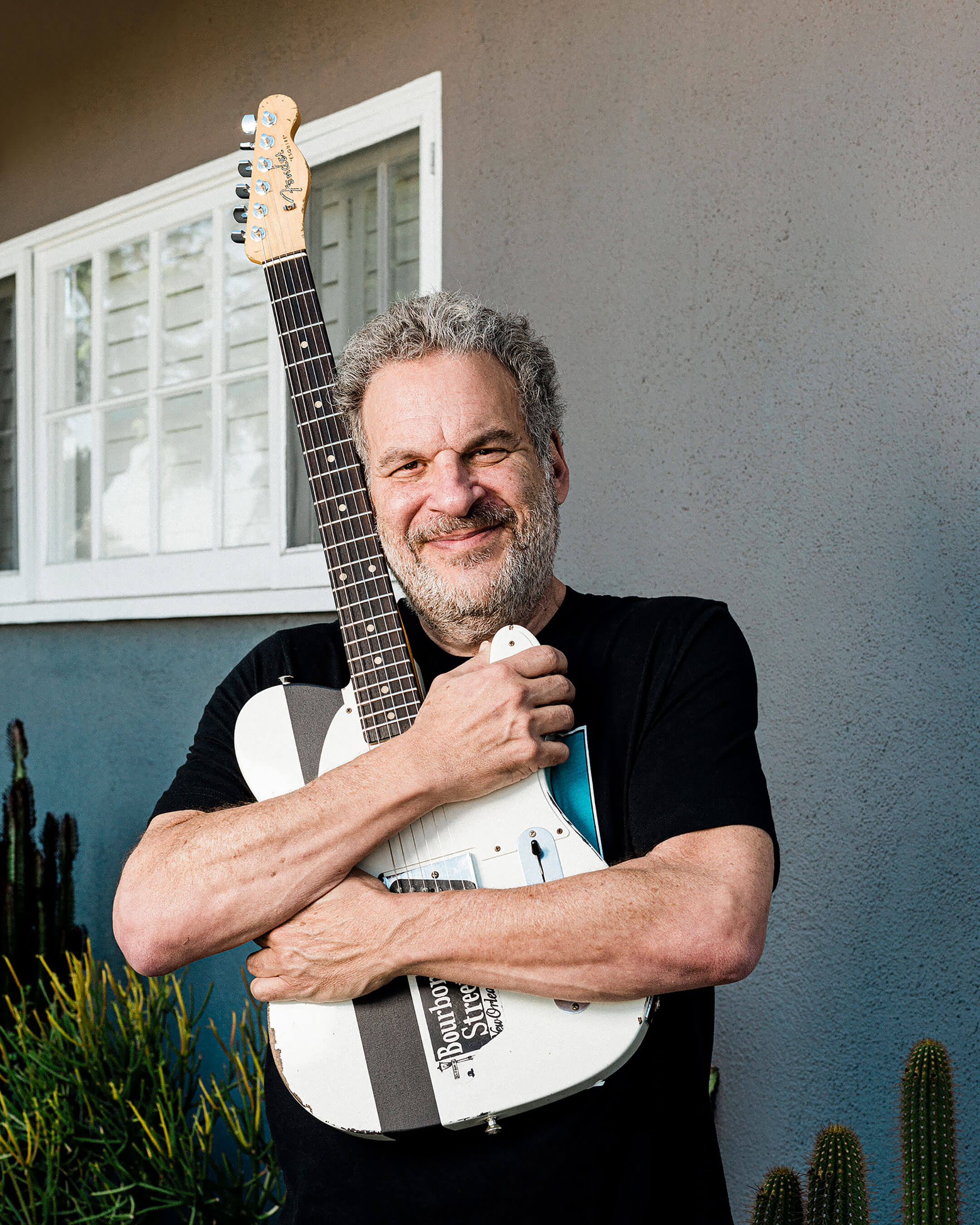 Though Garlin is self-deprecating when it comes to his guitar abilities, ahead of his live debut, he’s prepared to put in the hours to improve. “I’m gonna get better and better,” he says. “I will practice so hard and I will know it inside out. But let’s use comedy as an example. A guy goes, ‘I’m pretty funny, my friends think I’m funny, I’m gonna be a comedian’. Goes on stage, goes on stage, goes on stage. What that person can eventually do is become competent as a stand-up comedian. They might become a good writer, a good performer. Do they have it in them to be great? Probably not.

“When you listen to Wes Montgomery, Buddy Guy, Mike Bloomfield, any great guitarist… you can give them the cheapest bullcrap guitar and they are gonna make it sound gorgeous. I need all the help I can get! I need a well-made Gibson or Fender guitar to start with, or I’m screwed! If I work hard, can I be pretty good? You bet I can. Can I be better than pretty good? I don’t think so.”

As a Chicagoan, Garlin feels strongly about keeping the blues alive, and he’s spoken in the past about the commonality between blues playing and improvisational comedy. “For my style of comedy, life has to bleed into the art. But the thing about it is, out of the blues comes music that makes you smile. And, out of my blues, comes comedy that hopefully makes you laugh. It’s the same thing, it’s taking this difficult thing – the pain of life – and making it funny.” 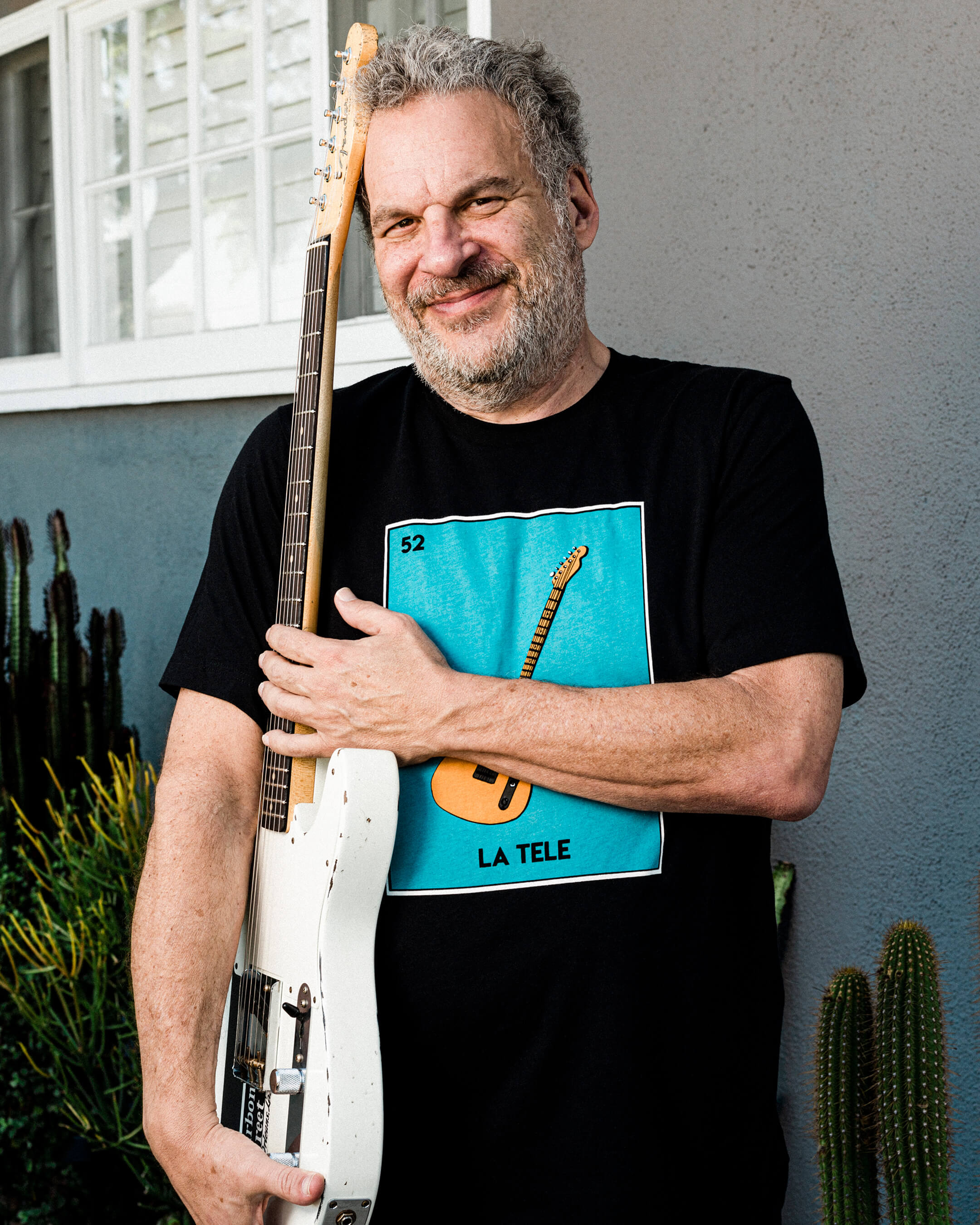 Which brings us back to Jeff Tweedy. “Jeff is a friend of mine, I love the guy,” says Garlin. “I was helping him to write some stuff for his solo tour once, and then at a certain point as we’re talking I’m going, ‘You’re funny as yourself, just go up and be funny. I don’t need to be helping you write stuff’. And he is that funny. He gets big laughs when he goes up there.”

The Wilco star isn’t the only serious musician who makes Garlin laugh. “Here’s somebody – and I don’t care if I’m outing him – Jonny Greenwood. He’s got a great sense of humour. What is Jonny Greenwood’s passion? He loves comedy, the history of comedy. Now there’s a guy who you see onstage and you think, ‘Eh, he doesn’t like comedy.’ But he loves comedy. He loves comedy! Laurel & Hardy? Doesn’t fucking matter. The dude loves comedy. Jack White – another one who loves comedy and you wouldn’t think it. He’s a funny dude, we share laughs, he’s funny. John Mayer? I’m sure he’d like to take a year and switch and be a comedian. He’s got a great sense of humour. 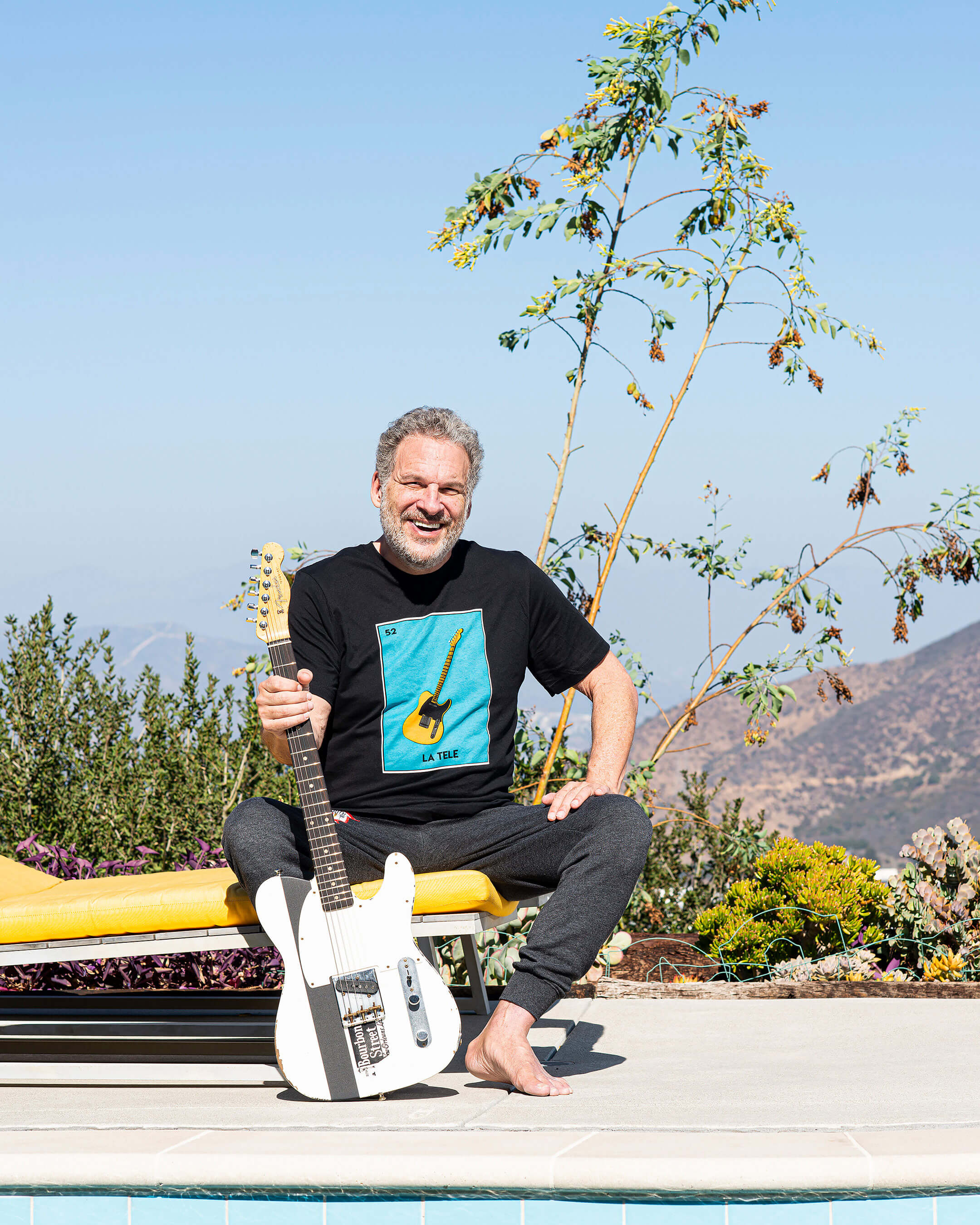 “I get to know all these musicians because they love Curb Your Enthusiasm,” Garlin reveals. “It’s the beginning conversation in all my relationships with musicians. From Ben Folds to Radiohead, Wilco, Joe Bonamassa and more. A lot of comedians would like to be rock stars, and a lot of rock stars would like to be comedians. But the only one I’ve seen where I could work with them and they could really be a stand-up is Tweedy. Tweedy can tell stories, there’s a certain little twinkle in his eye… he’s got the richest sense of humour.”

Season 11 of Curb Your Enthusiasm is out now on HBO. To see the full inventory of Jeff Garlin’s charity guitar sale, visit Imperial Vintage. Head to jeffgarlin.com for information on his upcoming shows.