“The whole album is one big piece of art”: The Night Café on new album 0151

Guitarists Sean and Josh reveal the process of developing from a “little indie band” to writing an 18-track debut LP. 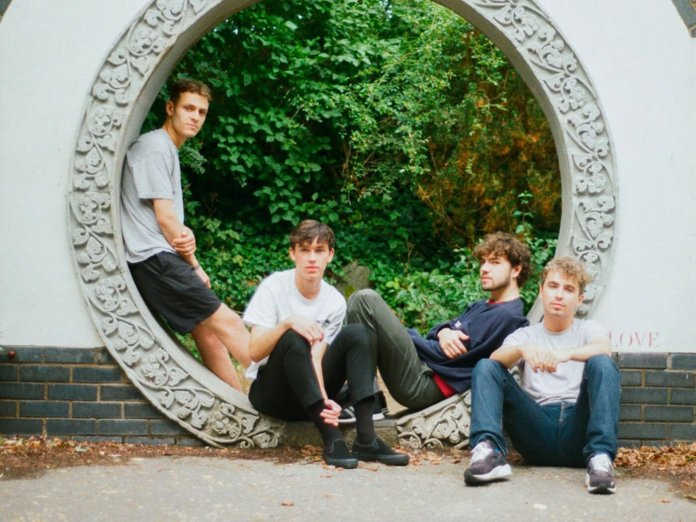 On the surface, The Night Café appear just like any other indie band that’s plucked off the conveyor belt, but dig a little deeper and you’ll find a quartet that’s truly dedicated to the development of their craft and the album format as an artistic outlet.

The last few years for the band have been something of a whirlwind. Their first single, Addicted, was released way back in 2015, but in the four years that have followed, they’ve released two EPs, toured relentlessly and found time to record their debut album.

Sean, Josh, Carl and Arran met at secondary school and bonded over a shared love of guitar-driven music. Sean and Josh, the band’s resident six-string aficionados, grew up learning to play together, so it’s fitting that their first foray into the music world is as members of the same band.

“I was listening to the likes of John Mayer and BB King. My goal growing up was to be able to play a blues solo,” Sean laughs, “while you [Josh] were listening to proper hardcore and emo stuff!”

The title of their album is 0151, is a fitting bow to their home city of Liverpool – it’s the city’s telephone Area Code – and this choice brought about a new level of substance. The band reveal they chose the name fairly early in the recording process, thus allowing them to plan the record and artwork around the name, in the aim of producing a meaningful body of work.

Surprisingly, both Sean and Josh reveal during our conversation that the album became a far cry from what they assumed their debut would be. “I think to be honest, it sounds a bit different from what we thought our first album would sound like. But tonally, it sounds exactly the way we wanted it to.”

Though still in their early 20s, their vision for the future of the band is admirable, already viewing themselves formerly as “a little indie rock band”, but now, due to the extensive work on 0151, they see themselves as a band with much more musical acumen. “We thought we’d write a standard 12-track album with two singles and we ended up making an 18-track album with some songs that aren’t even indie at all! Some are quite soulful and then some are quite punky.”

What’s immediately audible is that both Josh and Sean aren’t in it to simply be another cool indie band. Their previous EPs earned them a strong reputation as a band that can write a pop hook at the drop of a hat, and they were conscious of their previous work while developing 0151. “We felt like the first two EPs were just the first album in themselves, they were just spread out over a few years. I think we wanted to come out with a full piece of work, rather than something that consisted mostly of stuff that’s already been out for a while.”

As an introduction to The Night Cafe, this long player is indeed just that. With 18 songs to sift through, it’s a true reflection of the past, present and future of the Liverpool-based foursome. “Although it’s an 18-track album, I think it’s 14 or 15 actual full songs. The other four are interludes and musically interesting parts. We wanted to make an album, rather than think about each single getting streamed over and over again.”

Reminiscent of the lengthy debut released by The 1975 back in 2013, the band are keen to reveal the influences they bear from indie bands of the last British revival. “The band I always think about when I talk about how we wanted to structure our album is The Maccabees. Purely because, on their albums, they just make sure every track links. Given To The Wild flows so nicely. I think proper musicians find it a lot more rewarding to listen to the album the whole way through.”

Inevitably, as a new indie band, there will be legions of young listeners expecting an extended batch of singalong hits and minor guitar hooks, but both are keen to ensure that people are prepared to hear an album with more intricacies and depth than they might anticipate.

“I think the album as a whole is for our own gratification. Obviously, there are singles and there will be people who literally just want to hear single after single and that’s fair, some people just listen to music that way. But a lot of people really should be prepared for this as a body of work. At the end of the day, the whole album is one big piece of art, it’s not just little bits and songs here and there.”

“There’s one song on there called I Know (I’m Sure) and it’s like seven minutes long! That all started just while we were in the practice room. I was messing with harmonics on the guitar without thinking anything of it and then one of the boys just started just playing along – then we just structured the song throughout and did it all together in the room.”

Given the pedigree that comes with being a Scouse band, you might think that The Night Café feel the pressure that comes with being a band from the North East. However, that doesn’t seem to be something that crosses their minds. “It’s not a legacy we’re trying to carry, but one that we’d like to. I think we’d like to be known as a big band from Liverpool and it’s good that there’s bands that have existed before to sort of shine light on the city.

“Bands like Circa Waves and The Wombats have transcended being in a local scene now you know. Our promoter has said we’re the biggest band in the city that’s actually from the city at the moment, but we don’t just want to be known in Liverpool. We want to be a huge band from Liverpool, rather than the other way around.”

With their new long player now available and breathing new life into the indie genre, it seems The Night Café are not only aiming to be the torch bearers for a new era of music in the North East, but for the genre as a whole.

0151 is out now on TNC Recordings under exclusive license to AWAL Recordings.