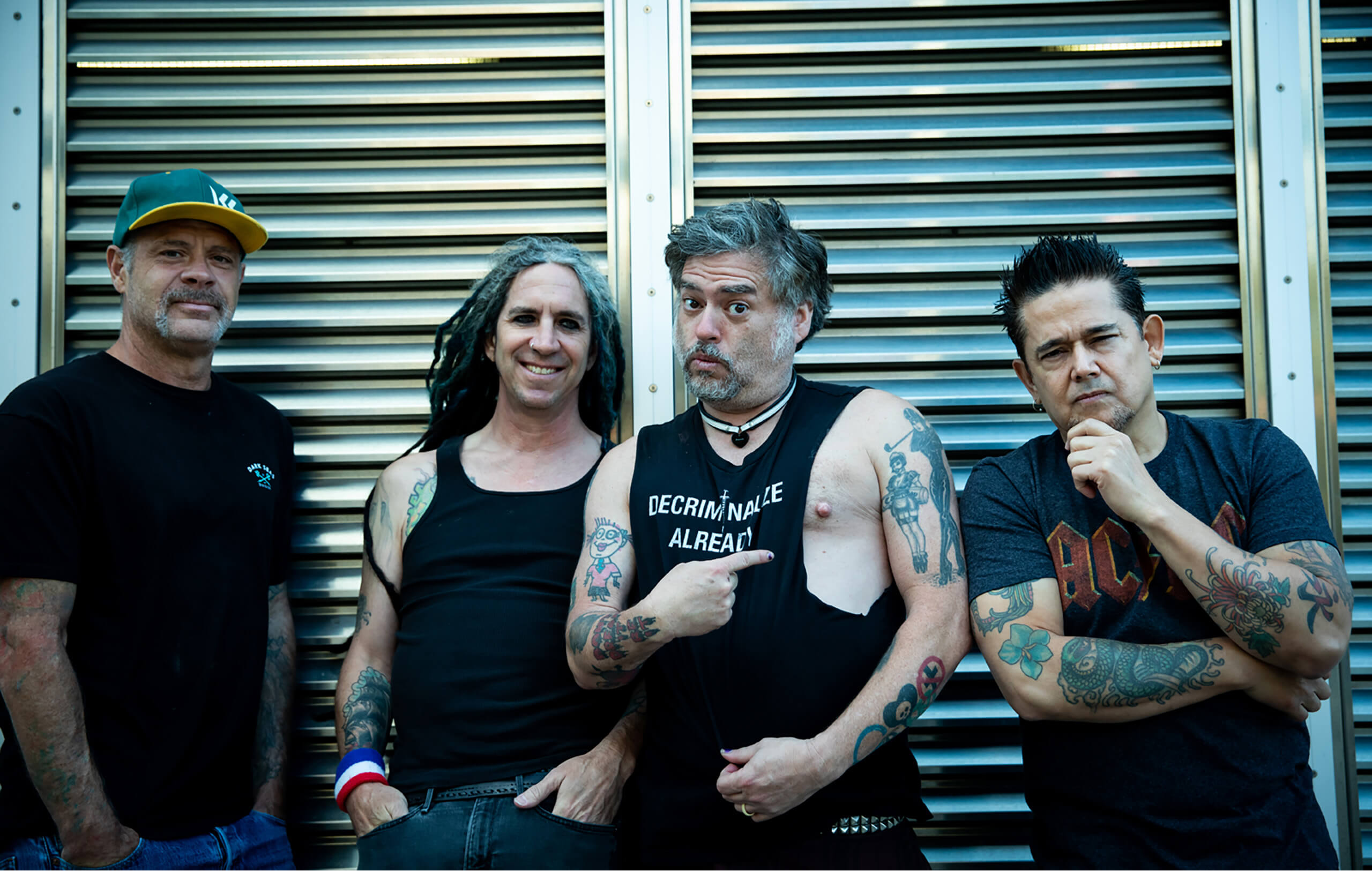 The outspoken punk legend on why he’s fed up of touring, why new LP Double Album is not one of NOFX’s best, and why trying to do things differently after 40 years is what keeps you punk as fuck.

Fat Mike doesn’t give a fuck today. When the NOFX leader and bassist joins our Zoom call, his manager’s operating his laptop and he’s got his bare feet up on the table, right in front of the camera. When he leans forward to talk, he divulges he recently moved to Las Vegas. When we ask why, he flippantly quips: “Addiction to drugs, gambling and sex.”

Mike’s mood seemingly reflects how he feels about the album he’s promoting. During our conversation, he says of the brand new Double Album – a back-to-basics sequel to last year’s progressive and lauded Single Album – “I wouldn’t pick it as one of our better albums”. Turns out, he’d much rather talk about the trilogy of albums he’s making next, why NOFX is retiring from touring and, umm, sex.

You’ve said before, “I don’t think there are any really good double albums out there.” So why have you made a double album?

“I like a challenge. That’s why I wrote The Decline [NOFX’s 1999 one-track punk rock opera]: a seventeen-minute punk song that’s extremely progressive, with an orchestra [the band recorded a live version with a full orchestra in 1999]. I’ve always got to push myself, and making a double album was harder than I thought.”

“I fell into the same trap other bands do: you think that, because you’re making a double album, you should go in more directions with the songwriting. Then you end up with some mediocrity. When you do a thirty-minute album, you record 18 songs and then you knock it down to 12. That didn’t happen with this album. There’s too much material and you want a well-rounded double album, which is so hard to make. The Beatles did it [with The White Album] but they have a bunch of shitty songs. Revolution 9 is hard to listen to. The White Album should have been a single album.”

So have you made a better double album than the Beatles?

“[Laughs] I didn’t say that. I’d rather listen to their double album than my double album, but I’m really glad that Single Album and Double Album came out with a year in the middle. Single Album, I’m so happy with that one. It was a great single album and Double Album is a great second half to that, but I wouldn’t pick it as one of our better albums.” 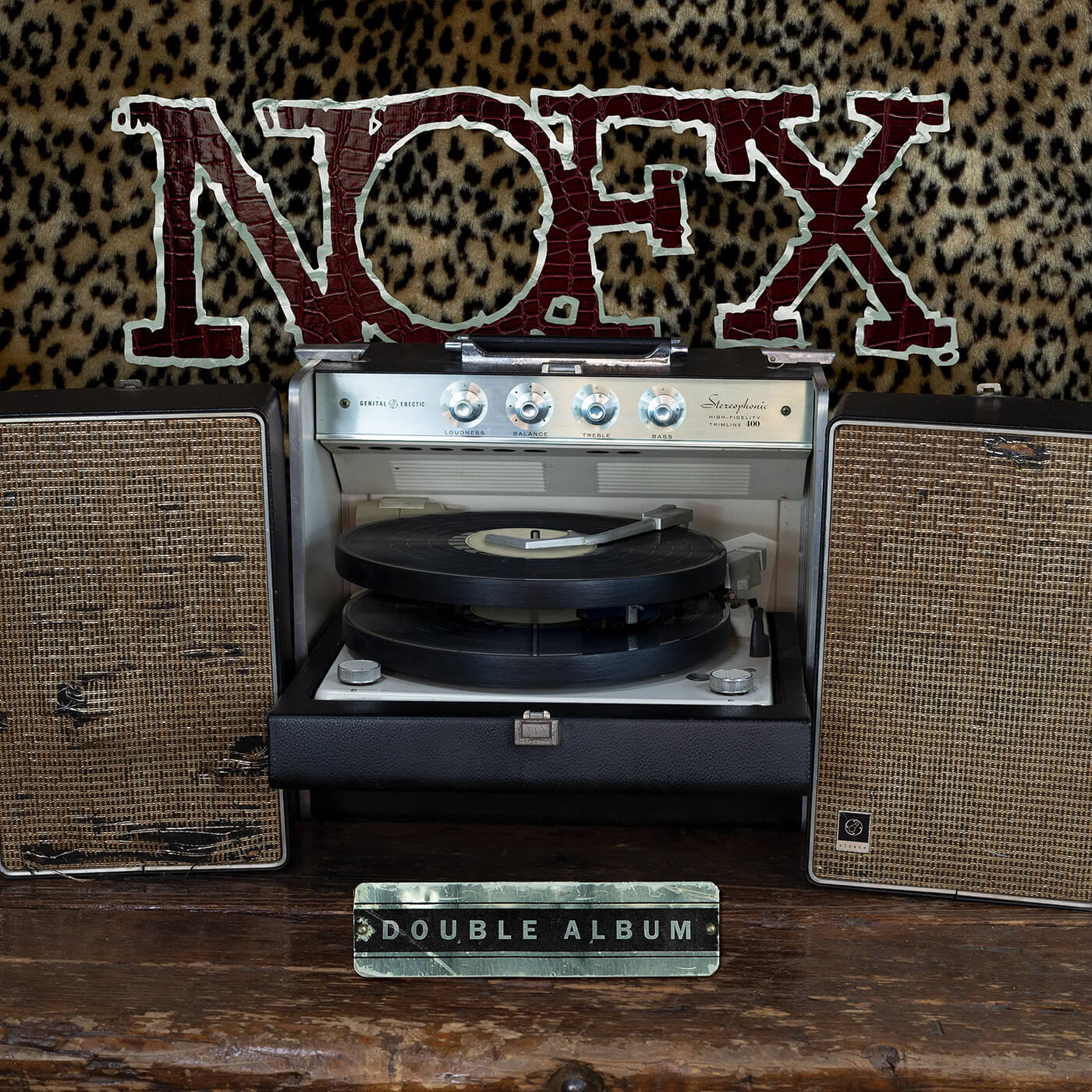 “I think it’s our funniest album and I think the basslines are my best basslines ever, but it’s more formulaic. It’s a record that will please NOFX fans a lot. I was writing different songs: ‘This doesn’t sound like any other song on the album, nor does this one.’ So it just happened that all the fast, funny songs [ended up on Double Album]. Any one of these songs would have fucked up Single Album.”

Was Single Album being a darker, personal album inspired by the pandemic?

“No, all of these songs were recorded six years ago. I take my time. I want the song to be perfect when it’s done. And the reason it took so long for Single Album to come out is because I wanted to finish the double album. And, although I did, I wasn’t happy with sides three and four. It had been four years, so I just said, ‘Fuck it, we’ll put out the first one.’ I spent, like, a year making Double Album better. I went in and recorded 24 songs with Bill Stevenson and Jason Livermore, and it just took a lot longer than I thought.”

What guitars and basses were used on Double Album?

“I always use the same stuff. I have a ’72 [Gibson] SG and a [Fender] Jazzmaster, but I don’t know what year it is. I use a [Fender] P-Bass. The Jazzmaster is a big part of that NOFX sound because it’s good for playing clean chords. A Les Paul is a good rock ’n’ roll guitar but it doesn’t have the clarity of an SG or Jazzmaster. When you’re playing complicated chords, you need a guitar that is very clear. AC/DC, it would weaken that band if they used Les Pauls, but Slash sounds great on a Les Paul. Les Pauls are fine but they’re not specific.”

NOFX are going to embark on your final tour in 2023. Will the fact that you’ll only be playing these songs for a few months mean your relationship with this album will be different to the older ones?

“It’s a good question but I don’t know. There are only a few records that NOFX have recorded that I’ll go back and listen to. I’ll listen to The Decline (Live at Red Rocks), Wolves in Wolves’ Clothing, War on Errorism and Self-Entitled, but I think Single Album might be my favourite of all of them. Last Resort just kills me. Lyrically, it’s so emotional for me.”

Since NOFX are about to stop touring, will this be your last album?

“No. I have three more records in the can already. We’re releasing one more side to this album called Half Album.”

When’s that coming out?

What can we expect from Half Album and Everybody Else Is Insane, sonically?

“Everybody Else Is Insane, it’s different. Most of the songs have a 16-chord verse and eight-chord chorus. One song has 54 different chords in a row, no pattern. Some of them repeat, but they’re incredibly complicated. That’s what makes my brain happy: breaking all the rules.”

That’s what punk’s all about, isn’t it?

“Absolutely, and I’m a lifer. I have to push myself all the time, musically and lyrically. People don’t know how complicated NOFX songs are. I’ve always said that punk rock is great music played by shitty, drunk musicians. You don’t start a punk band if you’re a good musician but, if you play long enough, you become a good musician.”

“When we started in the 80s, there wasn’t one hope of making a living off of it or getting bigger, because no one had ever done it. If you sold 10,000 records, that was fucking incredible. You don’t write songs that you think will get popular; you write songs that’ll touch people, but only certain people. If you write enough songs that’ll touch people, then you will touch everybody. But if you write one song for everyone, then you’re not doing it for you. I feel like my responsibility in this world is to help people find happiness.”

Have you done that?

“Absolutely. I think we’ve brought more happiness to the world and that’s the goal in life: happiness. People just don’t know where it is. That’s what I’ll be getting into more when I’m done with that: speaking about that – especially through sexuality. Sex is the greatest thing, but people don’t know how to be happy sexually. They go through the motions maybe once or twice a month. It’s so sad. People are cowards.”

Why are you stopping bringing people happiness through live music? Why stop touring?

“It’s been forty years, dude. I’m 55. I don’t need the adulation. It feels like work and I have to get so loaded to have a good time. I’m really excited about playing our last shows because it’ll be so awesome and emotional. We’re gonna play every song we’ve written, off of every album.”

Four years ago, NOFX made headlines because of comments you made on stage about the 2017 Las Vegas shooting. Has that affected your decision to stop touring?

“No. No one gives a fuck. There are still a lot of people in Vegas that are mad at us, so of course I moved there three weeks ago. [Laughs] I’m opening a punk rock museum here in January: 12,000 square feet of punk artefacts and stories. You can play my bass through my amp. We have legends giving tours: Glen Matlock, Roger [Miret] from Agnostic Front, Louiche [Mayorga] from Suicidal Tendencies. I’ve been punk rocking for forty years: I know people.”

Talk about your new band, Codefendants. Is this the replacement of NOFX?

“No. I’m the producer and co-songwriter, but it’s a totally different trajectory. It’s like nothing anyone else has ever heard. We spent a lot of money and made a movie: five music videos with one storyline. And every song is not like the one song before. It’ll be your new favourite band.”

How big do you think Codefendants can get? How much potential is there here?

“I think we’re gonna be the biggest band.”

How many platinum records?

We’ve talked about the past, present and future of NOFX, so, for the last question, let’s go even bigger. When, in the future, a journalist has to write the obituary of Fat Mike, what do you want it to say?

Double Album is out on 2 December.