“The more brash and loose a band is on record, the more I’m into it” Slash on Myles Kennedy and the Conspirators, recording live, and his legacy

We catch up with guitar god Slash to ask whether his main project is Myles Kennedy and the Conspirators or that other band.

Not that rock stars tend to exist within the confines of the traditional working week but you might say that Slash seems surprisingly chipper for first thing on a Monday morning. He has good reason to. His band, Slash featuring Myles Kennedy and the Conspirators, has just released its first studio album in four years: 4. It’s his fourth with this outfit and fifth solo outing overall, and he reckons this one might be the best yet.

Thanks to covid-19, 4 spent almost a year on the shelf. Prior to the band’s recent US tour – their first live engagements in nearly three years – it was finally let off the leash, and is evidence of a band in rude health.

The album was recorded live at the historic RCA Studio A in Nashville, Tennessee, with Dave Cobb at the helm. Dave Cobb the country music producer extraordinaire but also Dave Cobb the man perhaps best known for his Grammy-nominated work with Californian modern-day rock powerhouse Rival Sons. As with Sons, Cobb has captured Slash and co at their most feral. The results are damn impressive.

Rather than a man of flesh and bone, these days ‘Slash’ evokes a larger-than-life, almost mythological guitar god, identified by top hat, dusty aviators, gleaming Gibson guitar and jet-black mass of frizzy hair, such is Saul Hudson’s inimitable sense of image. His legacy is long assured. But having worked with Myles Kennedy and the Conspirators for 12 years – longer than his first, planet-conquering stint with Guns N’ Roses and twice the length of Velvet Revolver’s lifespan – what is his legacy?

Speaking from Los Angeles on Valentine’s Day, we chat to Slash about 4, Myles Kennedy, Gibson Records and GNR. “You’re my first Valentine’s call!”, he laughs. For that, Mr Hudson, we can only apologise… 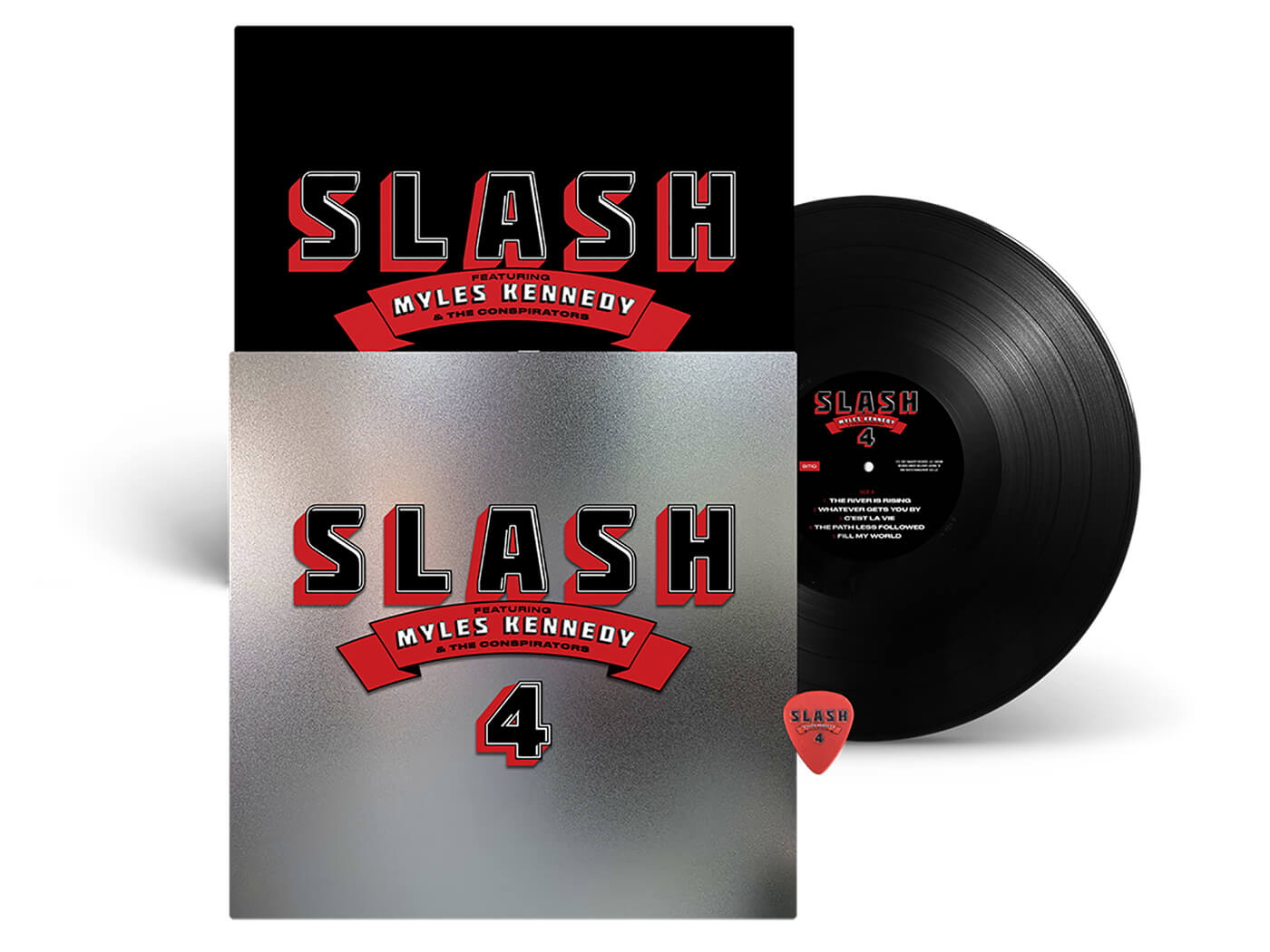 Was it a relief to finally get 4 out? What have you made of the initial response?

It’s been surreal and wonderful to see it out there. I avoid reading anything or looking for reviews but the general feeling is that the response has been really positive.

Half of it was written before the pandemic and half of it during but the record was finished last April. So it’s been sitting in the can for 10 months. As soon as it was mastered, I had to just forget about it. I hadn’t listened to it until right before we went out on the road so that we could relearn some of the songs. I was really pleased that it still sounded good [laughs].

What was it like working with Dave Cobb? Did it come about because of his work with Rival Sons? You’ve previously said that you’re a fan.

What happened was I heard Rival Sons on the radio in LA and thought, ‘That’s a good fucking band’. We did some shows and hung out with them around Europe but I never knew anything about Dave Cobb. The reason he came up was because I was looking to find a good contemporary rock ’n’ roll producer and it was a short list. When I checked out Dave’s discography, I noticed that the records he’s done, which are primarily country, were really earthy, raw, soulful records. Then I saw Rival Sons on the list and that was the icing on the cake.

I called him up and he wanted to do the record live. In my whole career, I haven’t found one person who’s been willing to just set the band up in a room and record as is, so that was refreshing.

Do you think this makes 4 the most authentic SMKC record you’ve done?

It’s a combination of a lot of things but first and foremost, every time we do a record, it seems to evolve or improve on the previous one. With the songwriting and performance, it’s never stuck in one place or going backwards. But yeah, this time we’ve been able to capture the band in its essence. Getting that energy of what the band is about. I’m a live guy anyway, so that is really important to me. The more brash and loose a band is on record, the more I’m into it. It makes a huge difference to hear the band without tinkering in the studio, compared to the previous record [Living The Dream, 2018].

For me, playing live is way more natural. That’s where the emotion of it comes out, with a more spontaneous delivery. There’s a connection with the other players that you’re experiencing, so when you go back and redo parts, there’s a vibe that you lose. There’s a trust factor going on where everybody has to rely on everybody else. A kind of tension.

Myles Kennedy seems like one of the nicest guys in the business. Dare I say he has less of an ego than other singers you’ve worked with?

He’s a sweetheart of a guy, very laidback, and we seem to have creative chemistry. For the most part it’s effortless. I’m always working on stuff and if I have something I’ll just send it to him or play it during soundcheck or on the bus. He automatically gets into it and starts thinking of melodies. From the very first thing we recorded, which was Starlight back in 2010, it’s been that kind of writing relationship and I really don’t compare him to Scott or Axl, because they’re different people.

When Myles and I started working together for that first tour, I thought, ‘This is a lot of fun, I’ll do the next solo record with these guys if they’re into it’. That’s what Apocalyptic Love [2012] was. Then we went out on tour and I wrote music for the next one [World on Fire, 2014]. It’s just been going on like that and here we are 10 years in.

Given that you’ve put out four records in 10 years, do you consider this band your main focus? Is Guns the side project?

No, I’ve been thinking about this. I think one of the great things about [GNR] and why there’s such longevity, and I don’t wanna jinx it, but it’s because we don’t take it too seriously. Guns N’ Roses was obviously my entire life and that’s where I come from. I’ll always be part of it and I don’t mind being recognised as ‘that guy from that band’. At this point I’ll probably do it till I’m pushing daisies.

It’s always been a lot of fun but it became a really big band, so the tension is palpable. Like with Velvet Revolver, everybody around that band had all these delusions of grandeur. Not the band itself, the people around it. It was very difficult, so it didn’t stand a chance long-term. With this band, it just sort of does what it does for the fun of it. I don’t think we’ve had any real expectations and we’re not trying to be huge or do anything apart from have a good time. That’s why it’s been so easy and gone by as quickly as it has. We spend a lot of time on the road and we just have a good time. Nobody really thinks about all the other bullshit.

And having signed with Gibson Records, it looks like there’s plenty more to come from SMKC. You’ve played their guitars for decades, so was this partnership a no-brainer?

When Gibson came and said they wanted us to do the debut release, I was taken aback for a second. I had no idea they were starting a label to begin with! But this is a magic pairing. As an instrument company, they’re all about music. Gibson is obviously big, but not corporate in the sense that it’s some fucking giant product behemoth. Most of the labels now are conglomerates and they have major companies that support and fund them. It can be very materialistic and about money, at the end of the day.

With Gibson, it was more about doing something that’s a little more down-to-earth. It seemed like a great idea and I’m actually working with a lot of the same people. But the best thing about it is that their hearts are really into it. They wanna do a great job and I’m excited for any artist that they pick up going forward.

It’s been widely reported that a new Guns album is in the works. Is it about building on the band’s legacy?

I really don’t have forethought with these things. I just do them! I always find that the best-laid plans don’t pan out the way you imagine them. With Guns, you just do it and see what happens.

Slash featuring Myles Kennedy and The Conspirators’ 4 is out now on Gibson Records.