From a fearsome dragon to a loveable mutt, we examine some of the most iconic Fender Telecasters of all time. 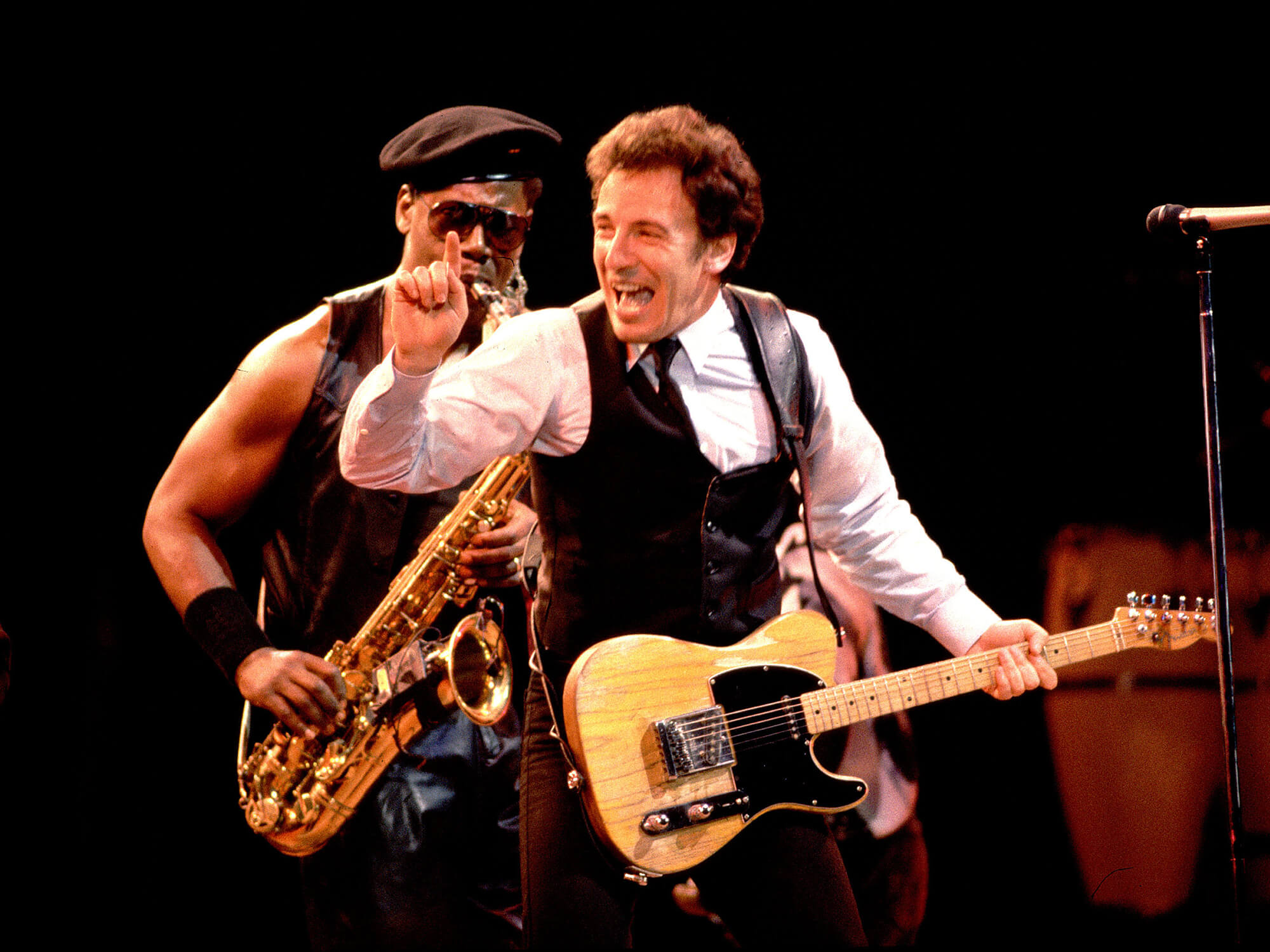 Though it cycled through a few different names before finally landing on what it’s best known as today, the Telecaster was the first-ever solidbody guitar.

This famous Fender model has been used on some of the most memorable music in modern history, and has proven versatile enough that it’s fit for country music stages as well as those of Slipknot and Rob Zombie. Here we’re examining five of the most iconic Telecasters of all time.

Keith Richards dubbed his beloved 1950s Telecaster ‘Micawber’, after a character in Dickens’ Oliver Twist. The guitar, widely believed to be a ’54, was given to Richards on his 27th birthday by Eric Clapton, just as the Rolling Stones were beginning to write their upcoming album, Exile on Main St. During the recording sessions in 1970, Keith removed the low E string and tuned the Tele to open G (G D G B D). Micawber was used across Exile and has featured on many records since.

Towards the end of the Exile tour in 1972, Keith’s tech, Ted Newman Jones III, swapped the Tele’s neck pickup for a 1950s Gibson PAF humbucker. He installed the humbucker backwards, with the magnet poles facing the tail of the guitar, likely to brighten up the tone. He replaced the bridge pickup, meanwhile, with that of a Fender lap steel, which he chose because he found it difficult to source pickups from Broadcasters.

Micawber’s wiring scheme remains a subject of some debate. The guitar is most often seen with its pickup selector in position one (bridge pickup). But most argue that its humbucker tone is clearly evident. Conclusion? Micawber may have been wired like a Broadcaster, with one volume control and the other knob used to blend in the neck pickup. There are other explanations but, given Keith’s affinity for Broadcasters, this isn’t unlikely.

Jimmy Page acquired this 1959 Telecaster from Jeff Beck during his time in The Yardbirds. Eric Clapton had been tasked with finding a replacement guitarist for the band upon his departure in 1965. He wanted Page. Page turned down the offer and recommended Beck instead. Legend has it that Beck gifted Page the guitar for helping him land the gig.
The ’59 Tele was stock at the time, aside from a homemade black pickguard added by Beck. Two years later, in February 1967, Page added eight round mirrors to the guitar’s body. Just a month earlier, Syd Barrett had added 15 mirrors to the body of his Esquire.

Whether great minds think alike or Page simply copied Barrett is unknown. Either way, Page’s reflectors only lasted a few months before he removed them, stripped the finish and repainted the guitar altogether. He also replaced Beck’s black pickguard with an acrylic one, and added a diffraction film so that a spectrum of colour would be seen when it was hit by light.

Page’s paint job wasn’t a standard refinish. Instead, he added an abstract representation of a dragon, blending the psychedelia of the late 1960s with his love of the great mythical creature. Page’s ‘Zoso’ symbol comes from an occult grimoire called Le Dragon Rouge (The Red Dragon). The painted dragon’s head and horns are said to be up by the neck pocket of the guitar.

The Dragon was Page’s go-to until 1969, when he promoted his Les Paul, Number One, to the top spot. But the Dragon took flight again in 1971 when it was used to record the Stairway to Heaven solo.

Page returned home from the subsequent Led Zeppelin IV US tour to find that a friend had taken it upon himself to repaint the Dragon. According to Page, the paint job was applied so poorly that it ruined the wiring, to the point where only the neck pickup worked. Page claims to still possess the Tele but says it’s too ugly to ever see the light of day again. The neck, at least, was salvaged and installed on the brown B-Bender Tele that he used in 1980s supergroup The Firm.

In the early 1970s, New Jersey luthier Phil Petillo frankenstein’d a Telecaster together using a heavily modded 1950s body as the base. When Petillo obtained the 1950s guitar from a New York recording studio, it had four pickups, each with its own output jack. This unorthodox setup allowed the studio to record four guitar parts, on four separate tracks, with four different pickups. Unsurprisingly, to accommodate four pickups, the body had been routed in something of a swimming pool configuration, which made the body very light. The neck, meanwhile, was salvaged from a 1957 Esquire.

It’s unclear what pickups were in the guitar when it was sold to Bruce Springsteen for $180 in 1973. But it currently packs Joe Barden pickups, which have been waterproofed to protect them from the sweat they’re subjected to during the course of a Springsteen show.
Petillo, in conjunction with Bruce’s guitar tech Kevin Buell, replaced all the external parts of the pickups with titanium or stainless steel, and gaskets were used to keep the electronics dry. According to a 1984 interview with Petillo, “You could play [it] underwater”.

The waterproofing modifications and the excessive routing beneath the pickguard give the guitar unique tonal properties. Springsteen has referred to the Telecaster as his 1950s ‘mutt’. Much like a lovable pooch, the guitar has been Bruce’s constant companion for nearly 50 years. It has, however, been retired to studio duties and special gigs, such as his 2009 Super Bowl performance.

During the Beatles’ final public performance, atop the Apple HQ, George Harrison played an all-rosewood Telecaster. Fender had recently brought on builder Roger Rossmeisl, who had previously made guitars for Rickenbacker. Rossmeisl was tasked with coming up with all-rosewood Tele and Stratocaster prototypes.

It’s said that Rossmeisl made two of each. The best Tele prototype was to be given to George Harrison, the best Strat to Jimi Hendrix. Hendrix never received the Strat, and nobody really knows what became of the guitar (though there are rumors…). The Tele received by Harrison, however, worked wonders. Because rosewood is heavy, the guitar was chambered to aid weight relief, borrowing production techniques from the Thinline, which Rossmeisl was also creating during this period. The Tele’s pickups, meanwhile, were wound by Abigail Ybarra.

Fender made multiple replica runs of the guitar over the years. Harrison himself gave his away to Delaney Bramlett, who auctioned it off in 2003. The buyer? Harrison’s widow, Olivia.

And Rossmeisl’s second Telecaster prototype? It’s believed to have been sent to Elvis Presley. Even with Harrison’s endorsement, however, the production of all-rosewood guitars was never a popular sell for Fender.

During the recording of the first four Police albums and their subsequent tours, Andy Summers used, almost exclusively, a modded 1963 Telecaster. There are conflicting reports about how the guitar came into Summers’ possession. One story says that he bought the guitar from a student of his for $200, with all of the modifications already in place. Another, told in Summers’ 2006 autobiography One Train Later: A Memoir and a 1997 interview with Guitar World, claims that the guitar came from Eric Clapton, as part of a trade for which Clapton received Summers’ Les Paul.

In any case, the guitar had a Gibson PAF Humbucker in the neck and a standard Tele single-coil in the bridge. The guitar featured a built-in preamp controlled by a toggle, as well as a bridge swapped for a brass plate with individual saddles, and a toggle for phase switching. The bridge pickup is mounted directly to the body, not the bridge plate – the same way the bridge humbucker is mounted on Eddie Van Halen’s Frankenstrat.

In One Train Later, Summers writes, “When I start to play it, something stirs within me. I find that I can’t stop playing it; this guitar sparks something in me and I have to have it.”
The Tele was used on huge Police hits such as Roxanne, Message in a Bottle, Every Little Thing She Does is Magic, Every Breath You Take, and others. In 2007, Fender’s Custom Shop did a limited run of 250 replicas.