The life and times of Terry Reid, who turned down Led Zep and now records with Johnny Depp

The singer and guitarist looks back at his role at the heart of British pop music in the 60s and 70s – including touring with the Stones, witnessing Hendrix’s first UK gig and what really happened when he was asked to join Jimmy Page’s new band in 1968. 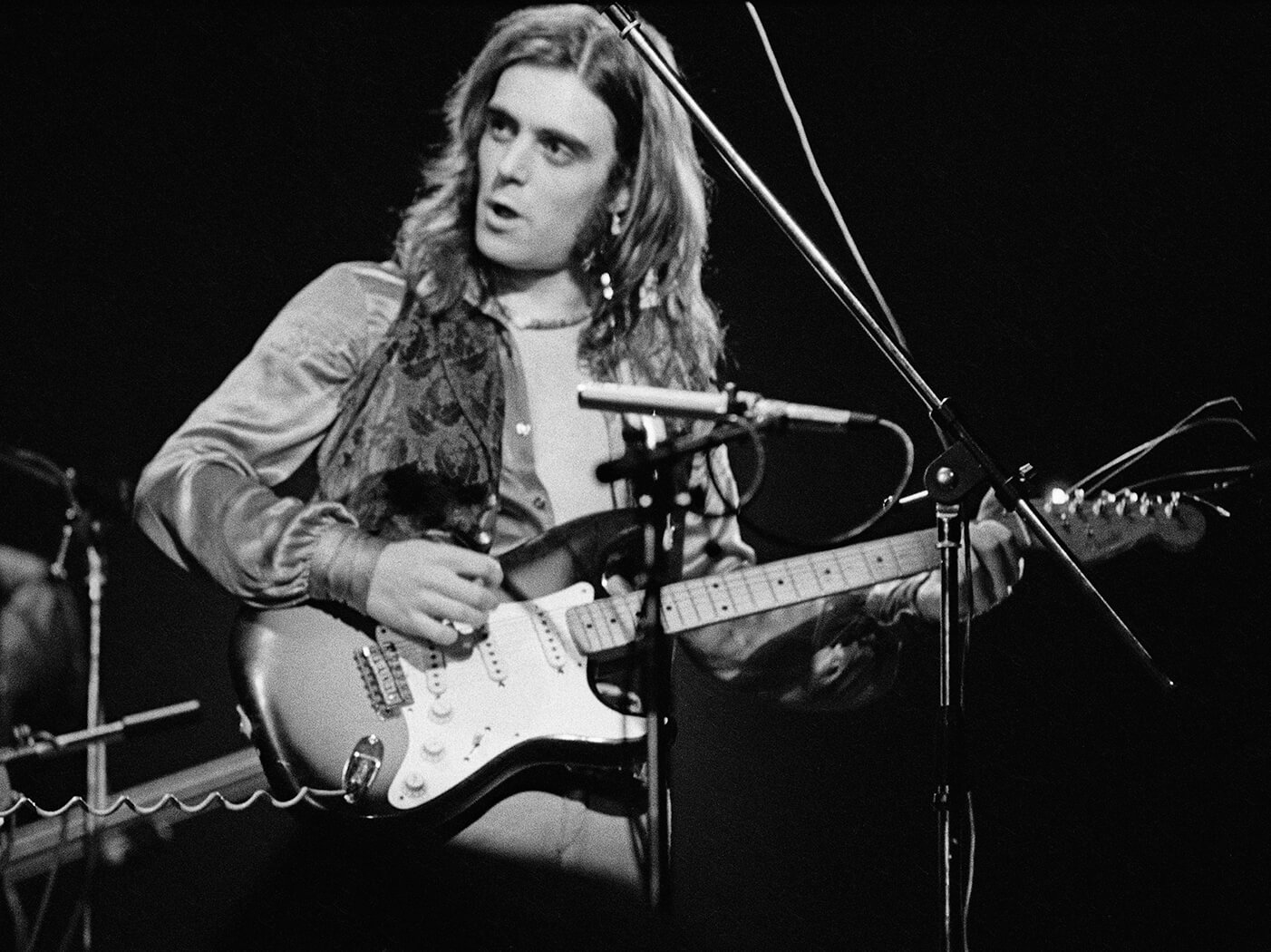 “I expect better things of you than to ask me a question like that. That’s wicked, man,” fumes Terry Reid, when asked if after all these years he ever lies in bed wondering what would have happened if he had accepted Jimmy Page’s offer to join a new band he was putting together… one that turned into one of the biggest in rock history.

“I don’t sit around going over old coals, ‘Oh, if only I’d have joined Led Zeppelin.’ I have a career. I can’t put up with bullshit.”

However, in the 50 years since, Reid has been asked the Zeppelin question many times, as well as being quizzed on why he turned down the chance to front Deep Purple. His frustration is understandable – after all, Terry Reid is regarded as one of the finest vocalists Britain has ever produced, and he’s got the all-star endorsement to back it up.

Just ask Aretha Franklin, who said this after seeing an 18-year-old Reid perform in 1968: “There are only three things happening in England. The Beatles, The Rolling Stones and Terry Reid.” Or ask his many rockstar fans, who include Mick Jagger, Jeff Beck, Graham Nash and Jack White, whose group The Raconteurs covered Rich Kid Blues.

Alongside his singing, we should also mention his formidable songwriting talent that has produced such highly esteemed albums as Seed Of Memory, Rogue Waves and The Driver – plus his fine guitar abilities, which have seen him do session work for the likes of Don Henley, Bonnie Raitt and Jackson Browne.

Reid’s also an avid guitar collector, with his most cherished instruments being a 1952 Gibson Les Paul Goldtop, Gretsch Black Falcon, a Stratocaster with custom Jimi Hendrix pickups from Seymour Duncan, a ’72 Martin D-45, a Gibson J-200 Custom and a Danelectro Baritone.

Several years ago, Reid sold his prized 1952 Telecaster, purchased in 1968, to his good friend Joe Bonamassa. “Joe is really passionate about guitars and loves the whole history of that guitar. It’s a one-of-a kind,” he explains. “I told him, ‘Don’t refinish it. It’s got blood on it from when I first got it, then I put some on it and it’s all dried in the finish!’ That’s what gives it character. I like the idea of Joe having it. He calls it ‘Terry’s Guitar’ and told me, ‘If you ever want to use it for anything, just call me,’ which is very nice of him.”

Born in Huntington on 13 November 1949 and raised in the small village of Holywell, by the age of 15, he was already opening for The Rolling Stones. Two years later, Reid was going out with Cream on their farewell tour.

He also released his debut album, Bang, Bang You’re Terry Reid, produced by the legendary Mickie Most who also played with The Animals, Herman’s Hermits, The Jeff Beck Group, Donovan and The Yardbirds.

However, a falling out with Most, who was also his co-manager, resulted in Reid’s being prevented from recording elsewhere for the next four years and the momentum was never recaptured, at least from a commercial perspective.

He’s carried on recording, however, with his most recent album being an expanded version of his 1973 cult classic, River called The Other Side Of The River, which came out in 2016. He still tours regularly and has been working with Joe Perry and Johnny Depp on a new album.

What was the moment it all started for you with guitar?

“When I was very young, my dad got me a cheap Höfner like the one Steve Marriott also started out with. He told me: ‘If you really learn how to play it and need a better one to get anywhere, I’ll get you a real guitar.’ I had seen George Harrison on TV playing a ’62 Gretsch Tennessean with The Beatles and I thought, ‘How do I get my dirty little hands on that!?’

“Luckily, there was paper called The Exchange And Mail, which advertised all different kinds of used stuff and, lo and behold, there was a guy selling a Gretsch Tennessean Cherry Red with a Vox AC30 amp. I went to London in the rain with my dad. He cracked a deal with the guy and that really got me going. I still have that guitar hanging at home on my rack.”

You were only 15 when you toured in support of The Rolling Stones – given the way crowds were back then, that must have been an experience…

“Oh yes, it was. I call it The Screamers Tour! It was just like it was for The Beatles – it was that era! I didn’t know women did things like that, it was terrible what it did to a 15-year-old boy! It’s one thing being on the outside watching it on TV and having a giggle, but being part of it was actually very dangerous, because the only security you had back then was just police and sometimes dogs!

“Say we had two or three thousand people at the theater, you’d have basically the same amount outside that couldn’t get in and just wanted to get a glimpse of the Stones coming in and out. As soon as they let everybody out, now you have four or five thousand wild fans, which was an absolute bloody mess. Getting out of the building was literally taking your life in your hands.”

How different was your experience on the 1969 tour, when the Stones returned after three years with Mick Taylor replacing Brian Jones?

“Well, for one thing, we now had proper sound systems and the concerts were obviously much longer. I’d known Mick Taylor a long time since his days with John Mayall and it was great seeing him with the Stones. When Brian was there, it was essentially a rhythm sort of band, a back and forth thing. When Mick joined, he took Keith’s place as the lead guitar player and became the real soloist.

“He and Keith were a great combination, being so different from each other. They worked off each other so well. It was fantastic. Really rough and ready. Musically, we never knew what they were going to do, and I don’t think they did either, especially with something like Midnight Rambler.”

You also crossed paths with Jimi Hendrix at this point, you must have some special memories of him…

“Chas Chandler, who used to be the bass player for The Animals, was now Jimi’s manager and producer. He had invited all of these people like Jeff Beck, Eric Clapton, Jimmy Page, Brian Jones… to this club in London, the Scotch of St James, to see his new protégé. It looked like the cover of Sgt. Pepper’s!

“So Jimi comes on, nervous as hell, gets up with the band and says: ‘I’d like to do this lovely little song. I know it’s one of your favourites, Wild Thing.’ After Jimi walked off, Brian runs over to my table and says: ‘Terry, you’ve got to move your table. There’s water all over the place where I’m sitting.’ I said, ‘What do you mean? What happened?!’ He said, ‘It’s terrible! There’s water everywhere from all those guitar players I’m sitting with who are crying!’ Brian was a real character.”

“Jimi scared the living shit out of everybody who saw him. See, all these English players thought they had it all sewn up until he came over, and now it was like, ‘Don’t be too sure of yourself.’ Looking back… where did Eric take things after that, where did Jeff Beck?

“I’ve always been the biggest Jeff Beck fan in the world. He’s an idol of mine, but if you didn’t have Jimi happening at that particular time… he was the one who just pushed everybody into doing something more musically than just playing blues licks.”

There are so many stories and legends about what happened when Jimmy Page asked you to join what became Led Zeppelin in 1968, what do you remember about what actually happened back then?

“The Yardbirds, which Jimmy had been a part of, had broken up. I was with the same management company with Peter Grant and Mickie Most, so I’d see Jimmy all the time at the office. We’d be discussing ideas for his new band.

“Now, Jimmy was already good friends with John Paul Jones, a very good bass player, who played on most of Donovan’s records. Jimmy and I were talking about my joining them, but at the time, I was already committed to going on tour with the Stones.

“So I told Jimmy: ‘When I come back, let’s give it a shot with this New Yardbirds thing of yours, and we’ll take it from there. Or you pay me what Keith Richards is paying me and you tell him that I’m not going on the tour!’

“Jimmy said: ‘I don’t have to.’ I said, ‘He might shoot you in the leg, but Jesus Christ, stand up and be a man. Don’t play like little boys!’ Sometimes rock ’n’ roll people act like little children.”

How did you first come across Robert Plant and John Bonham?

“I happened to see this band called Band Of Joy, which they were both in. Usually, a singer and a drummer play off each other. Everybody thinks it’s the guitar player and the singer, but that’s not true. It’s the drummer and the singer. I live for drummers. That’s what gets me going, and I could see that Plant and Bonham had a real thing going.

“So when I got back to London, I called Jimmy and Peter Grant, and said, ‘You’ve gotta try this,’ and the rest is history. I was chuffed to death when Led Zeppelin got that big. It was a great opportunity for Robert and John and I’m proud of putting the band together.”

You’ve made some great albums over the years, but you never seemed to get the sales or airplay that they perhaps deserved – why do you think that is?

“Well, you know, even back then, with record companies, it was always ‘flavour of the month’. Record companies can’t promote everyone on their label. Sometimes they’d promote this and not that and a lot of funny things would happen along the way. There are a lot of other performers, like my friend Frankie Miller, who is one of the best singers to ever come out of England, that has never been given his fair due.”

Do you still have the same love for performing that you did 50 years ago?

“I’m still hanging in there and people are telling me that I seem to be having a resurgence. I feel I’m singing better than ever, that I’ve finally honed in on being me. When people come out to see me, it’s very humbling to find out that they still have really good memories of my work after all this time.”