Waterparks: “Anything you can do to cross creative streams, the cooler your piece of art is going to be”

Frontman Awsten Knight on why he’d rather put effects on vocals instead of guitars, why he’d feel weird demoing his songs on anything other than the Strat he’s used since he was 16, and the colourful birth of new album, Greatest Hits. 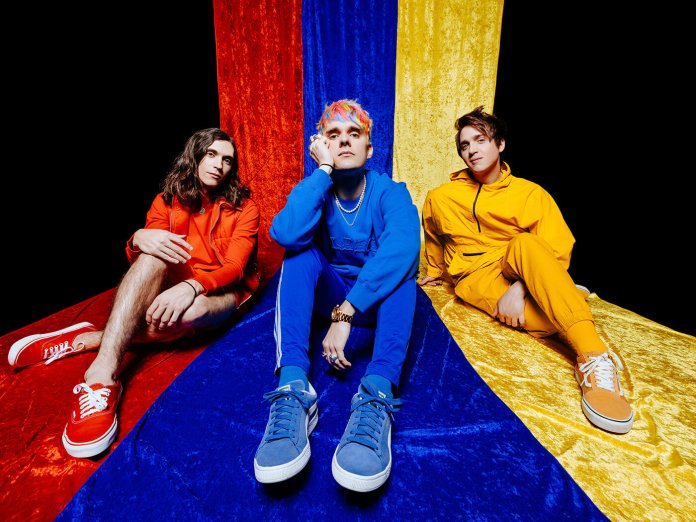 Just before leaving for a UK tour, Waterparks frontman Awsten Knight had a sudden, overwhelming urge to create. He booked two days of studio time with Zakk Cervini, who had produced his band’s third album FANDOM, and on his arrival, he covered the whole studio with silver reflective panelling. Nothing was left untouched, not even the sofas. He then bought three antique lamps, and placed in each of them a coloured lightbulb – one yellow, one blue, one an orangish-red (full on primary colours look “too clowny”, he explains). Each colour is intended to represent a member of the band, completed by guitarist Geoff Wigington and drummer Otto Wood. The first three full songs for the band’s fourth album Greatest Hits – The Secret Life Of Me, Crying Over It All and recent single Just Kidding were put to tape in this space – all with Awsten wearing yellow from head to toe.

If you’re thinking this all seems a little, well, odd then allow us to welcome you to the wonderful world of Awsten Knight’s process. It’s the creative manifestation of a man who happily admits to loving detail, scattering Easter eggs through Waterparks’ music videos that only make sense when the band reveals their next album campaign (the yellow, blue and orangish-red colour scheme of Greatest Hits was hinted at as far back as 2018). He’s loud and quirky and has a personality too big for his body to contain. He’s ambitious as hell  (he has “A million things” to cross off his bucket list) and some may even describe him as ‘extra’. He also admits to having a preoccupation with rituals, whether they’re about creating a rather unique elaborate space to make music in, or more about having a set routine.

This desire to do things a certain way is why Wright has used the same Fender Strat since he was 16 years old, covered in gluey blobs from where sticky stars used to be and duct tape on which he had written the phrase ‘Pop Star’.

“I was going through a huge Red Hot Chilli Peppers phase,” he says, “and I was like ‘John Frusciante has a guitar like this’. Every demo has been done on that guitar. It would feel weird getting a handful of other guitars [to make demos with].”

The same could be said about his Suhr guitar, another mainstay of Waterparks’ music, which has appeared on everything the band has made since the Cluster EP released in 2016 prior to debut album Double Dare. “I fucking love [that guitar],” Knight says. “I’ve used it on everything because the tone is just perfect. Sometimes for big rock choruses I layer in some Gibson. You can’t go wrong with a Gibson Les Paul.” 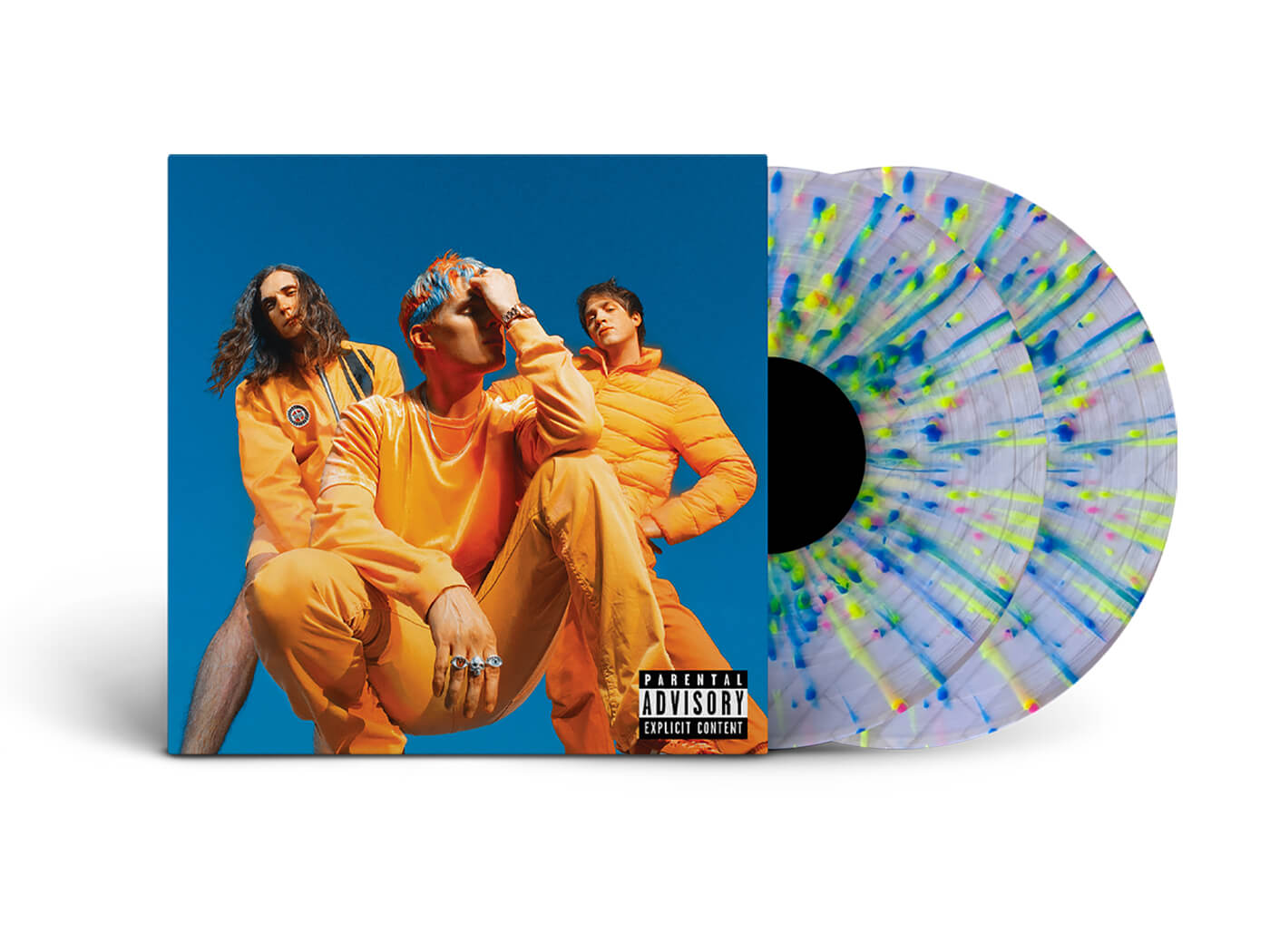 Knight says he doesn’t tend to use a lot of pedals, aside from a Cry Baby he bought because, in his words, “Audioslave is dope.” Instead, he prefers a different technical approach, namely taking vocal effects and running the guitar through them, or even vice versa by applying guitar distortions to vocal tracks. “Where you would normally play a guitar through your interface, I would just run the vocal through that,” he explains. “That’s why it sounds all crunchy and fuzzy and then you can pitch that around.”

Knight has used this technique constantly throughout Waterparks’ career, even as far back as the Cluster EP. Ultimately, it’s another way in which Waterparks can continually diversify themselves from the bands grouped within the same scene on them, and for Knight, the ability to do that is paramount. “It’s almost like [you should try to do] anything you can do to not have the same sounds as someone else,” he asserts. “If you can do enough things that separate you [from other artists] in the bigger picture, it’ll make a difference. I think anything you can do to cross creative and technical streams, the cooler your piece of art is going to be.” 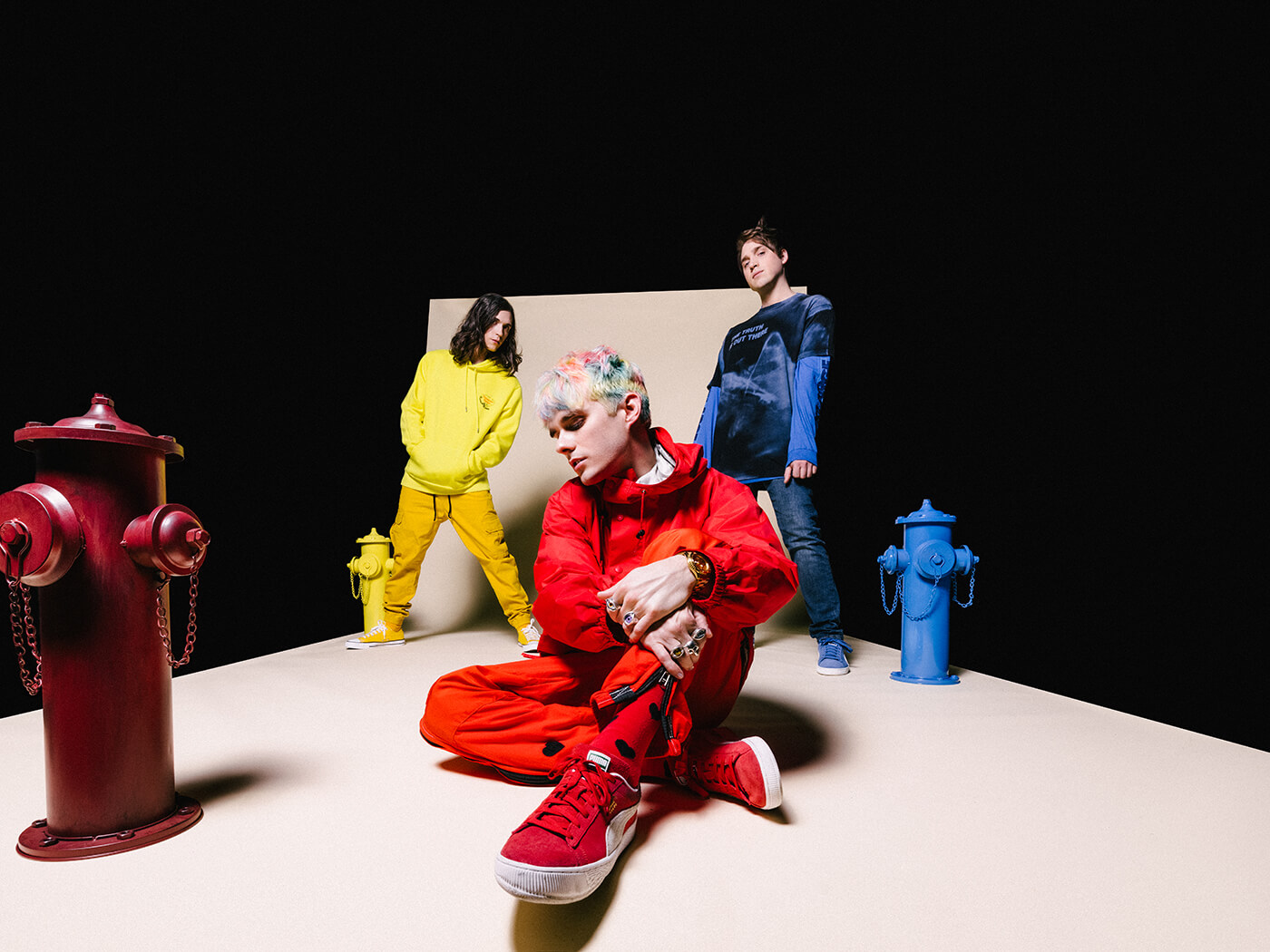 It seems timely, then, that Greatest Hits is the first Waterparks album on which Knight has a producer credit. Each consecutive record, he explains, has used more and more material from his original demos as his recording capabilities progressed – or rather, “as I get less bad at recording.” The pandemic pushed Knight to improve his skills even further as a matter of necessity, given that the studios were closed. “There was only one option,” he says. “Learn how to record better, figure your shit out, or you’re not going to have an album for a while.” Naturally, for a band who has released four albums in just under five years, waiting is a foreign language.

The sense of constance within Knight’s choices of gear and his recording techniques are somewhat remarkable considering the steady evolution of Waterparks’s sound since their beginnings in the middle of the 2010s. The aforementioned Double Dare is an ebullient, colourful record leaning on the rockier side of pop rock while 2018’s follow up Entertainment saw the Texan trio expanding their range from gritty post-hardcore to eerie dark pop.

2019’s FANDOM oscillated even more rapidly betweenthese two goalposts, occasionally veering off piste into realms with no genre whatsoever, and Greatest Hits does a similar thing, yet takes sharper turns to the effect of sounding occasionally rather bonkers (though that is by no means an insult). Although Knight once declared that “pop music is better than rock music” in an interview with a rock music magazine of all places, guitars and other more pop orientated sounds now have approximately equal airtime on Greatest Hits, neither seeking to overwhelm the other. 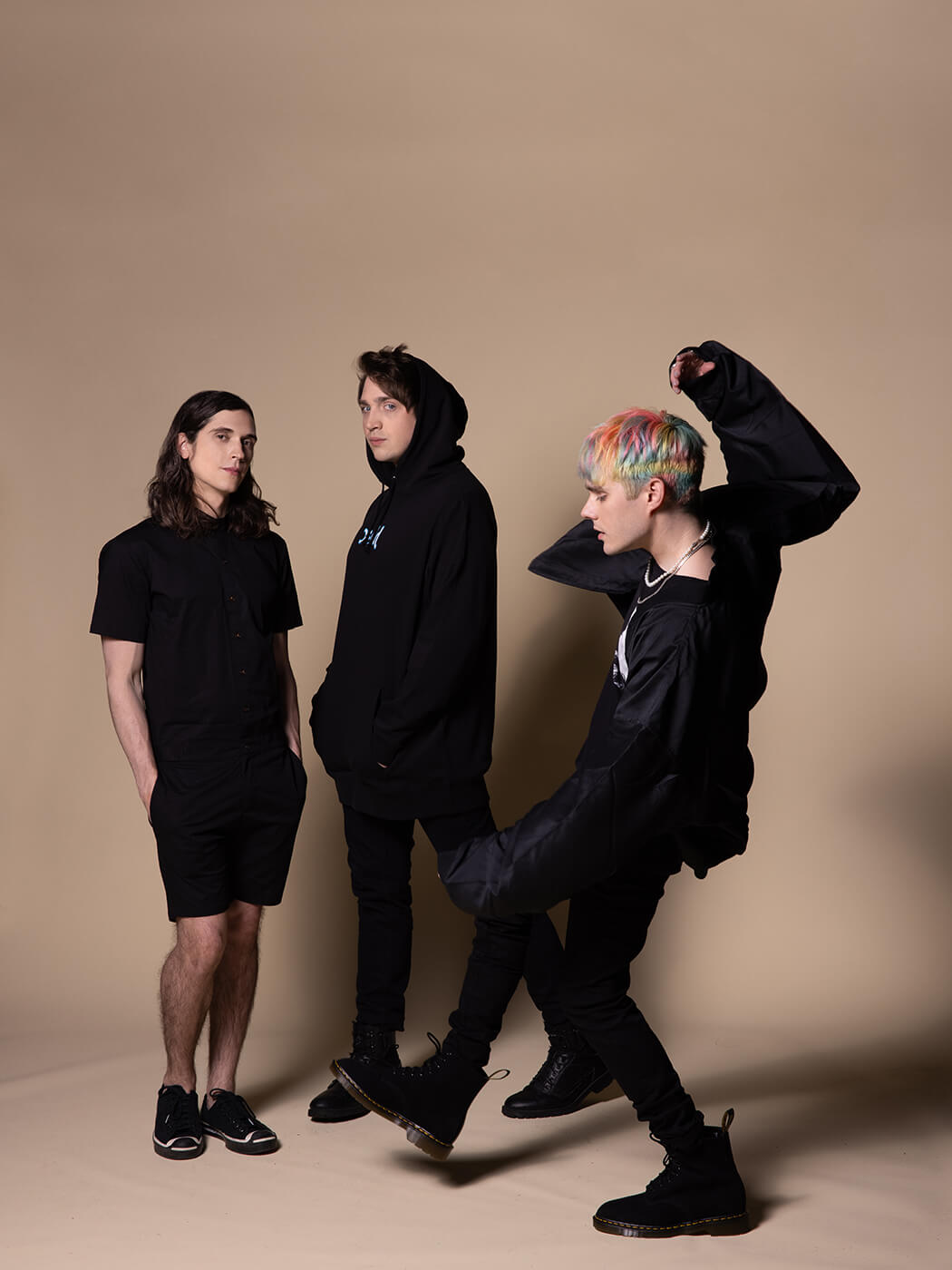 There is a similar constance in the role guitar plays in Waterparks’ songs, even when they’re making music that could sit snugly within the charts. When it comes to playing, and the place guitar holds within a song, Knight’s opinions are characteristically strong. All guitarists have their influences, but as well as those, he says he has what he calls ‘anti-influences’. “In like 2015 or 2016, we’d go to South By [South West] or Warped and I’d hear these bands that would technically be playing riffs but it just did not fucking matter. It wasn’t memorable. It was just going right over my head.”

The best riffs, Knight says, are the ones you can ‘sing’ to. You can try it, for example, with the introductions of Smoke on the Water or Seven Nation Army, and the same applies to the best drum fills, like Phil Collins’ In The Air Tonight. If it’s not doing that, it should add to the “feeling” of the song. At the very least, “it can’t be shredding for the sake of shredding,” explains Knight. “Otherwise it’s just guitar vomit. You have to be able to feel and understand what a guitar and really any instrument is doing for the song feeling wise, because that matters more than anything.”

Whether Waterparks is your favourite or your least favourite band, you can’t deny that Knight is anything but daring with his music, yet perhaps the most daring part of the Greatest Hits era isn’t even related to the sound of the record at all. After the end of the band’s one album deal with Hopeless Records, famed for looking after the music of New Found Glory, Sum 41 and The Wonder Years, Waterparks signed with 300 Entertainment. Not only does this make them labelmates with fellow Houston native Megan Thee Stallion, but they are the only rock band on a label more associated with rap.

“I loved [Hopeless],” says Knight. “But when that contract was up, I was like, ‘I don’t want to sign with [a label] where they have every alt band or any band that we could be paired with because I want to be set apart, though not completely, obviously. I wouldn’t want to be surrounded by ten bands in our world that are bigger than us, because then why would we be the priority at all? I feel like it might also cause people to go into our albums sort of semi more open minded.” 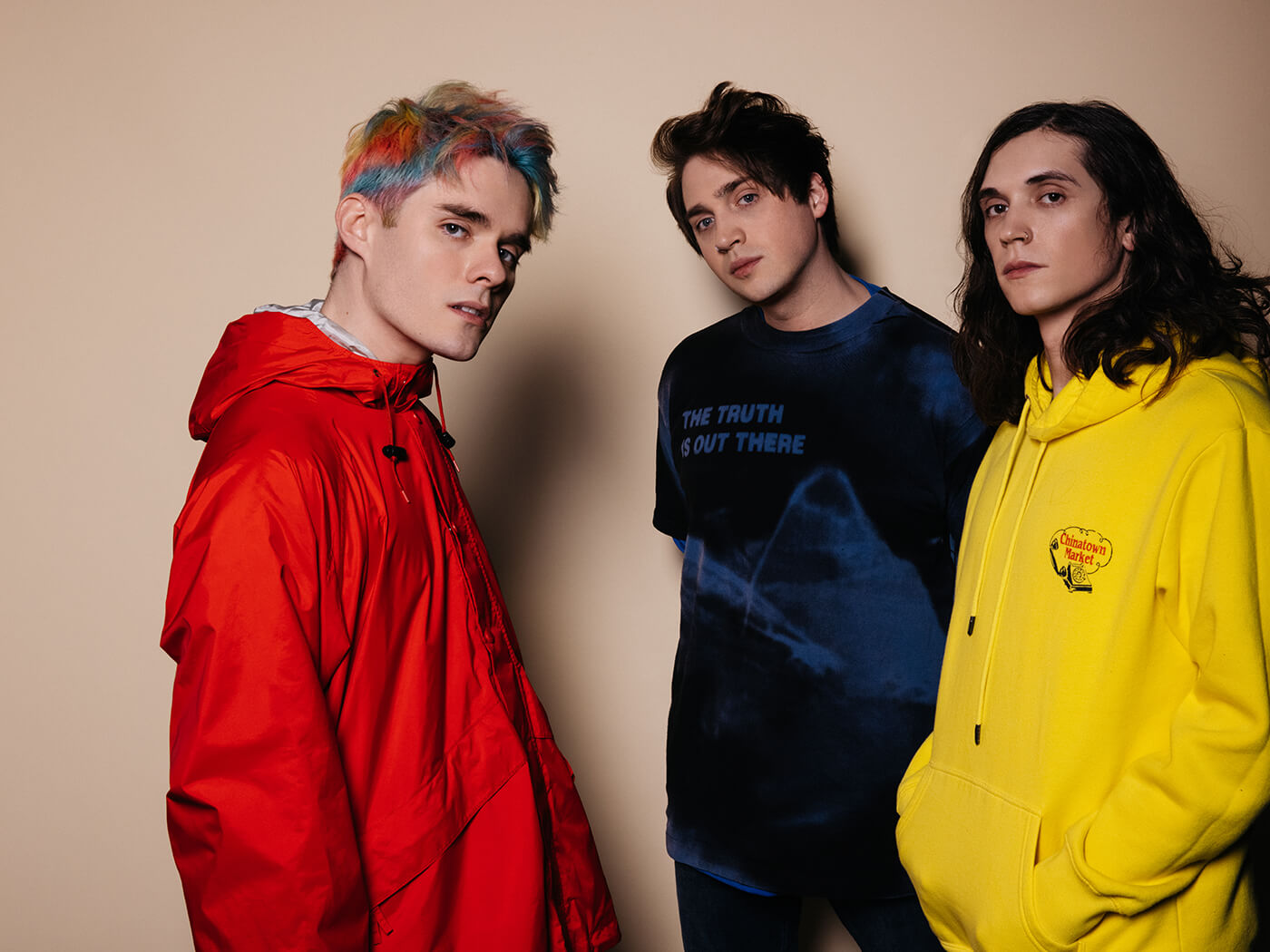 With this giving the opportunity for Waterparks’s music to reach people outside of the scene bubble, Knight hopes it may allow them to tick a few more things off their bucket lists – well, “a few” being more like 15 or 20. Knight has no problem admitting said bucket list is rather capacious. “There’s a million things I want. I want to play on late night [television]. I want a top 10 album. I want Greatest Hits to go fucking platinum. I want to get action figures made of us.”

Yet above, all, Knight hopes that Greatest Hits is “understood”. He accepts that it might not come straight away – it’s the equivalent of the band taking a paint palette and dousing the canvas with loud, clashing colours, and it’s perhaps the least immediate record in Waterparks’ discography. The more time is spent with it, however, the more fun there is to be had.

Greatest Hits is out now on 300 Entertainment.