“We had to address the fact that music should cost more money”: While She Sleeps are fighting the status quo with the power of community

In the music video for Sleeps Society, the lead single from While She Sleeps’ forthcoming album of the same name, the Sheffield metallers lay down a career-defining announcement. They’re leaning closely into a row of microphones while sitting across a boardroom table, awash in an endless spiral of camera flashes. “We want to be the voice for artists just like us all over the world,” asserts rhythm guitarist Mat Welsh. “And we are asking for you to join us.”

It’s a tense, yet equally compelling moment; less than 24 hours before the clip – which mimics an industry press junket – premiered, fans had been forewarned of this change to the band’s MO via a vague Twitter statement. What they didn’t know, however, is just how profoundly it would affect them.

“We had just agreed as a team that it’s never enough these days to make a loud enough bang,” lead guitarist Sean Long tells Guitar.com over a call, several months down the line. “We wanted to create something that has a story and some substance; something that people can get behind.”

Long is describing the mission statement of Sleeps Society, the vital, Patreon-powered platform that, like the aforementioned single, also shares its name with the metalcore band’s new record. Established after the current pandemic began to ravage their financial situation, the scheme directly offers fans “support benefits” in exchange for a monthly subscription fee, including exclusive merchandise, official guitar run throughs and previously unheard demos – a model that could guarantee While She Sleeps a future that they otherwise would have lost. 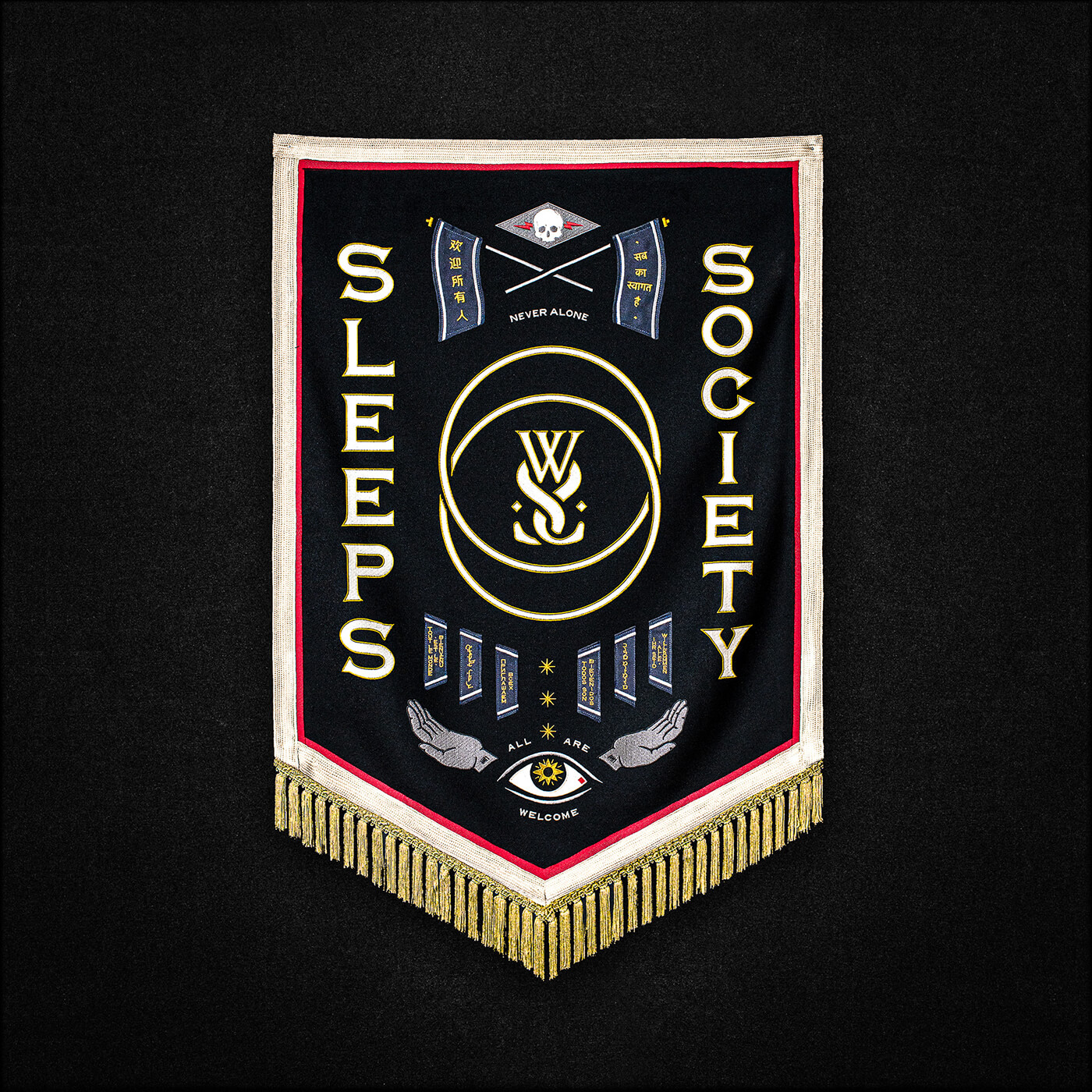 “We had to address the fact that music should cost more money – it’s a valuable human creation,” he continues. “But it’s like water now. It’s everywhere. It’s cheap as fuck and you can get it wherever you want. So, for that reason, it’s truly amazing that so many people, not just our fans, have joined us to keep us alive.”

Sleeps Society arrives as a game-changer of a fifth album, a coruscating portrait of a band in motion: alive, revitalised and roaring. It consistently delivers, and reigns in its thrilling fusion of riff-driven urgency, spat-out vocals, and genuinely heavy, evocative atmosphere. But crucially, Sleeps Society also serves as an act of reconciliation for While She Sleeps, who collectively underwent a tumultuous period of creative frustrations and internal problems while recording 2019’s So What?, the band’s fourth full-length effort.

Having formed as teenagers in 2006, the five-piece – comprised of guitarists Long and Welsh, plus lead vocalist Lawrence Taylor, bassist Aaran McKenzie, and drummer Adam Savage – tore down independent venues across the country as they came up through the late noughties’ new wave of British metalcore groups, alongside the likes of Bury Tomorrow, Bring Me The Horizon, and techy rockers Architects.

Their scrappy and bruising early EPs And This Is Just the Start (2006), Split (2009), and The North Stands for Nothing (2010) showcased a band capable of stirring up scream-along heavy metal choruses for many a festival crowd, but one that was also defiant enough to lean on elements of punk, post-hardcore and filthy emo with a similar level of snarling intensity – a pattern that permeated their 2012 debut LP This Is The Six and the three albums that followed.

“As a band, we’ve always felt like we’re just little shitty punks; I think we just don’t like being told what to do,” laughs Long. “But every album that we have made has been a time capsule of whatever we were collectively going through while recording it. That’s just the way it is – and always will be.”

It’s that rare and peculiar thing: visceral metalcore that proudly wears the heart on its sleeve. The previously mentioned So What? – the first album that While She Sleeps self-released through their own label, Sleeps Brothers – stands as a distillation of the multiple traumas that the members were experiencing at the time: frontman Taylor was struggling with the recovery from his throat surgery; Long was going through a difficult breakup. Deeply affecting tracks such as Back Of My Mind and Good Grief managed to cut straight to the core of the mental health issues that Long – who suffers from severe forms of anxiety and depression, and is also the band’s primary songwriter – was also struggling with.

Back from the edge

Unsurprisingly, then, the protracted journey to recording follow-up Sleeps Society was, at times, a never-ending whirlwind – and one that challenged While She Sleeps to pull the band back from the edge for the sake of themselves, and more importantly, for the fans.

“Things have previously been very unstable for us as individuals – it has been fucking hard for us all at certain points. However, we came through and made the music,” Long says. “But this time around, I feel like we’re just While She Sleeps on form. Everyone’s health is in a good place; everything has been going well. You’re gonna have the ups and downs as a band – but you can’t let life pass you by.”

For their fifth LP, there was a collective realisation that in order to move forward, While She Sleeps had to start afresh. The band found some much-needed joy by seeking out new sonic revelations in unexpected areas – “It’s very rare that we get inspired by music in our scene, as it’s very diluted” – and incorporating brighter, bolder sounds into their palette.

The racing title track – the first song that Long wrote for the record – develops into a metal hybrid as synth elements are thrown in, a flourish which he confirms was inspired by the unlikely influence of experimental alt-folk group Bon Iver. Elsewhere, Nervous an “unbelievably important” collaboration with the band’s long-time friend, Biffy Clyro’s Simon Neil, is turbo-charged by electronic undercurrents.

But Call Of The Void is this album’s true resounding triumph: it’s here where the significance of the Sleeps Society subscription model transcends into a stirring ode to searching for eternal optimism. The track cements the unshakable relationship that While She Sleeps have with their fans; some 200 members of the initiative were given the opportunity to contribute to the recording process, as they offered their voices to the song. It’s a real life-affirming number – and a clear, meaningful example of why this band’s music resonates so deeply with so many.

“When we come together collectively, as mates, we create something unique, just like any other band does,” Long explains. “But the fans find something special in our music to really connect with; I can spot a young Sleeps fan a mile away, because they look just like a smaller version of me – they’re like mirrors of us.”

He adds: “The entire concept of this thing is to give the fans the respect that they are due, rather than just saying it. I’m really for wearing it all on our chest and showing them that they’re really the ones keeping us here,” Long concludes. “If the fans are happy with Sleeps Society, then what else could we possibly want?”

Sleeps Society is out now via Sleeps Brother.