This month: the head-spinning world of rotating speaker cabinets explained. 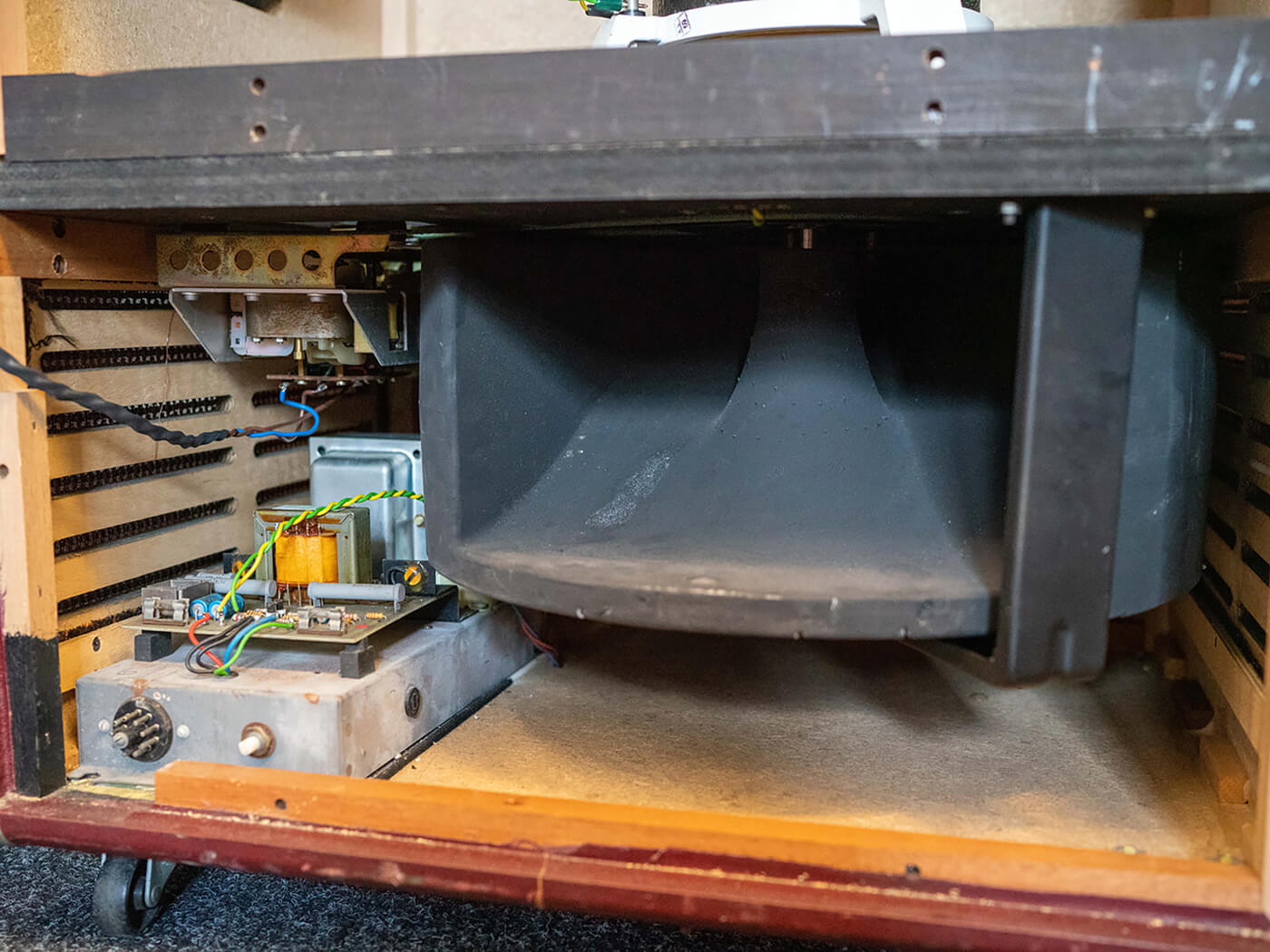 Removing the Sonorous 601’s rear panel reveals both the rotating drum and the onboard solid-state amplifier. All images: Chris Fantana

Adrian asks: Hi Chris, can you explain what a Leslie cabinet is? I’ve been offered one for sale but I’m not sure if I can use it with my guitar amplifier.

Chris Fantana: Hi Adrian, The Leslie speaker is a separate amplifier and loudspeaker unit that is named after its inventor, Donald Leslie. In the late 1930s, he started work on a device that would better give him the sound of a pipe organ than his current setup. The story goes that whilst working as a radio service engineer in LA, he bought a Hammond organ from his then place of employment, Barker Brothers department store. He hoped that it would be a suitable substitute for a pipe organ but upon setting it up at his home, he quickly realised that it didn’t quite hit the mark. Being an engineer, he started development on a speaker cabinet that would give him the sound he was looking for.

After going through various prototypes, he discovered that he needed to make a moving speaker to emulate the spatially varied sound of a pipe organ, which is a result of the different locations of each pipe. His solution to this was unique and innovative, in that rather than rotating the speaker itself he decided to fix it in position and then have a rotating drum below that would send the sound waves out at different positions as it spun.

The basic design hasn’t changed much since then. The cabinet contained both an amplifier to which you’d connect your organ, and also a two-speed motor that was used to set the rotational speed of the drum. The speed variations were referred to by the monikers ‘chorale’ and ‘tremolo’.

A customer of mine recently purchased a Boosey & Hawkes Sonorous 601 Leslie copy. He asked me to covert the unit for use with his 1970s Fender Super Reverb, as a plug-and-play solution.

Aside from the aesthetics, the fundamental design is remarkably similar to that of an original Leslie. Removing the lower rear panel reveals a solid-state amplifier on the lower left of the cabinet, and the huge rotating polystyrene drum painted black. Behind the upper panel is the Altec 12-inch speaker, and through a small cutout, you can see the speed motor.

For our conversion for passive guitar use, we must first remove the amplifier unit from the cabinet. We’ll be connecting directly to the speaker, so the amplifier is now redundant. Two screws hold it in place and after desoldering the connecting wires, we can remove it gently while taking care to not damage the drum. Once it’s out of the way we can then remove the speaker, motor, and drum as a whole unit.

Interestingly, it is not a single motor that drives the drum but two separate units that engage the drive mechanism. They are both powered by 240v AC and one or the other would be selected by a footswitch connected to the amplifier unit. One unit spins the drum at twice the speed of the other, and that’s how the two effect speeds are controlled.

For our conversion, running 240v mains voltage down a footswitch cable is an absolute no-no, so without major modification to the motor unit and designing a clever switching unit, we’ll have to keep everything onboard. After running through the options with the customer, we decide to omit a footswitch entirely and have the two-speeds selectable by a toggle switch on the rear of the cabinet.

A new lower rear panel is cut from 9mm MDF and then painted black to match the original look. I fit a combined IEC/Fuse/Power switch unit and also our separate ‘speed’ switch, before wiring it up and connecting to the speed motor. A quick test proves that it works and crucially, it’s safe to operate.

I add a Marshall-style speaker socket to the upper panel and connect that directly to the Altec speaker, exactly how it would be wired in a normal 1×12” cabinet. Leslie-style cabinets also have tweeter horns to separate the upper frequencies from the lower. In this application, I’ve disconnected them but kept the wiring loom in place in case we decide to add them back in at a later point.

Now, time to reassemble and have a listen. I connect a Rift PR18 directly to the cabinet and with the motor turned off, it sounds just like a regular cab. The bottom-end is perhaps a smidge overpowering but a quick tweak of the bass control balances everything out. With the speed motor turned on and the speed switch set to chorale (slow), the drum starts to rotate and we’re treated to that classic Leslie feel that you only get with a real rotating drum.

The sound is being bounced around the room and the reflections cause some very pleasing phasing issues. This ‘in the room’ 3D effect is not something I’ve truly heard in a pedal before – the laws of physics don’t allow it!

Switching over to tremolo (fast), the effect is not only faster but also more intense. You get a huge, powerful sound and it’s no wonder that Donald Leslie spent years chasing it down. It’s just wonderful.

The great thing about this cabinet is that my customer can run it in parallel with the internal speakers in the Super Reverb too, so he can retain more of the original tone if he wants.

So there we go, the Leslie cabinet explained. Yours might require some modification to work with your guitar amplifier, but boy is it worth it.