Guitar Recording FAQ: The pros and cons of recording with effects

In these days of gargantuan pedalboards, the idea of recording without effects seems unthinkable – but some engineers would still argue otherwise. 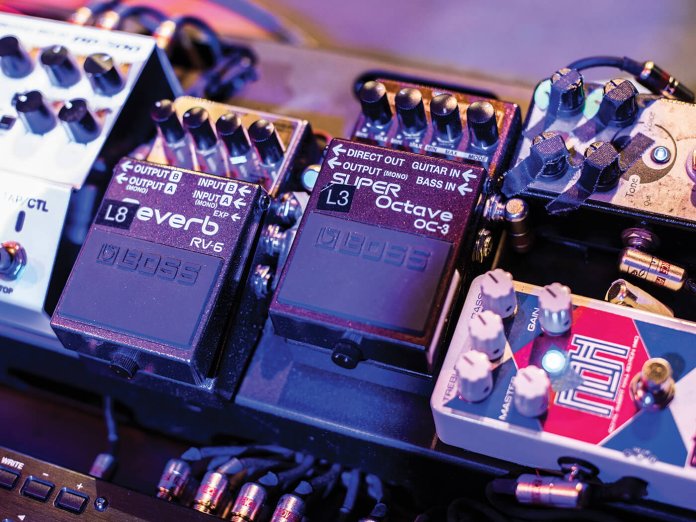 Is it ok to use effects when I’m recording or should I put them on afterwards?

Hi Jo, great question. In short, an old-school engineer would say no, a studio guitarist might say yes and if you ask an engineer who also plays guitar, they’ll probably say that it depends on a number of factors.

Live sound engineers frequently insist you turn your amp down to the point where it’s barely audible. It’s predicated on the notion that absolutely everything has to go through the PA system so the golden-eared engineer our there can have ‘total control’ of the mix.

Recording engineers should take a more nuanced and sympathetic approach because making you sound good makes them look good. But rather than make you turn down your volume, they’re more likely to ask you to turn down your effects. Again, it’s about control, but here there are more valid reasons because the studio process involves recording and mixing. When something is committed to tape or hard disk, it’s recorded forever.

That’s why engineers tend to be mindful of the mix when they’re recording. Effects applied to your guitar during the recording cannot be removed if they later turn out to be detrimental to the sonic balance and overall production.

Many formally trained studio engineers learned early on that guitarists should be discouraged from using effects and some will also insist that guitars are recorded in acoustically dry environments with a view to adding ambience later. It’s not ideal because amps tend to sound better in acoustically complimentary environments. Many of us carefully craft our guitar tones using a variety of stompbox or stand-alone effects. It contributes to the sonic identities of our bands and some effects are integral to what we’re playing – we’re often playing the effect as much as we are the instrument.

In addition, an engineer might try and make you turn off your effects but they rarely have any qualms about adding their own. But professional studio sessions are infrequent events for most of us these days, and we’re more likely to record alone or with a bunch of mates. If you’re wearing both hats, so to speak, you need a clear understanding of the pros and cons of recording effects. So, let’s break them down into categories.

Remember your amp or modeller has tone controls. If it needs to sound brighter or less bassy through the monitors, try adjusting your amp before switching on that preamp or desk equaliser.

We recommend adding a high pass filter – aka bass roll-off – to any electric or acoustic guitar when you’re tracking. There’s nothing of value below 75Hz and if you’re not recording in a soundproofed environment, low frequency garbage can really build up.

If you do feel the need to shape the sound, try to make any adjustments minor. Studio equalisers can be used to remove problem frequencies as well as boost them. We suggest leaving radical tone shaping and frequency boosts until mixing.

Stronger compression can also be used to create sustain effects and enhance punchiness or presence. Our advice is to feel free to add light to medium amounts of compression but avoid extreme compression when recording.

A sound can be compressed during recording and mixing. If you give yourself some leeway, you’ll find it very useful for getting parts to sit in a mix. If you have a compressor pedal that is part of your tone and helps you to play, go ahead and use it. Stompbox compression on the way in and studio compression on the way out is perfectly valid.

Studio engineers tend to like their delays clean and guitarists usually like them dirty. That’s why we persist with tape, disk and bucket brigade echos, and myriad digital models thereof. And if you’re used to a particular delay sound and response, it’s hard to play without it. Imagine Brian Setzer trying to make do without his Space Echo or a producer telling The Edge he’ll add some delay later on in the mix.

The main thing to be careful with is long delay times. Ideally the echoes will match the tempo of the track but most modern devices have a tap tempo function. If a part needs echo, or your whole playing style is based on it, then go ahead and record the effect. On the other hand, if you’re overdubbing a solo and you think it might sound good with delay but you’re not quite sure, leave the decision until mix time.

This is contentious because amp and studio reverb effects can sound radically different. Studio reverb can simulate everything from tiny tiled rooms to cathedrals and concert halls, but nothing beats the swampy splash of springs with added valve grit.

If you only use amp reverb subtly to create a sense of space, we’d suggest recording without it and using a reverb plug in during the mix. But if reverb is integral to your tone and affects the way you play, you should record with it. If in doubt, back it off a touch and add more in the mix/

Traditional amp tremolo and vibrato can sound incredible, but pedals have closed the gap in recent years and both tend to sound more authentic than plugins. But for flanging, chorus and phasing, plugins can be your best bet and they provide far more control.

Again, we’d say go for it if you like the sound you’re getting, but don’t get carried away – especially with those wow and flutter simulators in some of the analogue echo modellers. Remember subtle modulation can be very effective without necessarily dominating a mix.

In conclusion, there are no rules and you should follow your instincts. We can learn a lot by making mistakes and if you have to go back and re-record, that’s ok. But if you’re in doubt, always record a clean DI tone simultaneously. That way you will be able to run the sound back through an amp or amp model and re-balance the effects whenever you need to.