If you’re uncompromising about your acoustic-guitar tone and construction, check out these dozen models that we consider the best in class.

There are many good reasons to splash out on an acoustic – especially if you’re a professional musician. Whether it’s playability, intonation, comfort, reliability or good ol’ tone, these 12 models represent the best acoustic guitars we’ve reviewed on Guitar.com. They don’t come cheap, but for the quality of materials, construction and sound you’re getting, these dozen can’t be beaten.

In an ideal world, when it comes to that big acoustic number, a singer-songwriter will reach for their pre-war D-45. Time to rip out that country-fried solo when the band come in? No problem, the guitar tech is waiting stage-side with a vintage Blackguard Telecaster. The reality, of course, usually involves a considerable amount of compromise on the dream scenario we’ve just outlined.

That’s where the Acoustasonic Telecaster comes in. One of the most impressive things about Fender’s electric-acoustic hybrid is that, despite its problem-solving capabilities, it doesn’t feel like a compromise. Instead, it’s an instantly likeable, inspiring tool that opens rather than closes doors. It offers a broad range of acoustic characters based on popular tonewood combinations and body shapes, and has the ability to sweep through a blend of two voices in each position. There’s a lot going on with this guitar.

Taylor announced its V-Class bracing system in 2018, and it immediately wowed players with its effect on sustain, projection and intonation. The Builder’s Edition K14ce was one of the first Taylor V-Class models: a bright but sweet, full, deep and extremely loud acoustic guitar, and, at the time of our review, the finest six-string Taylor we’d ever played. 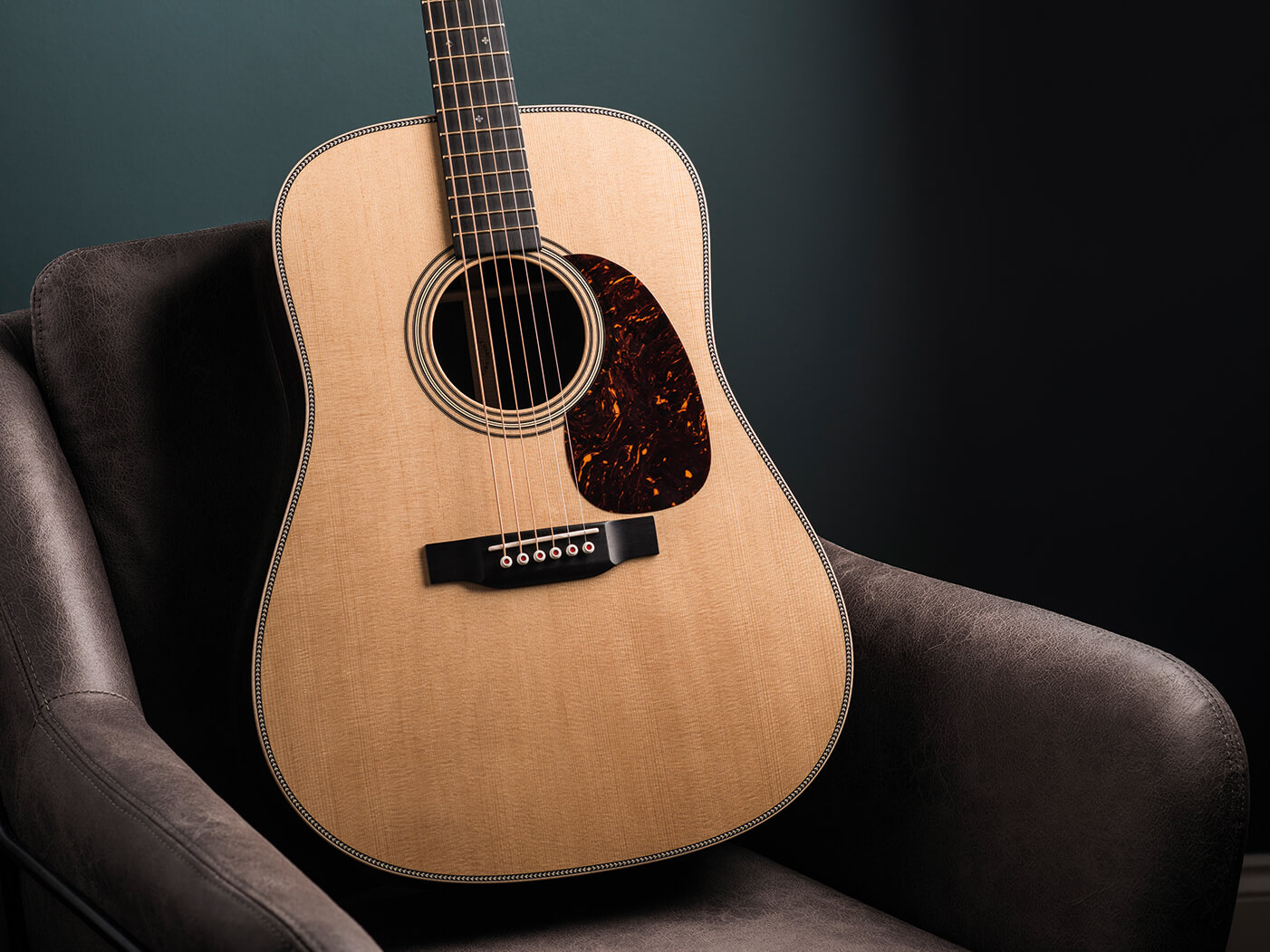 Although the Modern Deluxe edition of the evergreen D-28 dreadnought is packed with modern features and innovations, Martin isn’t exactly flaunting them. At first glance, this guitar looks much like any other high-end D-28, and its special attributes only become apparent on much closer examination.

In short, this D-28 is a top-drawer dreadnought that’s both contemporary and timeless. Martin has managed to bolster the mids and even out the string-to-string response – in a way that seems quite in vogue – without losing what we like about the company’s traditional dreadnought sonic signature. It’s not excessively bright, the bass is effectively de-boomed without sacrificing power and the sustain is remarkable. 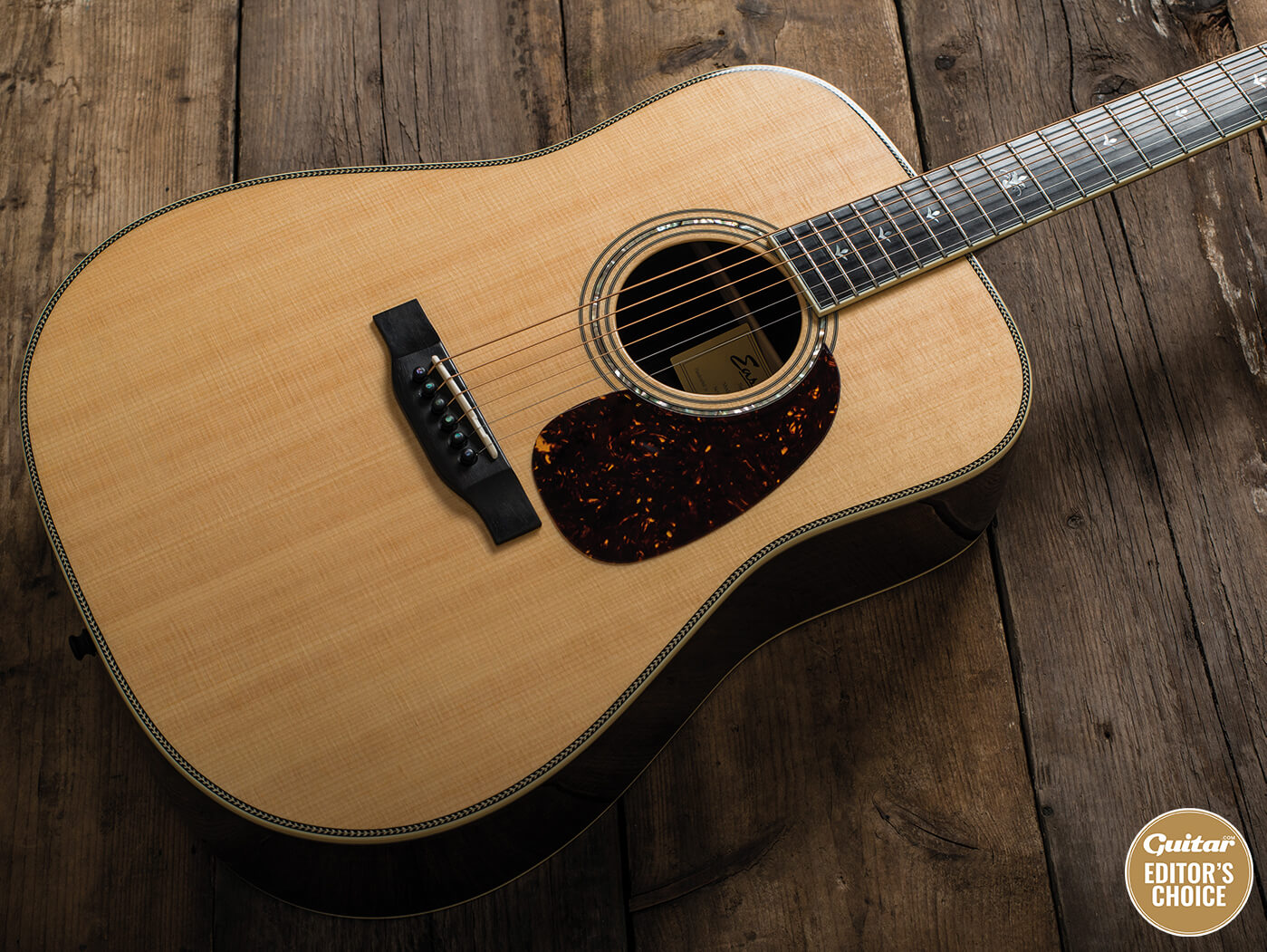 Although the models in Eastman’s new Double Top series may look like traditional flat-top steel-string acoustics, there’s something different going on under the surface. The DT30D’s soundboard is a three-layer construction, but it’s certainly not plywood. Instead, we have two very thin layers of Sitka spruce sandwiching a Nomex ‘honeycomb’ core. The idea is to achieve a far higher strength-to-weight ratio than is possible with a single spruce layer.

Tone-wise, the DT30D is no ‘boom and bust’ dreadnought with heavily scooped mids, thumping bass and percussive treble. Instead, we hear something smoother, far more balanced and, dare we say, refined. While the DT30D may not be the most exuberant dreadnought from a ‘strictly rhythm’ perspective, its tonal and dynamic characteristics make it far better suited to fingerpicking than most guitars of its type. That’s where the DT30D demonstrates its optimal focus, clarity and touch response. 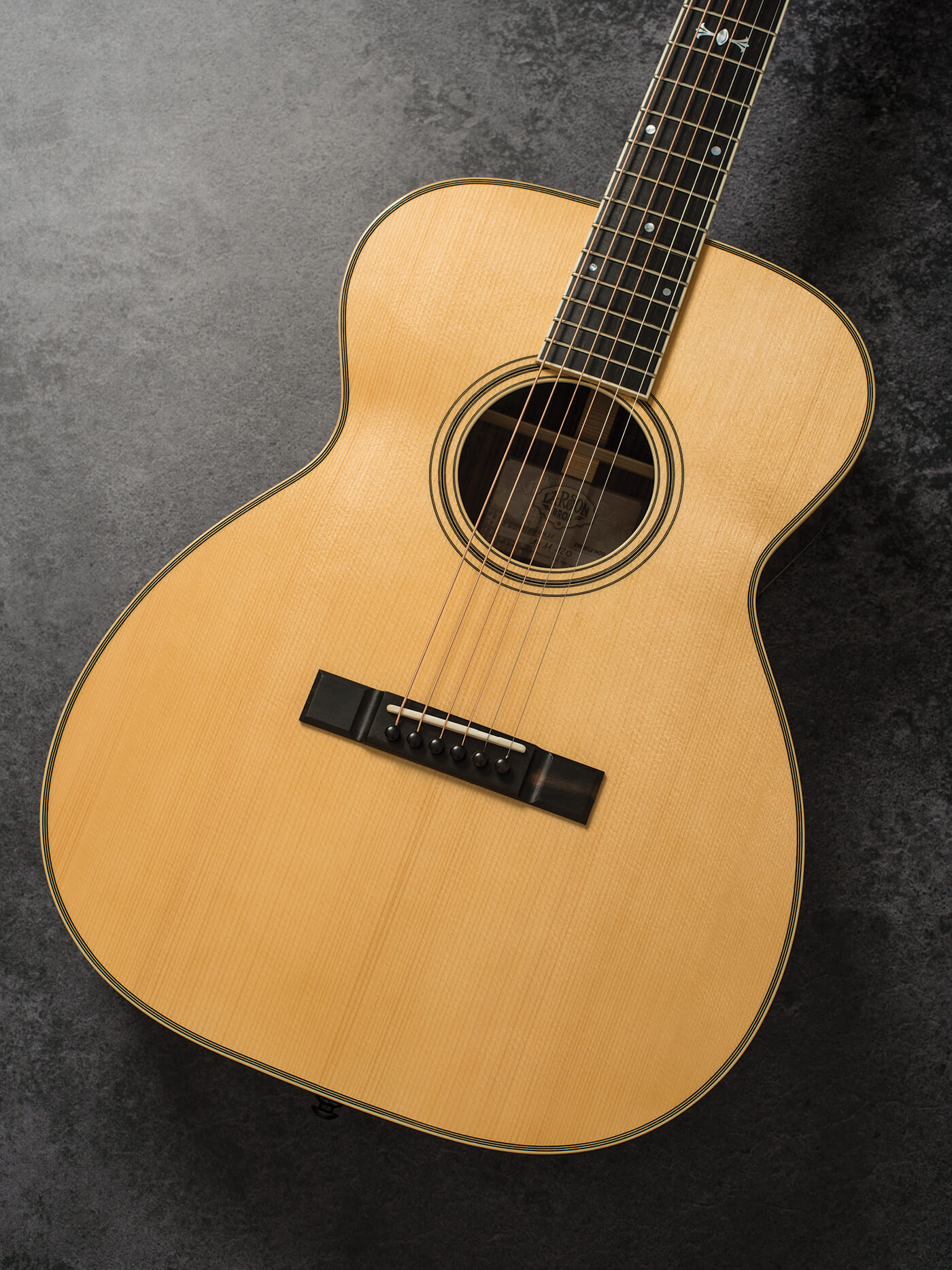 Although never a household name such as Martin or Gibson, Larson Bros can point to some celebrities on its client list, and its guitars are highly sought after among players and collectors today.

The Prarie State is one of them. It’s a truly inspiring instrument with authentic vintage tonality, tremendous volume, power and bass response. To our ears, it has a more robust and richer quality, especially in the lows and midrange, which support and fill out the extended treble. The upper frequencies are just about the sweetest we have heard from a brand-new spruce/rosewood acoustic. 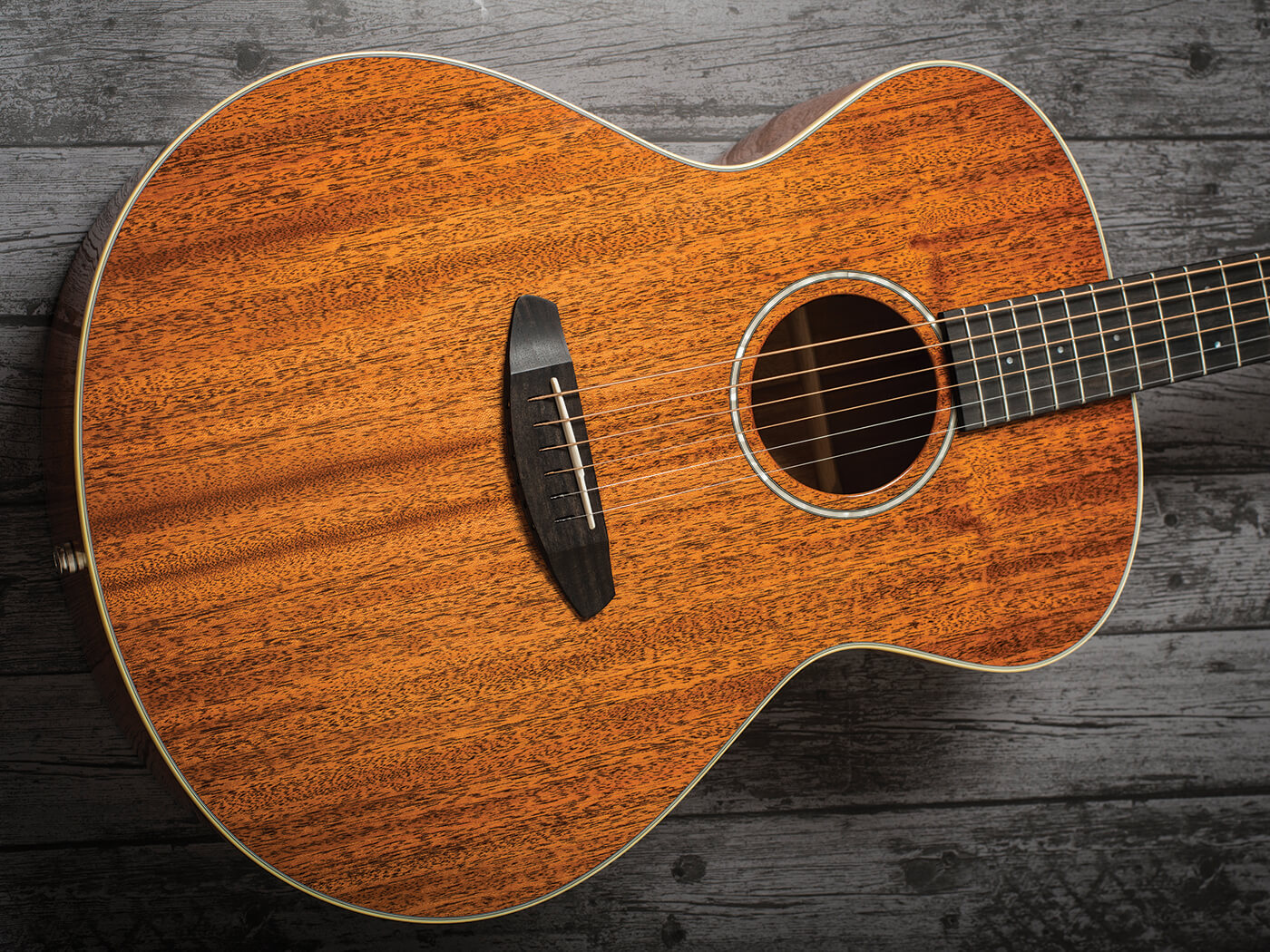 In devising its original Concerto shape, Breedlove challenged itself to better the tonal performance of a dreadnought, but with a more comfortable body design. In reality, the Concerto is something of a cross between a jumbo, dreadnought and OM – all in all, a hugely impressive and individual take on the dreadnought formula that offers superb tone and playability.

The Concerto E’s tonal performance matches up to its flawless construction. Starting with some basic fingerstyle, what’s striking is the Concerto’s bottom end. From deep within the bowels of the guitar comes a full-bodied, earthy rumble that never breaks up no matter how hard it’s pushed. The midrange is plump, rounded and full of textures, while the higher registers sing out with a clear, glassy ring that encourages refined and ‘less-is-more’ playing. 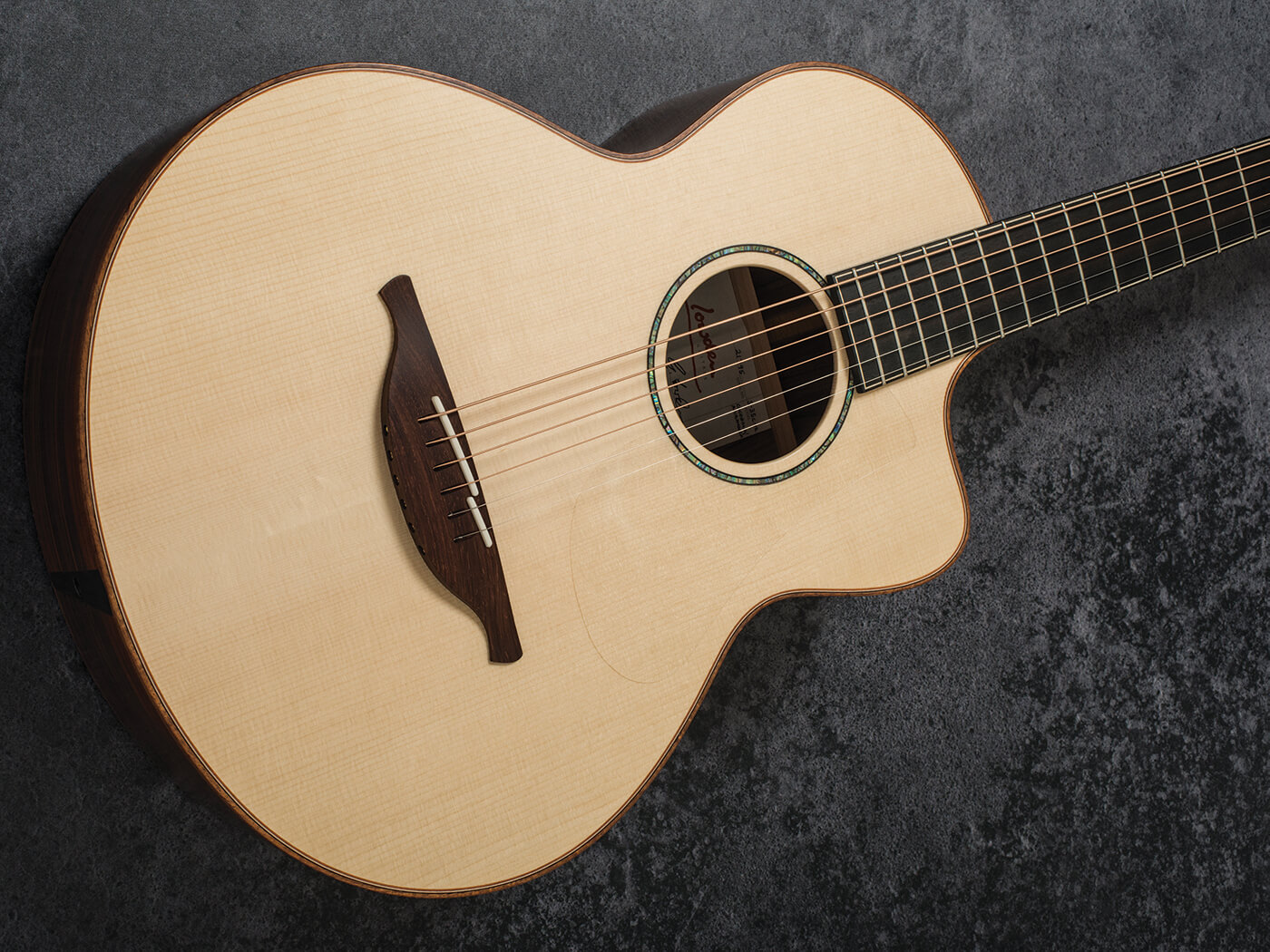 With its classic open C Lowden neck profiles, perfect setup and absolutely flawless build quality, this cutaway cocobolo/Adirondack spruce acoustic is one of the more comfortable guitars we’ve laid our hands on. Even electric players will find the lowered string tension from the shortened scale length familiar.

Start playing it, however, and you’ll hear a brighter Lowden tone with unfeasibly deep bass for the body size. The fast response and enhanced clarity help strummed parts to cut through, but the S-35C does demand a greater degree of accuracy when you’re fingerpicking. The tone is certainly more complex and harmonics linger inside the cocobolo body much like the finest rosewood guitars. In fact, it also achieves extraordinary sustain that puts them right up there with the V-Class Taylors. 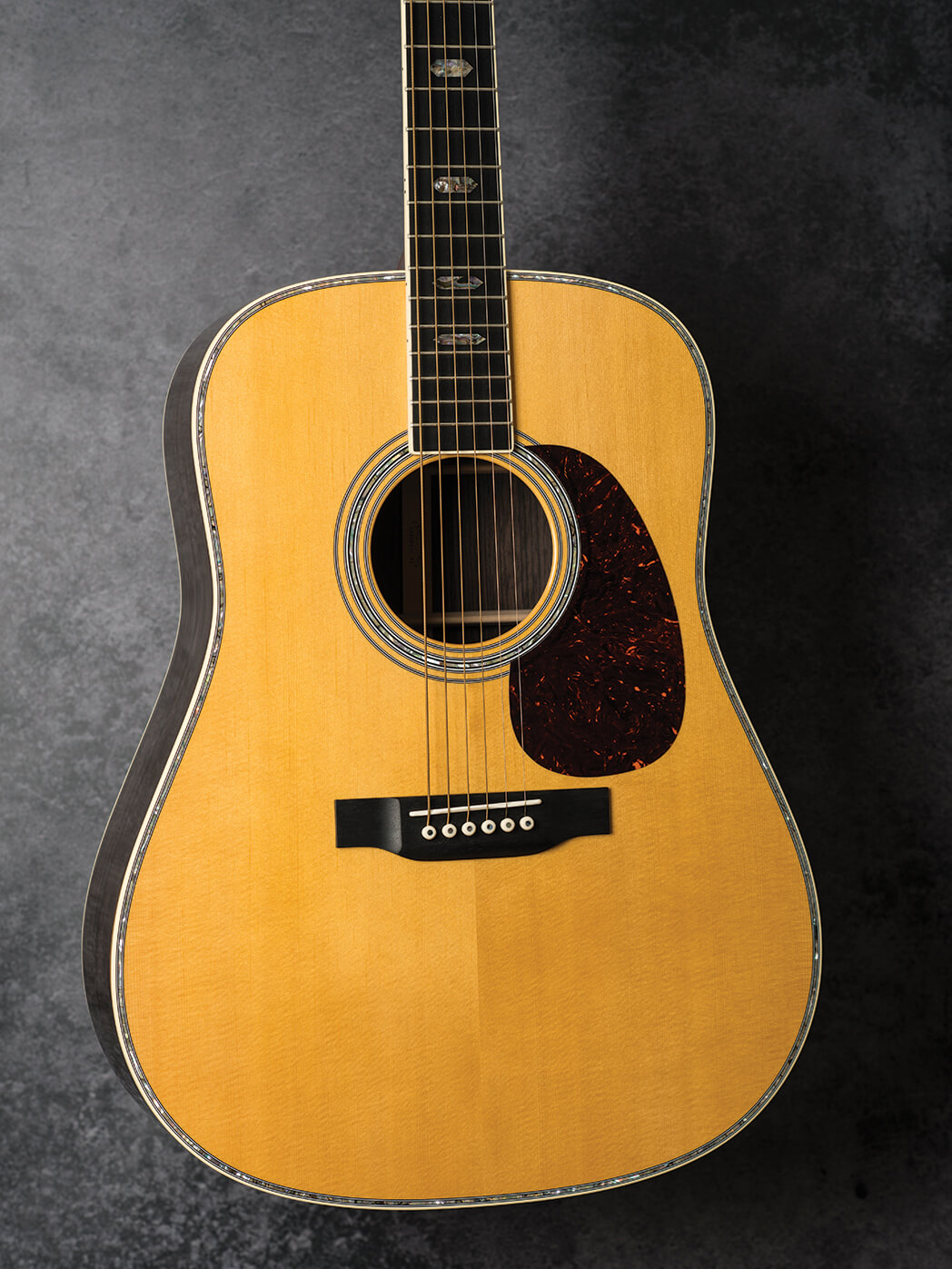 This 2018 D-41 can be read as Martin’s statement to prove to the guitar-buying public – and the competition – that no one does ‘Martin-style instruments’ as well as it can. From the high-quality materials used to the sublime tone and response, this D-41 is a terrific example of the dreadnought design that’s also a viable option for players of all styles.

We find it hard to put the truly inspiring guitar down. While it commands a thought-provoking price tag, it’s worth pointing out that we have not encountered a dreadnought sound of this quality outside of either vintage Martins or specialist Martin-style luthiers such as Lynn Dudenbostel or Wayne Henderson. And when you consider how these alternatives would command a five-figure price tag, the D-41 looks far more reasonable. 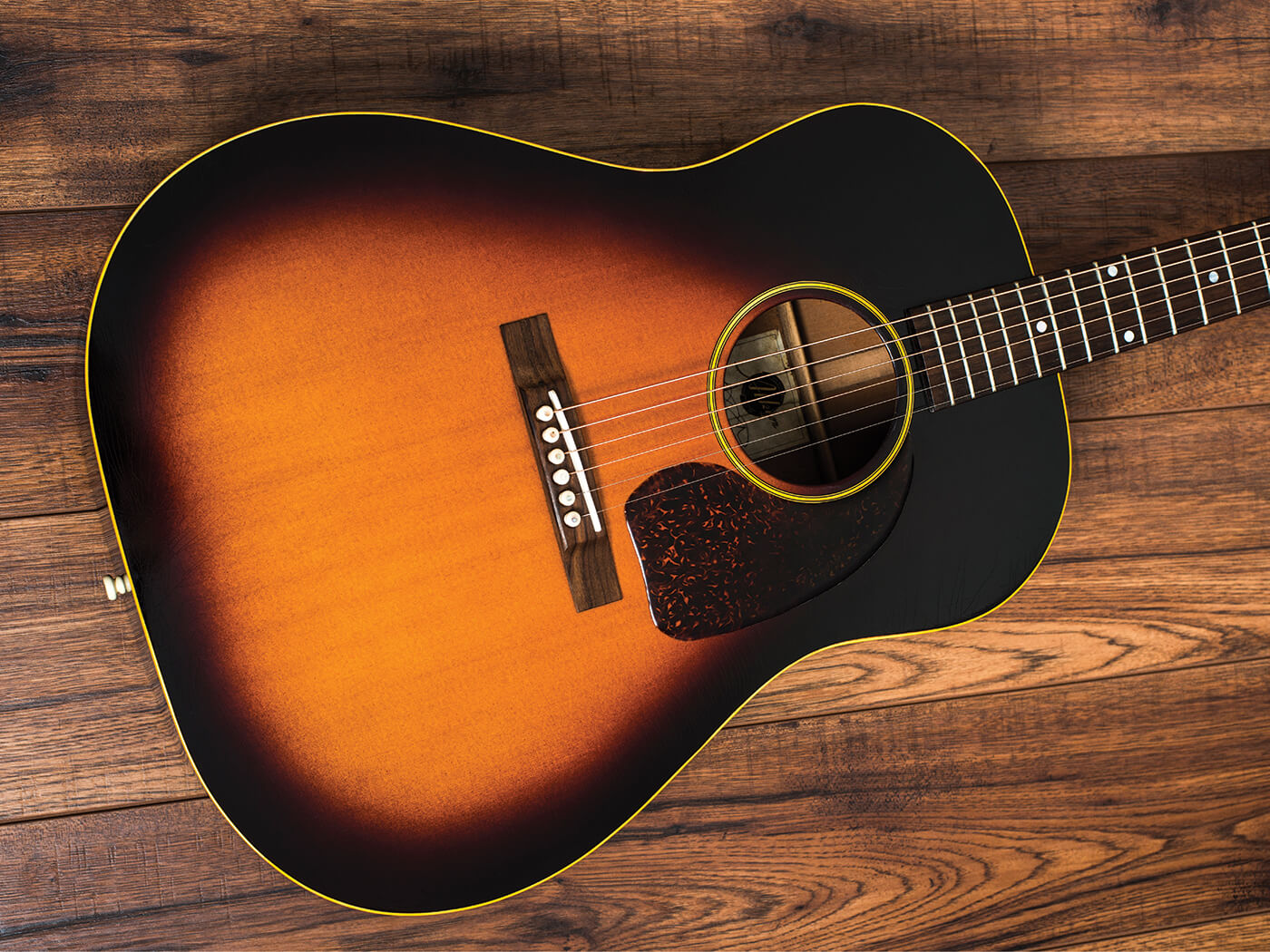 Artificially aged guitars have become commonplace in the electric market in the last two decades, but the opposite is true for acoustics. So rather than content himself with a straight-ahead vintage Gibson J-45 clone, luthier Alister Atkin aimed “to capture the aura of a guitar that has been played for the last 70 years”.

The result is a guitar with a more ‘vintage’ voicing, yet more stable structure. Atkin is no slave to the vintage aesthetic, because he incorporates a two-way truss rod and uses a two-bolt method for neck joints that’s similar to that used by Collings. And although it’s a slope-shouldered dreadnought, the bass is powerful but well proportioned and far from boomy. It has an enjoyable punchiness, but there’s a woody and rounded quality to the notes rather than a cutting front end or a twangy bite. 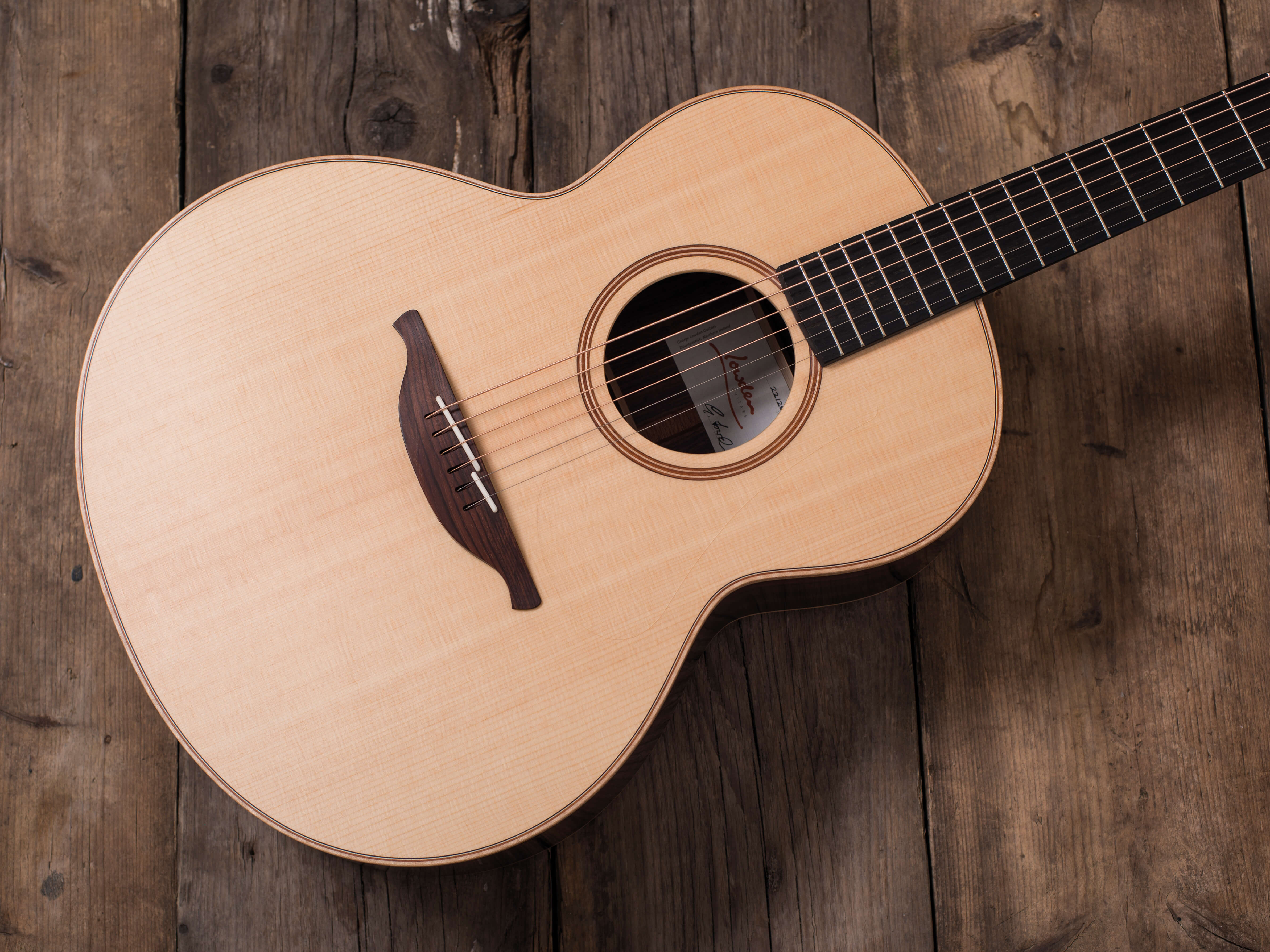 If you’ve always liked the vibe of Lowden’s O-shape acoustics, but are looking for a more compact instrument, an F model may just prove to be the perfect fit. Lowden describes the F models as small jumbos – and the F32 sits at the top of the range.

The body dimensions allow for a more even frequency response, so flat-bias bracing ensures no frequency band is unduly dominant or weak. In terms of frequency range and definition, the F32 compares to certain classic acoustics in much the same way high-end hi-fi systems compare to computer monitors with an added subwoofer. The phrase ‘harp-like’ seems more apt than ‘piano-like’. The F32 has a mysterious and ambient quality, and its tone is drenched in harmonics that linger on inside the body like a tuned natural reverb. 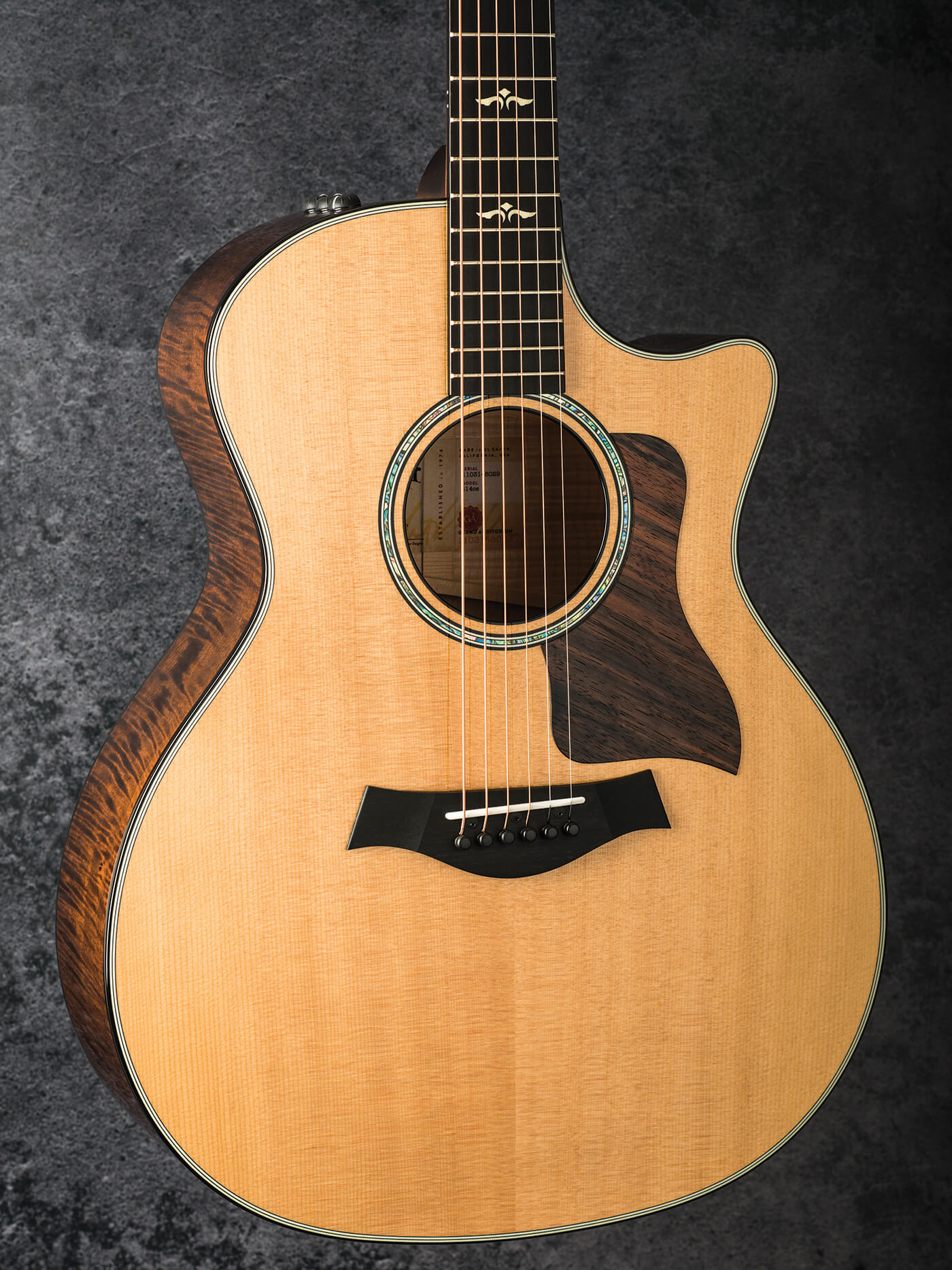 It’s the stage guitar of choice for many professionals, and the 2018 V-Class version of the Taylor 614ce further proves that there are few instruments out there that match this level of electro-acoustic performance.

This guitar has everything you’d expect from a Taylor. Besides a more open sonic palette afforded by the new V-Class bracing system, you’ll hear shimmering highs (smoothed off no doubt by the torrefied top), scooped mids and a workable, but never overpowering, bass end. Open tunings sound detailed and rich, and there is good balance along the whole fretboard. As you’d expect, playability and intonation are excellent throughout.

This guitar is based on one of the most iconic dreadnoughts of all: Clarence White’s 1935 Martin D-28. Bourgeois has replicated the widened soundhole and fretboard overhang of White’s guitar, the former of which is considered in bluegrass circles to be a vital element in the country rocker’s tone.

However, the D-Custom is not for the faint of heart. The action is set high for the strings to ring loud and clear, and you need strong fingers to play high up the neck. Tone-wise, it’s a muscular and loud dreadnought whose full-frequency experience has none of the loose, woofy bass that detracts from some dreadnoughts. You also get a crisply defined attack to single notes and robust low-end thump from strummed chords.