How to build a basic Fuzz Face clone from scratch and turn it into a ‘boutique’ version with precision biasing, transistor switching and more. 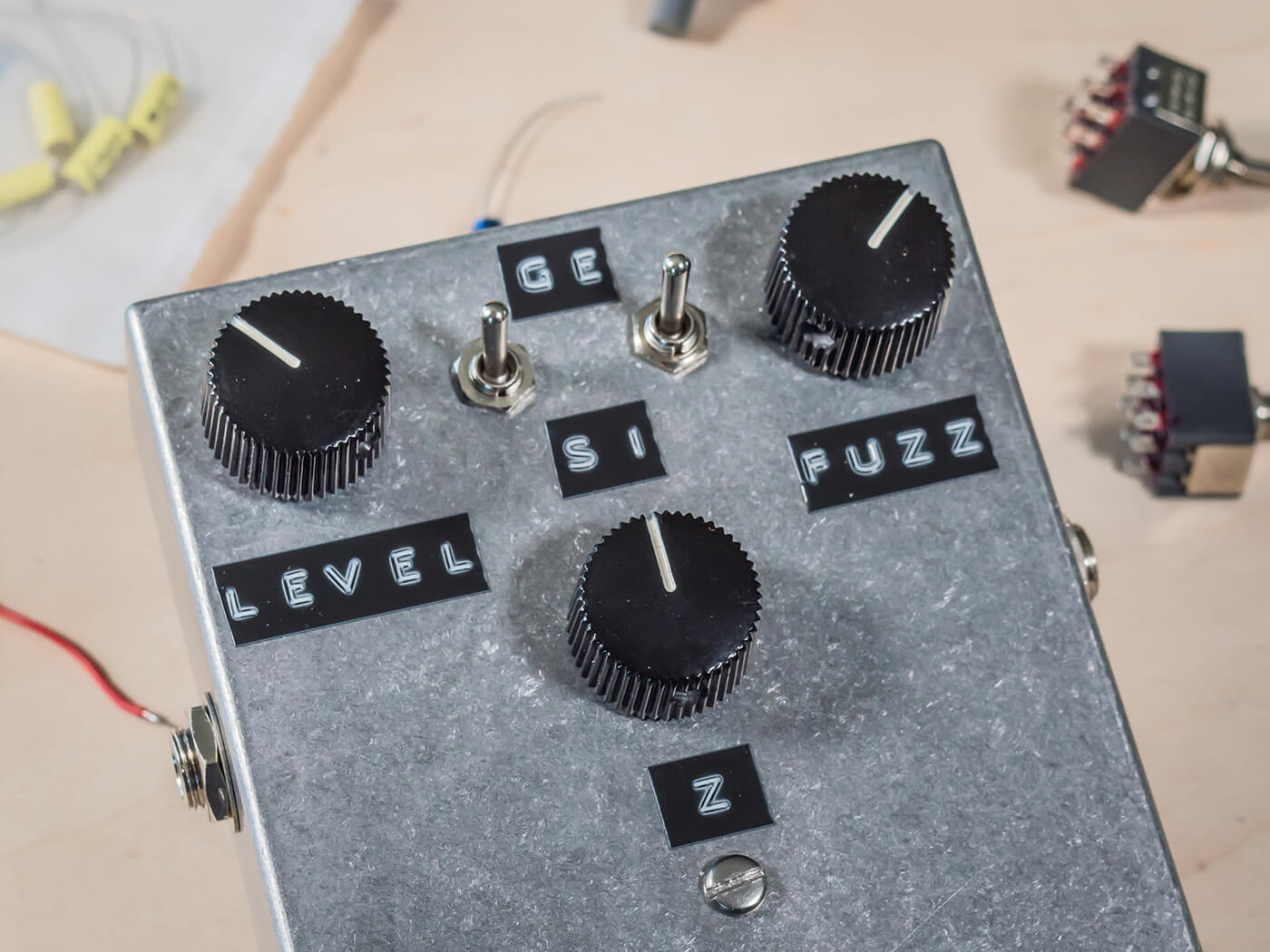 There are plenty of pedal kits out there, but something as simple as a vintage style fuzzbox can be built from scratch, allowing you to learn more about the circuit and make modifications to optimise tone and versatility along the way. Fuzz Face lore is awash with snake oil and there are units that sound mediocre and even pretty terrible as well as those mythical ‘golden’ examples that sound incredible.

Happily, knowledgeable replica builders have had decades to analyse this relatively simple circuit and develop a clear understanding of the variables that distinguish the best from all the rest. Many have kindly shared their findings, effectively demystifying the Fuzz Face in the process.

Here I’m showing you how to build a basic Fuzz Face from scratch and exploring how to make the circuit sound exactly as you want it. I’ll also be building a more advanced version with switchable transistors and some other boutique tweaks.

Let’s first distinguish between the two Fuzz Face eras. Arbiter Electronics Ltd began making Fuzz Faces in 1966 using NKT275 PNP germanium transistors. NKT275s can sound wonderful, but their sonic quality is notoriously inconsistent and their performance varies depending on ambient temperature. Arbiter merged with Dallas Electronics Ltd around 1968, and by the end of that year, Fuzz Faces were being made with NPN silicon transistors.

PNP stands for positive/negative/positive, and NPN stands for negative/positive/negative. Without wishing to get too far into the world of transistor manufacturing, they all have a ‘sandwich’ type construction. The middle (base) layer of PNP transistors is negative and the outer layers (emitter and collector) are positive. In NPN transistors, the polarity is reversed; the base being positive, and the emitter and collector both negative.

Sonic differences between germanium and silicon aside, this is important. PNP Fuzz Face circuits are not compatible with power supplies running a line of modern pedals because the positive is grounded rather than the now-conventional negative. PSUs with electronically isolated outputs may work, but it’s not ideal, and many vintage and vintage-style Fuzz Face owners resign themselves to using batteries. To keep things straightforward, I’m starting with a NPN silicon transistor Fuzz Face that can be powered using a standard supply.

If you think the price of old-stock tubes borders on the insane, try researching vintage transistors. This is especially true of ‘holy grail’ transistors that were used in classic treble boost, wah and fuzz pedals. My advice is not to get too drawn into all that and be wary of buying expensive NOS transistors without guarantees from the seller that they aren’t leaky and have adequate gain.

NPN silicon resistors used in Fuzz Faces include BC108C, BC109B, BC109C, BC183L and BC209C. You can find these online from components suppliers such as rapidonline.com and cricklewoodelectronics.com – in fact, you can probably get all the parts for this project from either of these outlets.

For a thorough analysis of the germanium and silicon Fuzz Face circuits, visit this site – there’s also some down-to-earth advice on transistors and a very simple little circuit for testing transistors for leakage and gain. I use it to test my transistor stock and find that some are leaky. This isn’t unusual and the leaky ones shouldn’t be used. Fortunately, I do find a few that don’t leak and I write the gain rating of each on the side of the casing.

It’s easy to find printed circuit boards for PNP and NPN Fuzz Face circuits, but you don’t really need one. This is such a simple build that it’s easy to assemble on tag strip, or even make your own eyelet or turret board.

I begin by drawing a circuit layout that only requires a small board and eight drilled holes. You can use fibreboard or glass epoxy board – the stuff with copper on one side is fine, but you’ll have to first remove the copper layer by soaking the board in PCB etchant solution. If you’re a fan of DIY relic’ing, you may already have etchant solution (ferric chloride) because it can be used to artificially age nickel-plated guitar parts.

After cutting the board then marking out the hole locations and drilling them with a 2mm drill bit, the components are mounted and the leadout wires folded back to secure them in position for soldering. I make all the solder joints at the rear of the board, then snip off the excess wire. It’s not the most elegant way to build, but the circuit is effectively wired point-to-point and it’s very easy to do.

Just ensure you have the transistor wires connected the right way. The base wire will always be in the centre and the emitter wire may be marked by a little tag on the case. Refer to the wiring diagrams provided and look up your chosen transistors online to confirm the connections.

My metal enclosure is drilled for control pots, jack sockets and on/off switch. I also use a 15mm nylon stand-off and two screws to mount the board onto the enclosure. The input capacitor is connected between the board and the input jack, and the output capacitor connects the board output to the volume control.

There’s a 20uF capacitor too, which I solder across the wiper and ground connections of the fuzz control. All the switch connections are made and a battery clip is installed with the positive soldered to the junction of the 33K and 470R resistors and the negative to the ring tag of the input jack.

If you follow the diagram carefully and make strong solder joints, your fuzzbox should work first time. Congratulations on a job well done, but does it sound good? If it does, you’ve been lucky and your work here is done. If it doesn’t? It’s almost certainly bad luck rather than bad building.

Mine sounds distinctly average. There’s not much sustain and notes eventually cut out rather than fade evenly, so it’s just like many vintage Fuzz Faces and some of the boutique clones. It should sound much better and I’m going to do something about it.

Accepting that some Fuzz Faces are somehow ‘magic’ while others sound mediocre is fuzzy logic. No decent amp-builder will simply throw in a pair of power tubes and hope for the best. Instead they’ll check voltages and measure bias settings to ensure they’re operating as required. They may even adjust the bias, within safe parameters, to achieve specific overdrive characteristics, enhance clean headroom or optimise dynamic response.

Transistors are no different in that regard, and those ‘magic’ Fuzz Faces are the ones with transistors that just happened to be non-leaky and biased up perfectly with the stock resistors. The folks at Arbiter did not carefully select transistors and bias them by ear, and that’s why they varied so much.

Instead of the 33K and 8K2 resistors, I put in a couple of 20K trim pots. Solder the wiper to one of the outer legs and it becomes a variable resistor that can be preset to the specified value if you have a multimeter.

Electrosmash.com/fuzz-face is another great Fuzz Face resource. You’ll find all the recommended voltages at all the important locations in the circuit, but don’t be too concerned about matching them in your pedal. The best way to set up any Fuzz Face is to use your ears. Adjust one trim pot at a time while you’re playing to hear how the sound changes.

At one extreme you hear ferocious fuzz with little or no sustain and a gating effect. I prefer to set mine for a smooth tone with long and even decay. It’s also worth turning your guitar down a notch or two to hear how the bias settings work for those rolled-back cleaner Hendrix tones.

This bit is fun because if you listen carefully and take your time, you should be able to turn an average fuzzbox into a fantastic one. After all the tweaking, it might be enough for you, but there are some interesting additional mods to consider too.

Though he’s been embroiled in controversy of late, Mike Fuller of Fulltone came up with some effective tweaks for his takes on the Fuzz Face. My favourite is a 50K potentiometer wired as a variable resistor between the input socket and the 2.2uF input capacitor.

According to guitar electronics guru RG Keen, it “raises the apparent source impedance of the pickup”. The electronic explanation gets a bit complicated, but the mod adds clarity and gives the guitar’s volume control a more useable and progressive response. There’s some loss of sheer fuzz, but there’s still more than enough and the decay is smoother. The bass gets a bit tighter and better defined too. If you turn your guitar volume down to about seven or eight and then gradually back off the bias control, you can hear it hit a sweet spot where you enhance clarity without losing too much girth.

Though many people love their fat and frazzled charms, some players criticise Fuzz Faces for having too much bass and sounding woofy in the low end. This can veer into muddiness and give the circuit a muffled quality – especially with humbucker-equipped guitars.

Replacing the 2.2uF input capacitor with a smaller value capacitor will prevent the lowest frequencies from reaching the first transistor. The smaller you go, the less bass gets through.

Experiment with different values to achieve the bass response that works best for your guitar and amp – I’d suggest 0.47uF or even 0.22uF as reasonable starting points. Using lower value capacitors means you can try film caps rather than electrolytics, which may have tonal benefits.

Replacing silicon with germanium will require some more trim pot tweaking. Arbiter also used a 330R resistor rather than a 470R resistor for the Germanium circuit, but changing to 330R isn’t essential.

Using 3PDT toggle switches, you can make your fuzzbox run on both types of transistor. You can also combine silicon in the first stage with germanium in the second, or vice versa. Alternatively, switch between different types of silicon transistors – it’s entirely up to you.

For this, I make a larger circuit board with my preferred turrets for soldering – it has to be larger to accommodate four trim pots. I mount the toggle switches between the fuzz and level controls for protection and wire them to the circuit board.

With all four transistors biased by ear, the silicon sound is brighter, grittier, more aggressive and sustains a little longer. Germanium sounds warmer, less gainy and has sweeter tones when you back off the guitar volume. Both the silicon and germanium combinations work well too; providing different fuzz textures and compression characteristics.

The transistor switching version of this pedal requires a bit more work, but it’s worth the effort. The AC176 transistors are the star of the show for me, so I’m planning to try out some alternative silicon transistors in the future. Think of it like swapping tubes in your amp.

I’d be the first to admit this pedal lacks visual appeal, but it certainly resembles a boutique fuzzbox on the inside, and it sounds like one too. Feel free to draw your own conclusions about that while I decide on the finish, graphics and extravagantly retro knobs. Happy soldering and don’t burn your fingers.