Watch: Get the most out of your overdrive pedal with the help of the BOSS SD-1

Overdrive is the most common and beloved guitar effect, but do you really know what all those knobs do? We’ll show you how with the help of an all-time classic pedal, BOSS’s SD-1 Super Overdrive

Overdrive pedals, in their simplest form, were created to emulate the sound of a cranked tube amplifier. When you increase the volume of a tube amp up and the incoming signal is too much for the tubes, it gets clipped and becomes compressed, resulting in a sustained, distorted sound. Overdrive pedals work by electronically clipping the waveform to match what the overdriven tube amp produces.

Overdrive pedals can also be used as a boost, to push a clean amp into overdrive which might not have enough gain, or indeed an amp on the edge of break-up into full-blown distortion. The BOSS SD-1 is famous for being used both as an overdrive and boost pedal.

First launched in 1981, 2021 is the 40th Anniversary of the now ubiquitous Super Overdrive, and it’s easy to see why this diminutive, yellow workhorse has been the gain pedal of choice for a plethora of iconic artists such as Jimmy Page, Jonny Greenwood, Sleater-Kinney and even virtuosic session players such as Mason Stoops. 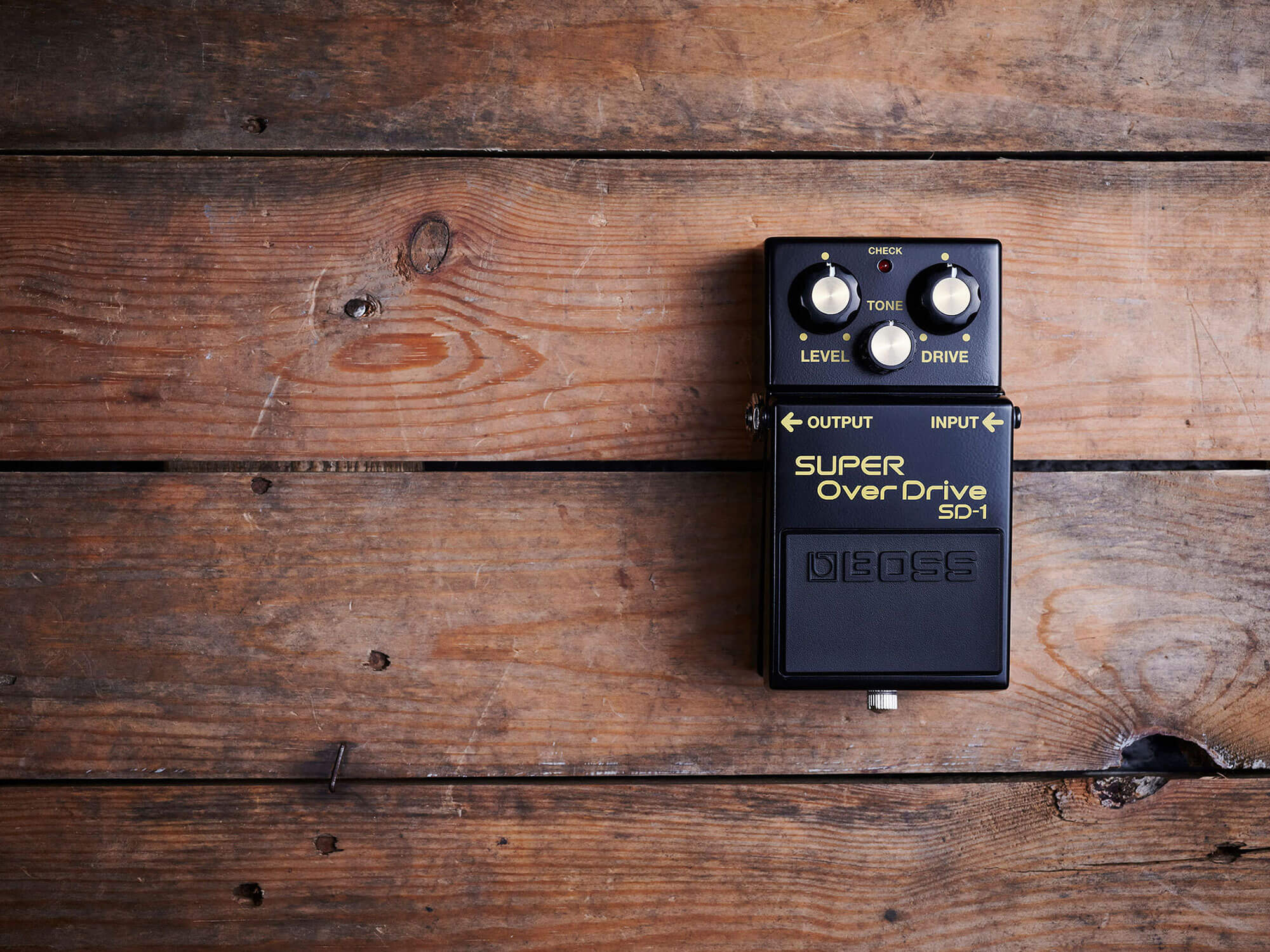 The SD-1’s simplicity and ease of use is what has helped it become one of the most widely used and respected stompboxes on the market today, and it’s also what makes it the perfect pedal to learn all about what an overdrive does.

At its core, the SD-1 has three simple and easy to use control knobs and a solitary footswitch, all of which you’ll find on pretty much any of the thousands of overdrive pedals that have followed it. That’s it.

Level controls the pedal’s overall volume, overdrive controls how much drive the pedal produces – from a simple boost all the way to high gain – and tone adjusts the overall EQ, so you can dial in just the right amount of highs and lows to suit your taste.

In the video featured here, we’ve highlighted the SD-1s versatility by using it in a variety of situations. Firstly, you’ll hear the pedal driving a clean amplifier. While this humble pedal is perfect for adding some attack to your lead melodies, it’s equally comfortable when injecting some warm crunch to rhythm tones. Use your guitar’s volume wisely and it cleans up well too.

If you prefer your amp to have just a little hair then fear not, as the BOSS Super Overdrive is equally adept at driving your overdriven amp into gnarlier territories, whether you use it as a boost for some extra girth or are looking for a pure distorted sound. Both Zakk Wylde and Josh Homme can be heard using the pedal in this context. 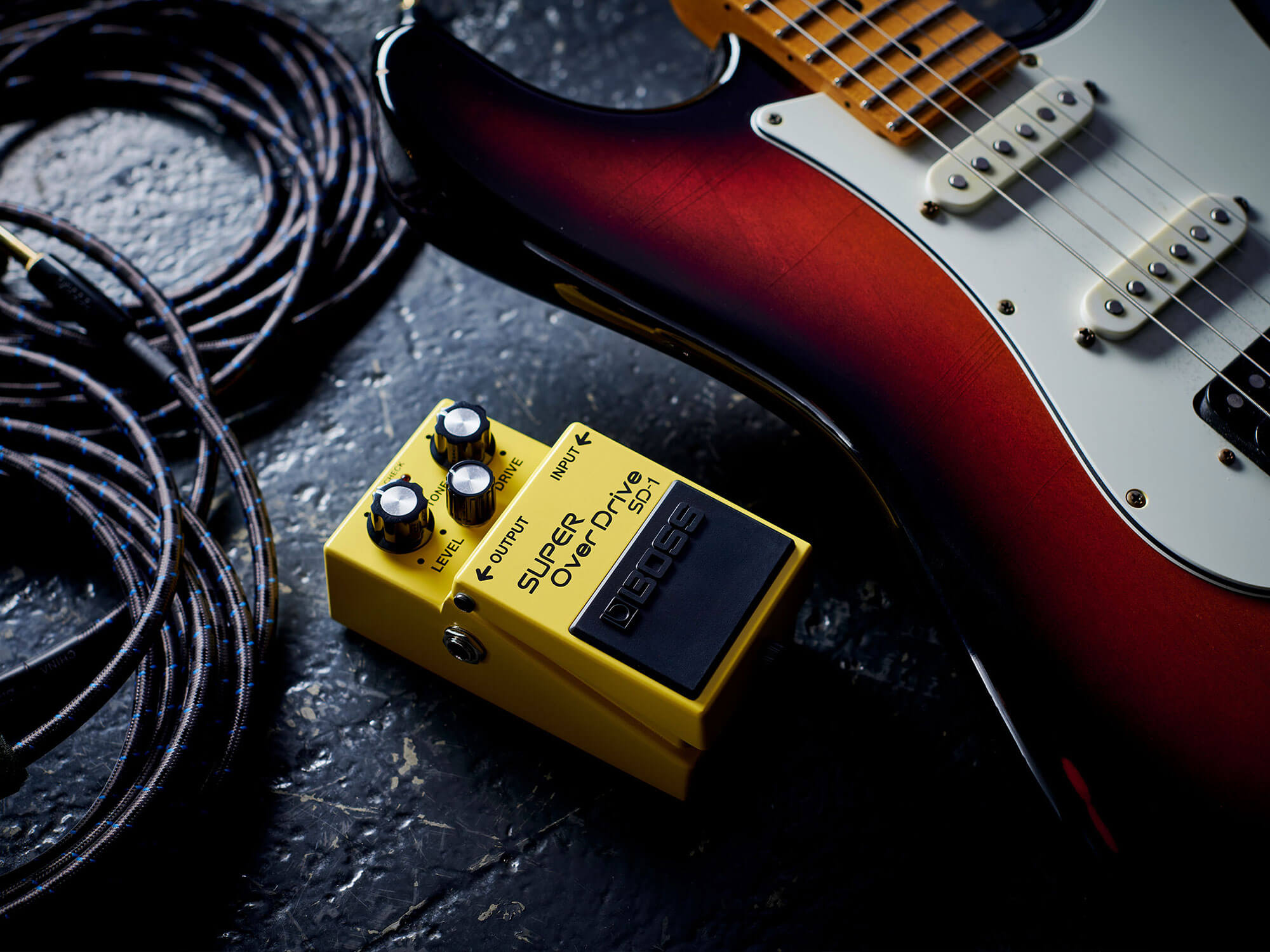 Where the SD-1s versatility really begins to shine through is when it’s used alongside other dirt pedals. In this video we’re stacking two Super Overdrives together – the standard SD-1 and the 40th Anniversary edition, seen in black – and we’ll adjust the controls throughout to detail how the pedals work in conjunction.

In the final excerpt, we’ve added some modulation into the mix courtesy of the BOSS
PH-3 Phase Shifter. The PH-3 is a characterful pedal in its own right, but using it in a chain with the SD-1 elevates it to another level, giving it a natural, analogue sound.

Finally, you’ll hear the SD-1 Super Overdrive in a full track demo. 40 years on from when it launched, it still sounds new and vibrant, and works impressively well in almost all overdrive and high-gain settings. Easy to use, friendly on your wallet and still found in its near bomb-proof enclosure, you’d be hard-pressed to find another drive pedal this adaptable and accomplished in another 40 years.

For more on the BOSS Super Overdrive SD-1, visit boss.info.