Get to grips with some interesting shapes and variations on the D major chord. 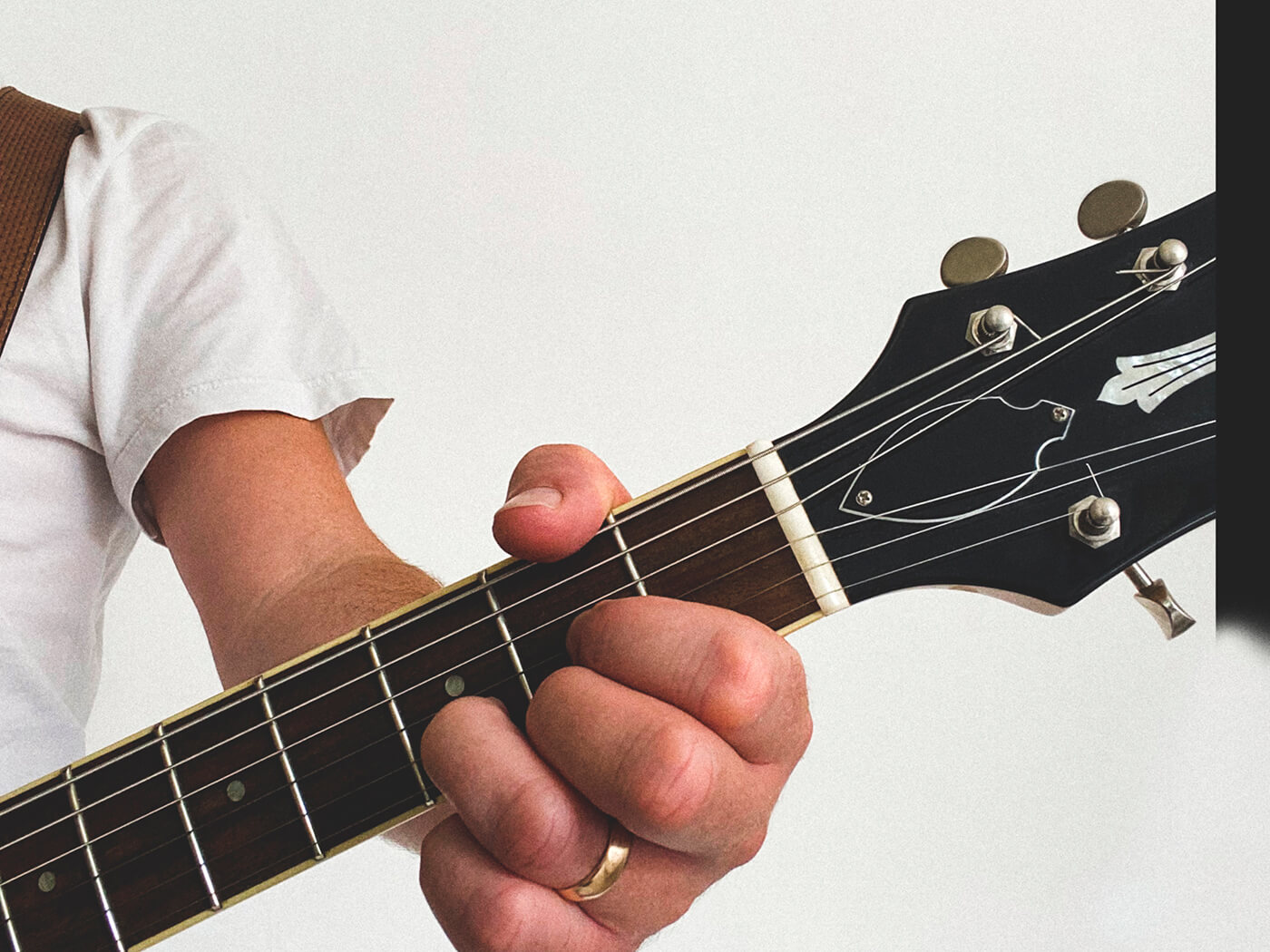 D major is one of the easier open string chords, the close spacing of the notes making it fall under the fingers relatively comfortably. It’s a popular key for songwriters as chords IV and V are G and A Major, and chord II is E minor, meaning most of the common chords in the key are available as open string chords.

As a relatively high-voiced four-note chord, D major is chimey rather than weighty, but as we will see this can be fixed by using drop D tuning. The chord can also be re-fingered so that finger one is available for bass notes, slash chords. and possibly hammer-ons and pull-offs on the lower strings.

The notes of D major are D, F♯ and A. These are the root, major third and perfect fifth, steps one, three and five of a D major scale. With the bright sounding major third as the highest note there is plenty of potential for interesting variations and colourful added notes using suspended chords, sixths, and sevenths. Enjoy playing and experimenting with these chords – see you next month. 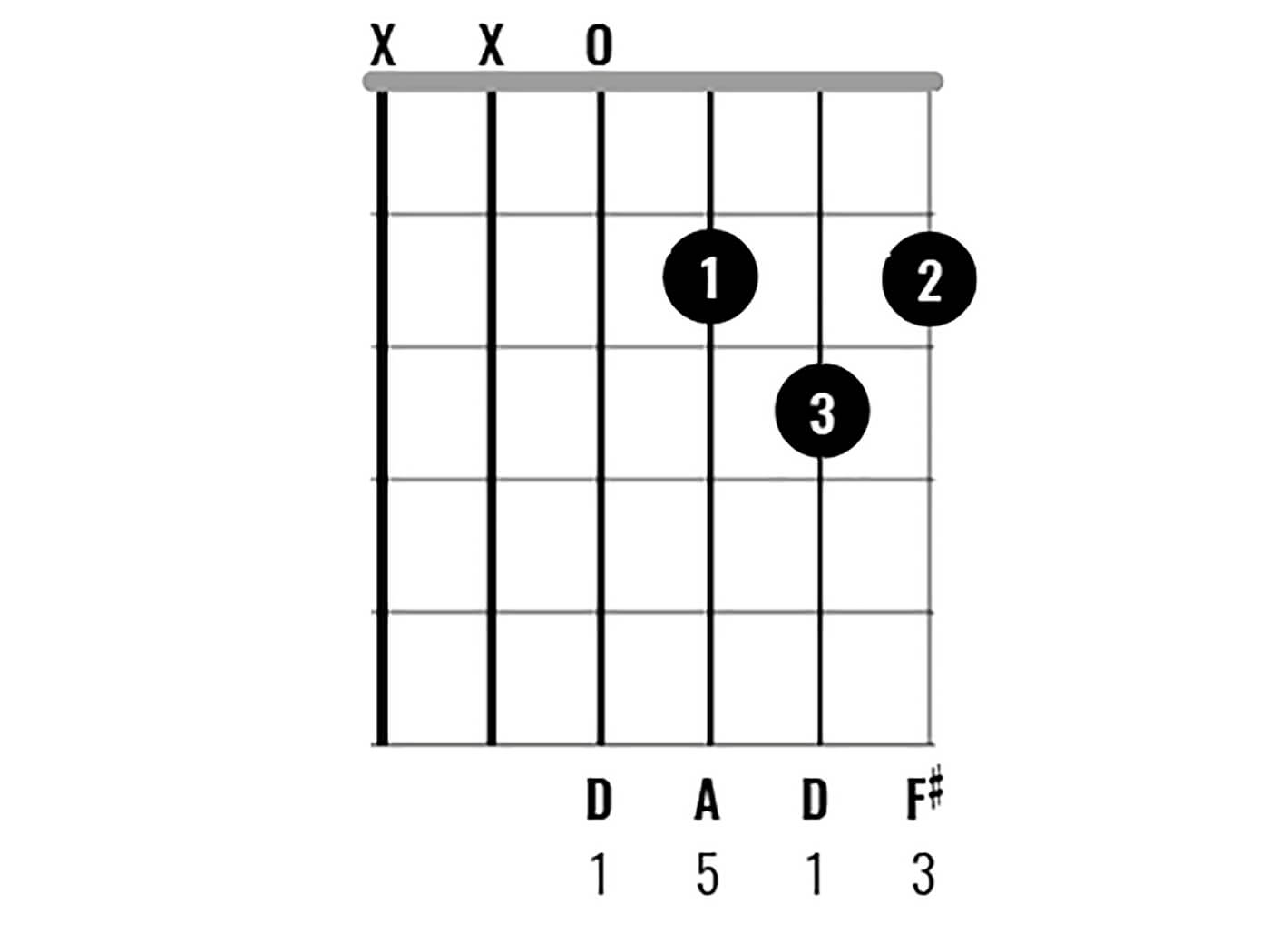 Guitarists with fat fingers sometimes struggle to hold down the D on the B string without muting the other two strings, so some care is needed here. Allowing the hand to rotate outwards a little so that fingers one and two lineup with the frets can help with this. If possible, pop your thumb up over the edge of the neck to mute the low E; chords sound best the root note in the bass, and while you might get away with the open A, the E definitely doesn’t fit. 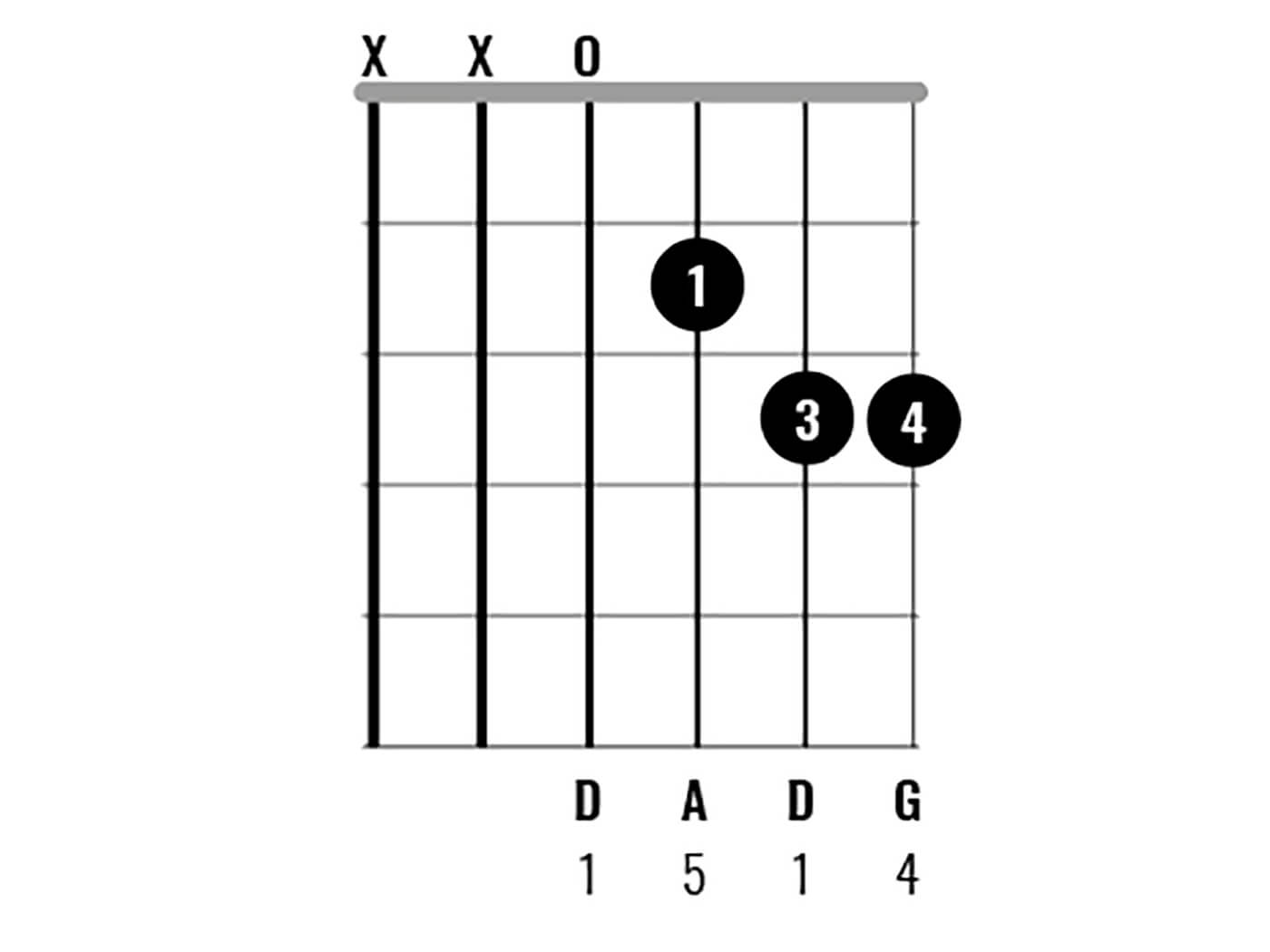 There are two kinds of suspended chord, sus4 and sus2. To make a sus4 chord you put the fourth in the chord instead of the third. In this case that means playing the note G instead of F♯. Suspended chords seem to want more than anything to go back to the original major chord, so place your pinky on and off the guitar as you strum. Sus chords sound good in D because of the third’s exposed position at the top of the chord. 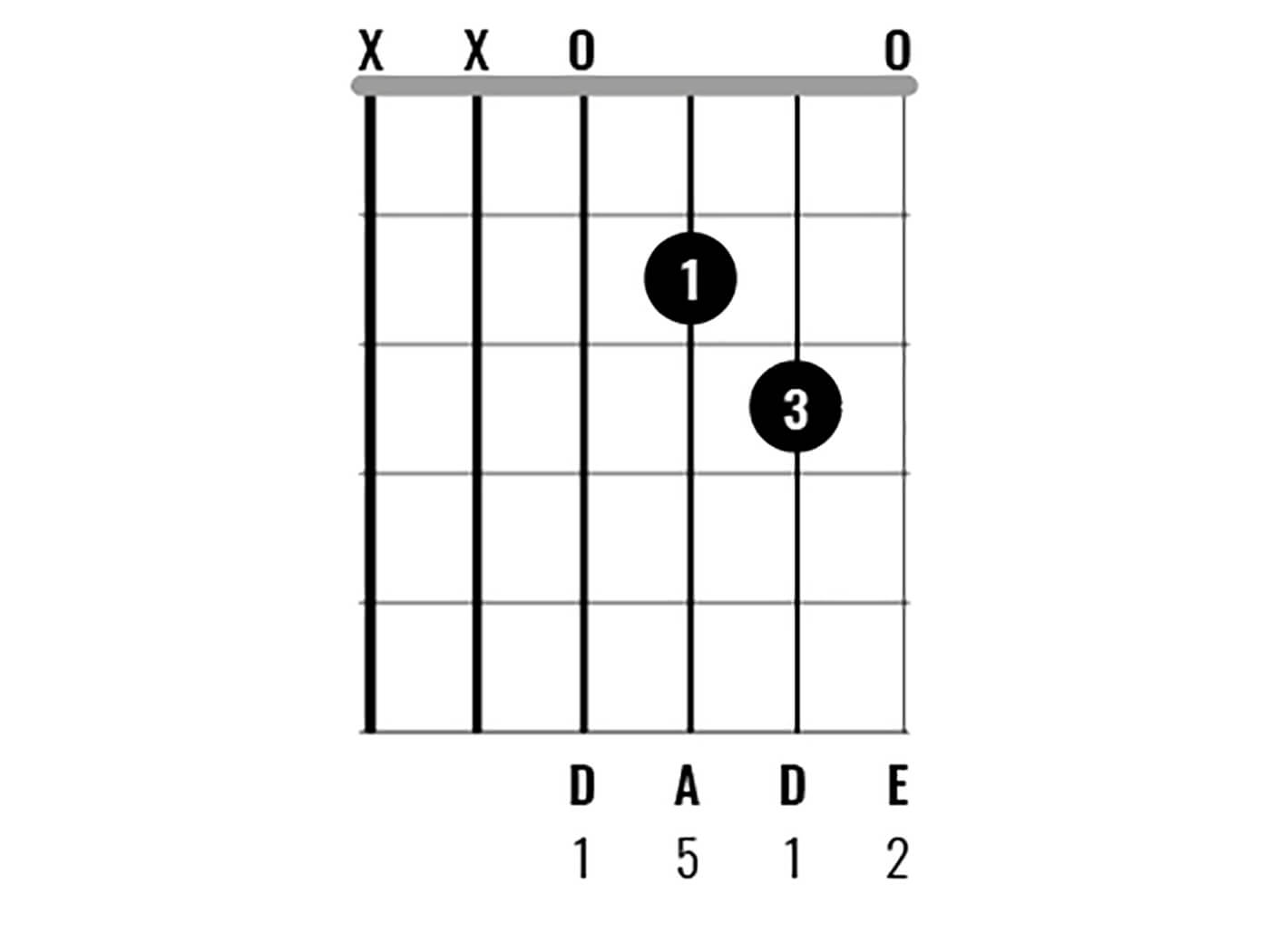 Here we have the other suspended chord, the sus2, which also sounds good alternating with the major chord. You can also have fun mixing both the sus chords with the major, and you’ll be in good company, as the catalogue of artists that have used these sounds ranges from Led Zeppelin to Bryan Adams and from the Cure to KT Tunstall. 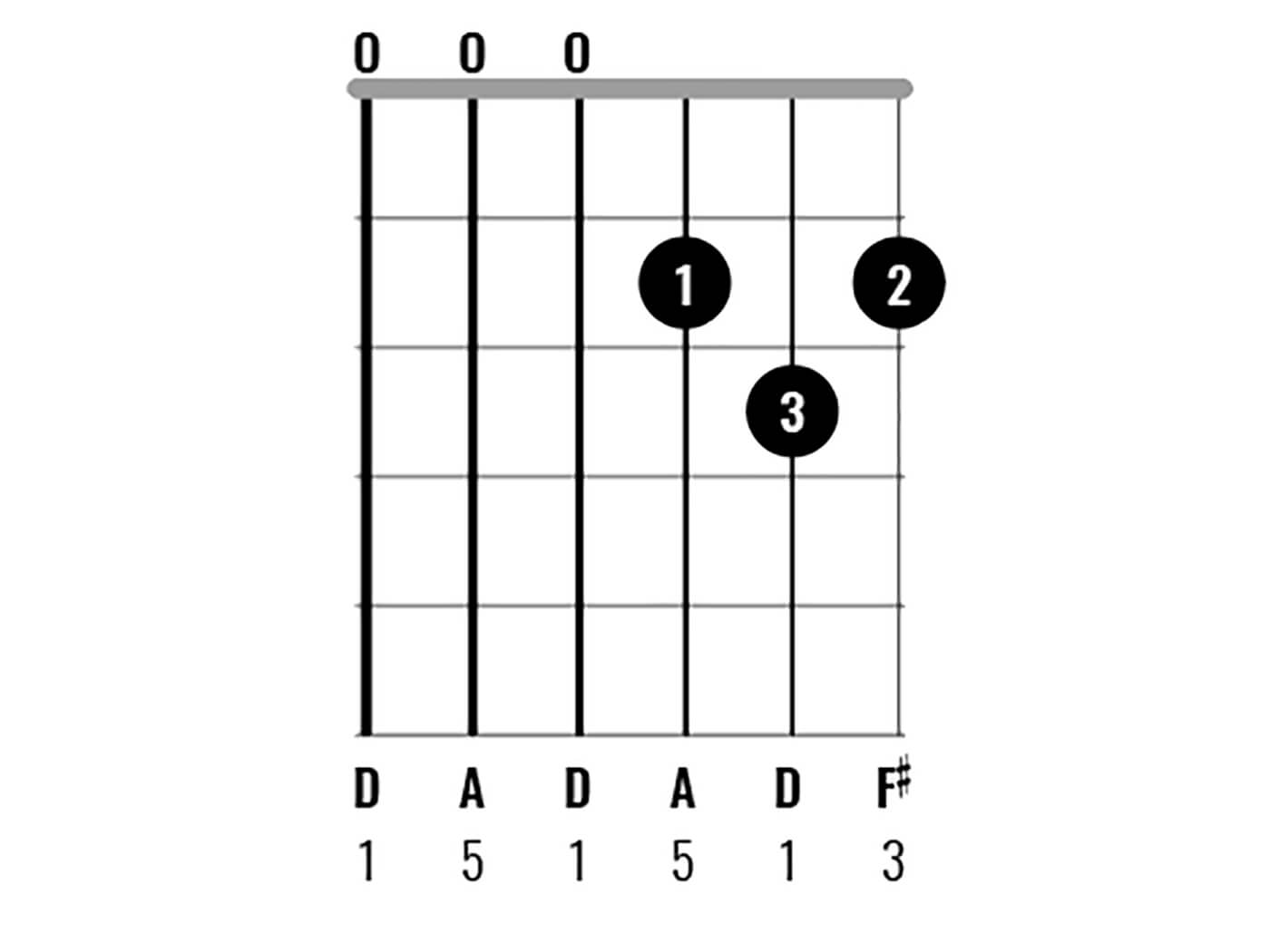 Our favourite method of putting a guitar in drop D is to play the E, sixth and D, fourth strings at the same time, and then drop the sixth string down until the strings sound an octave apart. Digital tuners do the job well too. Depending on what kind of guitar, it should take about half a turn of the tuner. The result is a very resonant D chord and an interesting reconfiguring of the guitar away from E and towards D. Can you work out how to play a G chord in this tuning? 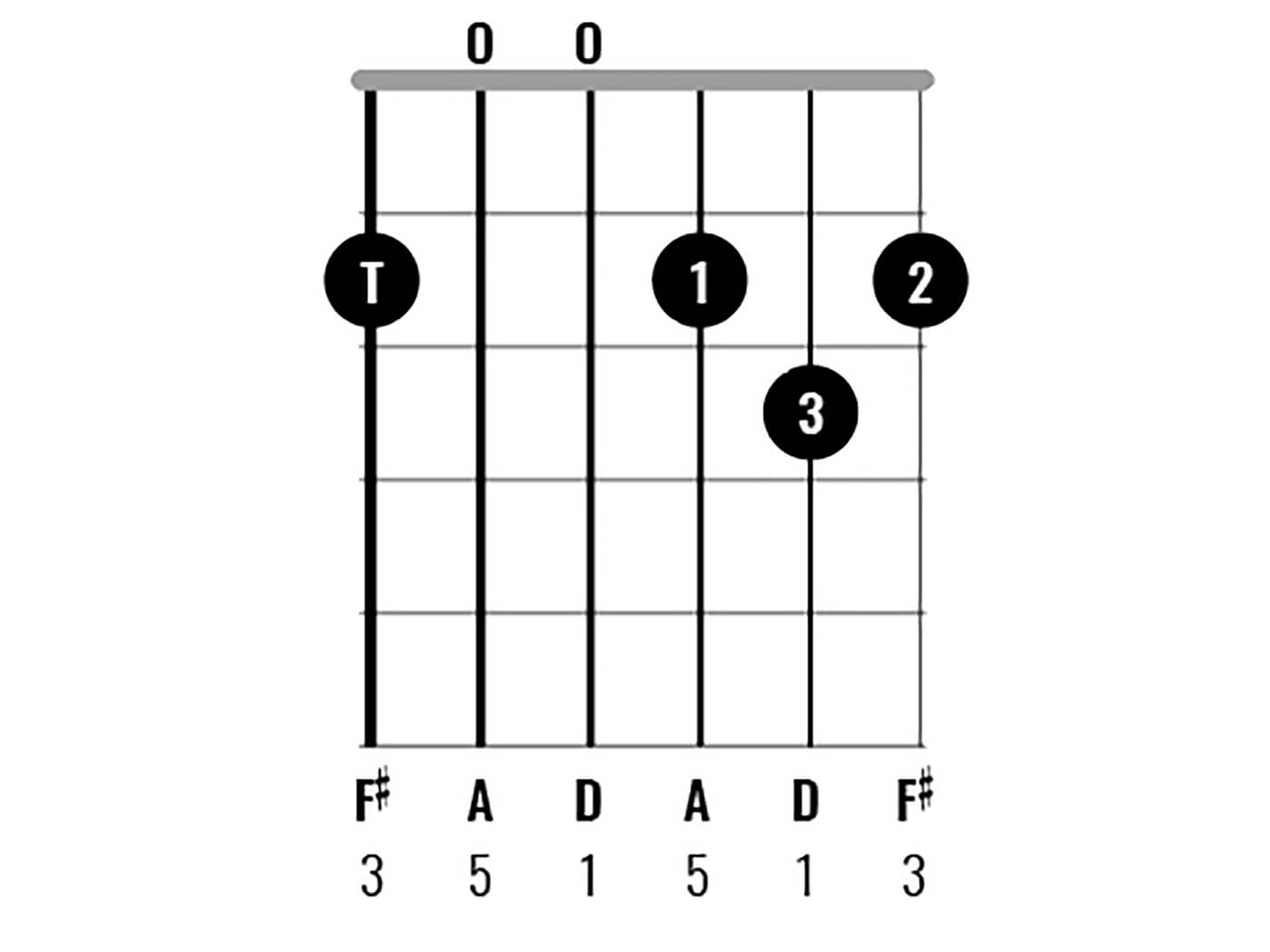 Back in standard tuning, some of the guitar’s unused low notes are just crying out to be added to our basic D major shape. Here, we’ve allowed the thumb to come over the edge of the neck to hold down a low F♯. If that’s tricky for you, re-finger the chord using all four fingers. You could try a finger style approach here, playing the bass with your thumb and leading on to the root note of a G chord. 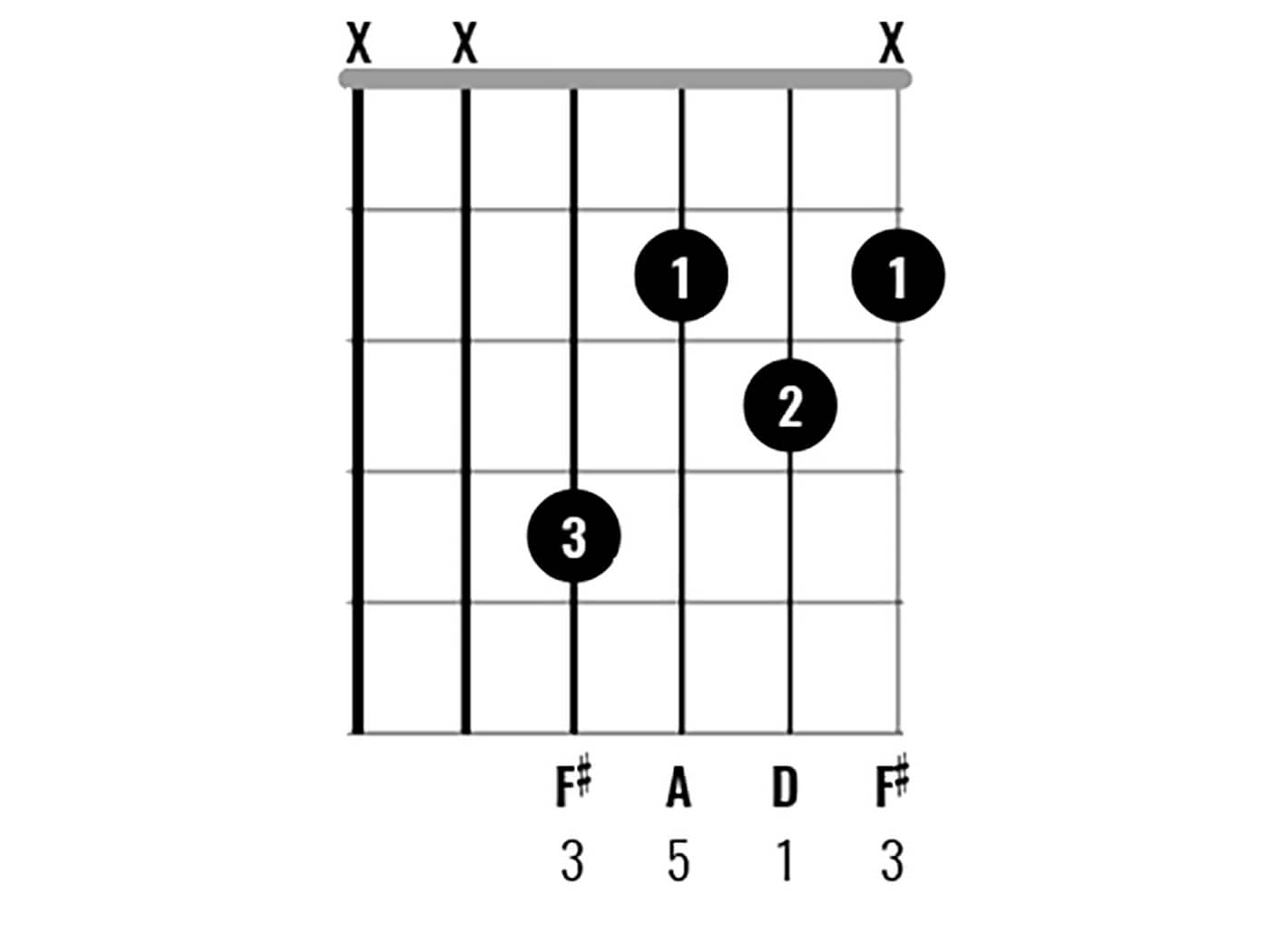 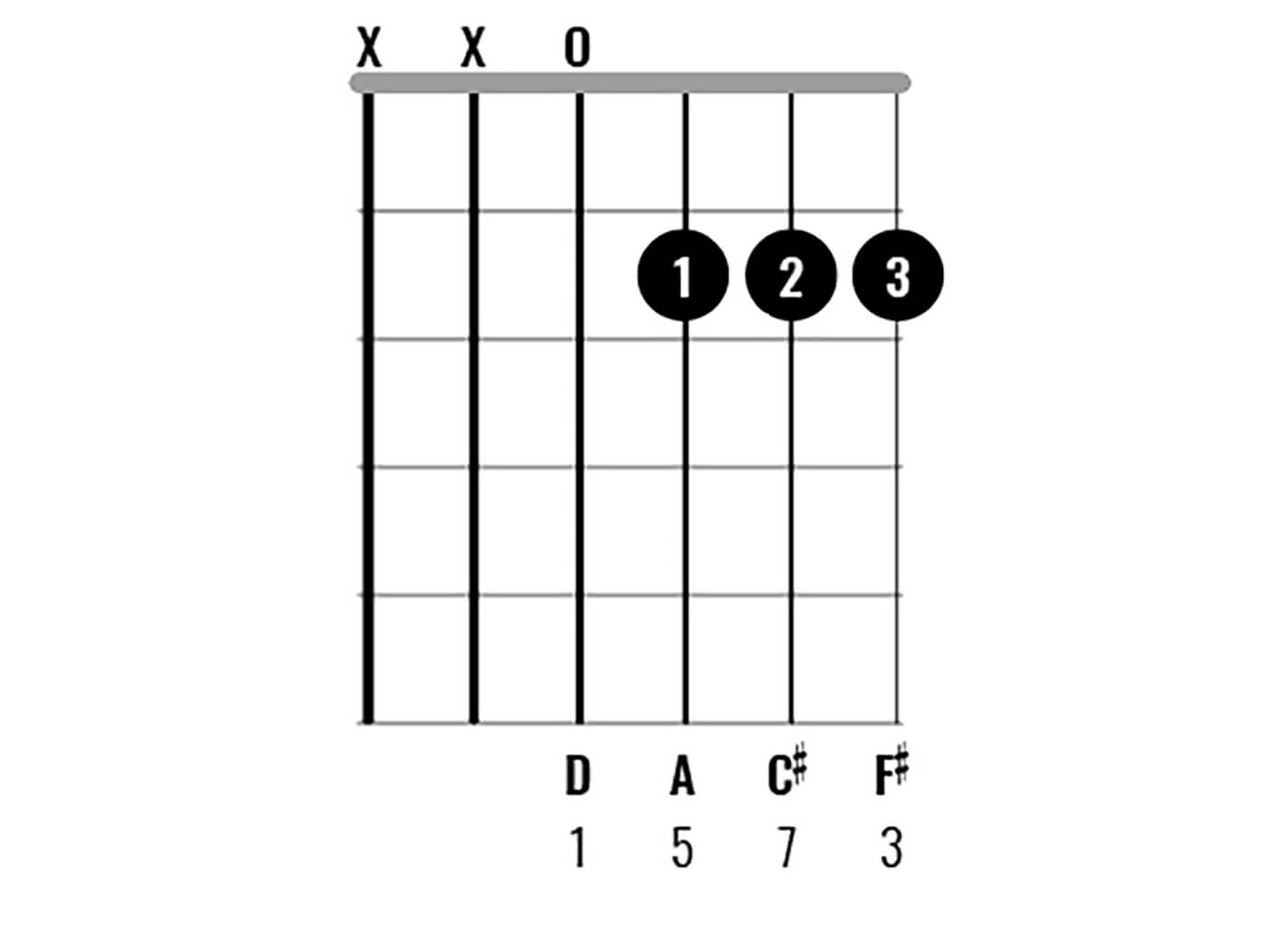 Taking the note D on the B string down one fret brings C♯ into the chord. This is the major seventh, making a D major seven chord. This chord could well be played with just one finger in a half-barre across the top three strings. Major sevenths have a distinctive dreamy quality, and sound good leading onto D7 or D6. 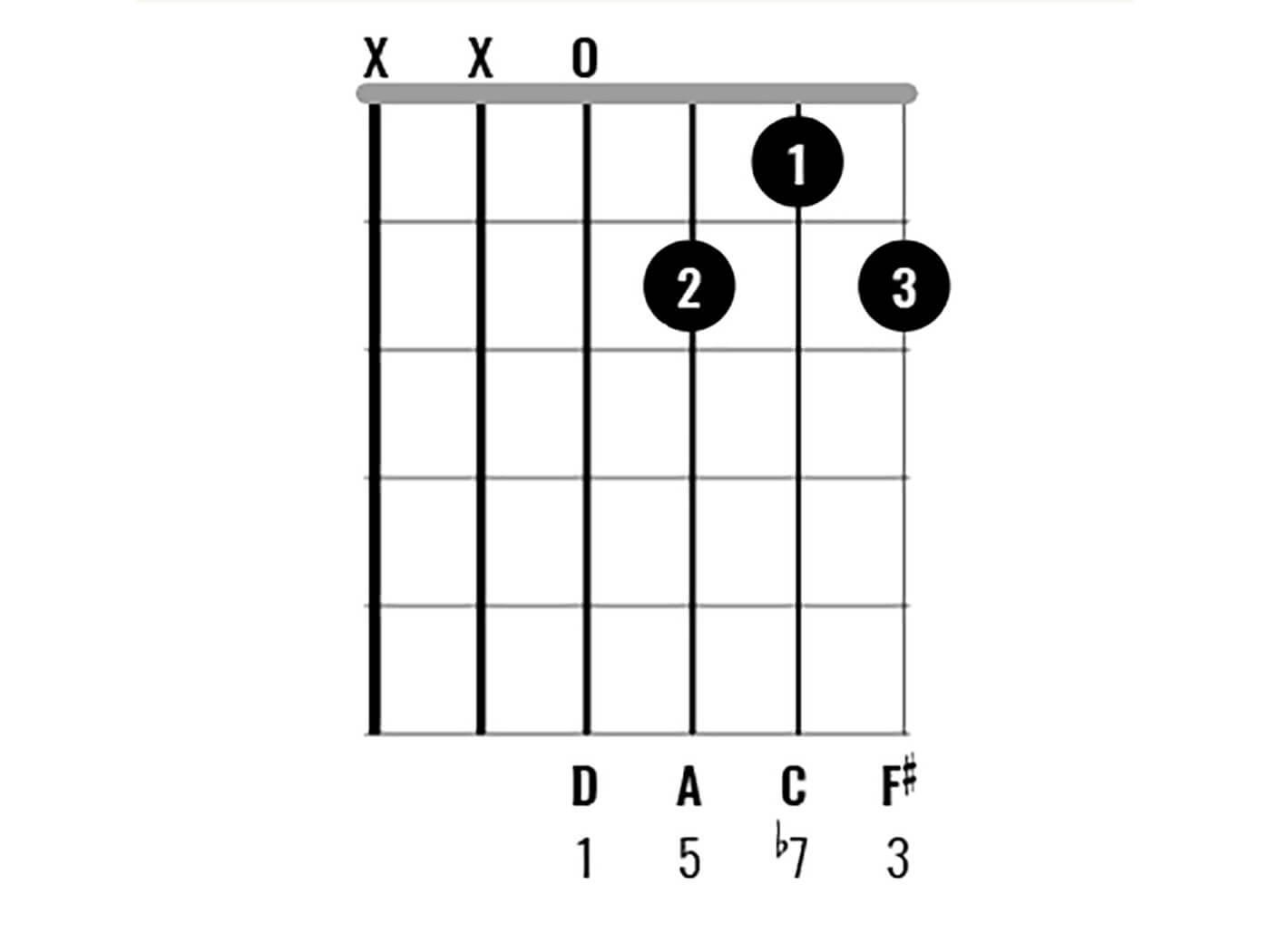 When you add the minor seventh, C, to a D major chord you get D7. This chord wants to progress to G, the “tonic” chord of which this is the “dominant”. Music shouldn’t always do what we expect, however, so try playing D, Dmaj7, D7 and then G minor. Or E minor. Or maybe B major. Experiment, and see what you come up with. 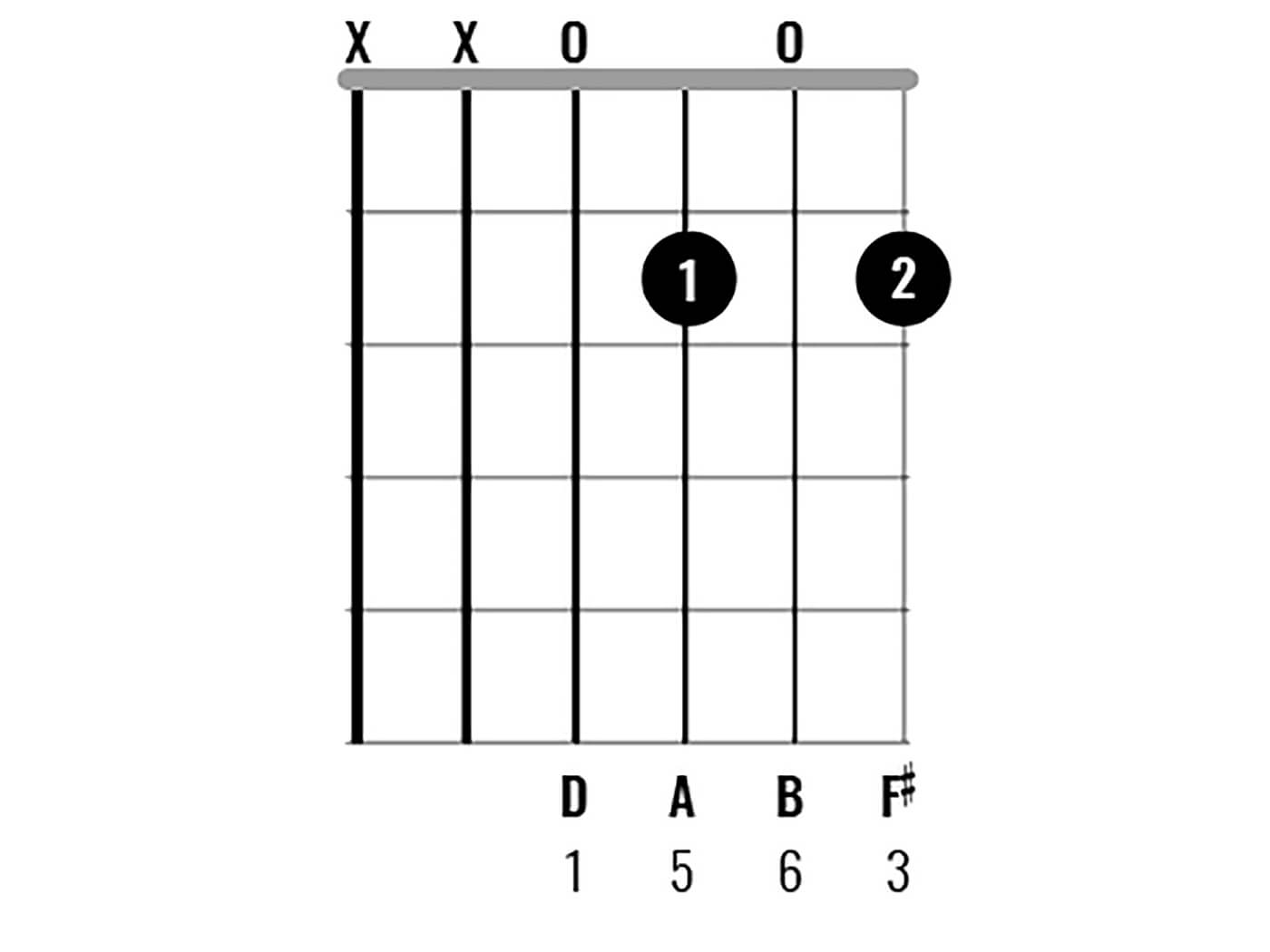 The major sixth adds an interesting colour to a major chord but in the case of D6 it can be hard to fret cleanly as the fretted notes can get in the way of the open strings. Try using fingers two and three instead of the more obvious one and two. This chord sounds good in a sequence involving D and D major seven. 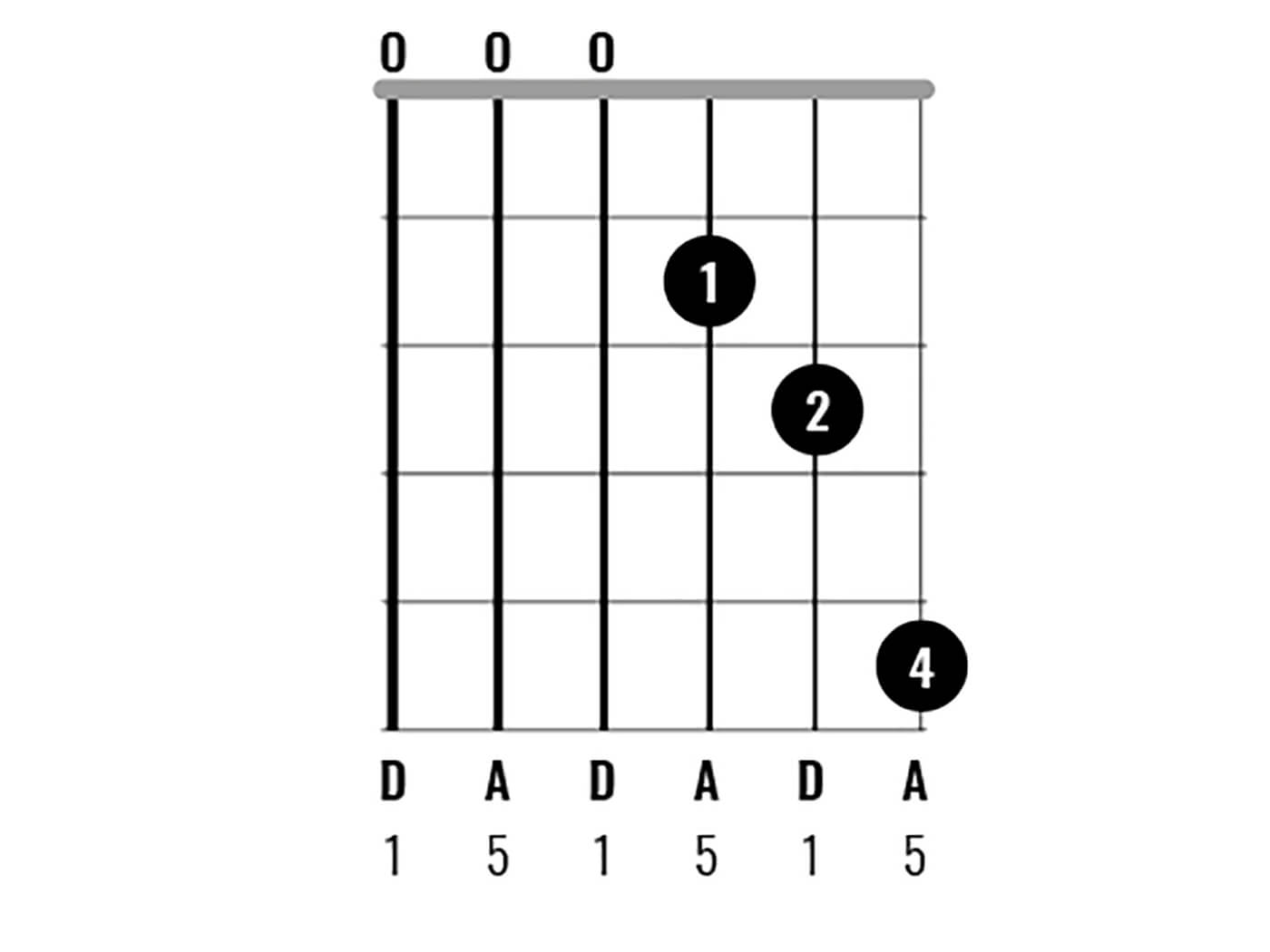 D5 is a chord made up entirely of the notes D and A, the root and fifth. You could think of it as a D major chord with no major third. For this shape we’ve returned to drop D tuning, and it’s a massive sound which is impressive on acoustic or electric, but even more so on a 12 string. Remember that the sus chords, sixths and sevenths we have looked at will all work equally well when you are in drop D tuning.