Chord Clinic: How to play chords like Bob Dylan (Part 1)

The impact of Bob Dylan’s music still resonates more than 50 years after he became a household name, and the way he used chords in those early days remains as interesting and instructive today as it ever was. 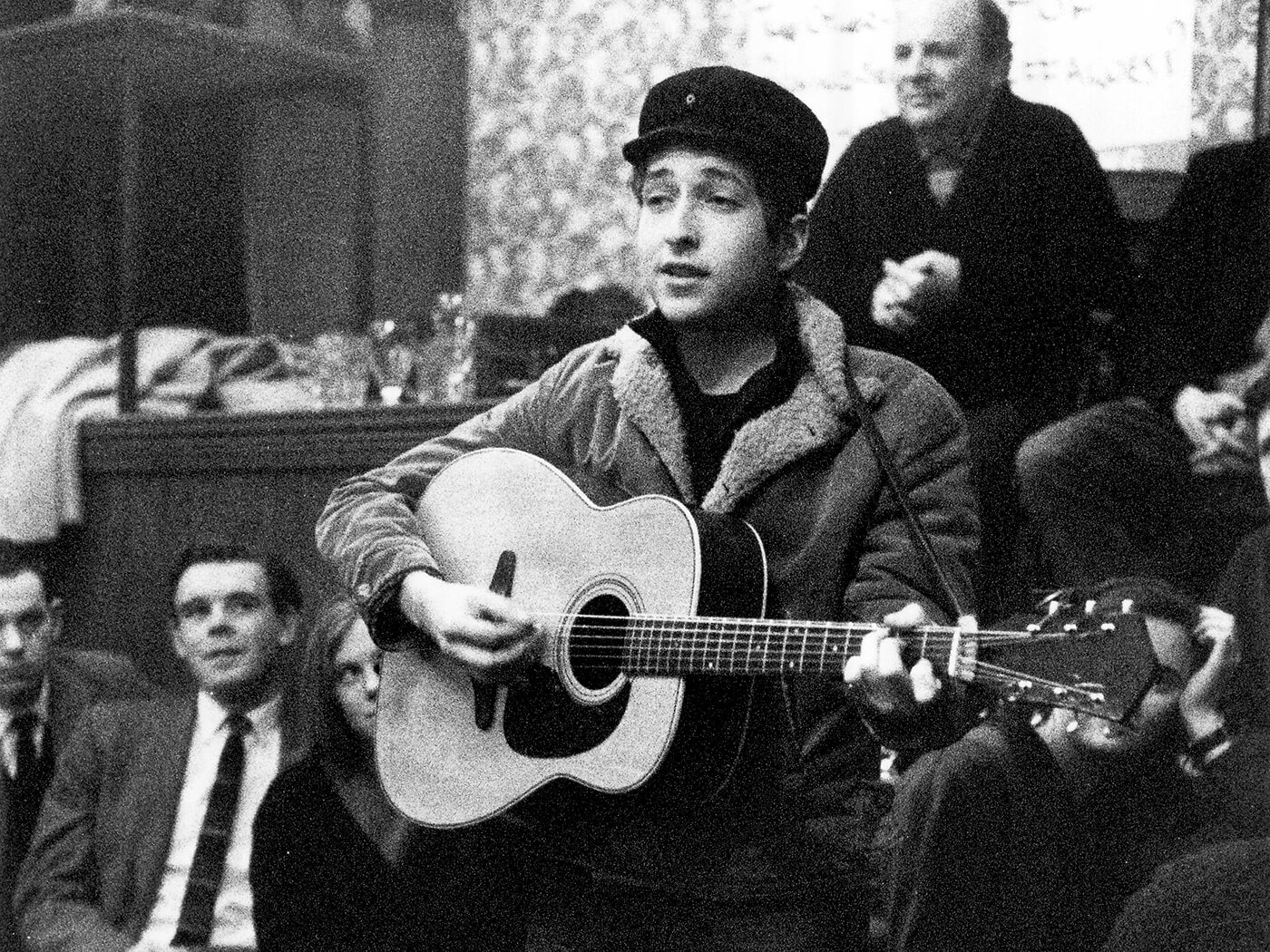 As anyone who has experienced the occasionally unrecognisable reworkings of classic tracks that litter his live shows can attest, Bob Dylan is one of those icons who refuses to conform to anyone’s expectations but his own.

But what his left-field adaptations of his own epochal songs demonstrate is that, when you have a solid bedrock of melody and structure, you can take a track almost anywhere. Here, however, we’re eschewing the avant-garde and approaching the shapes and progressions that early Dylan rode to stardom, aided by nothing more than a steel-string acoustic, a harmonica and that weathered and wonderfully drawling voice.

For these examples, you need to put the guitar in drop D tuning. Hit the low E string (now a D, of course) of the D chord with a fairly fast strumming pattern, before quickly switching to the C almost as a passing chord for a few beats and then going back to the D. This sounds like a nice intro and you could pair it with bars of D, C and G/B. G/B is what we call a slash chord, meaning a G major chord with the note B in the bass.

Be careful to mute the unwanted notes and avoid catching the sixth string when playing the C chord. You can mute it by letting your thumb come up over the edge of the neck or by using the tip of your third finger.

Staying in drop D, start with the open D chord from figure 1 but this time switch to another slash chord, G5/D, instead. Try hammering on with your fourth finger just after you first strum this chord. You could also alternate between the D chord and the second G shape, the third finger can be angled back slightly so that it mutes the A string.

Try this one with a capo at the second fret for increased brightness and a more authentic Dylan vibe. The Minnesota musician rarely plays all six strings with a single pick stroke. He is much more likely to pick the bass note and then strum the upper notes of the chord, creating a two-part chords-with-bass accompaniment style. See if you can come up with your own version.

Anybody who expects Dylan to be all open-string cowboy chords needs to get to grips with this example. Even from the start, it was clear he knew plenty of chords, including some uncommon voicings. Play the first four chords of figure 3 using the technique of separating the bass note and strumming the top notes outlined above.

Watch out for the tricky F/C chord, based on an open D shape moved three frets up the guitar. You could anticipate this by using fingers two, three and four to play the D major chord and then sliding them along the strings. Use the underside of your index finger to mute the open A and D strings when playing that quirky A/C# chord. 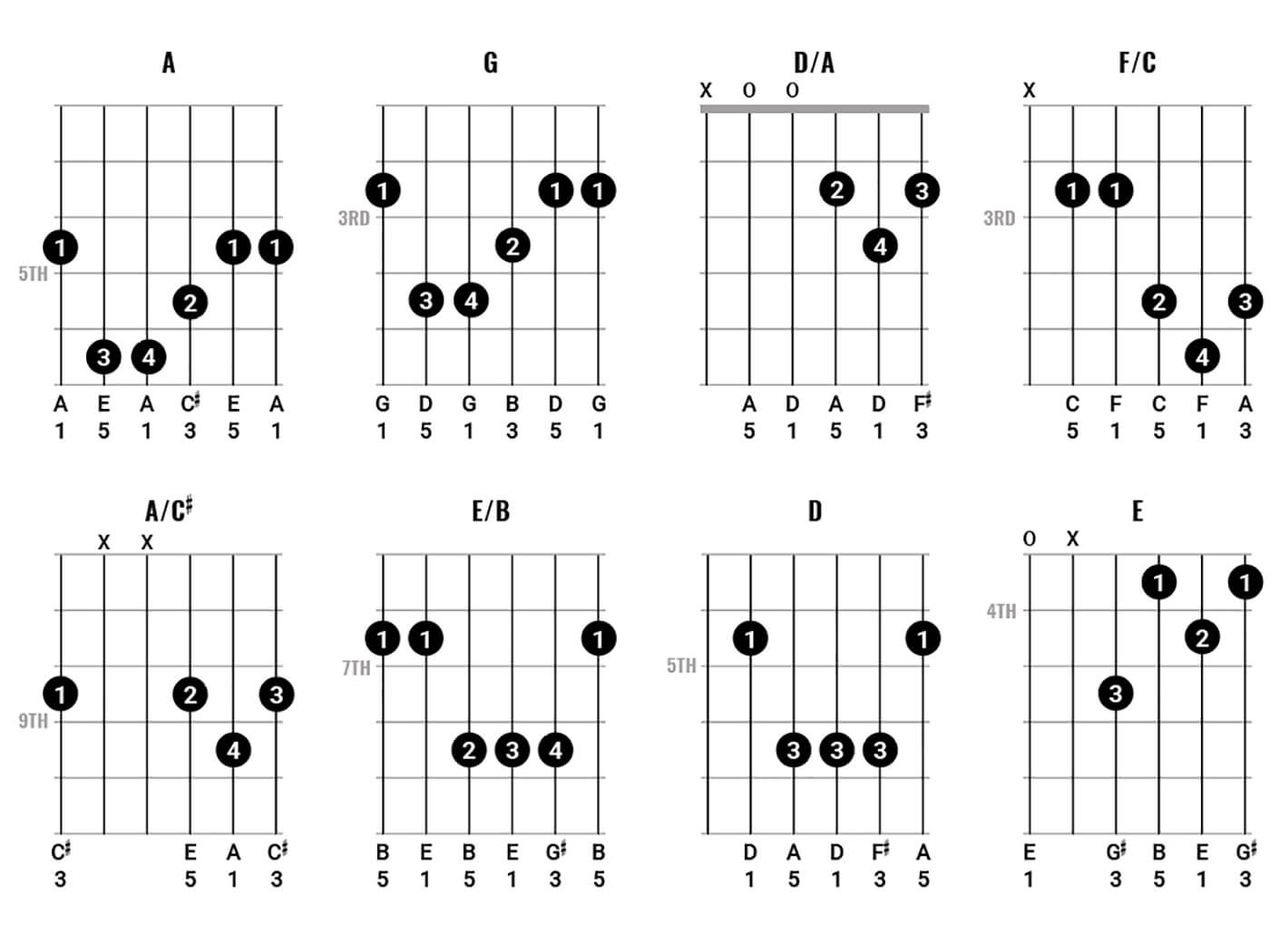 In this example, the chords have been adapted to create a descending bassline. Try playing it with a folky three-time feel for more of a Dylan flavour. Playing the bass note on the first beat, then two downstrokes on the upper notes will help.

With a capo on the seventh fret, regular open-string chords are given a sweet chiming quality. This sequence is another that’s enhanced by a separate bassline so, again, be sure to pick the bass note of the chord first and then strum the upper notes. Finger four stays in the same place for the first four chords, so do your best to leave it there and not move it unnecessarily. Master the techniques here and have fun introducing them into your own playing. 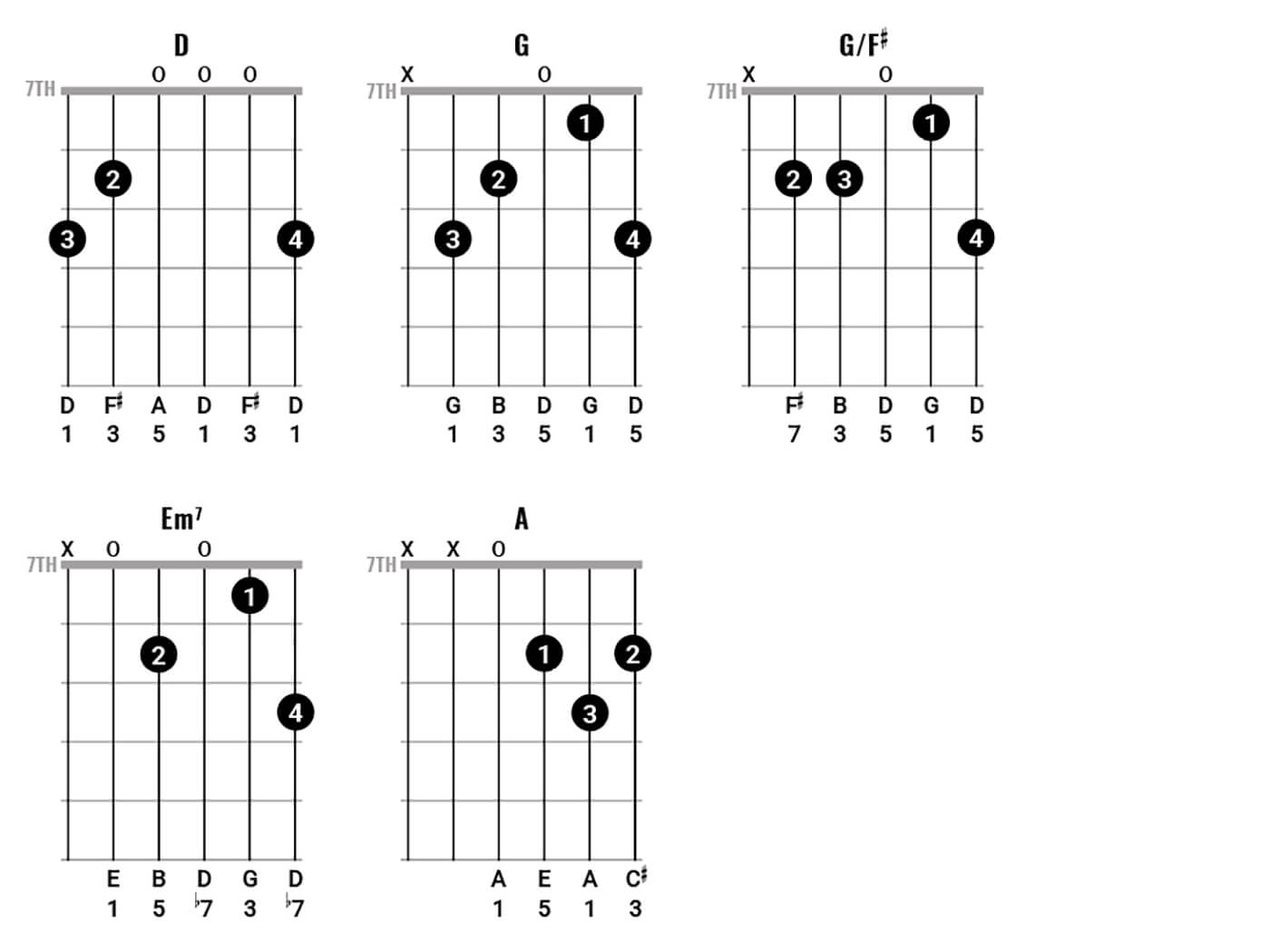