Chord Clinic: How to play chords like Bob Dylan (Part 2)

In the second part of our examination of Bob Dylan’s use of chords, we dive into the interesting twists that 'going electric' added to his repertoire.

As we learnt in part one, Bob Dylan’s unique take on chords has long been one of the most recognisable facets of his unparalleled back catalogue. In 1965, Dylan was looking for a backing group for his first ‘electric’ tour of the USA. His search led him to the Canadian-American roots outfit that became known as The Band.

The subsequent amphetamine-fuelled dates are legendary for the hostile responses they provoked from folk purists, typified by the infamous “Judas” moment at the Manchester Free Trade Hall in May 1966. But when Dylan wasn’t getting heckled, his chordal progressions mutated into new but no less compelling forms.

This distinctive eight-bar chord sequence begins with both a high pedal note and a chromatic bassline, where the top string’s G pedal note is present in the first three chords and the use of slash chords allows the bassline to move fret by fret. You could experiment with F/A and Fm/A♭ and allow the chromatic line to continue all the way down to C/G, though it’s arguably more Dylan-esque to go for the solid Gm/B♭ chord.

Pay attention to the Xs on the low E string. The string can usually be muted by whichever finger is on the A string. Allow the underside of the third finger to mute the A string in the final G major chord too. 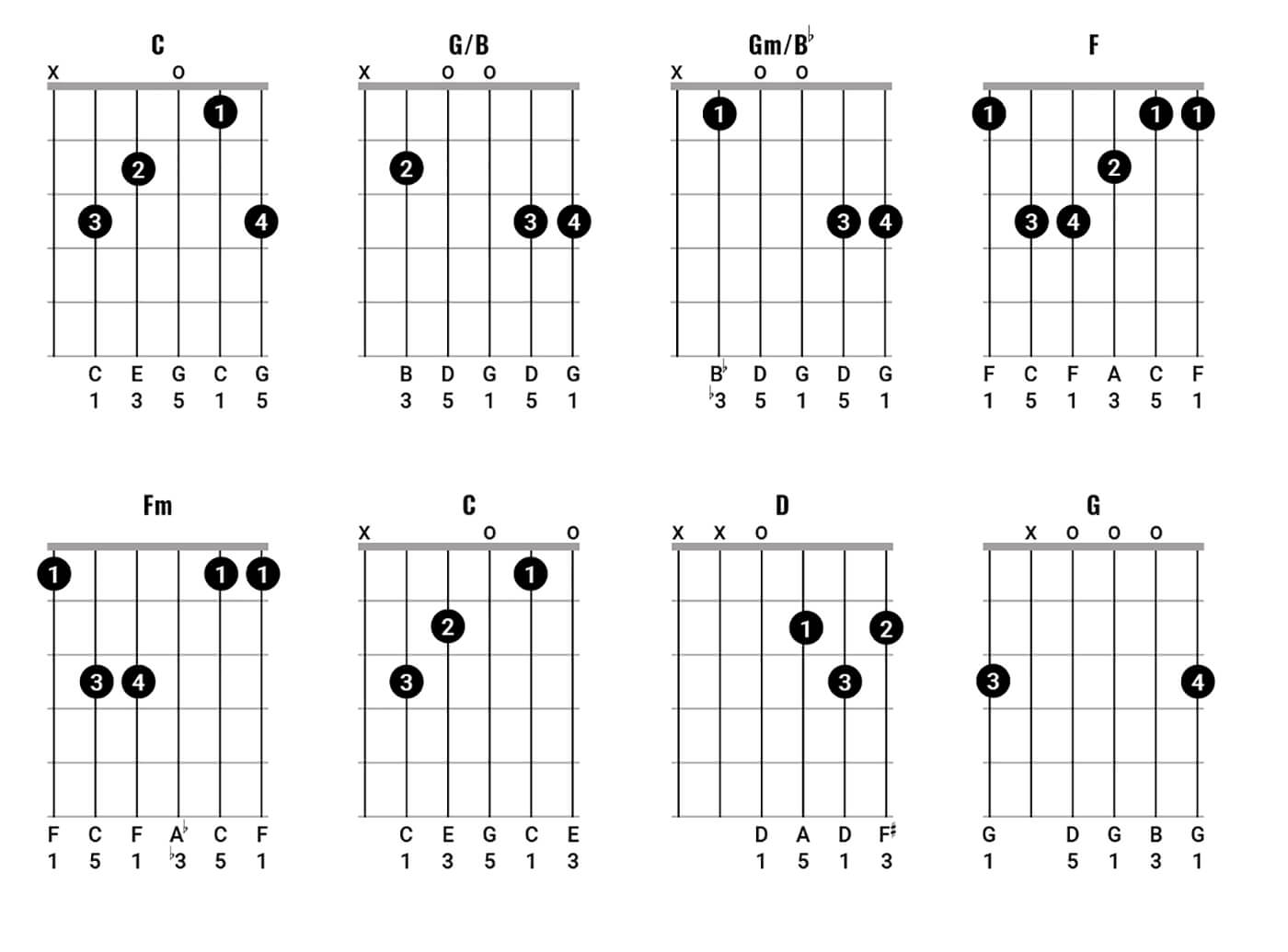 We can see this sequence working as a middle eight and, as is often the case, it starts on chord IV, which we’ve taken up at the 8th fret to give the music a boost. The E7 chord comes as quite a surprise and only occupies half a bar, followed swiftly by the F chord and a bar of C major. Experiment with the C barre chord from this example or either of the options from figure 1 and decide which works best for you.

These two chords follow the first two chords from figure 2 to make the last four bars of our middle eight. We’ve chosen to play these as barre chords but, if your hand is hurting, you can swap in their open-string equivalents. Remember, the best way to hold down barre chords is to squeeze with your thumb and not to pull from your elbow. We like these fat voicings and the way the seventh is voiced low in the chord. Try them out and you might find that they progress smoothly from one to the other. 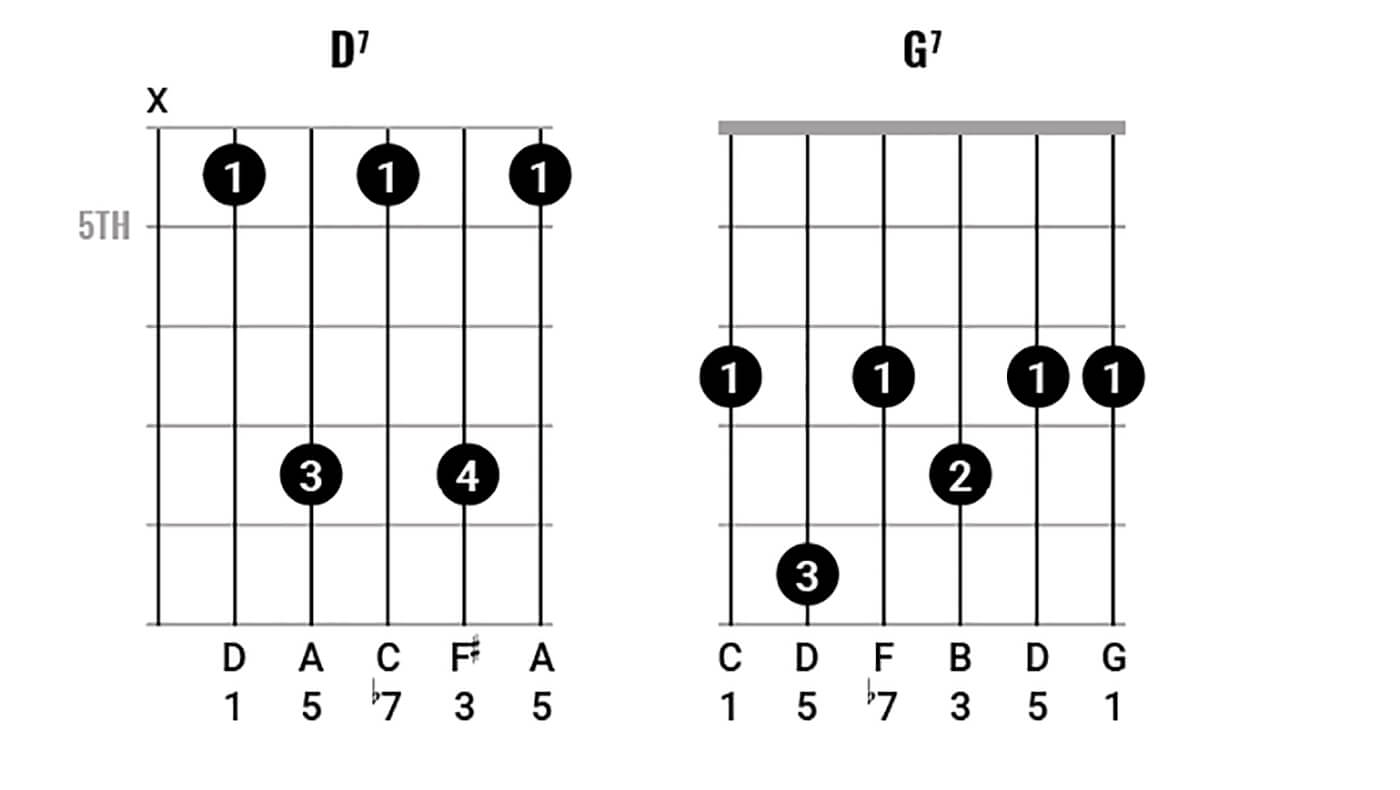 This roots-led sequence reflects Dylan’s flirtations with the genre while he was with The Band, and is best played with a lively tempo inspired by the zydeco music of Louisiana. We’ve chosen to use the more economical thumb-over version of F major here, and create a verse made up entirely of F and C7 chords.

The chorus or tagline at the end of the verse consists of F major, followed by the last three chords, which can be repeated before heading back to the top of the verse. The F7/A adds a cool bassline to the progression. But try playing a root position F7 instead to hear the subtle difference this chord makes.

Introduce a more sombre mood by playing these chords with a slow tempo. Begin with the first four chords and then follow them with a bar of E, B, and two bars of C♯m, making eight in total. It’s tempting to head back to B for the final bar but instead it’s deliberately been left open and unresolved, adding to the restless nature of the sequence.

Try hammering on with your third and fourth fingers after you’ve put the barre down on the G#m chord. This should work on C♯m too, with the second, third and fourth fingers. You could also try pulling off onto the open string with the third finger in the A major chord, leading back to the E chord. Have fun with these ideas and see what you can come up with. 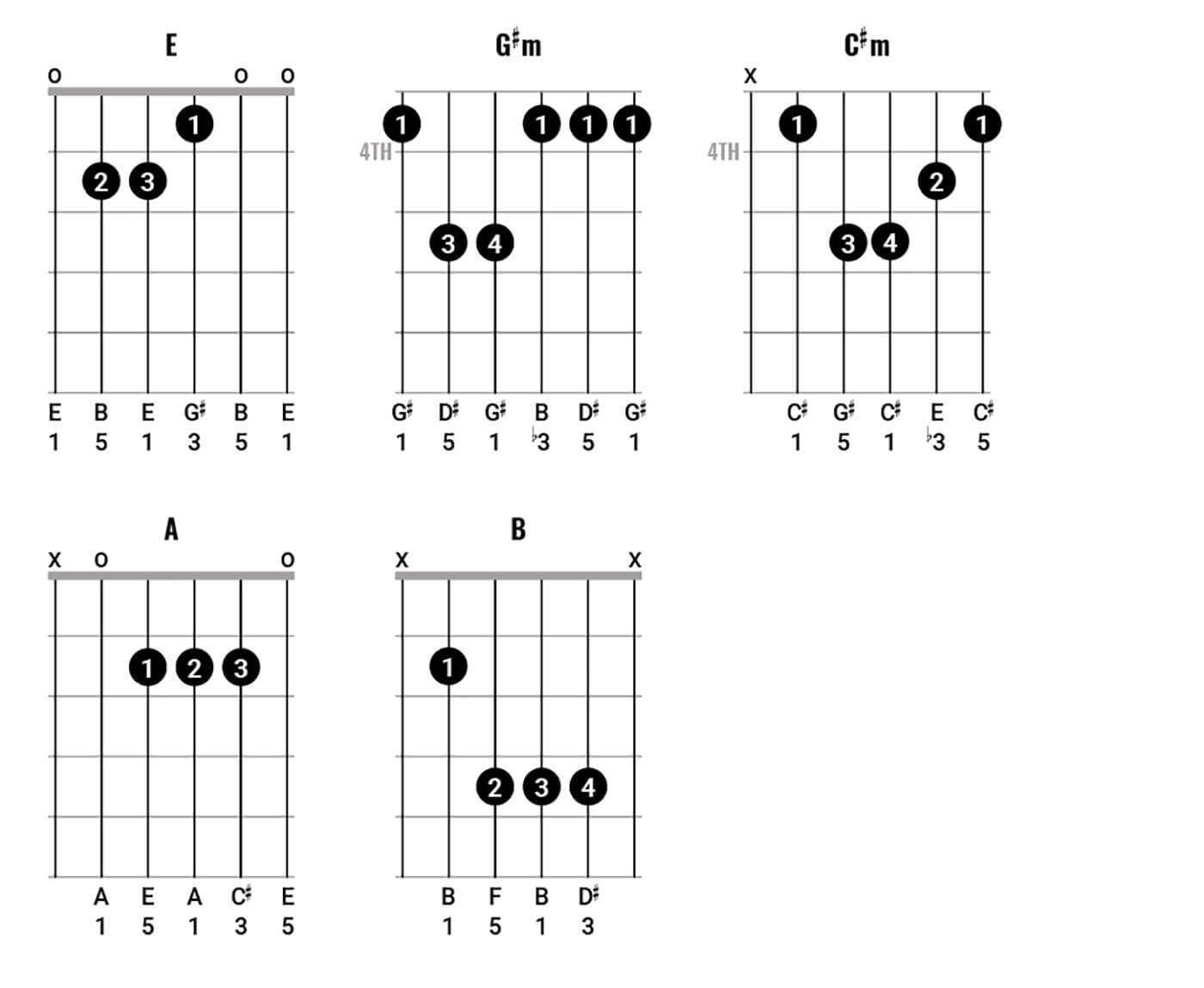