The midpoint of our series exploring the hidden depths of the CAGED system gets its teeth into the most common scale of all – the major scale. 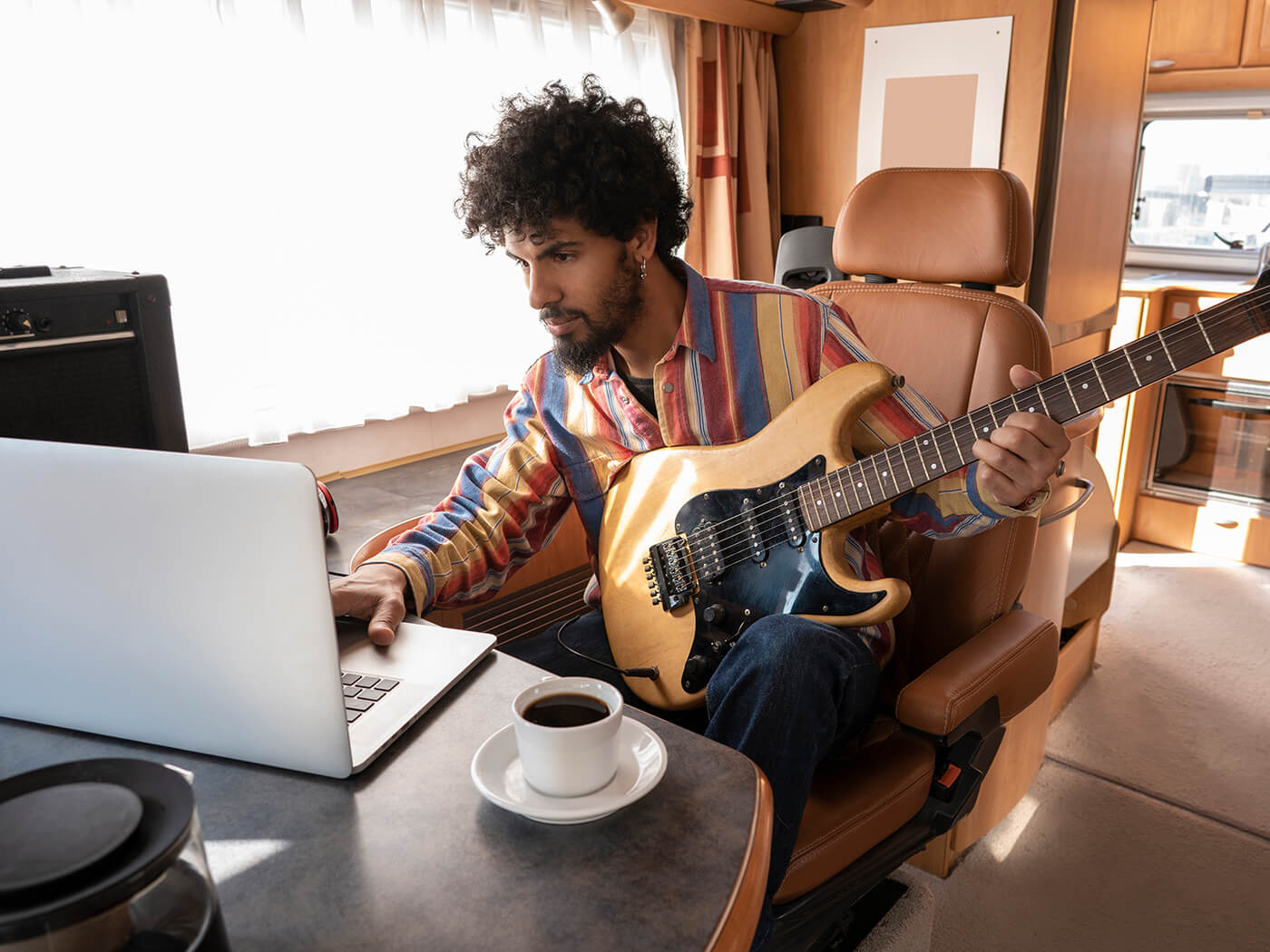 In Part 1 of this series about the CAGED System we discussed triads (three note chords) and in Part 2 the topic was pentatonic scales (five note scales). Now, let’s add another two notes to build the most common scale in western music: the major scale.

If you can play and also understand how this scale is constructed, you’re not far away from learning a whole lot of other stuff as well. A lot of music theory is derived from the major scale and I’ve mentioned it in the previous parts, but now we’re gonna dig a bit deeper and you’ll get an understanding of how you can find any interval in relationship to the major scale while visualizing the CAGED shapes.

So, the major scale contains seven notes within each octave. We have two half steps and five whole steps, this adds up to a total of 12 half steps from the root note up to the same note name, one octave higher. There are a few ways to look at the major scale from a theoretical standpoint – so check this out:

These seven notes are called natural notes as they’re neither sharpened nor flattened – they are also the white keys on a piano or keyboard. Any other major scale will contain one or several sharpened or flattened notes but the scale formula is always the same. As you can see above, the half steps in a C major scale occur between the 3rd and 4th note of the scale (E and F in this case) and between the 7th and 8th/1st note of the scale (B and C). Between all the other natural notes there are one note that can have two different names:

When building a major scale we need a note derived from each of the natural notes, all represented once. No more, no less. However, they can be sharpened or flattened. We can’t have both D♭ and D in the same scale for example. We also don’t want to mix ♯’s and ♭’s. With this in mind, let’s build a major scale starting from A♭ for example: 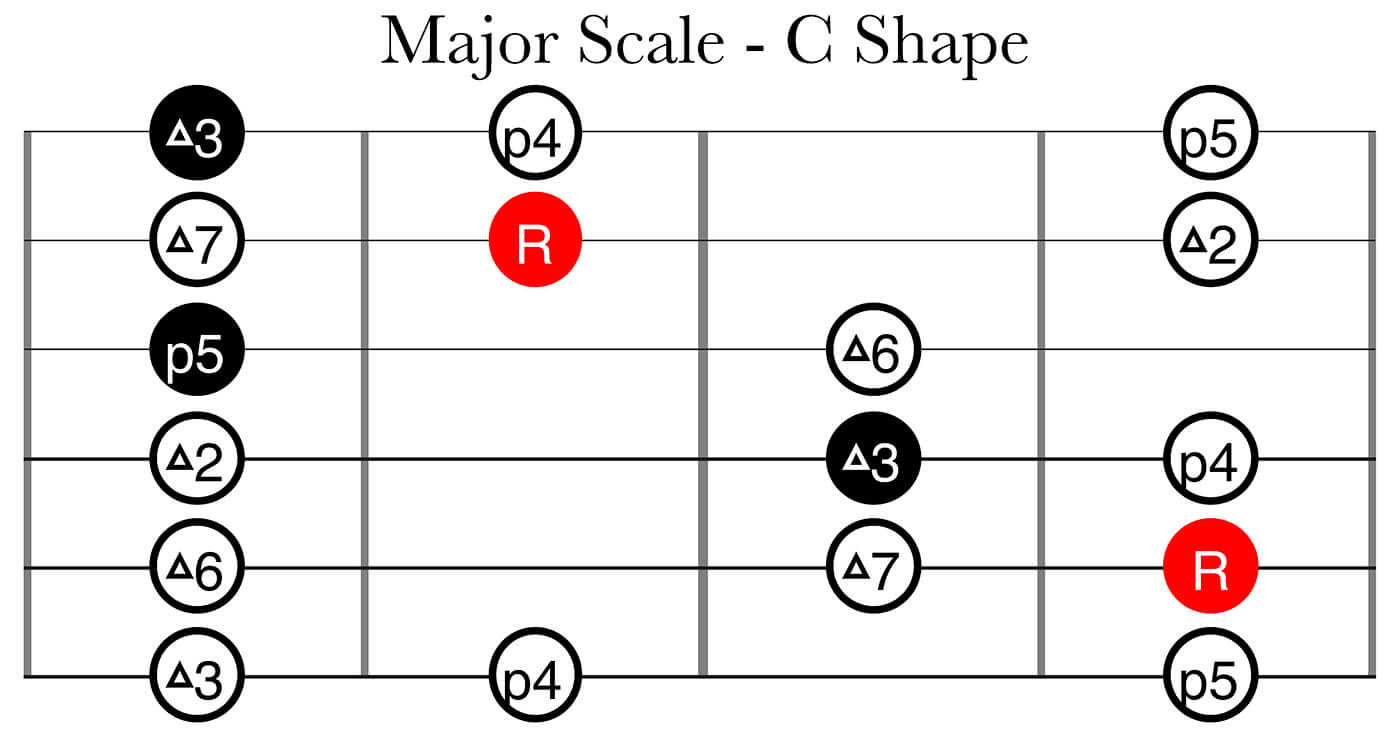 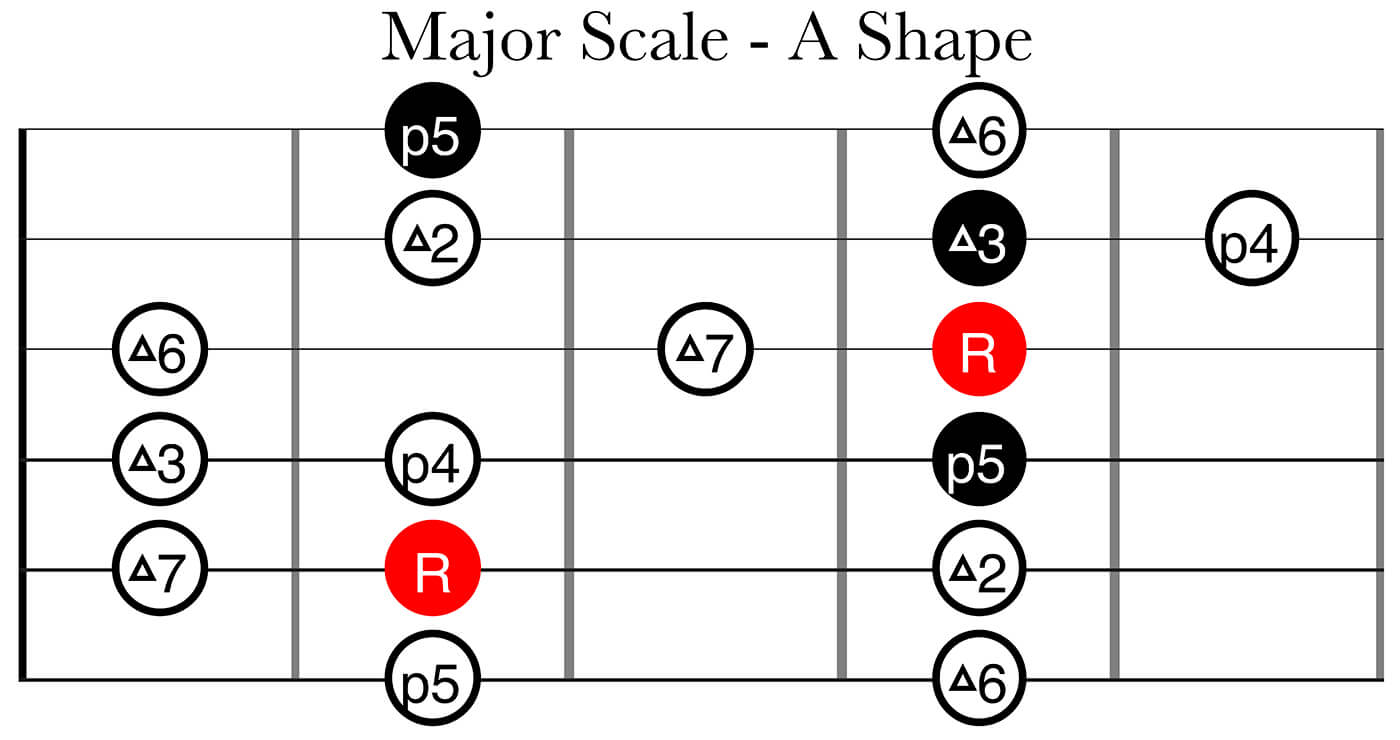 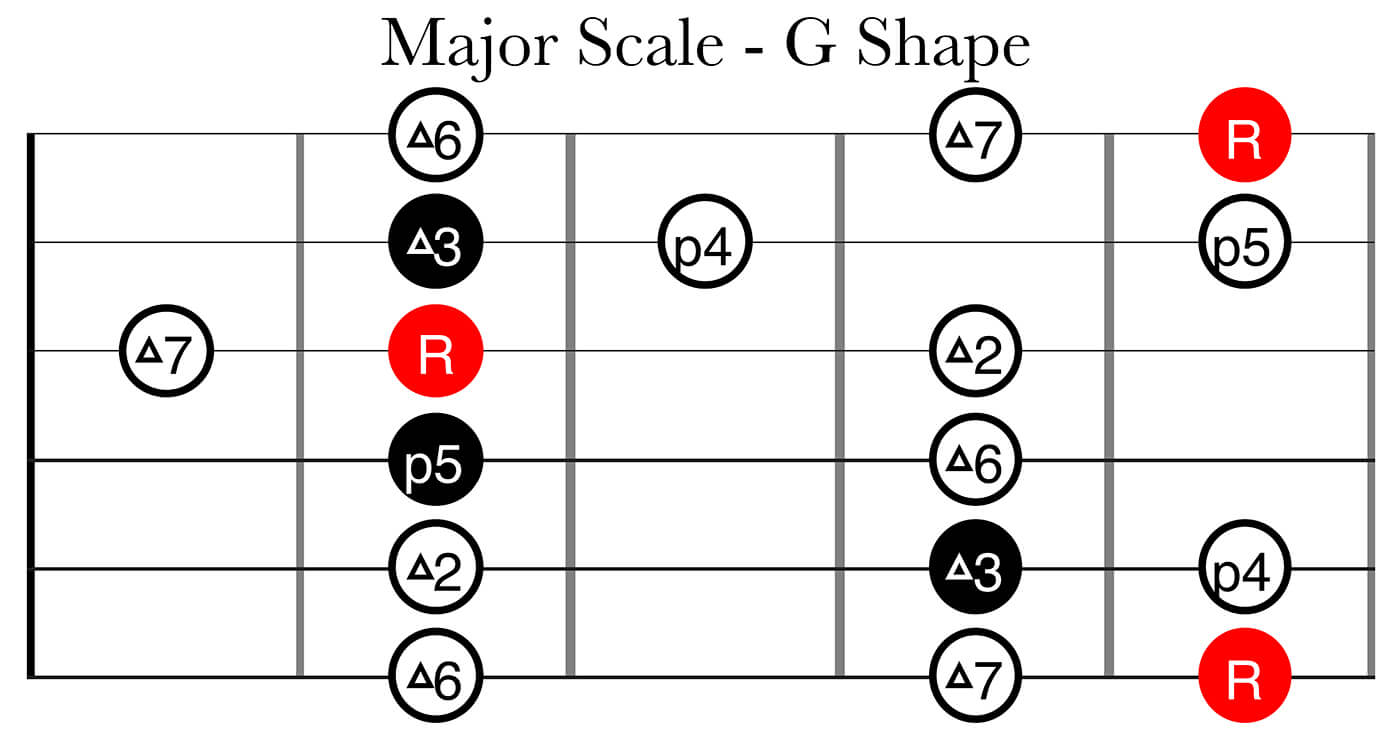 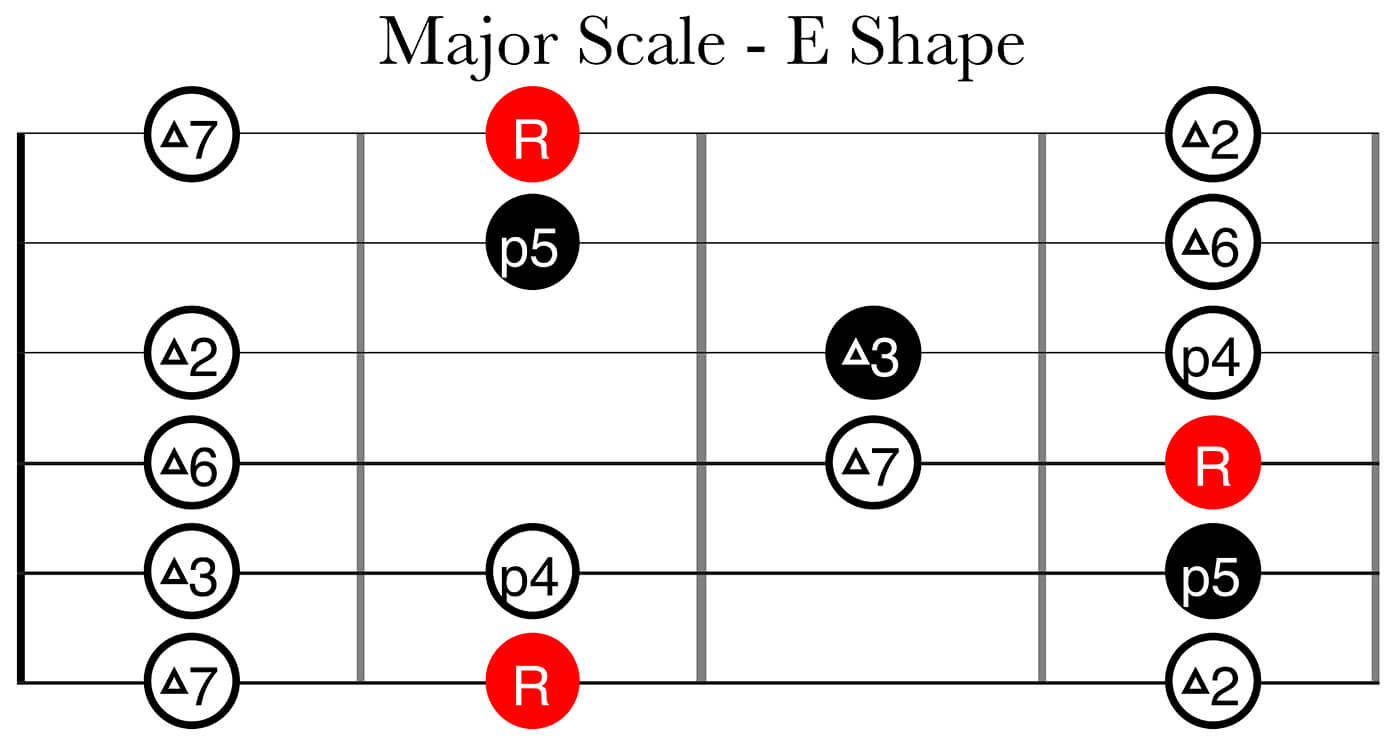 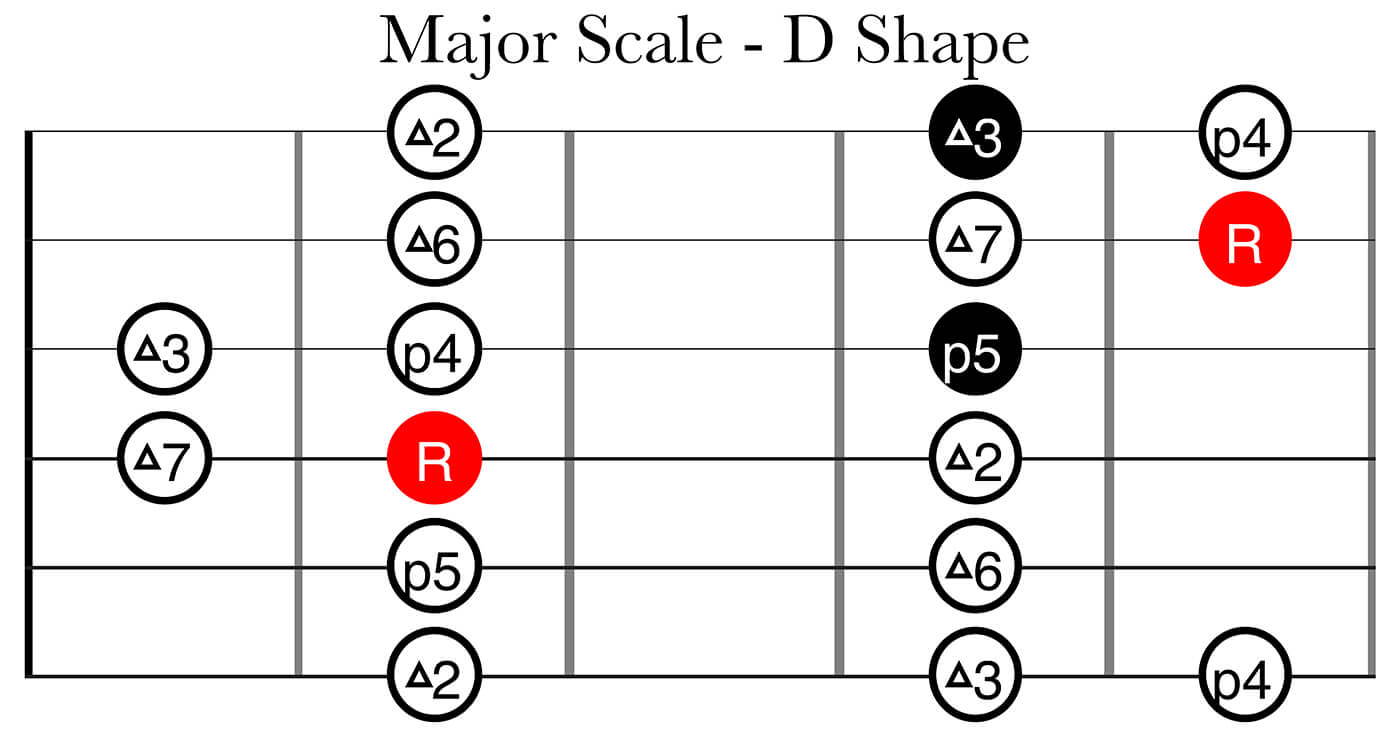 The following diagrams shows how we start with the template of just the triad, just one note per string and three notes per octave – the root, major 3rd and perfect 5th. Then we add two more notes per octave, the major 2nd and major 6th, to get the five note major pentatonic scale – note that there are still no half steps. Finally we add the perfect 4th and the major 7th, this is our full major scale – I outlined these two notes as triangles so you can see clearly where the half steps occur. Where the half steps are placed greatly impacts the sound of the scale, I’ll go into greater detail regarding this in a later part of this article series. 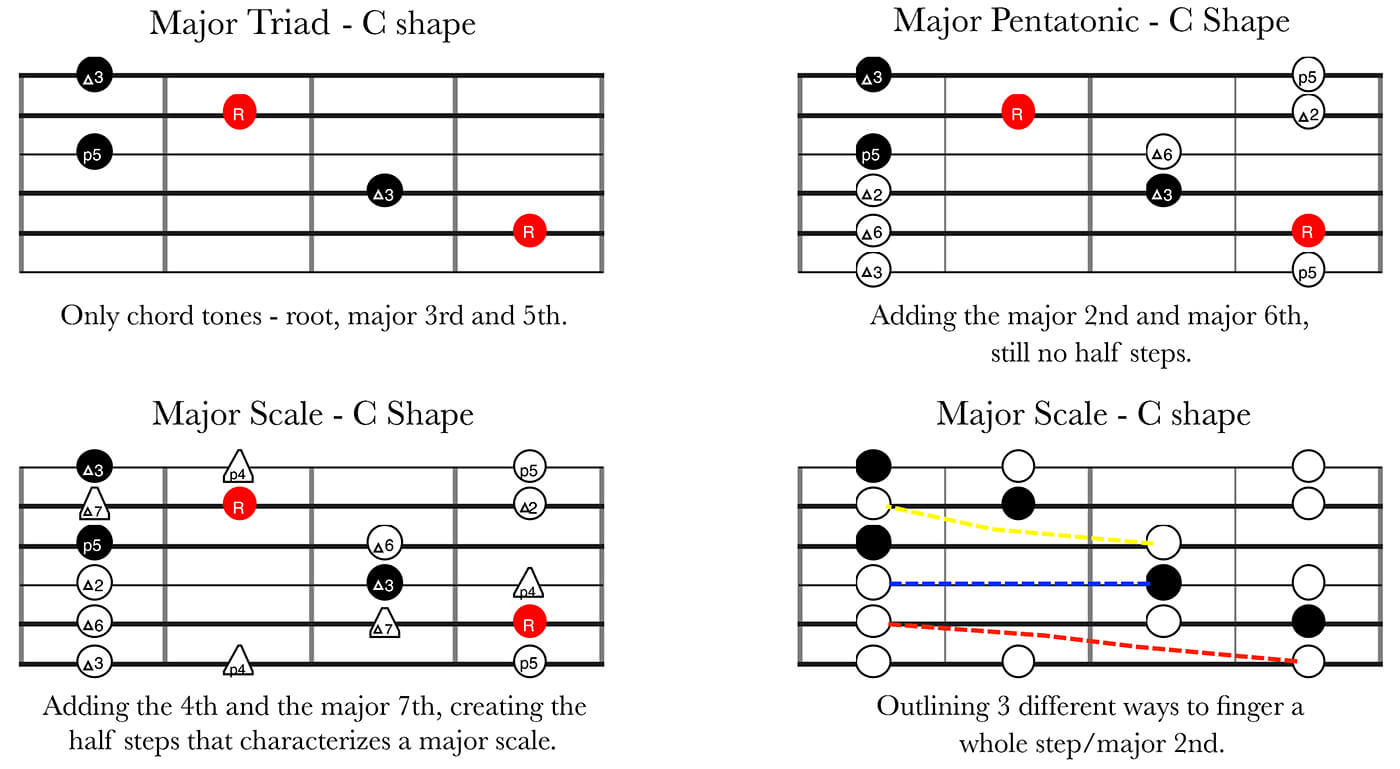 In the lower right of these diagrams I’m highlighting three different ways to finger a major 2nd/whole step:

Now, let’s go beyond the major scale and figure out all the rest of the intervals within an octave. One octave contains twelve notes in total and a major scale, as you know by now, is built from seven of these notes in a sequence of whole steps and half steps. That means we have five gaps (where the whole steps occur) that we could potentially fill in with other notes, this would create the 12-note chromatic scale – that contains only a series of half steps. This is similar to what we did earlier in this lesson but instead of using note names now we focus on the intervals, so it’s not specific to any certain key. 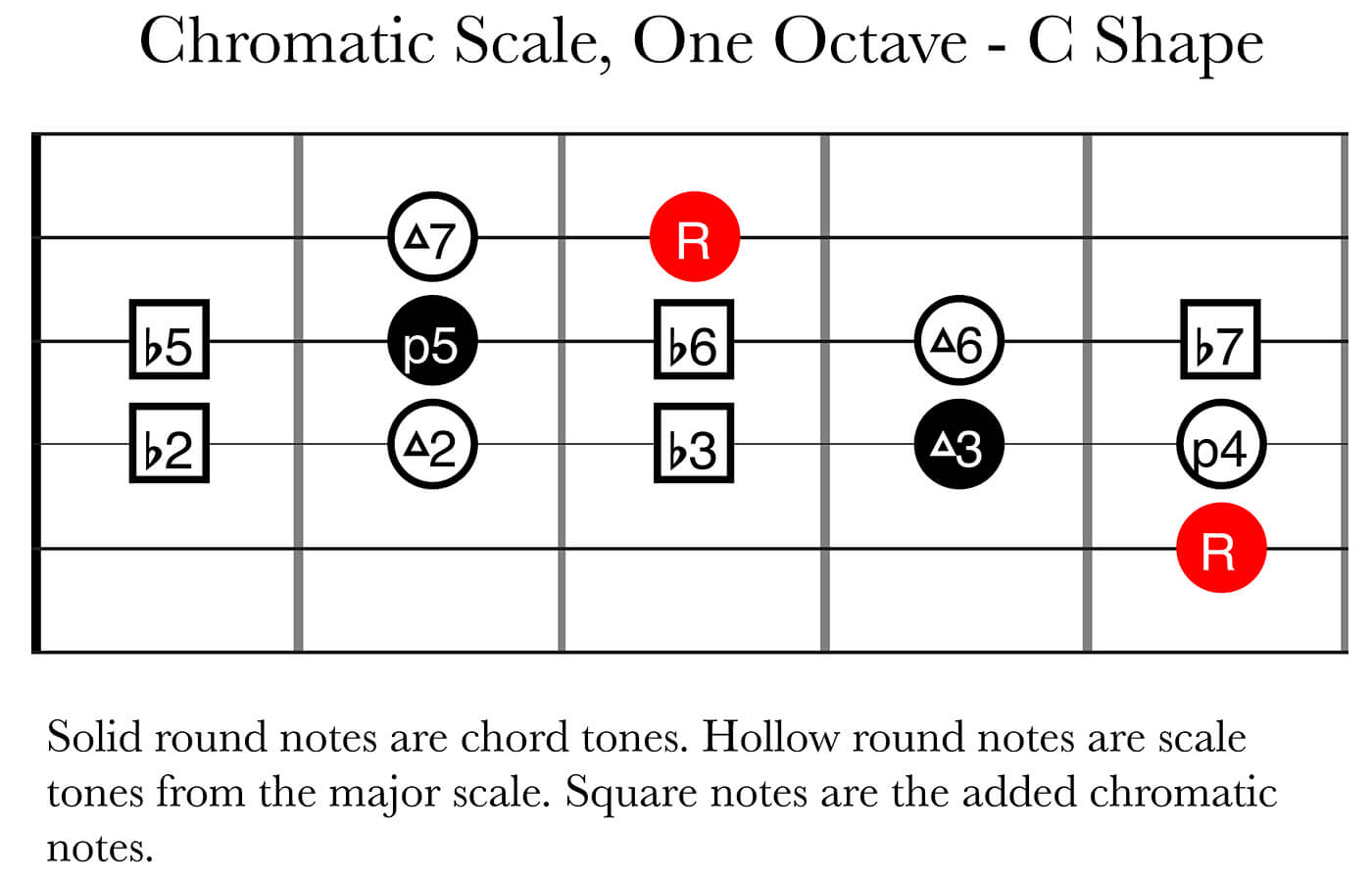 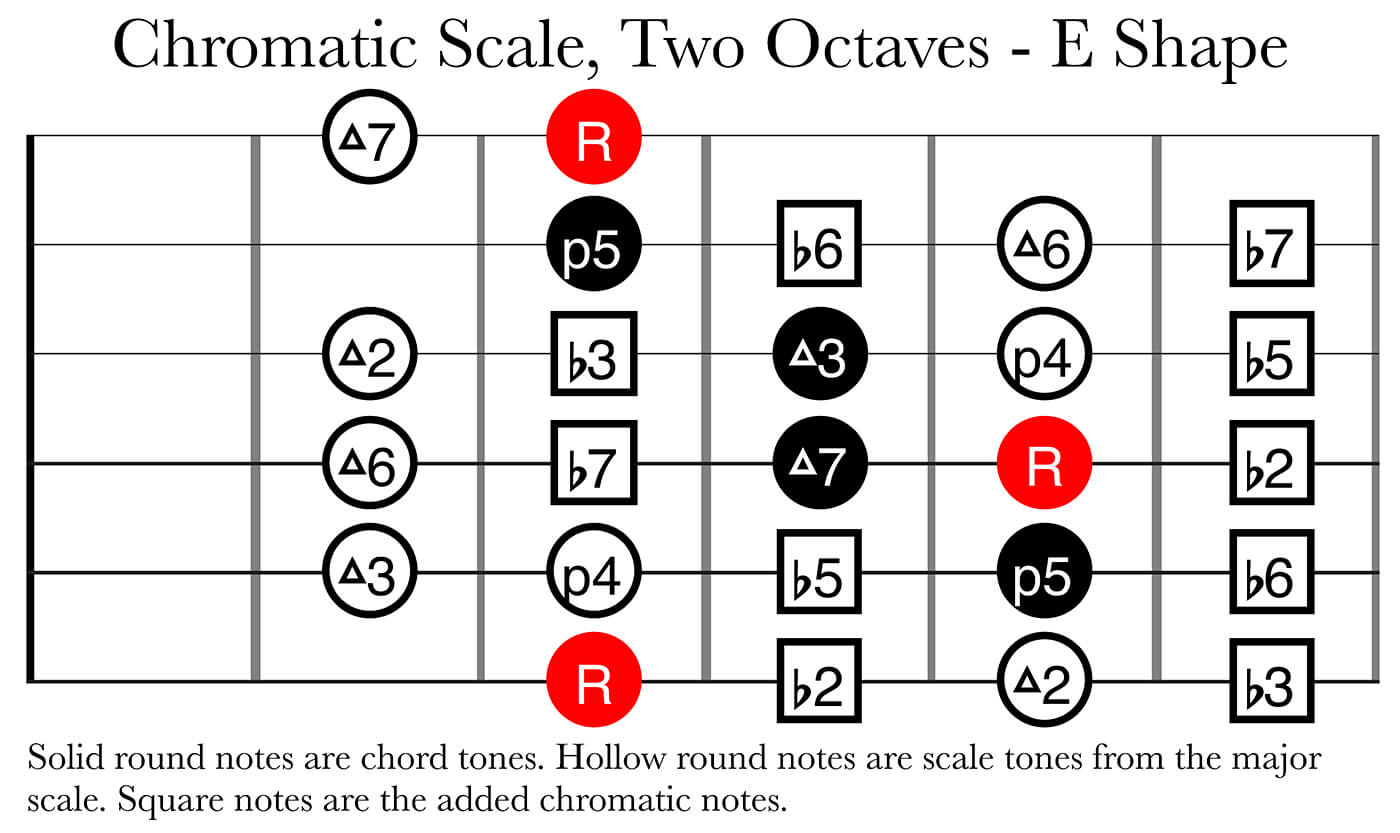 Now study these two diagrams of the chromatic scale in the C and E shape. I haven’t included all the five shapes on purpose because I want you work on your ability to draw connections between the different shapes. Remember that the C and G shapes are closely connected, and that the A, E and D shapes are equally connected. I’ve explained this in earlier articles in this series, so go back and check those out if you are unsure of how this works. I want you to follow this routine when studying these intervals.

Question: How can I finger a minor 6th according to these diagrams?

Follow up question: Does the same fingerings apply to any other string sets?

One important thing is to realize the difference between intervals and scale degrees. Here are a few examples in the key of G:

The interval name just describe the distance between two notes, no matter what context you’re in. However, the scale degrees tells the relationship to the key or root note. Both are important.

This diagram shows the major 6th intervals found within the major scale in the G shape. If you take the higher of each pair of notes and lower them an octave, you’ll find all the minor 3rds within the major scale. I highly encourage you to explore the CAGED shapes in this way, it really helped me to unlock the fretboard.

This is not easy and it will take some time to get a grasp on, but a lot of the patterns are moveable and when you start seeing connections and similarities between the different shapes you’ll get a MUCH deeper understanding of the fretboard and how’s it connected. Good fretboard visualization is incredibly important to become freer on your instrument and communicate the musical ideas you hear in your head.