We take a look at chord sequences inspired by Alex Turner and Jamie Cook, and find that they tend to be anything but predictable.

Many Arctic Monkeys songs are riff-based, and one way to add power to a riff is to slide around a five chord instead of using single notes.

In figure 1, for example, the first three chords are played in one bar – try it with a triplet-style three against two rhythm. Play this twice and then answer it with C5, E♭5 and F♯5, also played twice, in the same rhythm. The F♯ chord seems very intense in this situation because it is built on the augmented fourth above the keynote C, which is one of the most dissonant intervals. Intense and, as we mentioned, unpredictable. 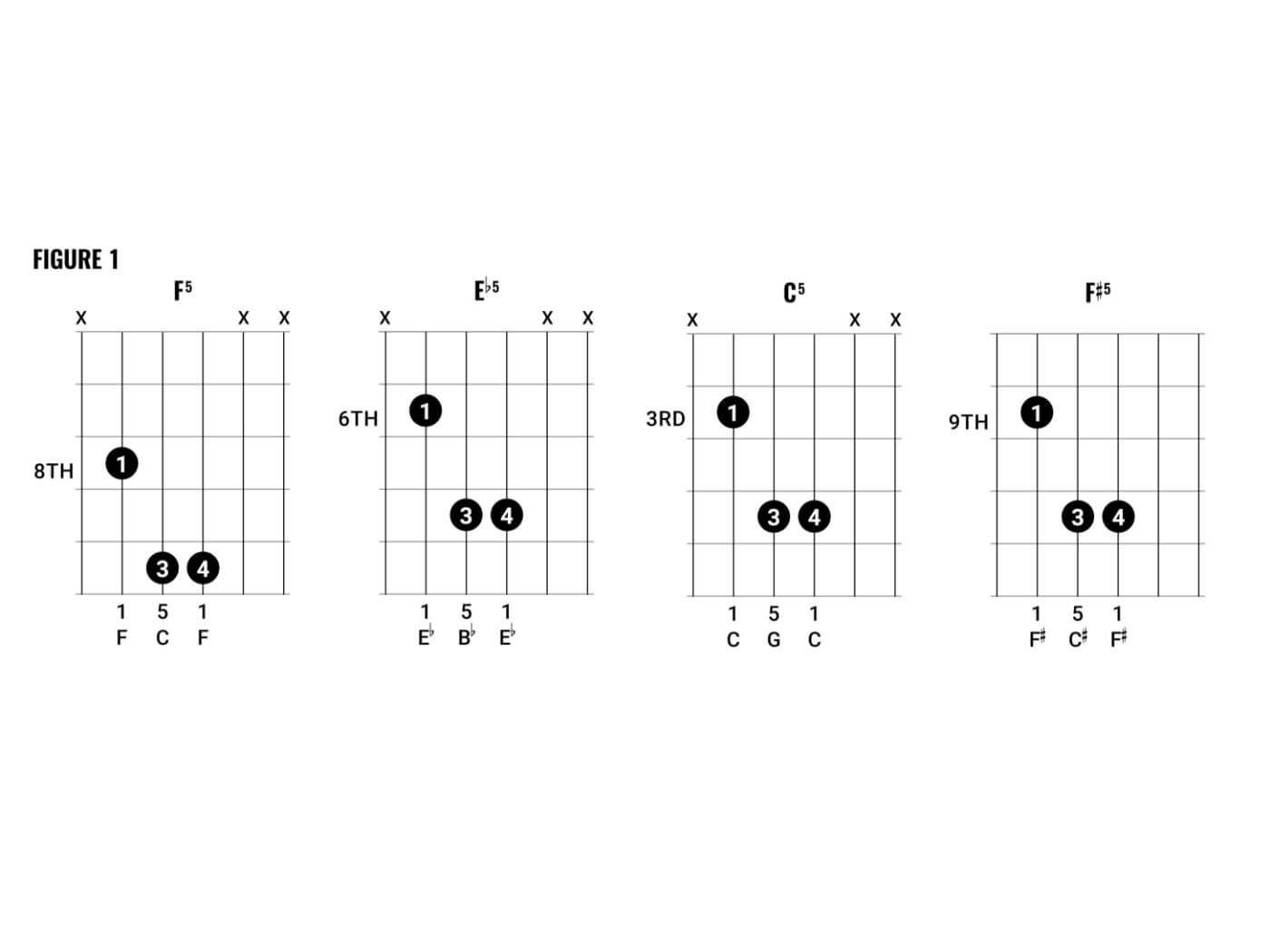 With two six-strings in the lineup there are often single notes on guitar one mixed with chords on guitar two. However, in something like figure 1, we would envision both guitars playing the same riff in unison, mixed left and right for added weight. If you are trying to recreate this, aim for a different sound on each guitar; thick and dark on one, thin and bright on the other.

Figure 2 introduces some strummed, clean chords. Play the D and C♯m in bar one and let the Bm ring for all of bar two. This part represents a verse, and might well seem to be in the key of either D major or B minor.

However, for the ‘chorus’ things are neither dynamically loud nor heavy, we carry on with the clean chiming chords and play A, C♯m, Bm and E, one bar per chord. If you like, you can try slipping in a C minor passing chord between the C♯m and Bm. You might be surprised to learn that this sequence is actually in A major. 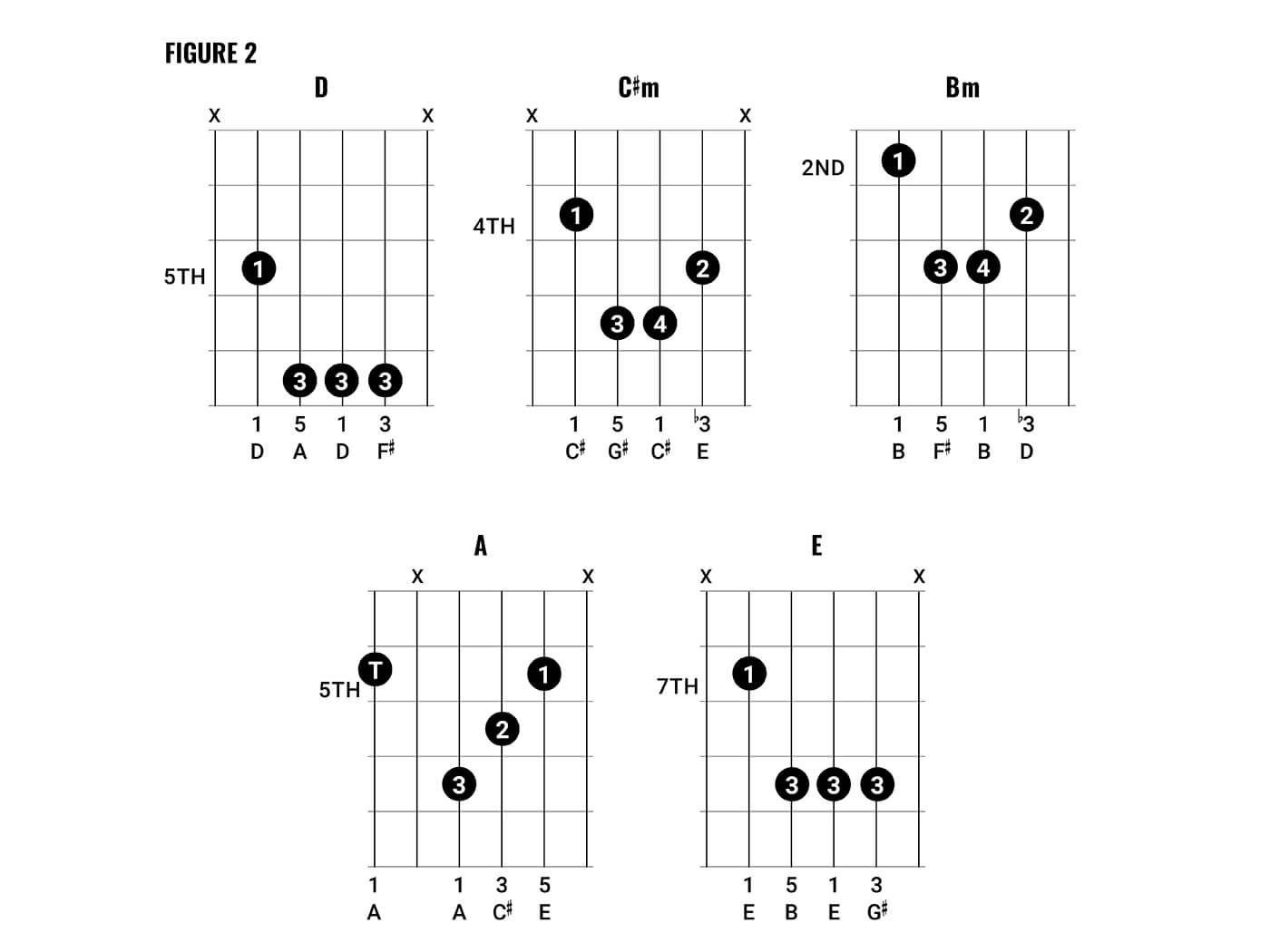 A feature of Arctic Monkeys style is the placing of “stab” chords on beats two and four, often while the other guitar and bass play a unison riff, or sometimes to add a spiky rhythm to strummed chords.

Figure 3 is an example of this – it is played using downstrokes on beats two and four with the fret-hand fingers released immediately after each stroke to create a staccato effect. Just release the pressure, don’t actually take your fingers off of the strings and you will stop the sound instantly. Notice that the voicings are all quite high, being placed on the top four strings to help them cut through. 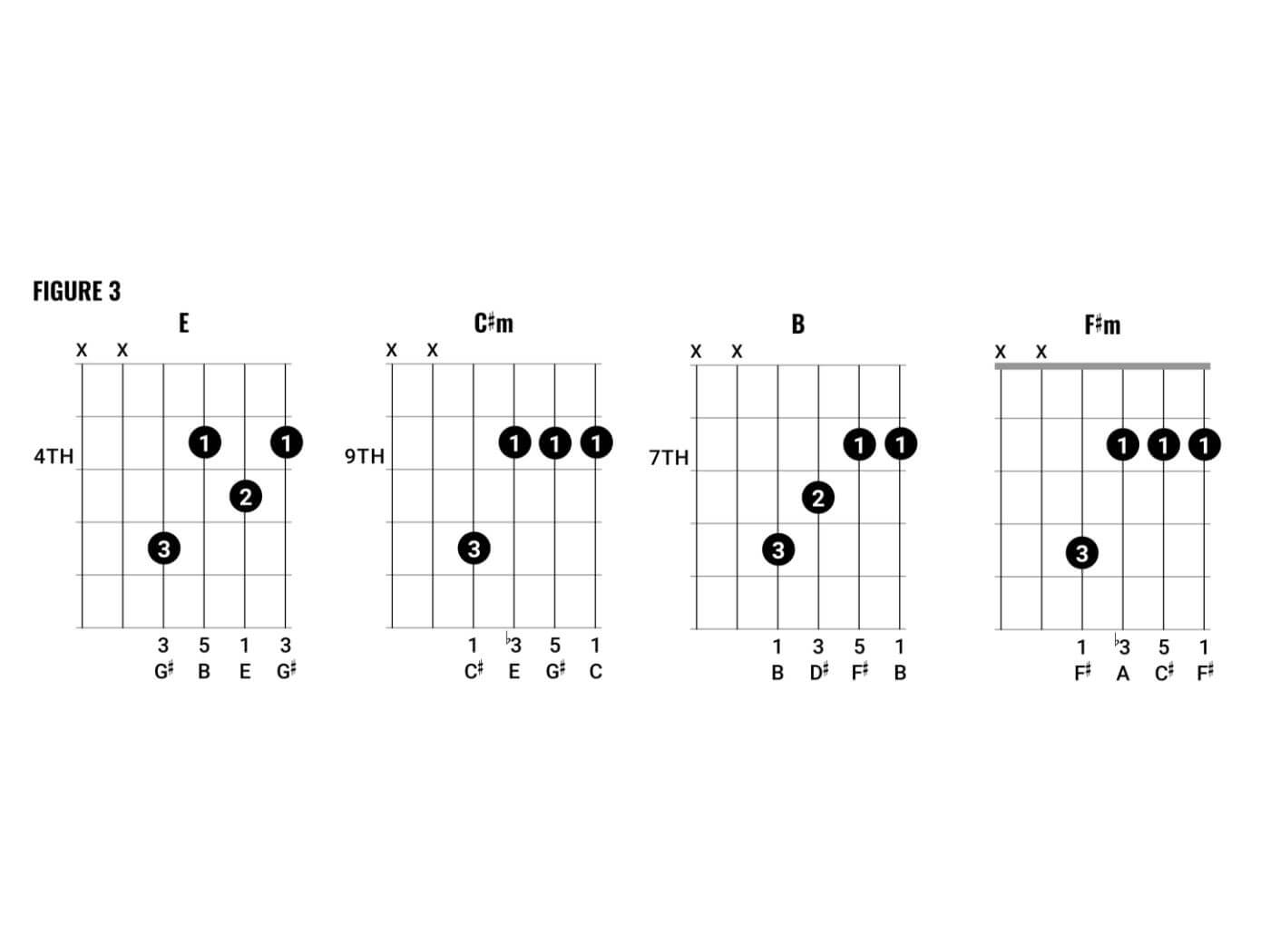 The first chord is technically E/G♯, or “E with G sharp bass”, but if you had the bass playing the low E, the root note of this chord is effectively E, and so we have left it described as an E chord. This chord gets a bar to itself, but the C♯m and B chords share a bar. Then play a bar of F♯m and back to B and you should have a four-bar sequence to loop around.

Figure 4 introduces a riff based on three-note chords. The F minor chord is played at the start of the bar and immediately slid up one fret to F sharp minor. Strum this chord gently for the rest of the bar and into the second bar, adding the F♯m7 and F♯m6 on beats three and four to create a two-bar pattern. Take it slowly, sit back and let it groove as you repeat four or eight times. 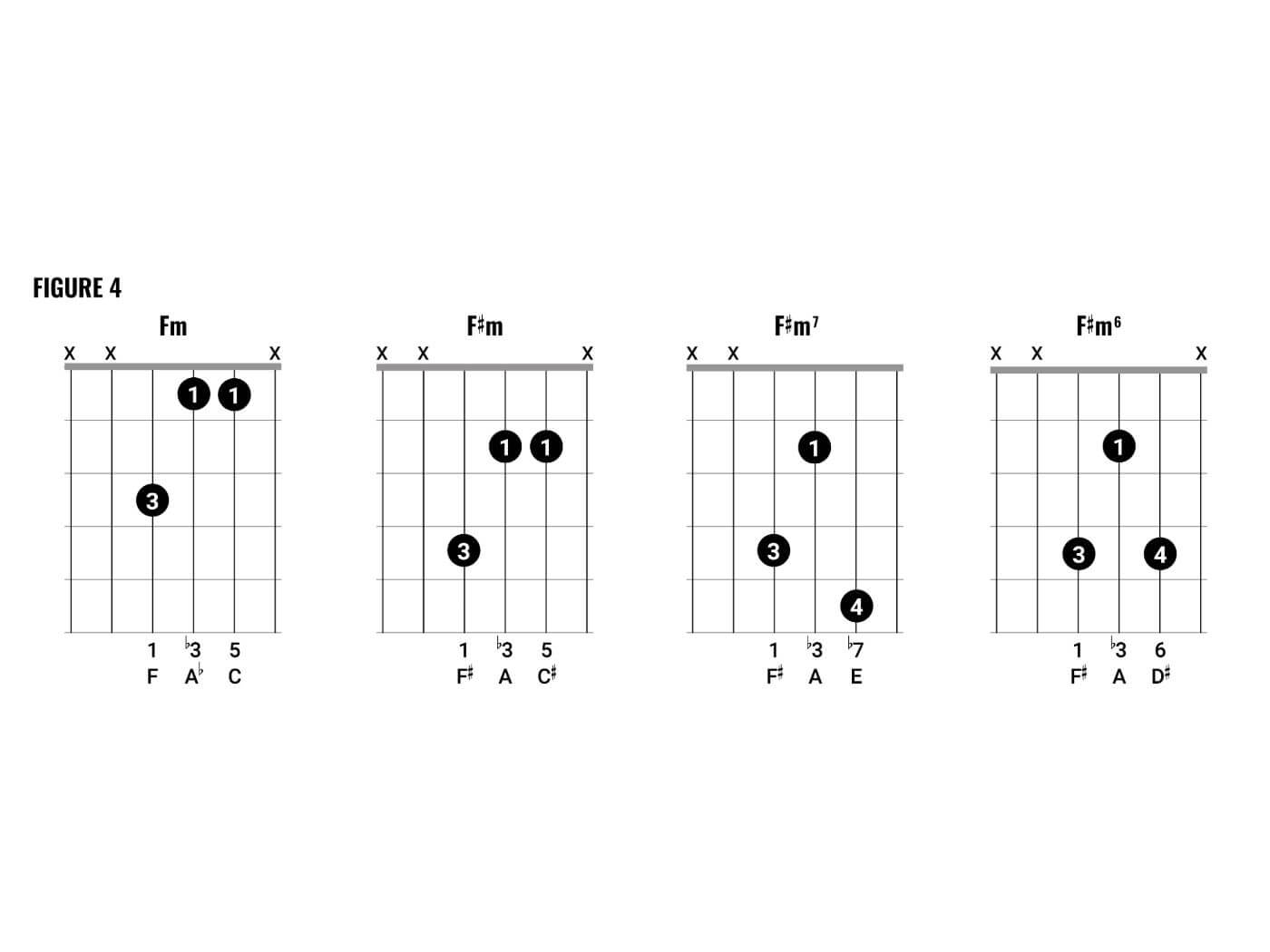 Figure 5 is our idea of a chorus to figure 4, and brings about another aspect of the unexpected that we mentioned earlier. Strum the first four chords, one bar each and repeat. Does the C chord seem a little strange in context?

In theory terms, it is what is known as a “false relation”. F sharp minor, A major and D major are closely related as all three chords can be found in the keys of both A major and D major. C major cannot be found in either of those keys and yet strangely, it works very effectively to return to F sharp minor, mainly because it is so ‘out there’ that our ears crave the return to the chord with which we started. 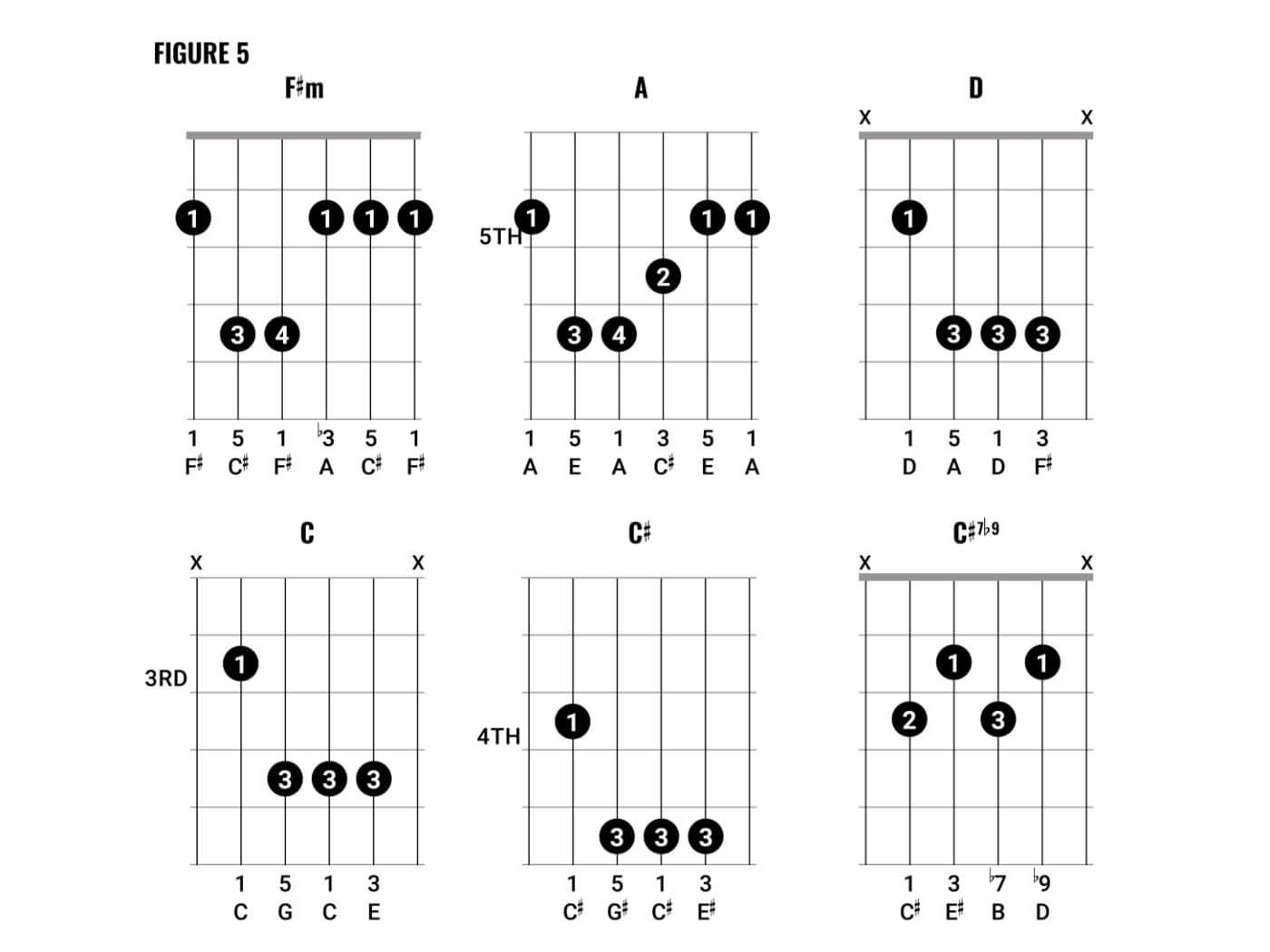 The last two chords in figure 5 are included as an experiment. These are harmonically correct, but relatively ordinary sounding alternatives to the C major chord. C♯ is chord V, the dominant, to F sharp minor and tends to lead naturally to it; C♯7♭9 is the extended dominant chord which has the same effect but adds an almost classical quality. Try these alternatives and see which you like most.