We head into psychedelic territory in our second part of our John Lennon lesson, as we explore the chords and sequences used by a man spreading his creative wings.

Last month we looked at the way that John Lennon’s rhythm guitar style and chord vocabulary provided such a consistently brilliant bedrock for the Beatles as they exploded from the bars of Hamburg into the glare of global superstardom.

This time around, we’re going to examine how his choice of chords, and the ways in which he used them evolved as the band rapidly became a more psychedelic and experimental outfit, and also touch on how things continue to change as he moved into his post-breakup solo period.

Enjoy playing around with these chords and we’ll see you next month with more Beatles-inspired harmony.

As the Beatles’ career progressed, keyboards began to feature more and more in their arrangements. Here, we’ve been inspired by the harmony implied by a keyboard intro. Play each chord starting with the bass note and then add an arpeggio. The dreamy, aimless quality of this chord sequence comes straight from the psychedelic era, and the use of slash, minor seventh and augmented chords demonstrate Lennon’s ear for an interesting sequence.

A later development in Lennon’s song writing was the use of key changes within songs. Here, we’re inspired by a guitar intro, and you should try playing these chords as short ‘stabs’, releasing the pressure from the fret hand fingers after each downstroke. We’re in the key of D minor, but by holding a long G chord you can be ready to modulate (or change key) to C minor for the next section.

This sequence can be looped around to create a four-bar pattern. Start with the bass note of each chord and follow it with a downstroke strum, and you could also try adding a quirky waltz feel by playing it three beats to the bar, adding a second downstroke. If you find it hard to hold three strings down with your third finger for the B♭ chords, use fingers two, three and four instead. 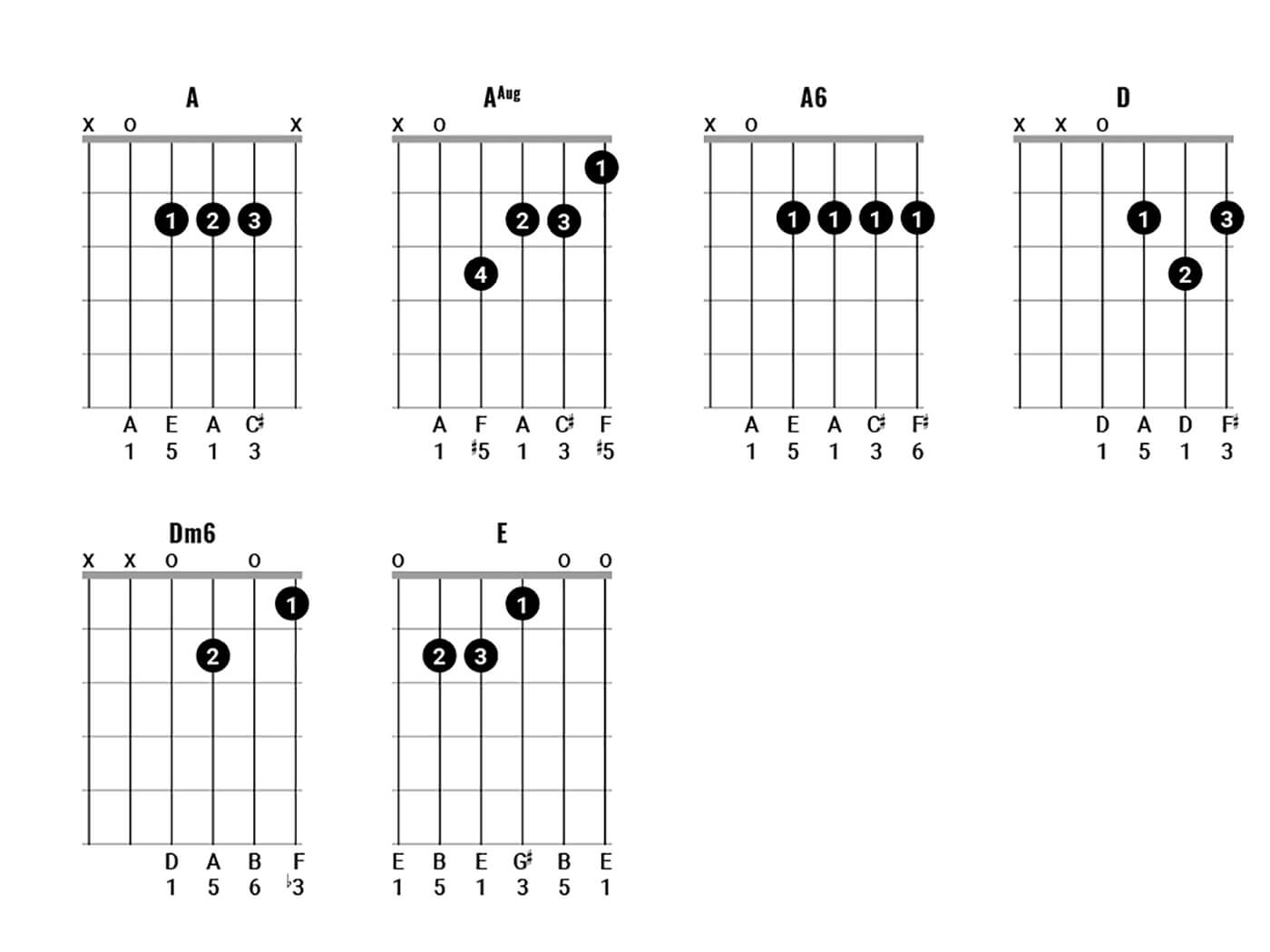 This one sounds best strummed on your acoustic, and like figure 1 features an augmented chord. The idea is to go back to A augmented after you play A6, giving you a four-chord sequence. Then you can move on to the D and D minor sixth chords if the fancy takes you. We are in the key of A major, and D is chord four, usually written IV. Following chord IV with IV minor is almost a Beatles cliché – it’s not like it’s in every song, but you might start to recognise this characteristic sound when you hear it. The E major chord will send you back to the beginning of the sequence.

Rod Fogg is a London-based guitarist, teacher and writer. He is the author of The Ultimate Guitar Course (Race Point 2014), the Electric Guitar Handbook (Backbeat, 2009) and contributed to bestseller The Totally Interactive Guitar Bible (Jawbone Publishing, 2006). Find out more at rodfogg.com.