35 years on from The Smiths’ 1984 debut album, the influence of Johnny Marr’s guitar playing is hard to exaggerate. We take a look at the chords that make up his captivating chime and jangle. 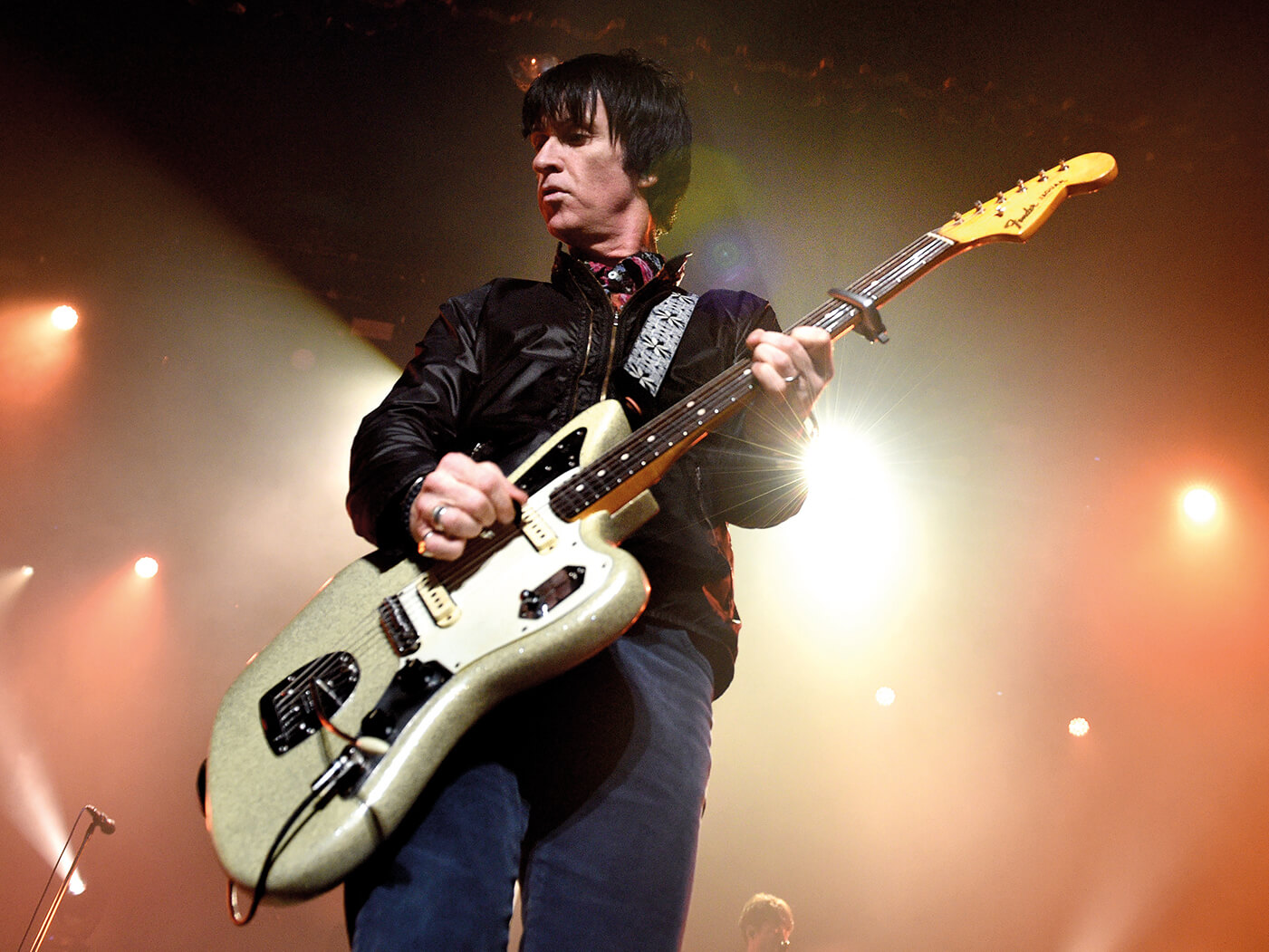 In 1984, Johnny Marr’s guitar playing stood out at a time when many felt pop had become bland and overproduced. Full of chiming and jangly chords, mixed with sustained arpeggio riffing, his playing has come to define the era.

In this instalment of Chord Clinic, we’re focusing on strummed chords; in the next, we’ll take a look at the arpeggios which are an essential part of his style. Figure 1 kicks off with four chords – each of which is meant to be held for a full bar, in the style of an intro. Choose a bright, clean sound on your electric, add a touch of chorus and a gentle waggle of the whammy bar as the chord dies away. Play on the first beat and let it ring.

You could say that these chords are all in the key of D major, and represent chords IV, I, VI, and V. However, as we will see later, the chords you use for this type of intro don’t necessarily have to be harmonically connected – it’s more about the colour the chord creates and the linear movement of the notes on the top string.

Added ninth, major seventh and other added note and suspended chords are an important part of this style. Try rearranging the order of the chords, or slipping in a few alternatives, such as C major seven, or E minor nine.

If figure 1 is an intro, then figure 2 is the verse. Pick an easy tempo and play through the chords, two chords per bar. Don’t necessarily play all six strings the whole time; start with a big downstroke, and then just concentrate on the higher notes of the chord, emphasising the interval that occurs between the note D on the second (B) string and the open first (E) string.

This is present in the first three chords and is resolved to C# in the A major chord. Feel free to repeat this sequence as often as you like – twice, or maybe even four times.

Continuing with our song-like structure, we need a pre-chorus – something which builds towards a chorus. Enter figure 3, where each of the chords gets strummed for four beats and the passage gradually grows in intensity.

Notice that the F#m11 chord has the thumb wrapped over the neck to hold the sixth (low E) string at the second fret, and that the G6 and Aadd9 chords resemble a common barre chord shape, but without the barre, so the top two strings ring open.

Almost every chord we’ve played so far has had an open sixth (E) string, and open strings are often doubled or sounded with another note which is close in pitch – another essential part of the style. Figure 4 is the chorus, where we need some fast 16th-note strumming, alternating between the two voicings of G6 in one bar and the A and A6 chords in the next bar. For maximum jangle, avoid the lowest two strings. In fact, you could mute the A string using the tip of your third finger, in case you get carried away and catch it with the pick.

At this point, you could head back to figure 1 and play the whole piece again or head for figure 2 and repeat the verse – pre-chorus – chorus structure. Incidentally, a capo can work a strange magic on the guitar; if you have one, try the whole thing again with a capo at the second fret – everything somehow seems much brighter.

Figure 5 demonstrates that not all Johnny Marr’s playing involved extended chords. The idea is to play one bar of A minor, with the next two chords sharing the next bar. Repeat and repeat, and hopefully, you will find a hypnotic quality emerging.

Of course, it might help if you could invent some miserabilist teenage lyrics to go with it. Incidentally, this one works well on acoustic and should also be tried with a capo at the second fret.

In figure 6, we’re returning to the idea of our opening chords, this time with a set of chords which are not so clearly related or found in any single key. When you come to play the Aadd9 chord, lean finger one back a little so that it touches the open third (G) string as we do not want this string to sound. See if you can create some sequences of your own by rearranging the chords in these examples. Go forth and jangle!

Read the second part of this lesson here.