Following on from part one of our Johnny Marr chord sequence workout, we take a look at the arpeggios that form such an essential part of his guitar style.

Johnny Marr’s playing can be sparse yet harmonically complex, and seemingly simple but rhythmically inventive. This is often achieved through note choices, including the selection of open strings to sound against held notes, and the rhythmic choices when playing arpeggios, for example, grouping notes in mixtures of threes and twos to play across the rhythm of the bar.

Figure 1 demonstrates these methods with two three-note G major chords, both made slightly unstable by the presence of the fifth, rather than the root, in the bass. 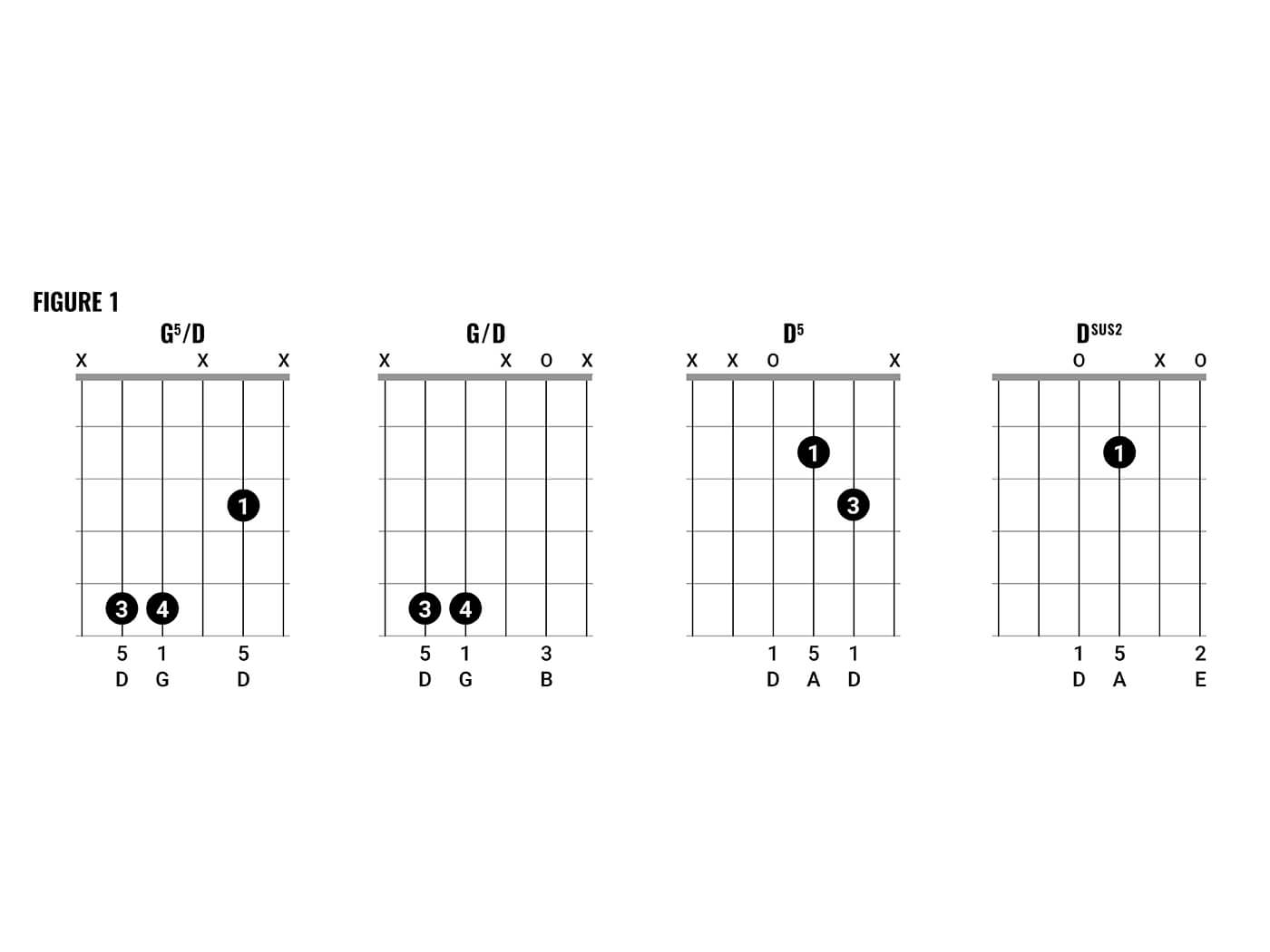 Play the notes of the first chord, from low to high, followed by the notes of the second chord, and then repeat just the lower two notes – let them all ring as much as possible. This should give you a rhythm like ‘123,123,12’. You should also hear a melody emerging from the notes you are playing on the second (B) string.

This is where the rhythmic complexity comes in, as these notes are falling on the second beat and the ‘and’ after the third beat, contrasting with the underlying 3-3-2 rhythm. Repeat, and then try the same approach with the two D chords, where you should similarly hear a melody emerging between the second and first (B and E) strings. Choose a bright, clean tone and if you can, add a touch of delay and chorus. Ideally, use a pick – but you could also use thumb, index and middle fingers, starting with the thumb on the bass note. 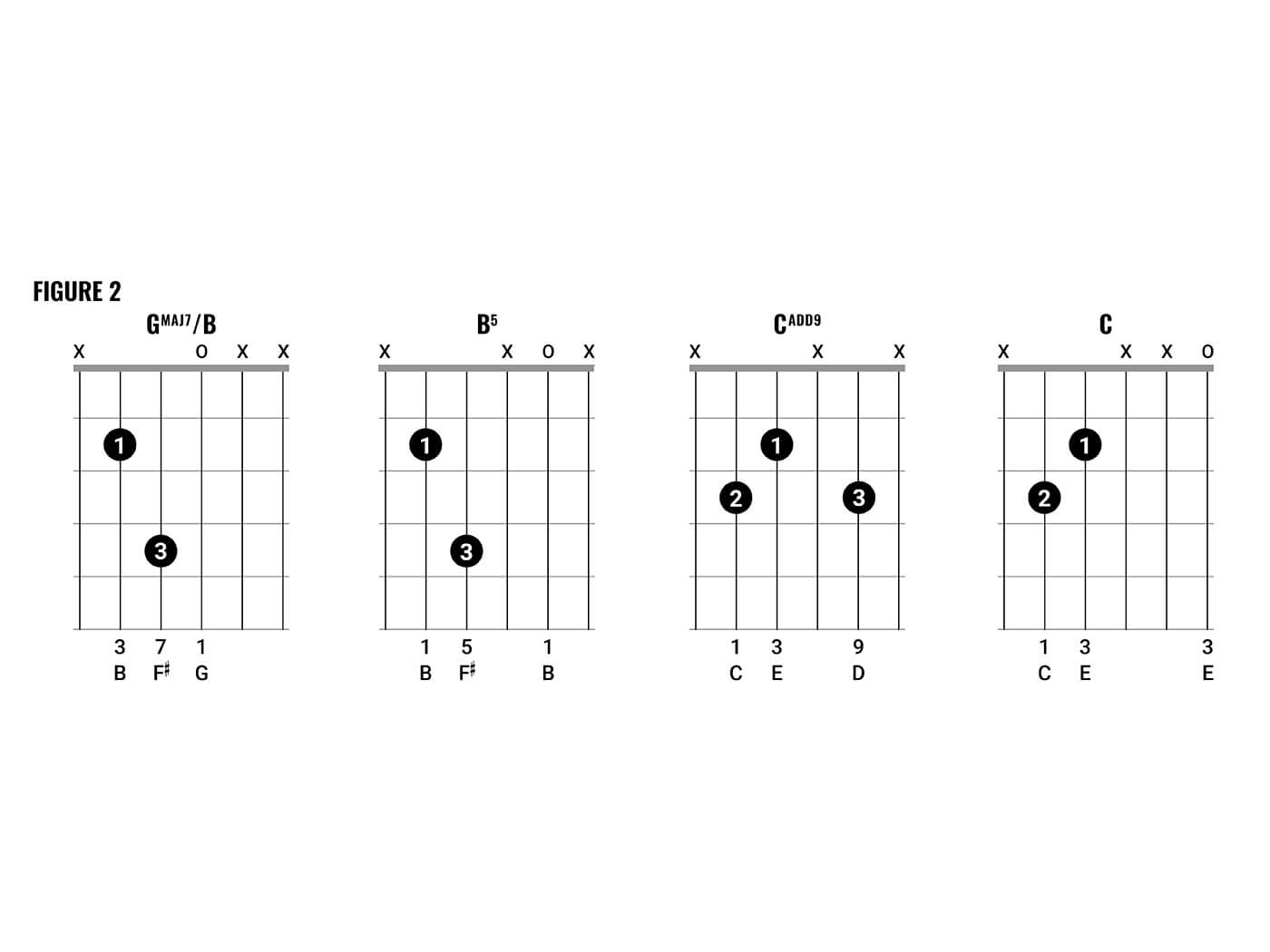 In figure 2, stay with the same eight-count picking pattern but play all eight notes on one chord, one chord per bar. Notice how the tension between the F# and G in the G major seventh chord is resolved by changing to a different open string in the B5 chord, and that the B bass note goes from being the unstable third in the bass to the stable root note.

Talking of harmonic complexity, we have a major seventh, a V chord, an added 9 and a plain major chord all achieved with carefully chosen three note voicings. Figure 2 follows on from figure 1; you can loop the two sequences around to make an eight-bar chord sequence. 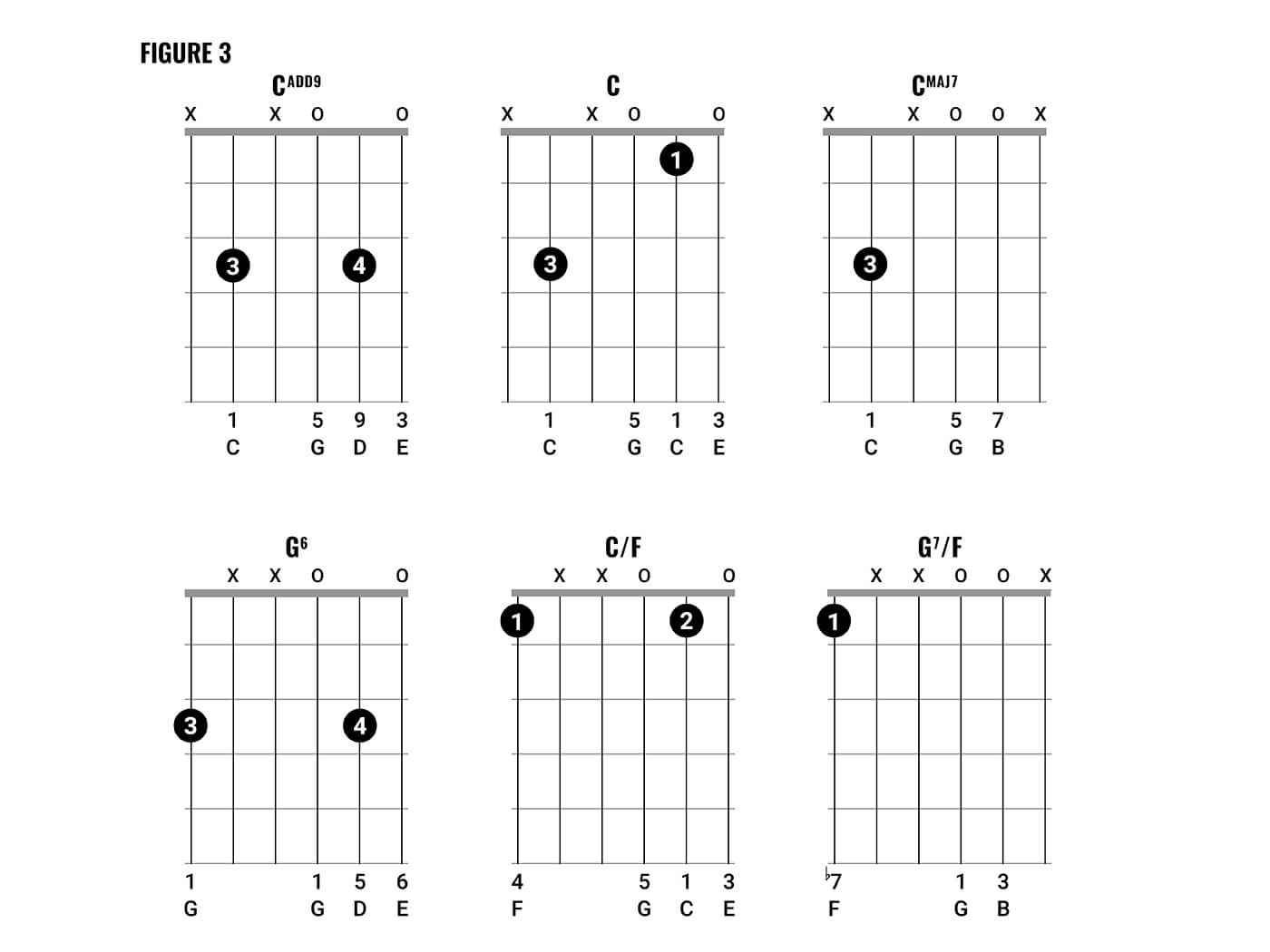 Figure 3 uses the same ‘123,123,12’ picking rhythm, but it might be better to finger-pick this one as we need the note on the second (B) string to sound at the same time as the bass note; then pick the open third and first (G and E) strings. This way, the first three chords would make up one bar of music while the second three chords would be in the second bar.

Rhythmic interest comes from the way the melody emerges on the second (B) string, while adding in the bassline adds an ambiguous quality. Played round and round over eight bars, this could be the backing to a verse. 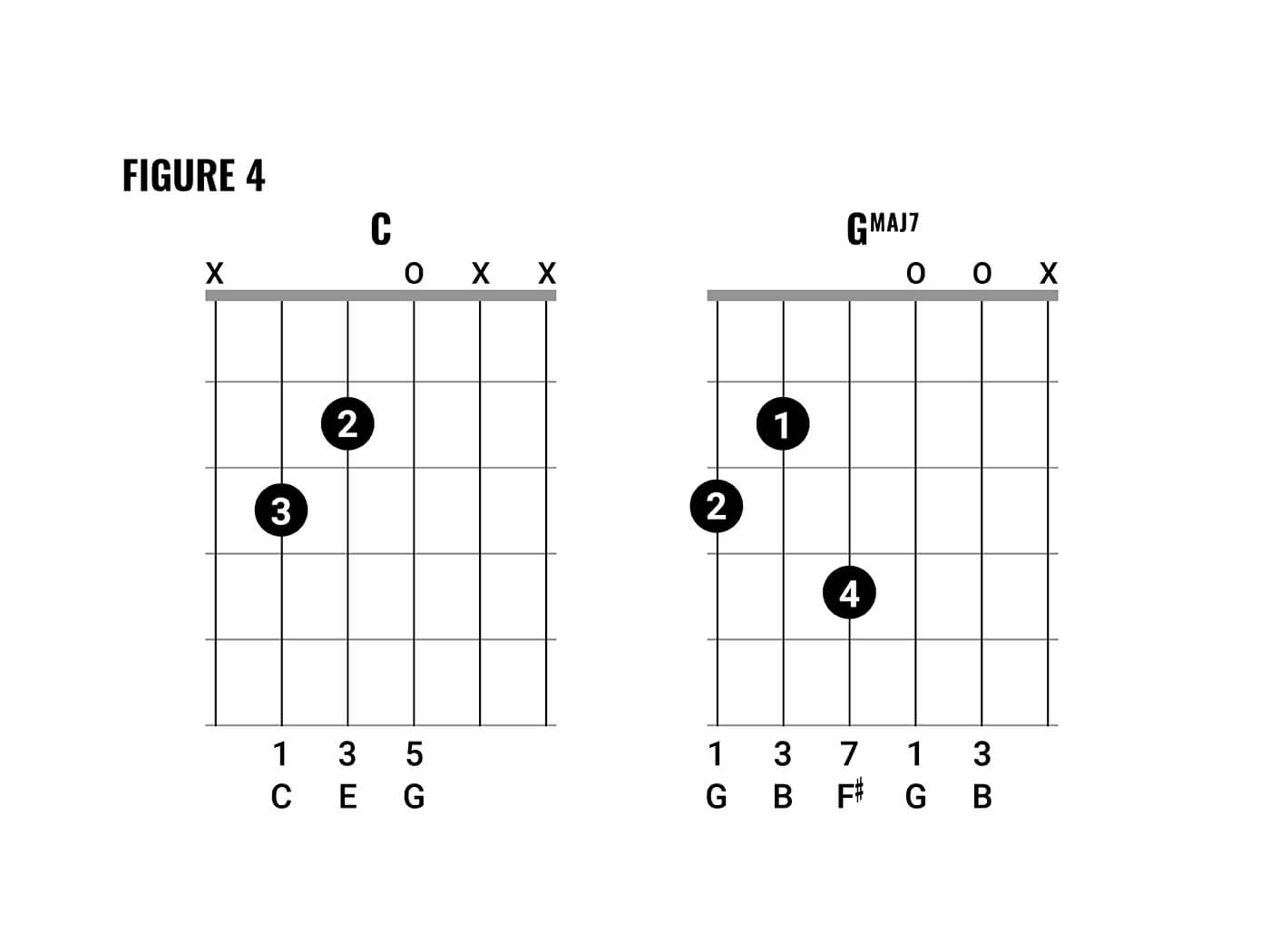 Figure 4 is a two-chord sequence; play the notes of the C chord one at a time, low to high, followed by the notes of the G major 7 chord. This is a pattern of three notes followed by five, which means that the second bass note comes on the ‘and’ after the second beat, adding an unexpected rhythmic bump. Once again, we have the tension of the F# on the D string sounding against the open G, combined with (for rock music) the unusual major-seventh sonority. Ideally, play this example with the pick. 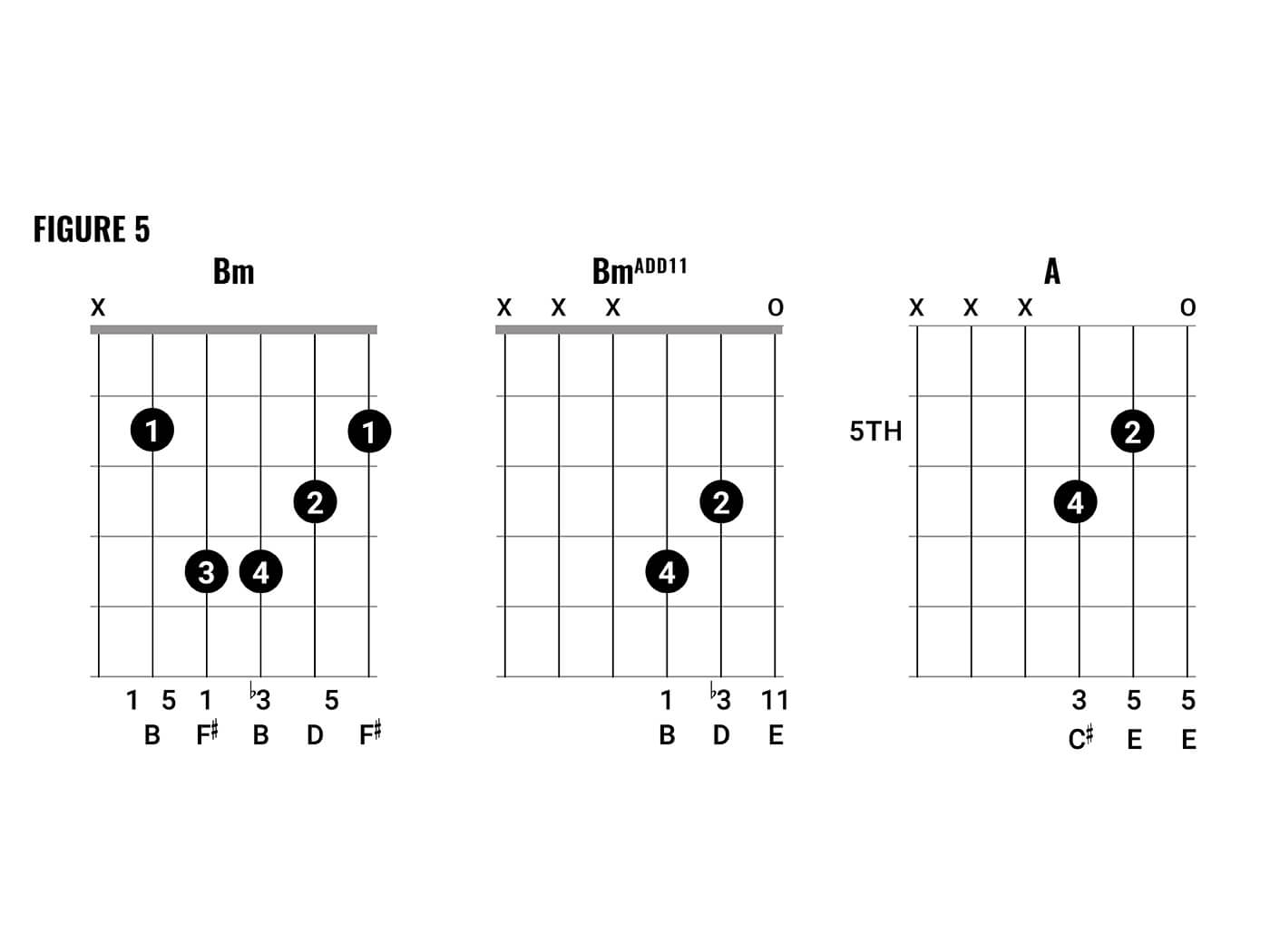 Figure 5 introduces another two-bar groove, this time adding an open string with a two-note shape that can be moved around the guitar. The B minor chord is played for one bar; start on the bass note and make up any eight-note pattern.

In the second bar, play the two chords as four-note patterns, starting with the lowest note, adding in the other two strings and then re-picking the lowest note before sliding up. There is no root note in the third chord; we are relying on the bass player to play the low A under this chord. 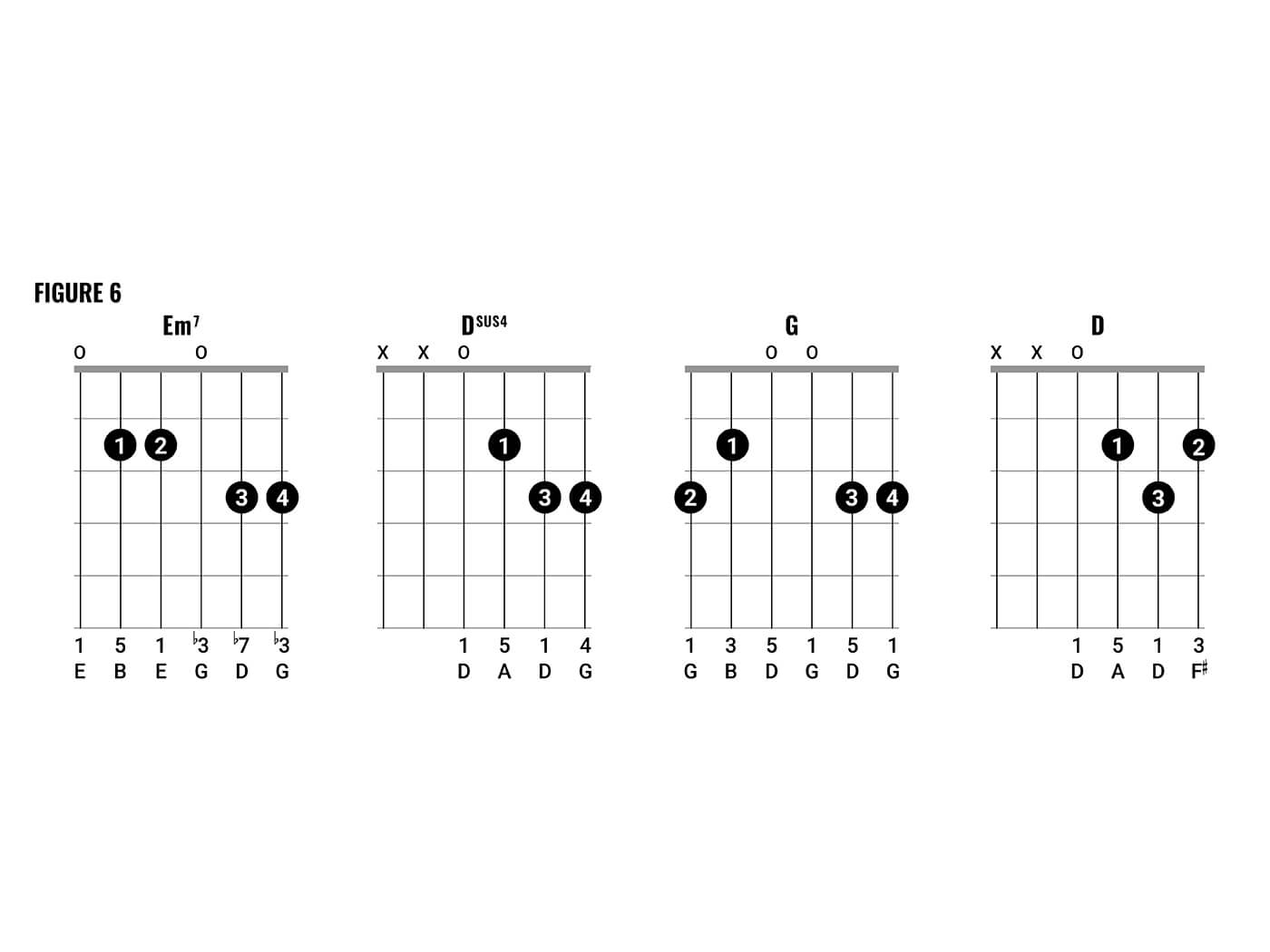 All the above examples are based on songs from the early days of The Smiths, but Figure 6 is inspired by a tune from one of Marr’s later solo albums. The idea here is to play the whole chord with a downstroke on the downbeat and then fill the rest of the bar by picking between the top two strings.

Repeat the picking pattern as you work through the four chords; there’s a satisfying arrival when you get to the D major chord. Finally, see if you can steal some of these ideas and come up with some of your own Johnny Marr-style arpeggios.

Read the first part of this lesson here.

MXR Duke Of Tone: Are MXR and Analog Man teaming up on an affordable King Of Tone overdrive?