Few songwriters have ever matched the breadth and range of David Bowie – and with Mick Ronson on guitar, he truly hit his stride. We take a look at some chord sequences inspired by the classic early albums. 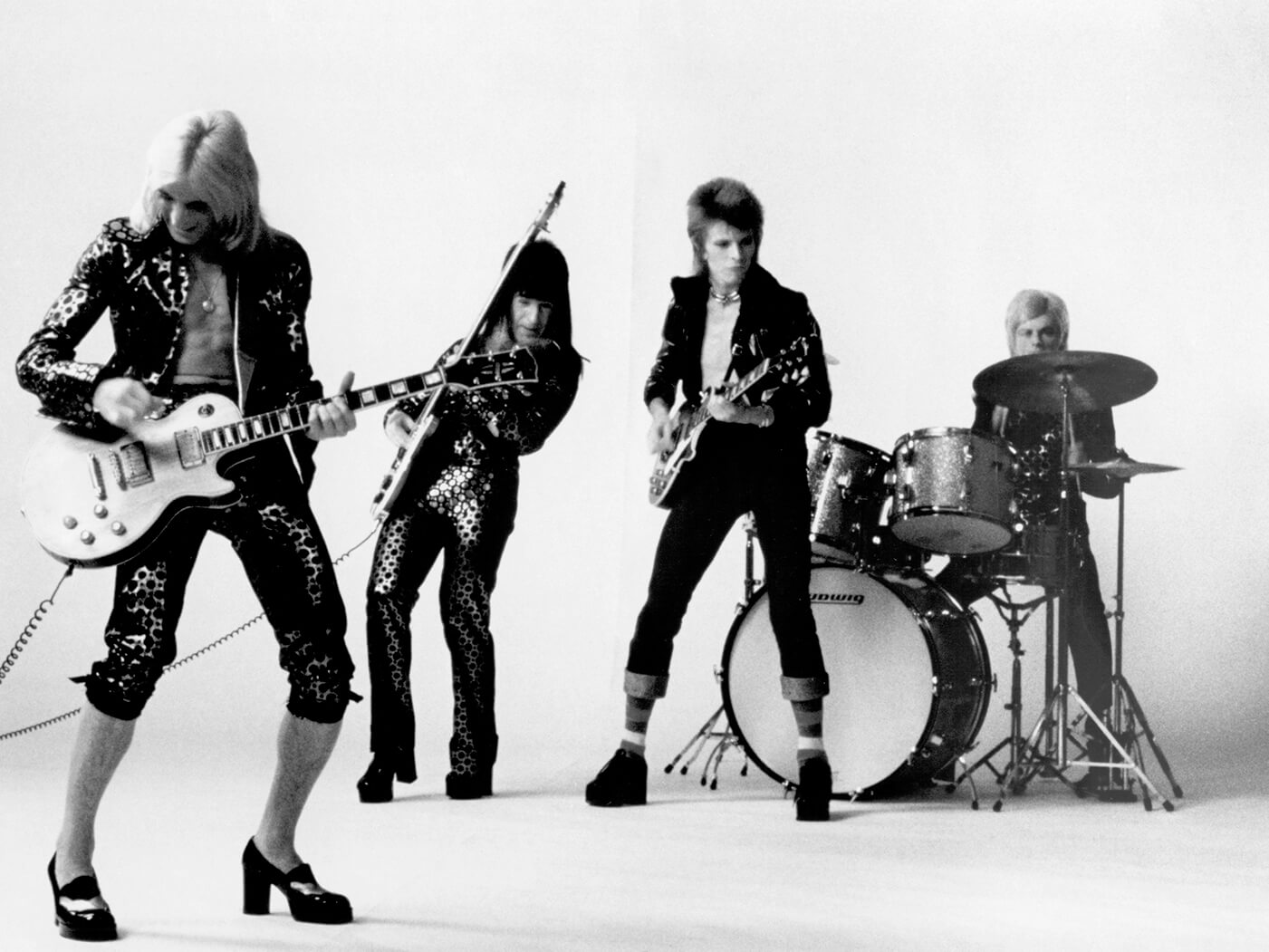 While Hunky Dory, Bowie’s fourth album, was a critical success, it was The Rise And Fall Of Ziggy Stardust And The Spiders From Mars that made his commercial breakthrough. The album included some iconic rock guitar mixed with Bowie’s penchant for lengthy and complex chord sequences. 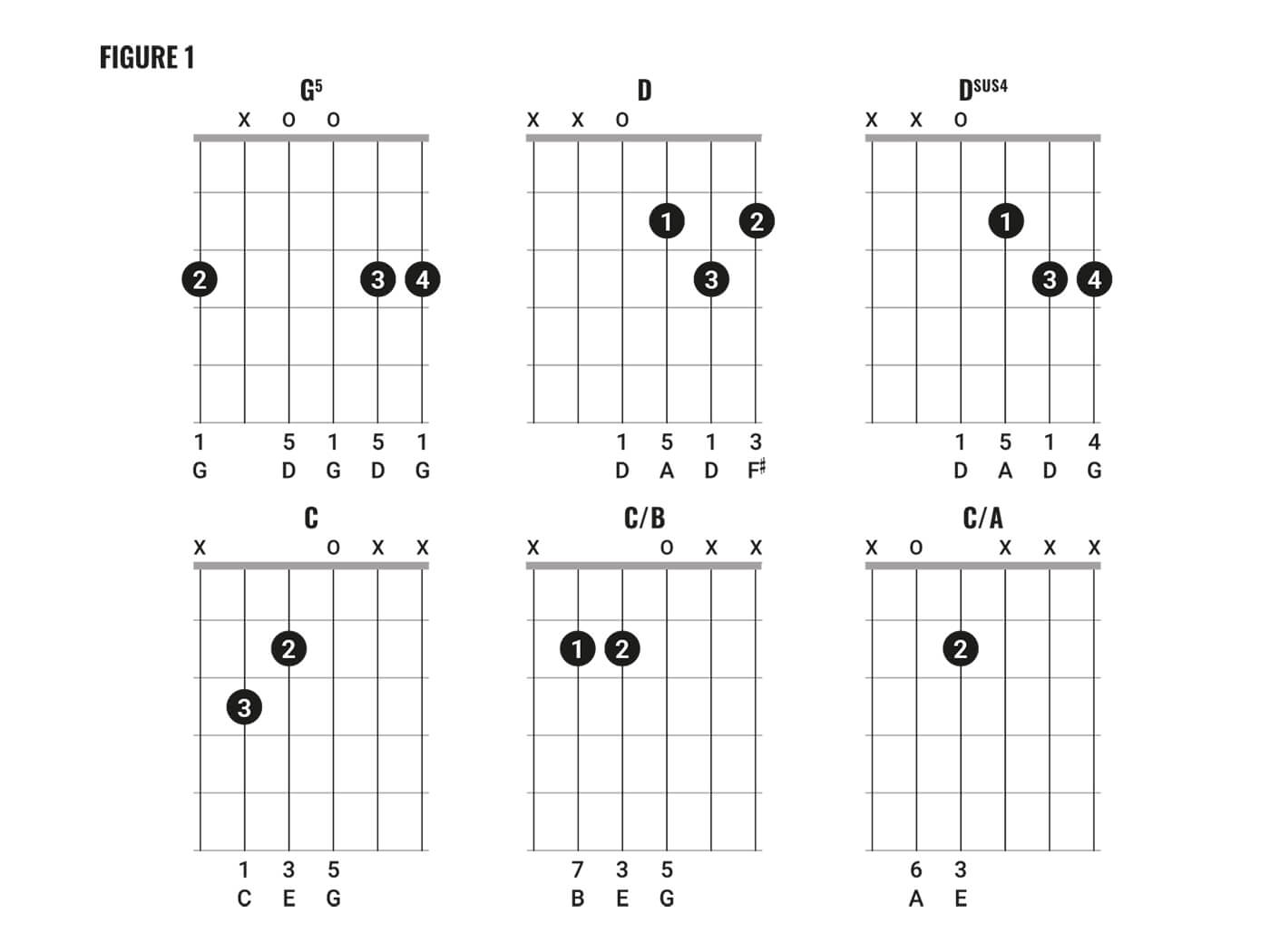 Let’s get started with figure 1 and a big five-note G5 chord, played just once on your electric with a crunchy guitar sound. If you have one, you could experiment with a half-cocked wah-wah pedal for a more distinctive tone; use the underside of your second finger to mute the fifth (A) string. Next, switch to alternating between the D and Dsus4 chords, either as a hammer-on and pull-off or, Mick Ronson-style, strumming with up and down strokes as you wiggle your fourth finger on and off. These three chords all fit in one bar.

The next three chords in figure 1 are played as arpeggios; work through them playing one note at a time, low to high. Essentially, you are playing C major with a descending bassline, so some of these chords might not look much like C major, but the harmony is supplied by the rest of the band. Then it’s back to the beginning and round again, creating a repeatable two-bar riff in the style of an intro. 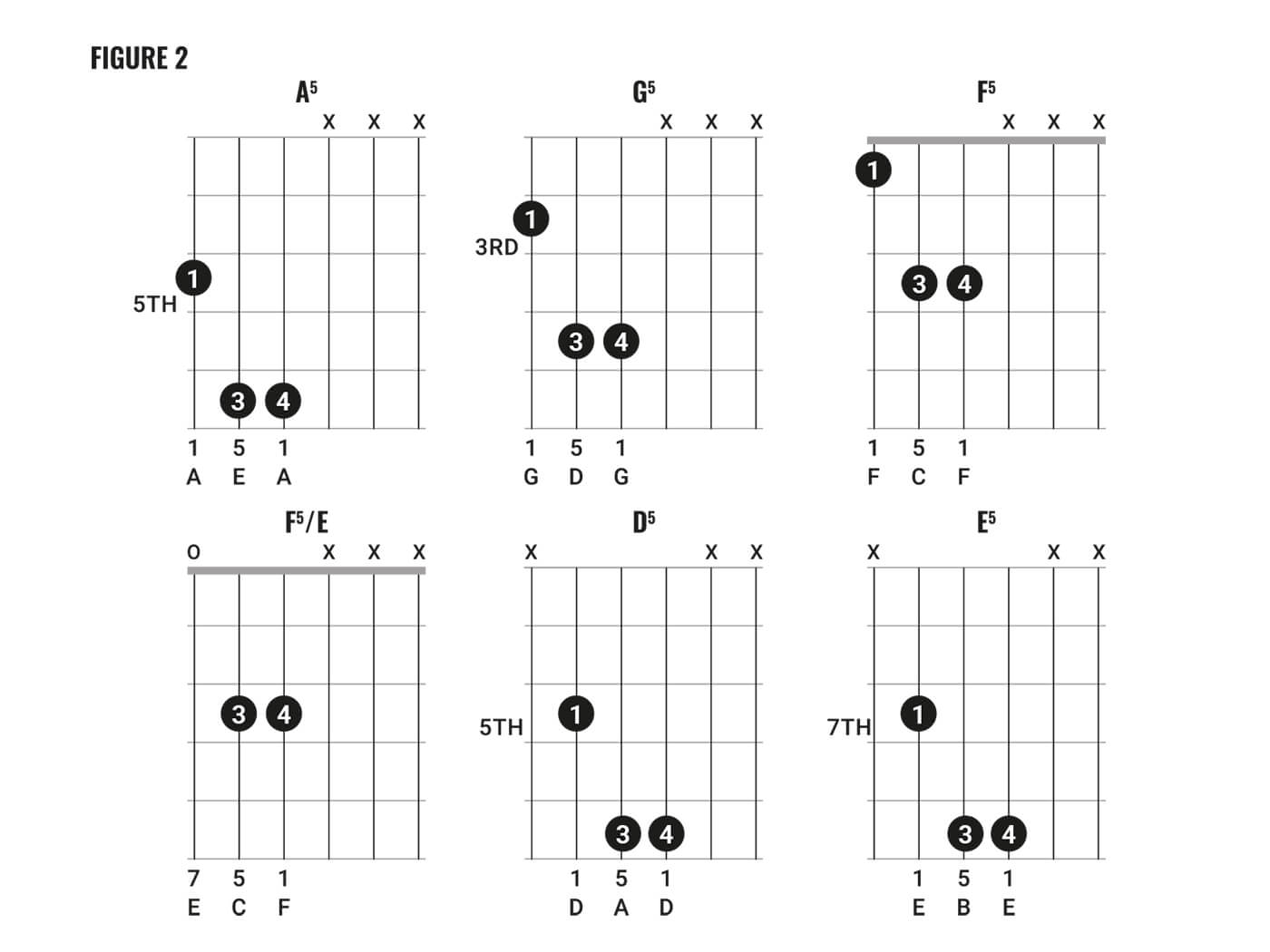 We will take a look at some typical verse chord sequences later, but right now, we’re going to jump to the chorus. Figure 2 introduces A5 and G5 chords; these are played in one bar, and in the next bar we alternate between F5 and F5/E on every beat, creating a two-bar sequence which can be repeated. Try playing it three times and then use the D5 and E5 chords for four beats each, as a way out of the sequence.

E5 would normally point towards A major, but in this case, it heads back to the top of figure 1 and the G5 chord to go round again. This riff dates from when rock was still transitioning into heavy metal, and the ‘five’ chord was nothing like as commonplace as it would become in a few years. That makes it relatively original and innovative for its time. 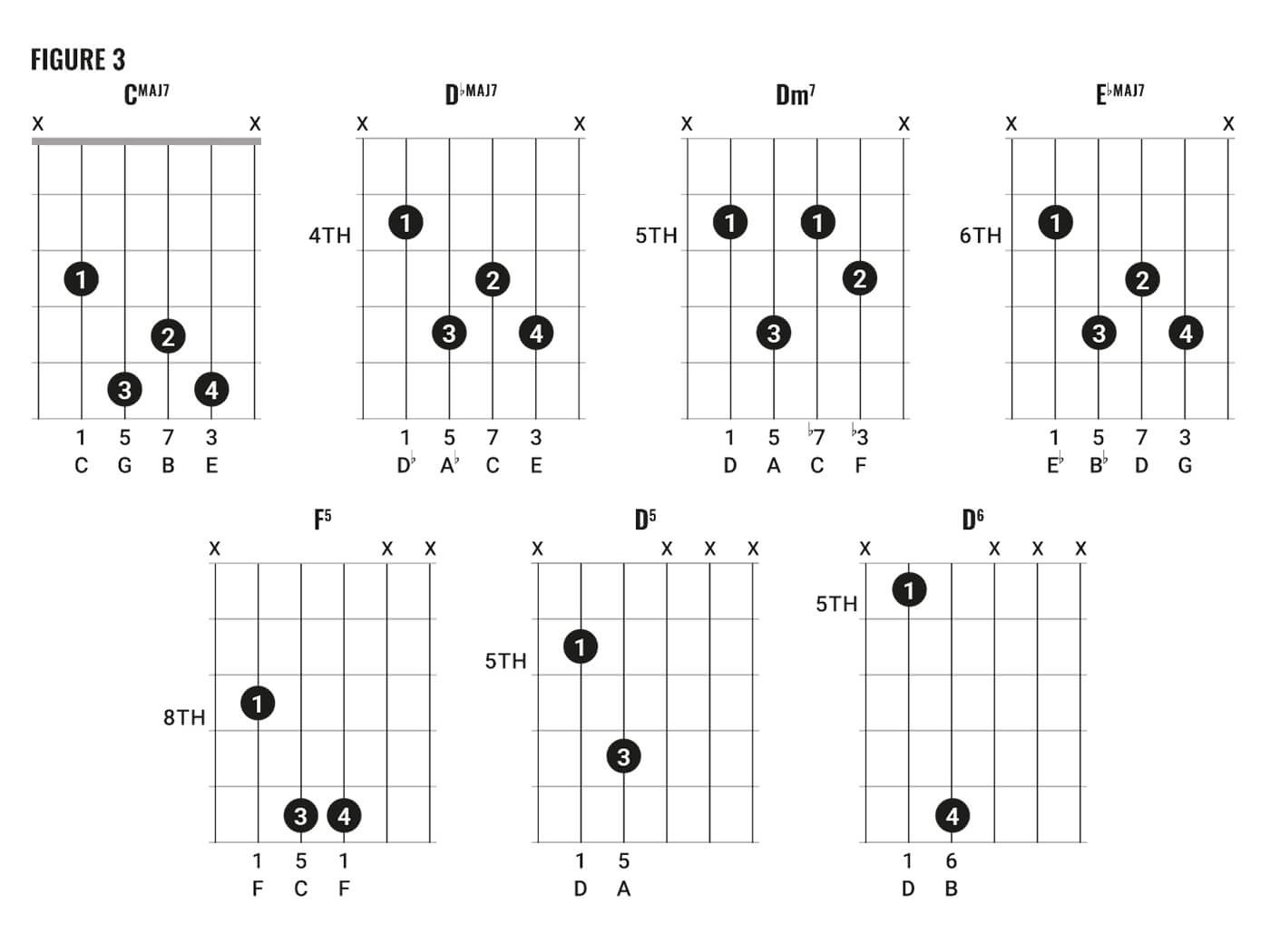 In our recent Chord Clinic on Johnny Marr, we found that four unrelated, but expressive chords can make a good introduction. Enter figure 3, where it turns out the idea had been around for a few years. Hold each of the first four chords for a full four beats, with a clean sound and just enjoy the dreamy, ambiguous quality before strumming hard on a bar of F5.

For verses, there are often conventional four-chord sequences – G, Bm, C, D, for example. Although in keeping with the tendency of songwriters in the 70s to use many chords per song, on repeat, the B minor chord might become E minor; and A minor and C could also take the place of C and D. Something like G, Em, Am, C. Try these progressions using chords that you know – listen to Ziggy Stardust for some inspiration. 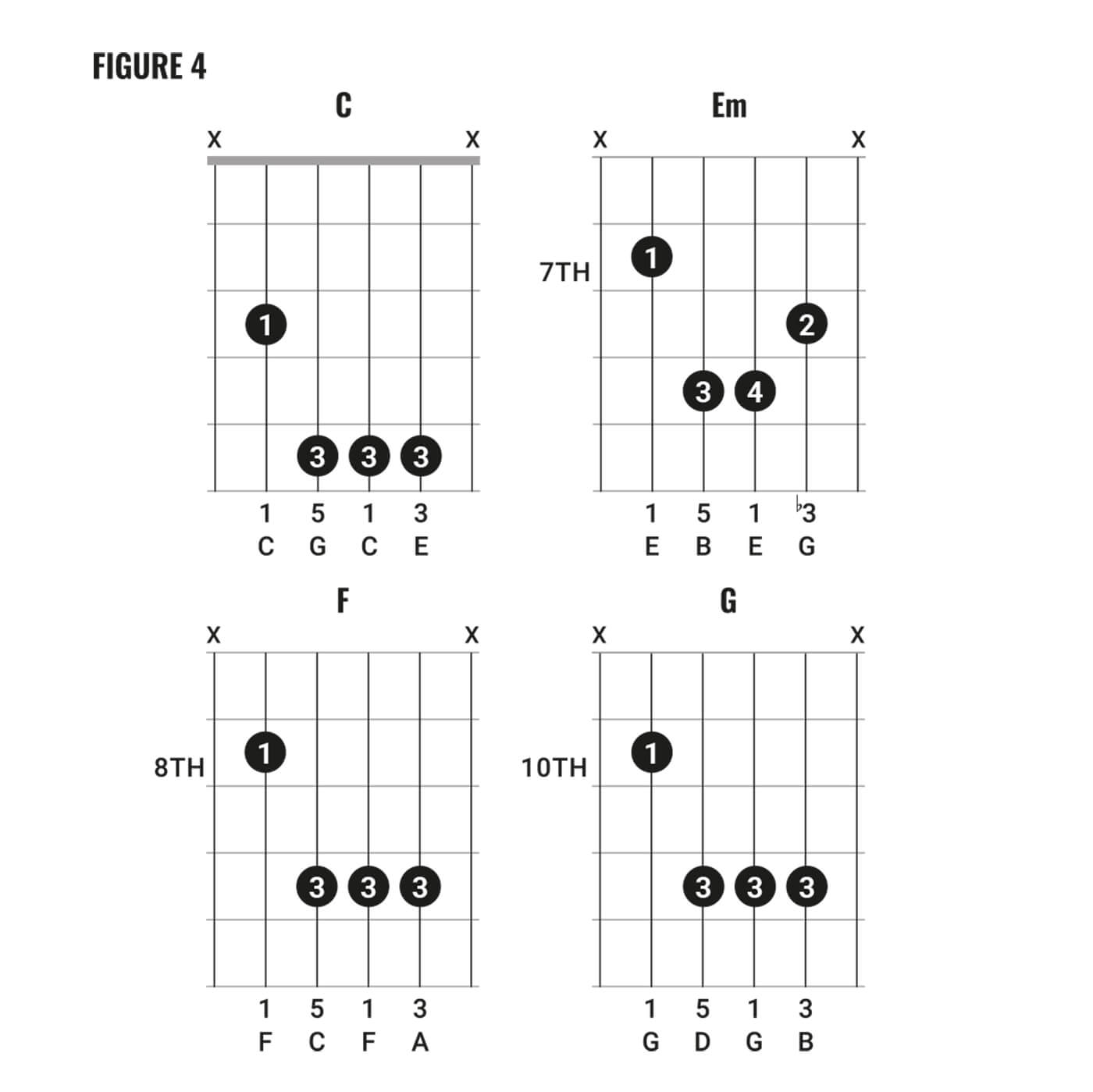 In figure 4, we have a set of four chords which are intended to follow on from figure 3. Notice that the outer strings are muted on all four shapes, so if you’re using finger three as a barre, remember we don’t want to hear it holding down the first (high E) string. If that’s a challenge, just use fingers two, three and four instead.

Give these chords a bar each, held or strummed. When you get to the fourth bar you can either play G for the whole bar, or switch back to F halfway through, before repeating the whole sequence. In this example, the opening chords from figure 3 don’t reappear until the very end of the song, and in reverse order, so that they end on the home key of C major.

Next month, we will have more Bowie, including a look at Rick Wakeman’s influence and how his piano stylings can work on the guitar.

Check out more of our Chord Clinics here.