The tones this beast is capable of are as varied as they are nasty, going from mild to wild to a unique concoction of clean notes piercing through a swarm of fuzz.

First, dial in the mix between OD and fuzz, then crank up the gain with the “Honey” knob, and EQ to taste. Blending in a bit of your unprocessed signal via the “Dry” dial opens up even more possibilities. And hitting the “Buzz” switch in the middle of the box amplifies the high-end frequencies, resulting in the screeching fuzz you’ll hear on vintage units.

But the best part about Royal Jelly is its two circuits, dubbed “Queen” and “King.” They’re arranged in parallel and are identical, which means you can create two ‘presets’ and engage either one for rhythm and lead, for instance. 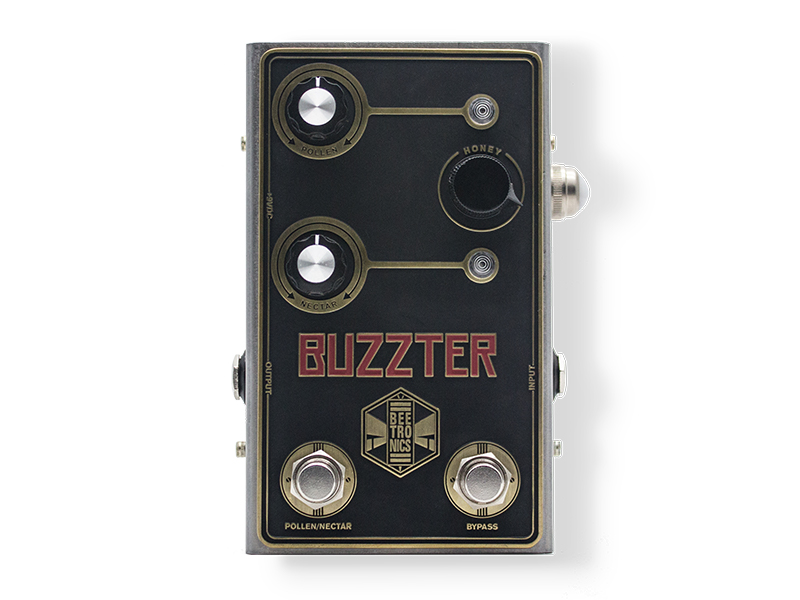 Ever felt like you need two boost pedals on your board? Well, Buzzter is the answer you’re looking for. The stompbox packs in two stages of boost that you can deploy as an ‘always-on’ unit to drive the front-end of your amp (or another gain pedal), as well as a regular boost for when the solo kicks in.

The two stages—called “Pollen” and “Nectar”—have their own individual output level knobs, while a single “Honey” dial controls the overall boost level. However, there’s only one footswitch to toggle between stages, so you might need to bypass the pedal, select a preset, then engage Buzzter again to avoid crazy volume jumps.

The Royal Jelly retails for $289 and the Buzzter retails for $179. For more information, check out beetronicsfx.com.