Like its namesake Roman structure, this pedal is a feat of engineering. 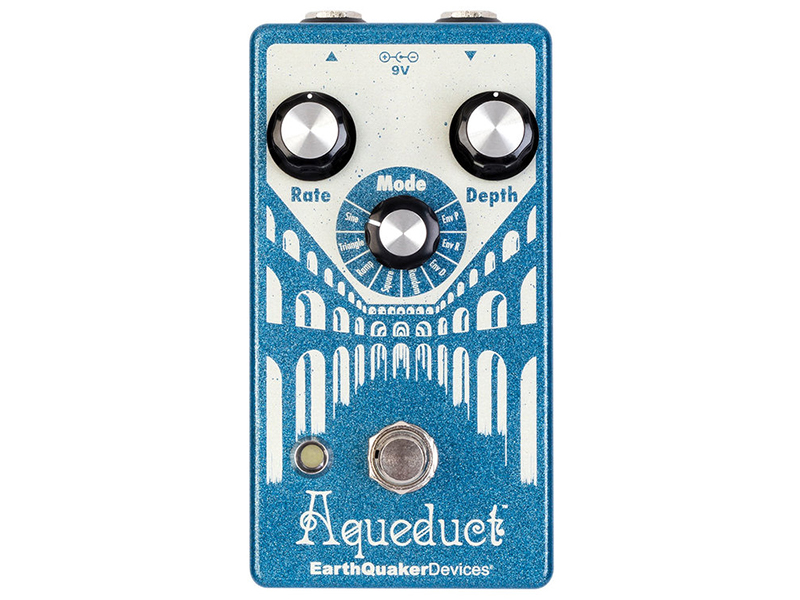 EarthQuaker Devices has announced the Aqueduct, and it’s everything you’ve wanted in a vibrato stompbox.

The Aqueduct is a vintage-voiced vibrato with a staggering range of modes: “Sine,” “Triangle,” “Ramp,” “Square,” “Random,” “Env P, ” “Env D” and “Env R.” The pedal’s layout is fairly simple, with an eight-way rotary knob to select the various modes, and “Rate” and “Depth” knobs to fine-tune the effects.

Here’s a quick rundown of the modes:

The “Sine,” “Triangle,” “Ramp” (or sawtooth), and “Square” modes are the classic vibrato modes that need little explanation. They range from subtle and syrupy to abrupt and rigid.

The “Random” mode is where things start to get mind-bending. As its name suggests, it bends your pitches haphazardly. The brand likens it to “a drunken master of modulation who slurs your notes into an unpredictable assortment of greasy pitch-bends before disappearing at last call and leaving you stuck with the tab.”

The three envelope modes use your touch—for example, pick attack—to govern the depth, rate and pitch of the vibrato. So, essentially, how you strike the strings will affect the modulation.

The “Env P,” which the brand dubs the “My Bloody Valentine,” is the envelope-controlled pitch mode. This is the only mode that includes a wet/dry mix, and can open up a whole new world of effects, from tremolo to chorus to flanger and even tactile pitch drops.

Lists for $199. More information at earthquakerdevices.com.