Scroll through the gallery to check out some of the models:

Each year, Annual collections of models are conceived and created in the Fender Custom Shop to showcase the latest innovations and developments – everything from pickup design to wiring and finish processes to wood combinations and more.

Making is debut at Winter NAMM 2019 is the 2019 Prestige Collection, featuring 11 one-of-a-kind Masterbuilt guitars and basses from the Custom Shop’s most-esteemed Master Builders.

Paul Waller’s Building Block Strat guitar is made of toy building bricks. Paul Waller has toyed with the idea of making a guitar like since his buzz-worthy Cardboard Strat was released in 2015.

“I love working with different materials to create guitars that are extremely unique,” Waller said. “LEGO was a huge part of my youth, and undoubtedly had a huge impact on my career path.”

Features include handmade hardware that emulates traditional brick pieces, only made of materials suitable for guitar construction. The vibrant traditional colours of toy building bricks work so well in blending the two mediums.

“This guitar will appeal to the young at heart,” he said. “Most guitar players feel a connection to their youth, cranking out sounds of past experiences. For me, music is emotion in the form of a sound wave that carries us through a feeling. The fact that you can ride the emotion on a toy, provides a fun aspect to the emotion, bringing a smile to face of everyone who plays it.”

Two guitars will be made with two matching amps masterbuilt by Jim Dolmage – dubbed the Building Block Deluxe Amp. This is a one-of-a-kind showpiece built on the framework of a ’57 Custom Deluxe amplifier. Thousands of toy bricks were painstakingly arranged to approximate the look of Fender’s iconic tweed-covered amplifiers. LEGO® is a trademark of the LEGO Group, which does not sponsor, authorize or endorse this project or product. Guitars and amps are not for sale.

Jason Smith’s Luna Y Sol is a custom Precision Bass inspired by his meeting with artist Madeline Hanlon at last year’s Winter NAMM show. Hanlon is known for her artistic style of wood burning, which was integrated into the Mexican folk art sun and moon design. Smith’s favorite aspect of the bass is its overall aesthetic appeal – from the detailed wood-burned image and thematic red coral inlays to the rich, warm wood tones, smooth blend of colours and the feel of the satin lacquer topcoat.

“This bass feels amazingly comfortable, has a nice medium weight, and the sound of the Josefina Campos overwound pickups just gives the player a sonic experience like a P-Bass on steroids,” Smith said. “This bass just seems to have it all, style, class, and tone!”

Dennis Galuszka’s Hawaiian Fish Hook Telecaster was inspired by Galuszka’s love of Hawaiian culture, where his in-laws are from. The Telecaster features a vintage pickup and rope binding on the hook – the first of its kind on a guitar. “I wanted to build something masculine and tough-looking, but still simple,” Galuszka said. “This instrument is for players that feel in charge when they walk on stage with a minimalist guitar.”

Dale Wilson’s Spalted Maple Telecaster was inspired by a singular piece of wood and unique acoustic vibe of Fender Custom Shop Founding Master Builder Fred Stuart’s Founders Design Herringbone Telecaster. The guitar features a Violin Burst that highlights the beauty of the spalted maple top, herringbone binding and P90 pickups in conjunction with a handwound Josephina Broadcaster pickup. Ideal for any player or collector who appreciates exotic wood guitars with a wide range of tones, the Spalted Maple Telecaster makes its debut at Winter NAMM 2019.

Todd Krause’s Goldfish Stratocaster was inspired by two guitars he previously built for NAMM, a Trout guitar and Weiner Dog Stratocaster, with the two ideas colliding into one. The guitar features inlay work from Principal Master Builder Ron Thorn and detailed goldfish-inspired artwork by Sarah Gallenberger.

Greg Fessler’s Battle of Missionary Ridge Tele was inspired by the famous Civil War battle fought November 25, 1863 near Chatanooga, Tennessee. The wood tells a unique story and was sourced from Capital Park, which is located alongside the California State Capitol building in Sacramento, Calif. In 1897, The Daughters of the Army of the Grand Republic donated several saplings that were gathered from major battlefields of the Civil War and carefully transplanted into the rich California soil as a lasting memorial to those who lost their lives in the war. Those trees reside in an area of Capitol Park called “Memorial Grove.” This guitar is made from wood derived from tree No. 125, which was removed due to heart rot and instability of limbs. The tree and its memory live on in this exemplary Telecaster guitar.

John Cruz’s Exotic Thinline Stratocaster uses beautiful exotic hardwoods with character as well as a custom inlay design. The orientation of the Claro walnut combined with the Inlay scheme help glorify the natural beauty of this wood. Ideal for players and collectors that appreciate breathtaking hardwoods, this guitar combines ultimate playability, a classic body shape and the feel of a Fender Stratocaster.

Yuriy Shishkov’s Silence Stratocaster is an abstract art guitar piece with watercolour painting, silver cloisonné, rubies, diamonds and sapphires. It can be viewed from 360 degrees, and Shishkov encourages those witnessing it to create their own “meaning” as an observer.

Ron Thorn’s Coronado is his fresh take on the classic Coronado model using a laminated/pressed arch top and back with an alder rim and center block. Custom-made pickups were designed specifically for this guitar, while the RSD J-Bridge and tailpiece round out the hardware. A unique dove-tail bolt-on neck joint, tilt-back headstock, and a variety of other refinements make this a finely crafted instrument worthy of the “Custom Shop’s Finest” designation.

Kyle McMillin’s The Exotic Hybrid was inspired by a design he made in his garage nine years ago. “I made some minor changes that I wish I had done back then, and also redesigned the guitar to incorporate Fender’s traditional body shape and headstock,” McMillin said.

The guitar features a Stratocaster body and Telecaster headstock; a directly mounted TB4 humbucking pickup; and a custom control configuration designed so the switch is out of the way when strumming. “In the past, I would accidentally hit the selector switch on a Stratocaster while playing,” he said. “In this design, the switch is still within the swing of your arm’s reach, but just a little further from your standard strumming region, so you can’t accidentally bump the switch.”

The Exotic Hybrid is ideal for players who love an exotic look and variation on Fender’s traditional designs.

There are many compelling features about this Tele starting with the Red frosted duco lacquer finish. Duco finishes were first made popular in the 1930s. As the duco paint dries, it crystalizes and creates a stunning look. The guitar hosts an alder body, mahogany neck, original Blackguard Tele (bridge) and a TV Jones Classic Filtertron (neck) pickups. There is an RSD Tele bridge and Schaller® M6 mini tuning machines for ultimate stability and intonation. Buehl added a custom clear pickguard to allow the duco finish to shine through. All these features together create a classic Tele with a host of never-before-seen features. 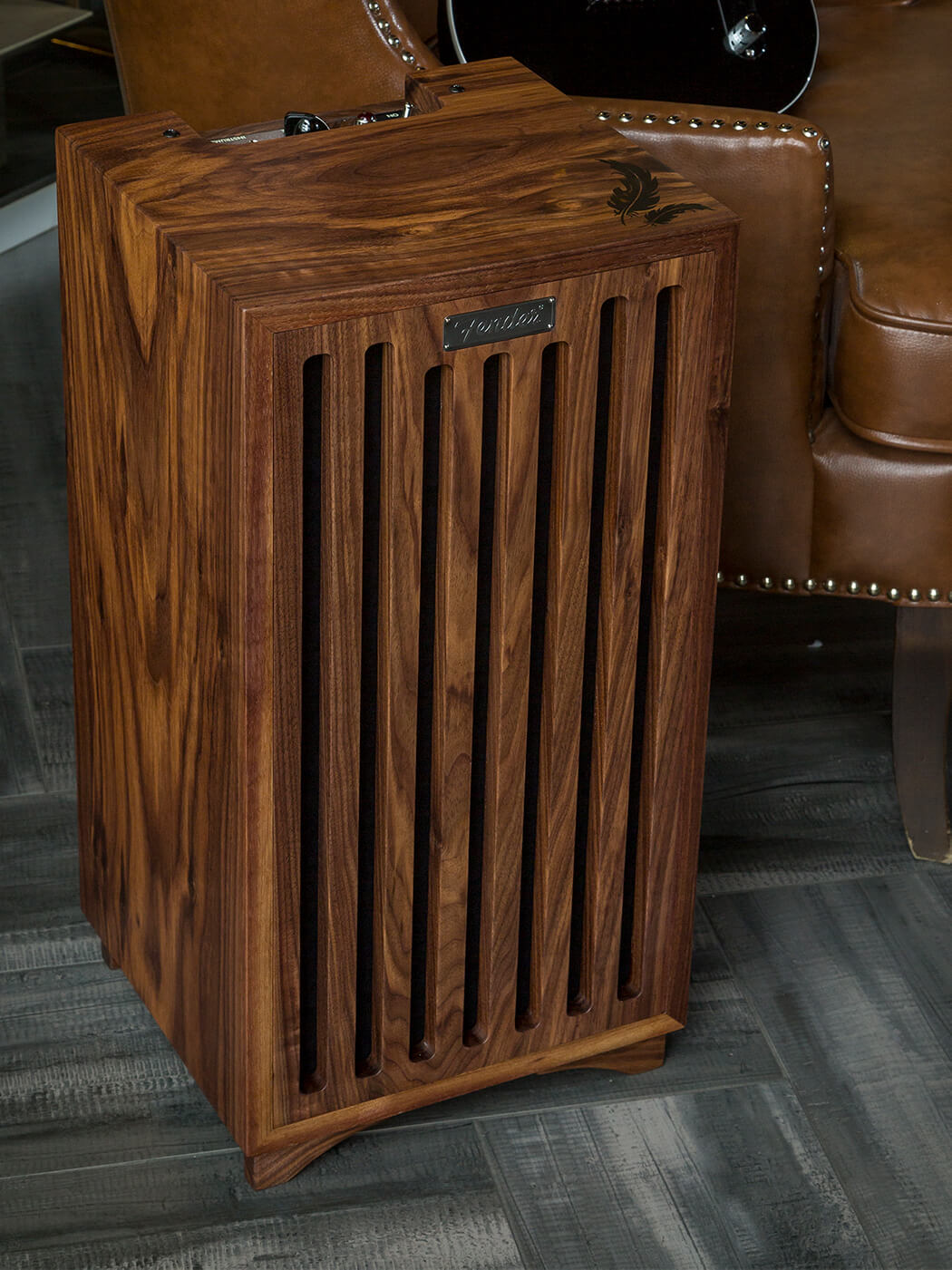 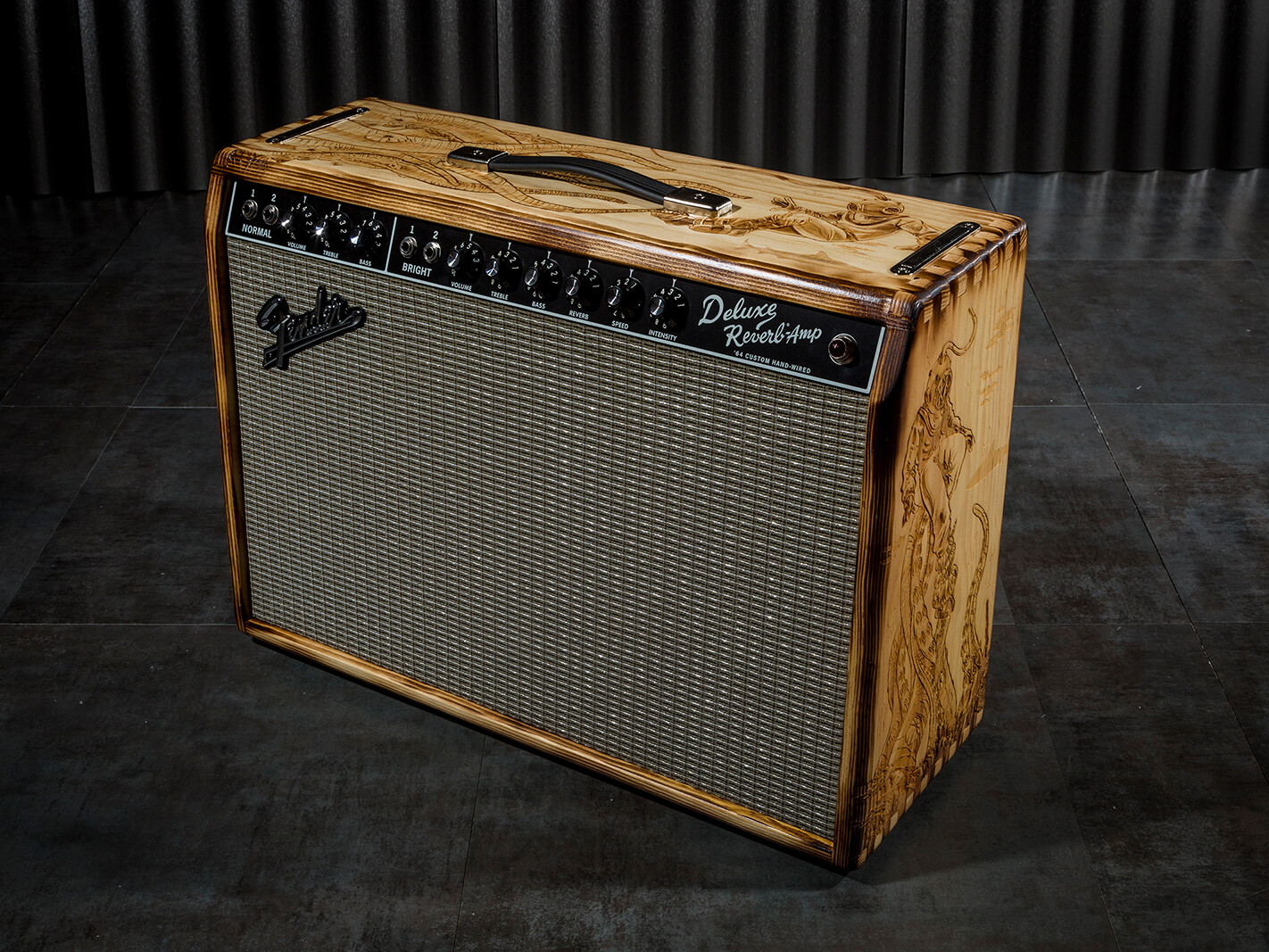 Light those patio torches and grab that Strat, because the Fender Amp Custom Shop has combined the exotic spirit of the South Sea islands with a sonic slice of Fender history in the gorgeous form of the ’64 Deluxe Tiki amplifier. Elegantly designed and crafted by Amp Custom Shop Master Builders Shawn Greene and Jim Dolmage, the amp’s rustic select-pine cabinet is beautifully laser-etched with stylised Polynesian Tiki imagery inspired by the work of Fender designer Mike Whelan.

The amp also features “torched” wood-burnt cabinet edges, hand-wired `64 Deluxe Reverb circuitry, a single 12” Celestion Cream speaker and a Custom Shop logo on the back. This unusually distinctive one-of-a-kind amp is paired with a matching Tiki Stratocaster guitar that will have you soloing over “My Little Grass Shack in Kealakekua” in no time (if you can after all that rum punch).

From the bottomless creative depths of the Fender Amp Custom Shop comes a most unusual one-of-a-kind piece combining perhaps the most fearsome of all fabulous sea beasts with a classic sonic slice of Fender history—the ’64 Deluxe Kraken amplifier. Elegantly designed and crafted by Amp Custom Shop Master Builders Shawn Greene and Jim Dolmage, the amp’s rustic select-pine cabinet features exquisitely laser-etched imagery (inspired by the work of Fender designer Mike Whelan) depicting a deep-sea diver of old in truly dire straits—entangled in the formidable tentacles of the enormous Norwegian sea monster that once struck stark terror into the hearts of seafarers everywhere: The Kraken. The amp also features “torched” wood-burnt cabinet edges, hand-wired ’64 Deluxe Reverb circuitry, a single 12” Celestion® cream speaker and a Fender Custom Shop logo on the back. This unusually distinctive one-off amp is paired with a matching Kraken Telecaster guitar with which you can explore untold musical depths.