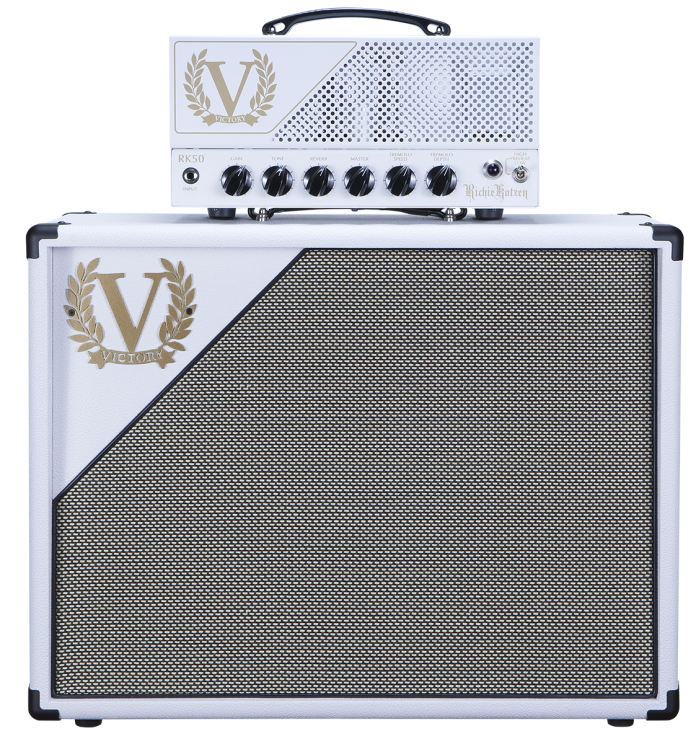 This new collaboration with Richie Kotzen is a rekindling of a long-standing friendship between the celebrated American rocker and Victory Amplification chief designer, Martin Kidd.

Martin Kidd: “The initial discussions were for a unique approach to a 1×12 combo of around 40-50 watts. Richie is a big fan of the low-end response and feel you get from the power stage of a Marshall Super Lead-style circuit. For the front end, he wanted to rival his Cornford RK100 in terms of gain, yet have enough range to roll back to pushed clean and crunchy rhythm sounds.

He likes to control things directly from his guitar, and also using his signature Tech 21 RK5 Fly Rig, so his only requirement in terms of gain or channel switching was a simple preamp boost that we achieved with valve gain staging. 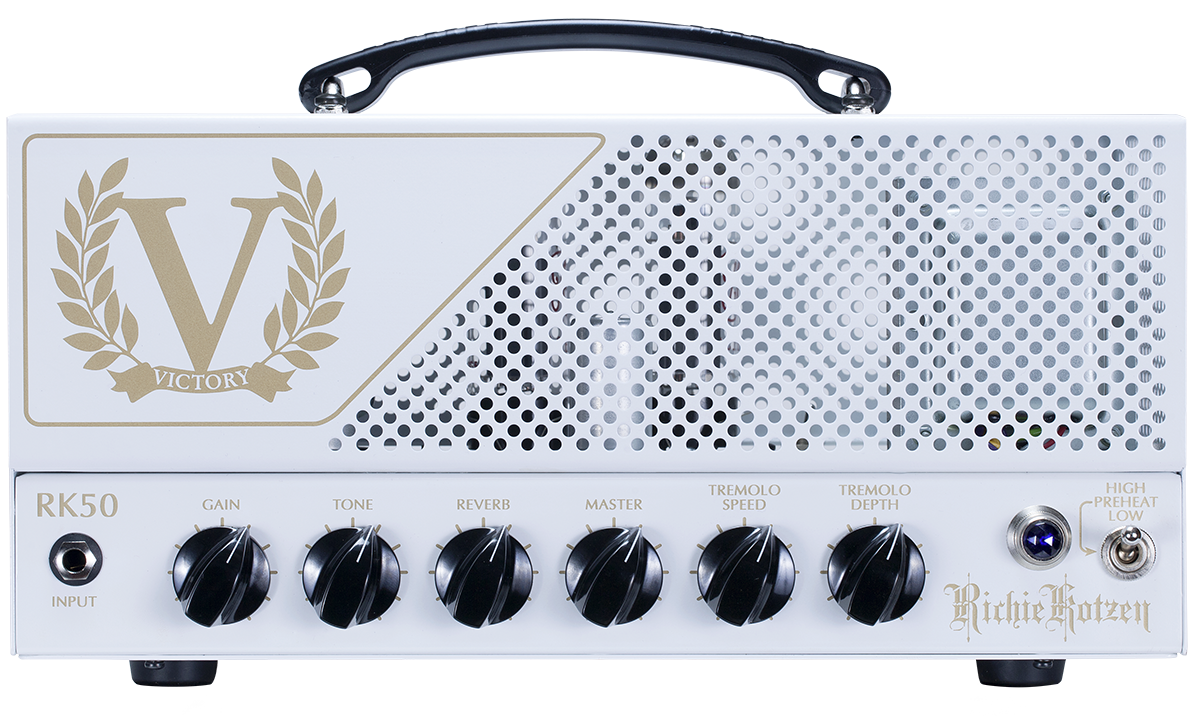 “Likewise, he didn’t want or need extensive EQ shaping so there’s just a single ‘tone’ knob that works on the treble frequencies only. Brighter or less bright – it couldn’t be more simple! Nevertheless, given that he (and potential customers) will be using it with a variety of different cabinets, it was important to include some kind of low-end attenuation ability, so there is a ‘speaker damping’ switch on the rear panel that curbs some of the low-end resonance if you want the sound to be tighter. 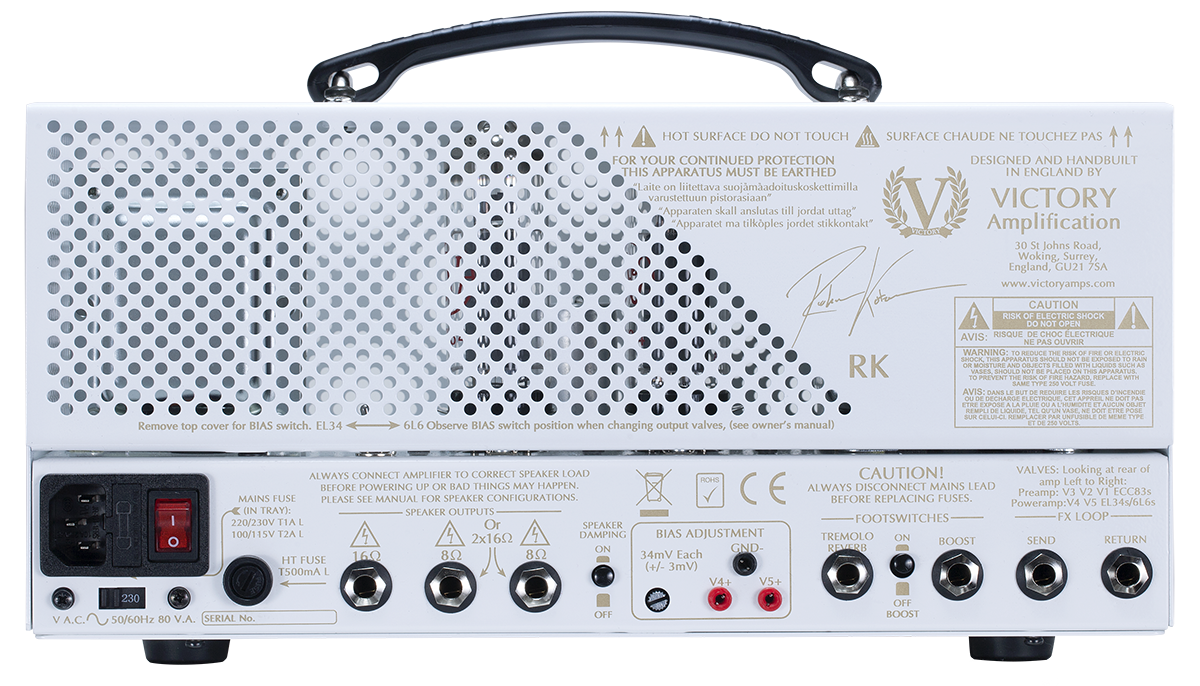 “Richie also surprised us with his request for reverb and tremolo, but having developed versions of both effects for V40 The Duchess and V40 Deluxe, it was relatively simple to include these in the RK50 and really add to its appeal. In the Compact Series head the reverb is digital; in the Heritage Series combo it’s a full-length spring reverb.

“Even we’ve been surprised at how many styles the amp seems to suit, but hearing Richie play it live is where the biggest smiles happen. We are extremely proud to be behind such a brilliant and unique artist.” 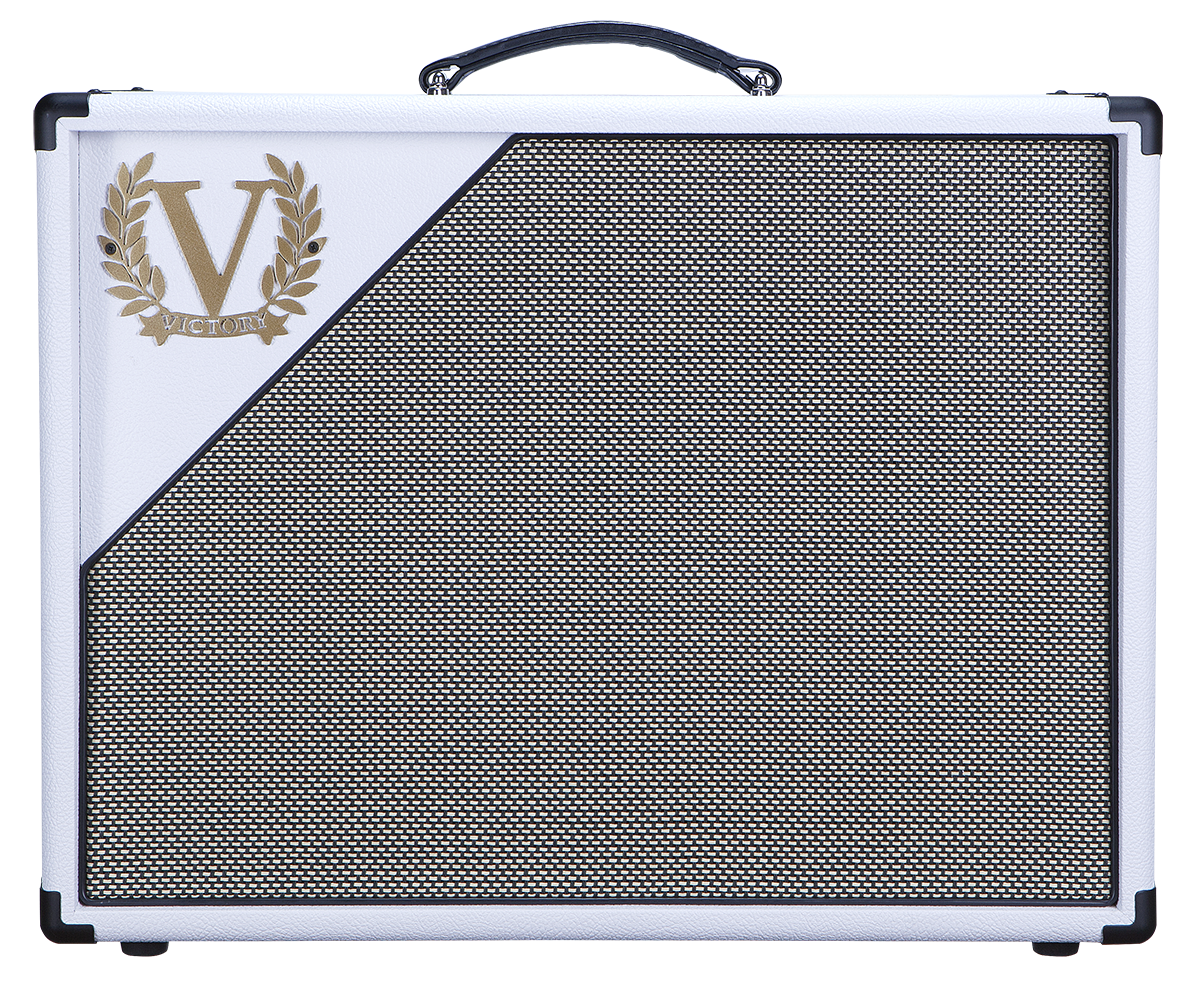 FEATURES
1. SINGLE CHANNEL PLUS BOOST & MASTER VOLUME
This deceptively simple layout offers access to a massive range of clean, breakup and full-on gained tones. The valve gain boost is footswitchable and/or selectable on the rear panel.
2. SINGLE TONE
Richie wanted simplicity, so we gave him exactly that! Darker or brighter, no messing about.
3. REVERB
The RK50 Combo has footswitchable spring reverb (digital in the Compact head).
4. TREMOLO
The coolest guitar effect ever? Richie’s a fan and so are we: go from smooth and slow to full-on stuttering rhythms.
5. HIGH & LOW POWER MODES
50 watts high power or 9 watts low power: your choice of stage or bedroom; high headroom or more compressed dynamics.
6. SERIES EFFECTS LOOP
Run your delays and reverbs – or anything else for that matter – in the loop should you so desire.
7. SPEAKER DAMPING
Switches the negative feedback loop in the power section on and off. Out, there’s more bass resonance and power amp gain. Use it to optimise the amp to your chosen cabinet and/or the overall volume. Some people just love trouser-flapping low end and some really don’t. The choice is yours.
8. BIAS TEST POINTS
No more fiddling inside when you change or check output valves.
–