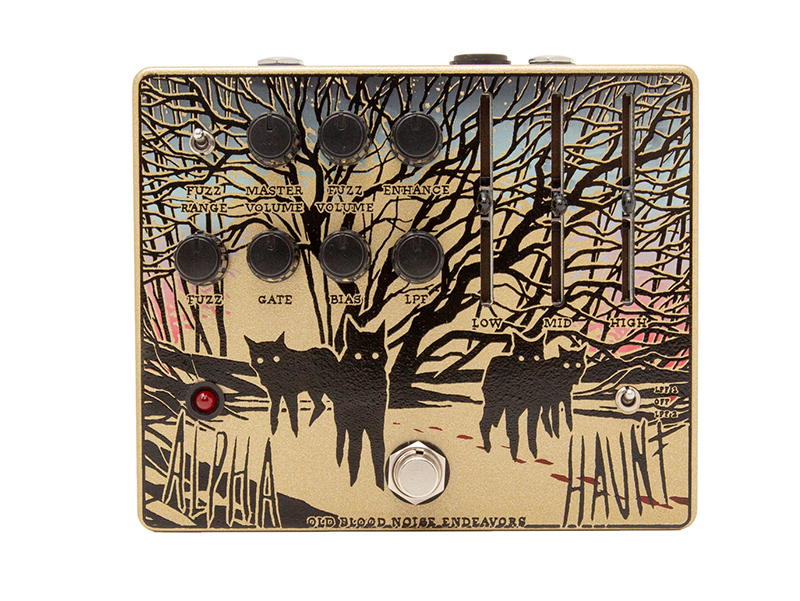 Fuzz boxes are typically thought of as one-trick ponies, on-the-nose dirt pedals or way out on the leftfield. Not the Alpha Haunt. The new release from Old Blood Noise Endeavors can get you pretty much any fuzz sound, from woolly to singing to sputtering like an AM radio on its last legs.

It’s all based on two circuits: a fuzz one and an ‘enhance’ circuit, running in parallel, with independent volume controls. There’s even an active three-band equalizer and a tweakable low-pass filter—the latter in two sub-modes—to further shape your tone.

With the fuzz circuit, which has a pair of ranges to pick from, you can control the gain, compression, tone and, significantly, the bias. It sags power, resulting in nasty ‘death gasps’ as though your guitar’s struggling to breathe. That said, you can still nail classic fuzz tones and hairy overdrive-ish sounds with the Alpha Haunt—it just takes a bit of dial-twisting. And the ‘enhance’ circuit ensures you’ll have body and clarity when you’re cranking up the unit.

The Alpha Haunt retails for $229. For more info, check out oldbloodnoise.com.