Foals – Life Is Yours review: one of the most gratifying listening experiences in the band’s canon

Beckoning a halcyon summer via their most infectious set to date, a leaner Foals eradicate post-pandemic woes with an eruption of vibrant sonics.

“Contemplative and considered “and “an expression of rage and frustration” – these are the words Foals main-man Yannis Philippakis used to describe the respective two-parts of 2019’s Everything Not Saved Will Be Lost album duo. Back then, Foals’ stature was at an all-time high. After a decade of endurance, the year had seen them scale the album charts and scoop the Best British Group gong at the BRITs. Rumours of a Glastonbury headline slot began to rumble, and a world-spanning tour loomed. All looked set for 2020 to be the year in which Foals’ star went supernova.

Evidently, the ensuing 12 months didn’t pan out quite the way that Foals – or most of us for that matter – would have hoped. Endless lockdowns, enforced separation and the catastrophic closure of the touring sector, dimmed the outlook of a band for whom intense live spectacle and audience-frenzy-baiting kept their hearts pumping. In this dispiriting context, the ideas that would shape Life is Yours, Foals’ newly released seventh album, began to build.

Setting their sights on the gleaming, dayglo summer at the end of the tunnel, the streamlined, three-piece; Philippakis, the Jazzmaster-toting Jimmy Smith and reliable kit-tormentor Jack Bevan, crafted an album that ejected the widescreen melancholy and the rock grit of their preceding records. In its place, came an all-pervading optimism.

Life is Yours swims with upbeat Chic-esque chucking, criss-crossing, laddering riffs, washes of brash synth, and inescapable hooks. Always judicious in their incorporation of the guitar, Yannis and Jimmy’s intertwined riffs, chords and melodies reconfigure themselves to detail a more buoyant sonic universe. 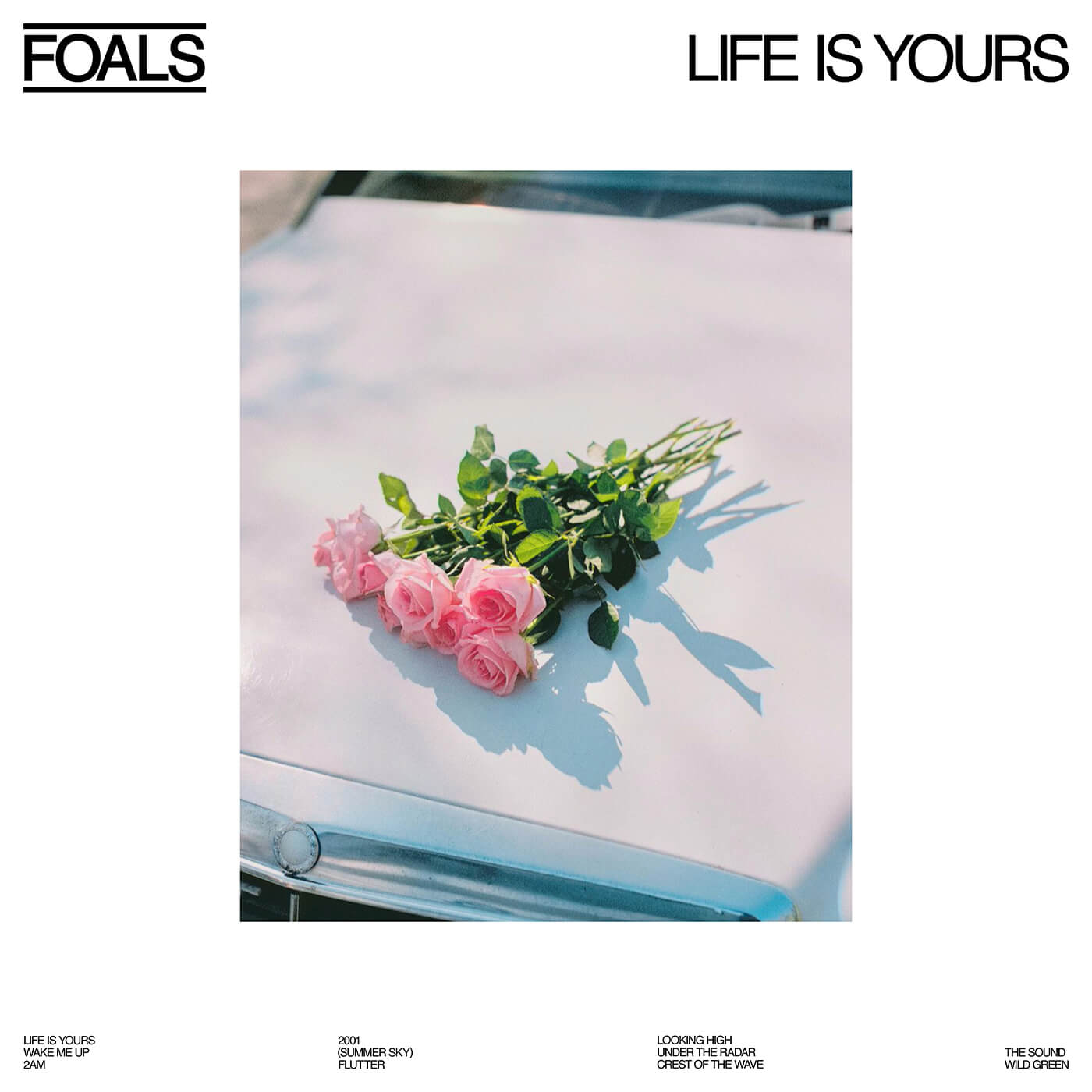 Affirming the philosophical thrust of the journey ahead, the opening title track’s breezy arrangement serves as the equivalent of a post-storm shaft of sunlight. Peppered by Smith’s characteristically slinky riffs, shimmying their way around Bevan’s relentless beat, and a growing wall of retro digital synth, Philippakis informs us that he can see the start of a brand new day, before imploring us to break away. Proclaiming ‘Life is yours’, a thematic and musical call to action is made.

Grounding established, next comes a song that’s been rooted in our collective psyche since it exploded as the album’s first shot across the bow last November. The thump of Wake Me Up’s tapestry of hooks stand tall among Foals’ finest ever. Motored by a pent-up Yannis, urgently chopping away at his Travis Bean, Wake Me Up is a burst of all-out release. While casual listeners may have found the stylistic shift jarring when first hearing the single, it’s a sound that comfortably fits a band who, even as far back as 2008 debut Antidotes have always had a foot in taut rhythmic funk. Now, diving wholeheartedly in, Foals hammer out four minutes of well-earned elation.

A similar conviction runs through 2am and the trance like Looking High. Anticipating the return of nocturnal abandon – long-missed during those lonely lockdown evenings, the former’s effortless groove and searing main riff bakes itself firmly into the ears. Looking High’s rigid dynamic, knowingly retro synths and underpinning grind of guitar is also frighteningly addictive.

Though the record’s brisk feel makes it feel short, it’s densely packed with some of Foals’ most accessible and engaging cuts. There’s the lithe interplay of The Sound – a track which steers itself around the Foals’ best jam session ever. There’s the descending melody and crystalline lead line of Crest of the Wave, and most notably of all, the astonishing 2001.

Channelling an easygoing, beach-ready vibe of the sort that Parcels frequently recline into, 2001’s insistent D minor chime, P-funk bass line and thick beat erect a sturdy stage for Philippakis’s sketch of warm nostalgia. 2001’s contracting verse bops along with an obstinate drive, but it’s the bliss of its nourishing, falsetto chorus section which leaves the most indelible mark. While the album’s initial single salvo might be loaded with the more immediate earworms, once the balmy pulse of 2001 starts to percolate in your skull, it’ll be flowing around it for far longer. Trust us.

Concluding with the bucolic buoyancy of Wild Green, Life is Yours drives toward its resolution by hard swinging between foaming synth arpeggios and an unchained lead guitar, which flies clear of the arrangement and launches itself up for air. Yannis’s vocals submerge in an ocean of noise, peppered by spritely interweaving guitar lines and muscular bass. All of which goes to say that Life is Yours lands with an effervescent, technicolor finale.

While there will undoubtedly be those who will bemoan at the lack of anything resembling the metal-tinged heft of What Went Down and Black Bull, those who’ve stuck by Foals through their numerous evolutions and sonic detours will embrace Life is Yours as yet another sure-footed feat of genre expansion. Its glossy arrangements (steered by numerous big-name producers), assertive shower of hooks, slick musicianship and life-affirming central manifesto build up one of the most gratifying listening experiences in the band’s canon.

Foals’ Life Is Yours is out now.