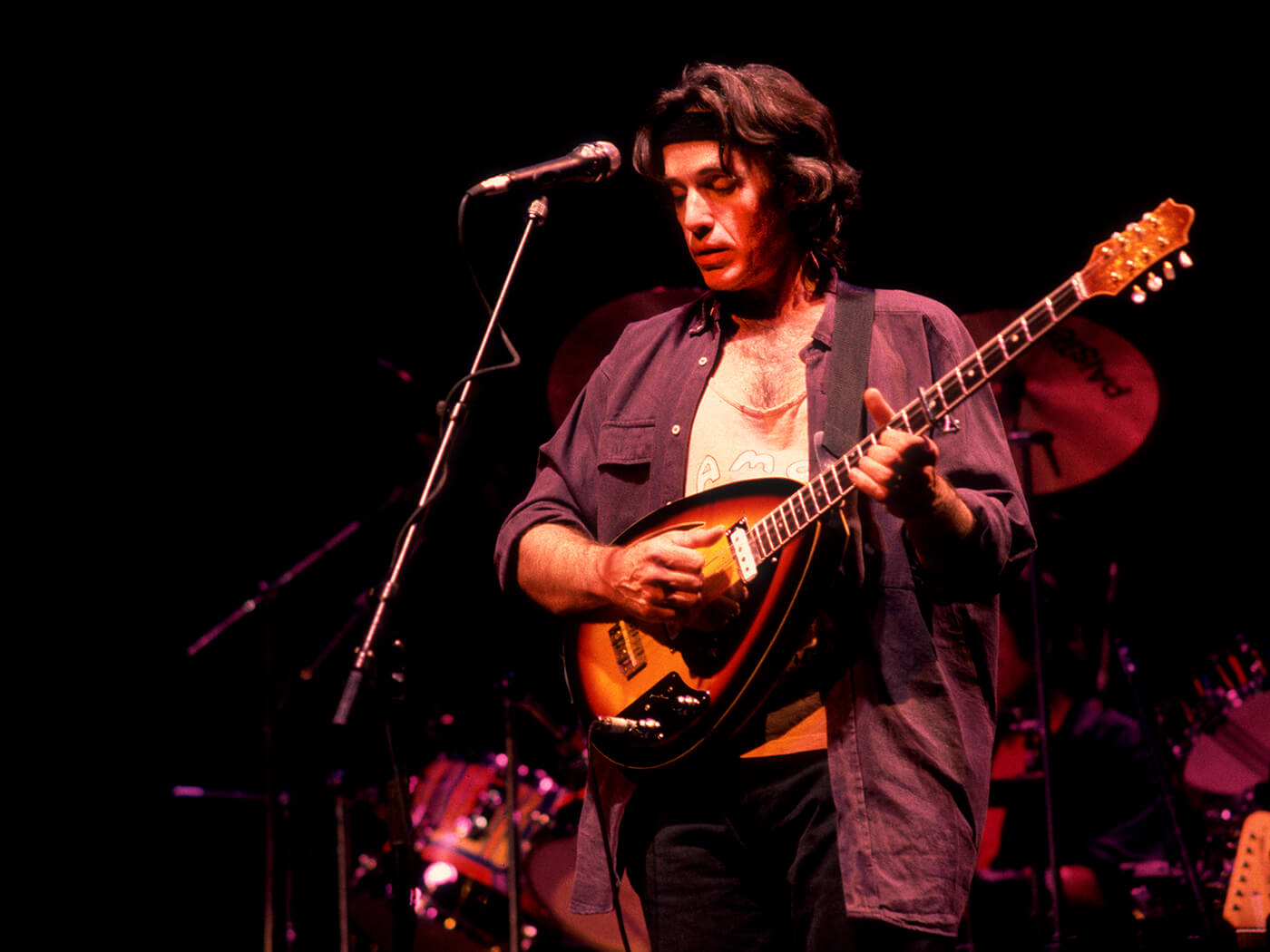 A meeting in Santa Barbara

Think back to the last impromptu, improvised jam session you had with a stranger. If it was recorded, it’s fair to say you might feel reticent about releasing it in its entirety, without overdubs or editing. If you did release it, you’d probably not expect it to go on and sell 200,000 copies… and you might also concede that, on the whole, its chances of winning a Grammy Award would be fairly slim.

Yet all of this happened with A Meeting By The River, a magical 1993 collaboration between US slide guitarist and musicologist Ry Cooder and Vishwa Mohan Bhatt, a virtuoso Indian classical player of the Mohan Vinã – an archtop instrument that he designed himself, which is played lap-style using a cylindrical steel slide.

The collaboration came about after Ry’s friend, Alembic luthier Rick Turner, had heard an earlier recording by Bhatt. He suggested that engineer Kavichandran Alexander send a copy to Cooder. The impressed guitarist arranged a session for September 1992 to take place in Santa Barbara with himself, Bhatt and a percussion section of Sukhvinder Singh Namdhari on tabla and Cooder’s 14-year-old son, Joachim, on doumbek, a Middle Eastern drum. Alexander was invited to record the spontaneous outpouring; in his liner notes, the engineer said the musicians approached the session “with no planning whatsoever, and no preparation”.

Cooder had already completed 10 hours of film scoring in his hometown of LA before driving west along the coast for an hour to Santa Barbara, where he met Bhatt in a motel lobby. Within half an hour, the musicians were sat barefoot together on a large Persian rug in the city’s Christ The King Chapel, instruments at the ready.

Though the session that followed was fully improvised, it did at least have a framework to draw upon: a fable of friendship by 13th-century Persian poet Rumi that describes a frog and a mouse who meet on a riverbank to share stories, dreams and secrets. 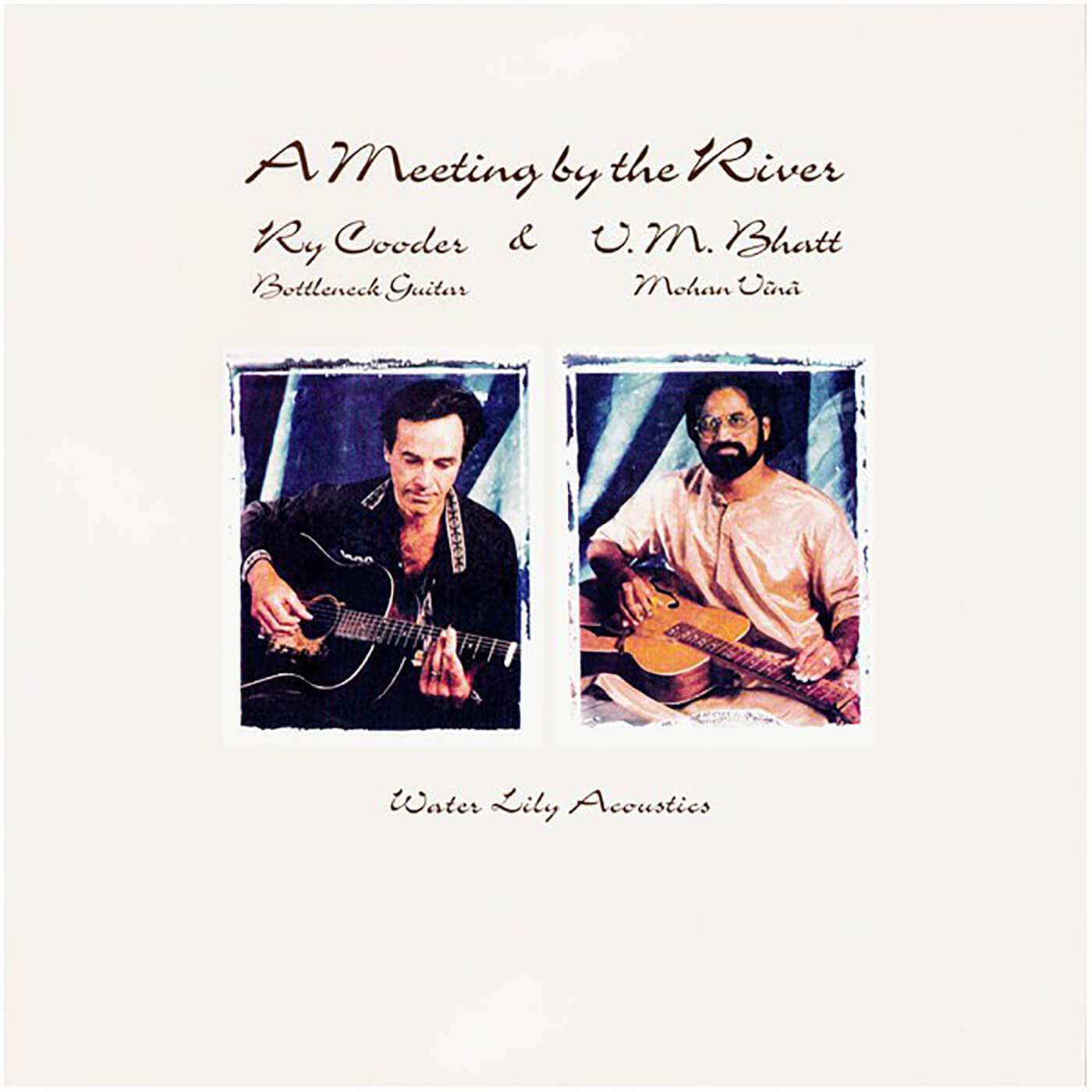 One for the audiophiles

A Meeting By The River is universally praised for the authenticity and realism of its recording and its 2008 vinyl release is often cited as audiophile-quality reference material. The session was captured using two customised valve mics in a Blumlein-array arrangement into a converted Studer two-track analogue tape recorder and the louder you play it, the more every rattle and scrape of slide on fingerboard and every microtonal flurry draws you into its rarefied, spontaneous atmosphere.

The qualities of the instruments themselves play their part: the Mohan Vinã – with its hollow, f-holed body, its neck modified to incorporate three melody strings (two steel, one bronze), five drone strings and an auxiliary neck with 12 sympathetic drone strings running alongside it – has a rich and articulate voice capable of biting attack, haunting shimmers of sympathetic resonance and sustaining harmonics. Cooder’s pitch-perfect slide-and-doublestops technique makes for a perfect match, his mastery of acoustic dynamics, unrivalled vibrato and slide vocabulary being pushed beyond the limits in this stark context.

Aside from the analogue artistry of its acoustics, the album is also as pure and uninhibited an example of empathetic collaboration as you’ll find anywhere: a musical conversation that begins respectfully before the musicians incline towards each other’s ideas, feeling out the areas of crossover between them with a depth that goes far beyond pure mimicry. Engineer Alexander describes the session in these terms: “The musicians soon established a dialogue through which they could probe each other so as to know where the bends in the river were going to be, or how deep, or how swift the waters.”

The fluid, open structure of second track Longing showcases how both players use insistent, repeated notes as gentle nudges, a way of signposting each other to expand on a general theme. Ganges Delta Blues provides a more direct example where, with their initial improvisations dangling by a slender thread, at 1:29 Cooder tremolo-picks a rising blues-scale pattern; Bhatt picks up on it halfway through and mirrors its ascending tension. They both build to a crescendo, and the beat comes in as they resolve to the Eastern-flavoured Delta refrain of its title.

Final track Isa Lei, based on a Fijian farewell song, structures its improvisations around a hymnal chord progression, punctuated by Q&As from Cooder and Bhatt. Eventually, the latter simplifies the song to a three-note melody bookended by a descending motif: through accompaniment as well as by taking the reigns, each player negotiates the outcome to ensure they meet halfway.

A Meeting By The River won the 1994 Grammy Award for Best World Music Album and its success spurred engineer and Water Lily Acoustics head Kavichandran Alexander to record many more musical pairings. V. M. Bhatt recorded a series of further collaborations with Jerry Douglas and Taj Mahal, among others, while Cooder went on to record one of world music’s most successful albums of all, 1997’s Buena Vista Social Club. He said of that project that “musicians understand each other through means other than speaking”, and A Meeting By The River is among the finest examples of what he means: two strangers from different cultures, united only by slide and strings, telling an unfolding story about the language of musical collaboration.