The Genius Of… Dookie by Green Day

A staple of the CD collections of 90s teenagers, Green Day’s Grammy-scooping major label smash confirmed the East Bay three’s songwriting might – and paved the way for a decade’s worth of imitators.

The hallowed halls of all-time great guitarists typically only let in those skilled in dexterous soloing, invigorating riff-writing and all-round instrumental finesse. But, let’s be honest, the number of kids picking up their first guitar, with their sights set on being the next Billie Joe Armstrong easily tops those aspiring to be Steve Vai.

Green Day’s credentials as key instigators of the mainstream uptake of pop-punk is well documented, yet the band’s major label debut, 1994’s Dookie, bore little resemblance to the crude, freshman antics of the genre’s later key players. While the album’s cartoonish cover (and scatological title) might have signalled a carefree, blazed humour, the depths of the fourteen songs within revealed a band with world-beating potential.

Prior to pop-punk’s American Pie-ification, Billie Joe Armstrong, bassist Mike Dirnt and drummer Tré Cool were penning songs that drew on the darker side of both their internal and external lives. Dookie was primarily set within a broken landscape, rife with dropout-ridden slums and penniless destitution, balanced with a heady quantity of apathy and self-loathing.

Formed as teens back in 1986, Green Day had already found cult success on the Bay Area punk scene, but after Nirvana’s Nevermind exploded its way into the mainstream consciousness, major labels were eagerly hunting for the next troupe of guitar-toting chart-invaders. As adherents to the scene’s DIY ideals, the band had typically shrugged off any major label interest. Until A&R man and producer Rob Cavallo offered to both take them on, and record them for the Warner-owned Reprise Records.

It all keeps adding up

Controversially ignoring the punk fundamentalists, the three opted to take a chance with Cavallo, who had earned their respect. Green Day tracked their major label debut at Fantasy Studios in Berkeley, California over a three-week span. In the vein of the Ramones and The Sex Pistols, Armstrong’s guitar approach prioritised swerving major chords, often rhythmically palm-muted, while Mike Dirnt’s dexterous bass work melodically augmented his adroit chord sequences.

An early, striking example of Dirnt’s melodic centrality could be heard on the fourth track – and the band’s debut single – Longview. A laconic walking bass-line in E formed the verse’s bedrock, over which Armstrong delivered a self-deprecating lyric, decrying his own boredom and lack of motivation, all leading up to a hard-hitting power chord assault in the chorus. 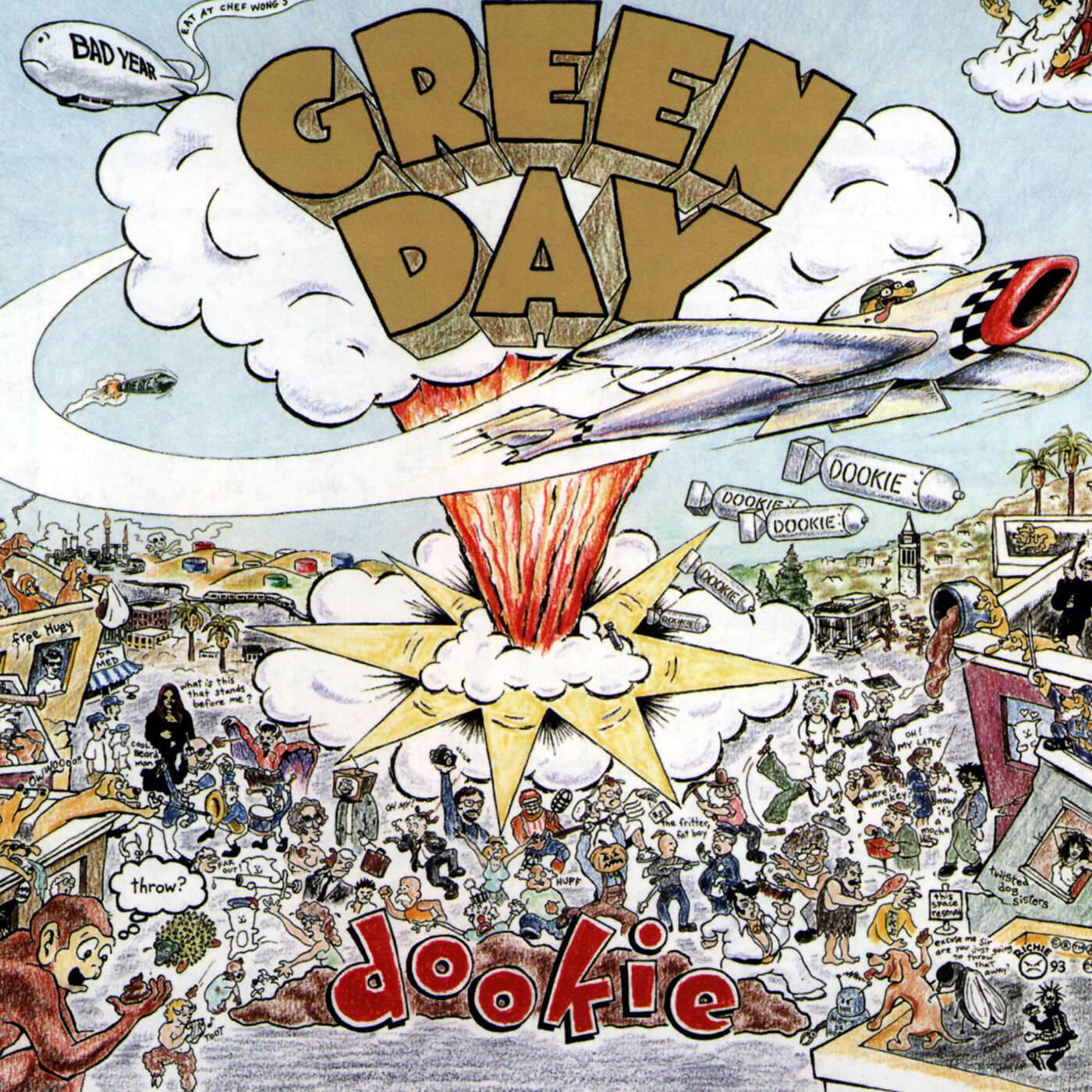 From the moment he received it for his tenth birthday, Armstrong had rarely been seen without his signature, iconic guitar, ‘Blue’. A Stratocaster copy made by Japanese manufacturer Fernandes. Over the years, Armstrong had augmented the instrument with a Seymour Duncan humbucker, and daubed it with photos, band stickers and his initials. It would be the only guitar used to record Dookie, aside from a Harmony Stella Parlour acoustic, used for the quiet introduction of explosive closer F.O.D.

Working on a larger budget allowed Armstrong the ability to explore more amp choices at Fantasy. Previously reliant on a Gallien-Krueger 250RL head, Billie Joe was now in search of the fattest rock sound he could muster. “We were just trying to go from loud to louder.” Billie Joe explained when interviewed for the launch of MXR’s Dookie Drive pedal. A 100-watt Marshall Plexi 1959SLP, nicknamed ‘Pete’, provided just the sort of ear-splitting overdrive that he was looking for. “You can really hear it in a song like She, where the verse goes, right when it kicks into the chorus, that big heavy guitar with more distortion comes right out the middle.” Armstrong told MXR.

Search the world around

Armed with this tougher guitar sound, Armstrong was keen to revisit a highlight from their previous album Kerplunk, and fattened-up the springy favourite Welcome to Paradise. Its buzzsaw central riff was a repeated, crowd-pleasing refrain that punctuated a tale that documented the grim underbelly of West Oakland, based on Armstrong’s own experiences after leaving his parents home.

Elsewhere, the pained When I Come Around revealed their emotional articulacy, as Billie Joe delineated his commitment issues atop a cycle of four stadium-sized chords. The songs’ cinematic breadth now a far cry from the lo-fi trappings of their independent work.

It wasn’t just these two powerhouse singles, Dookie was fit to burst with sublimely written pop-punk songs, bristling with both melody and intensity. From the propulsive manifesto-like opener Burnout, via the feminist-poem inspired savagery of She, the short sharp admission of bisexuality on the confessional Coming Clean and the record’s ultimate explosive culmination on F.O.D., Dookie re-drew punk’s foundations, transforming that hallmark anger and venom inward, and resultantly landing well with a generation. The album resultantly hit number two on the Billboard Top 200.

Leaving the small-town ideals of their peers, and steering their ship toward a vaster ocean certainly paid off. When released in early 1994, Dookie bottled the anxieties and insecurities of a world’s worth of teenagers, who collectively came of age across the next decade (and beyond). They found validation in this now-foundational record’s fragmented sketches of Armstrong’s own metamorphosis from boy to man.

Perhaps more crucially, Armstrong’s no-frills power chords gave many youngsters the confidence to pick up their first guitar, have a crack at Basket Case’s galloping power-chords. What better mark of a hero is there than that?