The Genius Of… From Here To Infirmary by Alkaline Trio

When punk went fully pop in the early 2000s, a trio of misanthropic outcasts with a flair for the macabre came along for the ride.

​During the final of the recent Snooker World Championship, Mark Selby lined up a red into a corner pocket as the camera caught another flash of red in the crowd: a fan’s Sum 41 t-shirt. “Old-school punks repping at the snooker,” one Twitter user posted alongside a screenshot. Old-school? Yeah, honestly, old school. It’s been 20 years since punk went to the mall, and you’re circling the drain.

As far as punk years go, 2001 doesn’t hold the same gravitas in the public consciousness as 1977 or 1994. But it’s wild to look back at the records – specifically from the pop-punk realm – that emerged back to back to back during those 12 months. Blink-182 shifted a couple of million copies of Take Off Your Pants and Jacket. Sum 41 delivered the optimistically titled, All Killer No Filler. American Hi-Fi were a thing. People listened to Fenix*TX and the Ataris and Rufio and Sugarcult. The American Pie 2 soundtrack was the zeitgeist, dude.

Whenever the tides change like this, some weirdos get dragged along in the undertow. That’s how Alkaline Trio – three Chicagoans who tapped into twin veins of American punk history by splicing boozy midwestern misanthropy with schlocky goth staging – came to form part of this moment with their third album From Here to Infirmary. “I was just a stupid kid back then,” Matt Skiba sang on its lead single. The bands they were grouped with were largely stupid kids at the time.

Alkaline Trio formed in the mid-90s, pooling together from bands you haven’t heard of and, in the case of bassist Dan Andriano, a couple you have: the well-regarded, short-lived emo group Tuesday and the well-regarded, short-lived ska-punk group Slapstick, whose famed ‘family tree’ of members would also go on to play in the Lawrence Arms, Less Than Jake and the Honor System, among other outfits. They hit creative paydirt immediately with 1998’s Goddamnit, an LP that Asian Man Records founder Mike Park still views as the label’s finest.

Its ramshackle sound – irrepressibly hooky, filled with lurid horror movie imagery and defined by Andriano and Skiba’s snaking dual lead vocals – is both lo-fi and vibrant, teasing out the doomed romance of its lyrics by sounding like it might collapse in on itself. In 2000 they followed it with Maybe I’ll Catch Fire, where an anthemic streak began to appear on songs such as the foul mouthed screamalong Radio. The original trio splintered amid bad vibes with the exit of drummer Glenn Porter, whose replacement, Mike Felumlee, added another layer of Chicago lore following his time in Smoking Popes.

From Here to Infirmary represented a further series of shifts both creative and practical. Alkaline Trio left Asian Man for Vagrant, a label on a rapid ascent after rolling the dice on the Get Up Kids’ era-defining emo masterpiece Something to Write Home About in 1999. They also left Atlas Studios in Chicago in their rearview as they decamped with long-time producer Matt Allison to Pachyderm Studios in Cannon Falls, Minnesota, where Nirvana made In Utero and PJ Harvey tracked Rid of Me within 12 months of each other back in the early 90s. “The place was haunted as shit, and we had so much fun making the record,” Skiba told Vice’s David Anthony in 2018. “I love the songs, I had a blast making it. Matt produced that record, Jerry Finn mixed the record.” 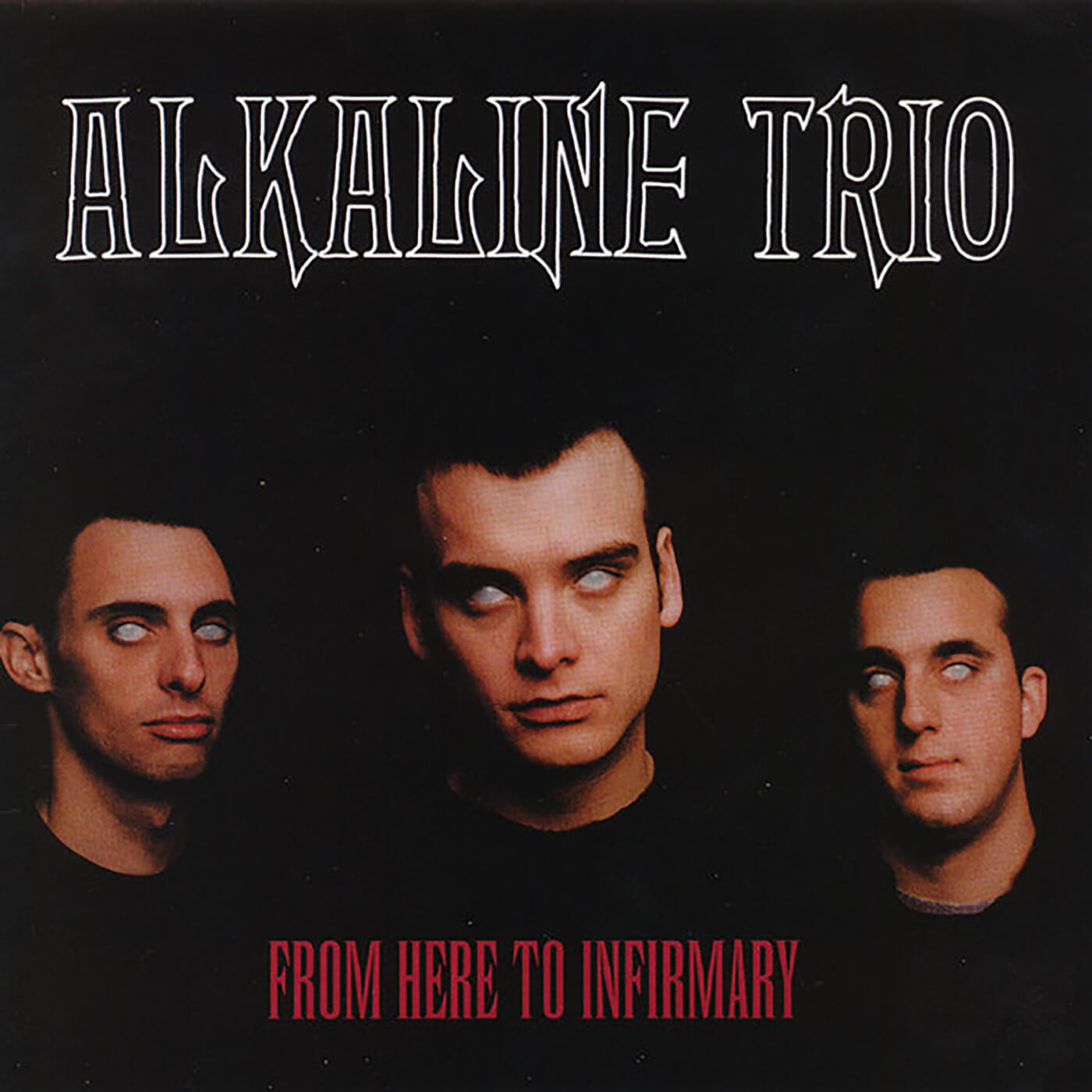 Perhaps unsurprisingly, this all rubbed off on the finished product. From Here to Infirmary is altogether cleaner and tidier than its predecessors, and stands as a breakwater in Alkaline Trio’s discography. Naturally, that pissed the punk kids off, who saw it as cashing in on the commercial pop-punk boom. But, let’s be real, the songs sound killer. Skiba and Andriano’s crisp melodies benefit from the refined presentation, and its octave riffs, loud and proud in the front of the mix, are scalpel sharp.

Skiba is a driving, riff-forward player (he’d begun playing a ’57 Reissue Les Paul Goldtop around 2000) and with songs like Private Eye, Trucks and Trains and Mr. Chainsaw he fused Alkaline Trio past and present, gouging space alongside massive hooks while sparring with Andriano’s wandering bass. There is a sense of balance here that has slipped free from the band’s grasp at times during the past two decades.

From Here to Infirmary landed at 199 on the Billboard 200 upon its release in April 2001, and it has sold upwards of 100,000 copies on home soil. It’s not the sort of music that’s traditionally well-reviewed, but it held its own in that regard. “They deliver catchy punk pop with sharp elbows and a wry sense of humor,” was Rolling Stone’s take. Peak-snark Pitchfork: “There’s quite a bit that Alkaline Trio’s music is not. It’s not challenging, ambitious, or visionary. It’s not clever or self-aware. It’s not even terribly skillful. But what it is, is tasty. Pure musical junk food: fast, greasy, and crafted for a general palate.”

Crucially, the record sonically and financially laid the groundwork for Good Mourning and Crimson, altogether more patchy and adventurous releases, without sending Alkaline Trio flying too close to the sun. They might not have shifted as many units as their more easily digestible sort-of peers, but they also survived. So, chalk that up as a win in a bloody contest.

Felumlee wasn’t long for their world – being replaced by now longtime sticksman Derek Grant almost immediately after the album was finished – but Alkaline Trio are still an intriguing prospect all these years later. Their most recent full length, 2018’s Is This Thing Cursed?, was released following solo ventures and Skiba’s recruitment by Blink-182 to replace Tom DeLonge, and it slayed. It was packed with great songs about death, drinking and being kinda weird. Some things never change.